Mr. President, Why Are You Gnawing On The Ambassador's Head? 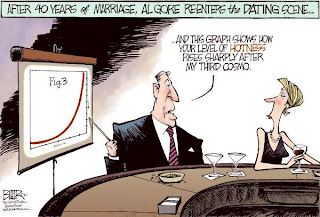 Well, the Gore marriage is over.

Norma and I have been chatting back and forth about this for a couple of days. Al and Tipper (what kind of name is Tipper?) are ending their marriage after forty years.

At this point in the game... why? After forty years, why not stick it out? By this point, you can finish each others' sentences, know exactly what the other is thinking, and even if you're tired of each other, both of you are losing your hearing and don't have to listen to each other prattle on.

For those who don't know, Gore's Harvard days included a stint with Tommy Lee Jones as a roommate. I suspect Mr. Jones, being overabundant with personality, managed to somehow survive the personality black hole that is Mr. Gore. Or did Tommy somehow siphon off any residual personality Gore might have had?

The former vice president isn't known for his engaging personality. That's probably because he doesn't have one. Oh, come on now. We all know it. The man is as interesting as watching paint dry. No, on second thought, watching the paint's not as dull. Norma wondered if Tipper would even notice him if they're still in the same house, and suggested that she might not realize he'd be dead until the corpse started rotting.

One word: zombie. I would propose to you that Al Gore wanted to be the first zombie President of the United States. Too far a leap in imagination? How else do you explain his lifelessness? His general grey palour? The brains he's chewing on right this moment?

Count yourselves lucky he didn't become the President of the United States. Could you imagine Al Gore attacking the Speaker of the House on the night of the State of the Union, tearing out his guts and feasting on his entrails on live TV?

Posted by William Kendall at 3:53 PM