Driving A Stake Into Team Edward

Well, apparently I didn't know well enough to leave certain things alone, did I? This one's going to get a few people unhappy with me. I'm talking torches and pitchforks kind of unhappy.

I've taken shots at some classic films as of late in blogs. Now it's time for a not so classic film, its sequels, and the books they came from.

Yes, it's time for Twilight.

Stephenie Meyer went and created this series of vampire-meets-girl novels that passes off what might be described as predatory behaviour as love. Its primary audience, thirteen to fifteen year old girls, seems to love it. It's already been turned into two films, with two more yet to come.

Somehow I managed to ignore the books. After all, I'm not the primary target audience, am I? Twilight was something that was out there on the periphery. Sure, I was aware of it, but did I care? Of course not.

So they made the first movie, cast with a whole lot of gloomy people, and filmed in some very gloomy places. Lots of girls and women went to see it. News footage featured the target audience of girls screaming like banshees while wearing Team Edward shirts. Anyone who wasn't part of the target audience might happen to shake their heads with dismay.

It wasn't until the movie showed up on DVD that I saw it. I borrowed a copy (despite my better sense), set it in the player, started watching...

And it became an ordeal to watch. This is what all the fuss was about? A very gloomy teenaged girl, Bella, is sent off to live with her police officer daddy in the very gloomy Pacific Northwest, where she attends high school. And catches the attention of a very brooding fellow, Edward, who needs a tan. I mean, really needs it. Apparently in this vampire universe, the vamps don't burn up in sunlight. They just don't like it. A pity, really, because Edward and his whole family and every vampire in the franchise could really benefit from becoming a pile of cinders. Scratch that. We as readers or viewers would benefit. That way there would be no Twilight! I wouldn't have wasted a couple of hours of my life watching this interminable nonsense about the brooding vampire and his one-expression girlfriend....

Obviously I didn't like the movie. When it was over, I knew I had no interest in ever watching a sequel, or reading the book. I mean, really. Vampires have been done well before. I kept wanting Bram Stokers' creation to come on in, rip out the throats of every single emo-vamp infesting the movie, teach them a few lessons about how vampires should accord themselves. I wished James Woods would show up and start unleashing all hell on the Cullen family (a lousy John Carpenter movie, but at least Woods seemed to have fun chewing the scenery). I wanted Angel and Spike around; they're at least fun! And really, couldn't we have Buffy come on in and stake the Cullens? Please? And while she's at it, have her smack a smile onto Kristen Stewart? The poor girl seems unable to smile.

Oh well, we can't always get what we want, can we? Instead, we've got two more of these films to come (unless the last book is divided into two films for some inexplicable reason). We've got more legions of screaming girls yelling about Team Edward or Team Jacob. We've got devoted fans of the books and movies calling for the heads of anyone who dares criticize their beloved Twilight (note to self: get the kevlar on). And we've got Robert Pattinson and Kristen Stewart typecast for life. Unfortunately we don't have a good alternate ending where every single character in the books die. More's the pity.

I'll close with this thought. Pattinson was in another film a couple of months back, and while he wasn't playing the vampire, just one look at the trailer was enough. They were making him brood. And brood. And brood some more. Obviously channeling his inner Cullen. I, meanwhile, was feeling nauseous. Good luck, Mr. Pattinson. This is going to be your modus operandi for the next few years.

By the time the fourth book is under way for production, he could be well sick of all the attention and the screaming fans. So imagine this moment on the set.

Director: Robert, you're not brooding enough. You have to brood some more. And look really broody while you're brooding. Team Edward is counting on you.
Pattinson:  Oh, f*** Team Edward!!! 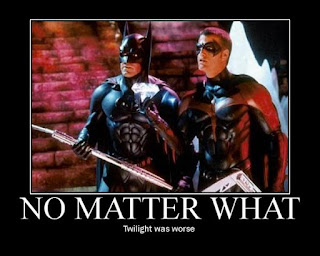 Posted by William Kendall at 3:49 PM