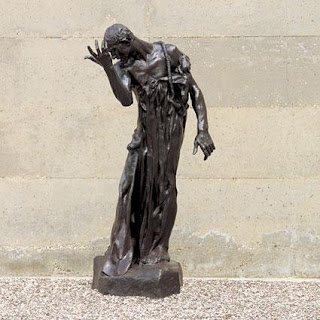 Auguste Rodin , French, 1840–1917
Pierre de Wiessant, Large Model , 1885–86
Bronze, 214 x 116 x 118 cm
Gift of the B. Gerald Cantor Art Foundation,
Beverly Hills , California, to American Friends of the Israel Museum
B88.0213
The Burghers of Calais , Rodin’s first completed major public monument, commemorates an historical event that took place in 1347 during the Hundred Years’ War. The king of England, having besieged the city of Calais, agreed to free the inhabitants if six prominent citizens would surrender to him to be put to death. The six walked to the king’s camp wearing sackcloth and halters and carrying the keys to the city. At the last moment, the English king’s wife interceded on their behalf and saved their lives.
Rodin portrays the six citizens as they are about to leave Calais. Each man expresses his own personal anguish. To heighten the dramatic impact, Rodin exaggerated the proportions of the hands and legs, and created strong contrasts of light and shadow. Rodin produced several hundred studies of the group, isolated figures, and parts of figures, recombining these elements until the six burghers became a cohesive unit. The individual figures were finished by 1888; yet it wasn’t until 1895 that the complete monument was unveiled in Calais. To Rodin’s dismay, the city council harshly criticized the work, as it was a depiction of human crisis rather than a heroic-patriotic statement.

Pierre de Wiessant is particularly impassioned. His bent head, furrowed brow, half-closed eyes, and parted lips express deep sorrow and apprehension. His enlarged, muscular limbs, and the dramatic gesture of his right hand amplify the emotional impact of the work and convey the burgher’s agony. Cloaked in the deeps folds of sackcloth, Pierre's twisted, elongated body and tragic face recall Gothic representations of Christ as the “Man of Sorrows.”
****
That's the explanation for the sculpture itself, taken from the Israel Museum website. Their words, not mine. So why did I bring it up? For a very simple reason. I was going through the site yesterday, in connection to Heaven And Hell, and a current day sequence set in the museum. I started exploring the site, and clicked on the Art Garden icon. The garden is an intricately designed place outside, with tree lined gravel paths that visit a series of sculptures. This Rodin is one of them.
It really spoke to me, I thought. The anguish of the expression is perfect. And so I went back into Heaven And Hell, to the prologue, where I altered somewhat the first conversation between two characters. They're at a gala opening at the museum, and meet. Before, I had them talking on a balcony, but somehow having them come out into the Garden, and come to this sculpture in particular, seemed just right. The anguish of the sculpture and the story behind it seemed to fit, given the anguish and broken hearts of these two people. And so rewriting slightly really worked for the moment between them.
Beyond that, the image is a haunting one. Norma suggested it might be just the sort of thing that would be suitable for cover art. I'd certainly have to agree. Writing that into the sequence, I was reading the passage. It's a powerful moment, if I do say so myself. Two unlikely strangers, coming together, pouring out their heart to each other, finding common ground in their mutual sorrow. Which is what leads me to this.

Cue the megalomaniacal laughter...
Posted by William Kendall at 3:45 PM