North Of The Border And Slightly Around The Bend

Tomorrow is Canada Day here in the land of the Great White North. It's traditionally a day of celebration, even if we're under the iron fisted rule of a schoolyard thug at the moment (had to get in a dig against the FrankenHarper monster).
Ottawa is ground zero for the festivities, and being a local, I'll be there scrambling about among the many thousands who crowd the downtown core for the first of July. And William & Kate are turning up too, their first official tour since that whole get together they did in April. Perhaps you saw it?
We'll try to behave ourselves. At least we'll do better then the Vancouver post-Stanley Cup fiasco, which still weighs heavily on our collective conscience...
Canada, second biggest country on the planet, and home to some of the most jaw dropping gorgeous scenery. And, of course, that means we must be represented by our national animal, the beaver, who spend their time building gigantic dams, making little beavers, and skating on frozen ponds, when they're not picking fights with dogs....
To my fellow Canucks, at home and abroad, Happy Canada Day! To everyone else, I will confirm for you now that yes, maple syrup does run in our veins with blood. It's a rather unique mutation of the species homo sapien canadianesis.
Posted by William Kendall at 12:35 PM 12 comments:

"Let him go. No law against shooting a dead body." ~ Lieutenant Columbo
"Thank you very much. Your vote of confidence is overwhelming." ~ The Grandfather, The Princess Bride
Last week, the great character actor Peter Falk passed away. While he spent time on stage and on the big screen in films such as Murder Inc., The In Laws, Tune In Tomorrow, Wings of Desire, and The Princess Bride, he was best known, of course, for his signature role as Lieutenant Columbo in the long running television movies from throughout the seventies to the more recent run that had started in the late eighties and went to 2003.

Just a quick peek, if you will, at the final scene of one of my favourite episodes, from the later series of television movies.... Columbo Goes To The Guillotine

The twist of the Columbo series has always been that the audience knows who the murderer is; the fun lies in seeing how this rumpled, seemingly clueless detective puts the pieces together and catches the killer. Falk made the role his own, giving us an eccentric character who often seemed oblivious to the way his behaviour grated on suspects. He had the look of a man who slept in his clothes, who just woke up five minutes ago and still seemed dazed.  Behind it all, though, was a crafty, clever brain, methodically putting the whole crime together, while driving up the blood pressure of his suspect.
My first proper exposure to Peter Falk the actor was in The Princess Bride, where he plays the grandfather, telling his grandson the story by reading the book (you're very smart, now shut up!). It was the later Columbo movies that first exposed me to the character. In fact, it's only been through DVD that I've seen the first run of shows (the parents love these shows, it turns out). With an impressive cast list of murderers (some of whom came back repeatedly) like William Shatner (Lieutenant. I. Did. Not. Murder. That. Star. Trek. Fan), Johnny Cash, Robert Culp, Helen Shaver, Faye Dunaway, Patrick McGoohan, and many more, the show was nonetheless centered on the rumpled detective, who, over the course of many years, became established as the definitive television detective.
There'll never be another one quite like him. Falk made the character into such a memorable one, to the point where trying to cast anyone else in the role would be a disaster. And unfortunately, in a television environment today where police procedurals tend to have federal agents flying around in luxury jets (Criminal Minds, I'm talking about you) or lab rats carrying guns and solving crimes (CSI franchise, I'm talking about you, you overbloated dinosaur triad. Is it so hard for that mumbling idiot in Miami to take his sunglasses off?).... the police detective seems to be almost an afterthought in the genre.
If only we could have seen Columbo take down the most sadistic murderer in television history...
I offer proof in her own words that Jessica Fletcher is the most dangerous serial killer of all time.


I'll certainly miss the great man. Peter Falk was one of the great character actors, and he gave the world one of the greatest television characters of all time.
Rest in peace, Mr. Falk. And thank you.
Posted by William Kendall at 11:19 AM 10 comments:

Newt, The Mama Grizzly, And The Weinie 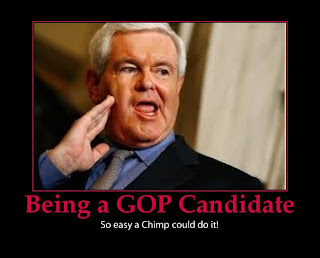 And so we return once again to the political field, with another look at the 2012 election campaign through the eyes of editorial cartoonists. First, though, if you haven't seen it, check out my guest blog at The Blog Entourage, where I blogged about a certain scandal that's run its course. At least we hope it has. 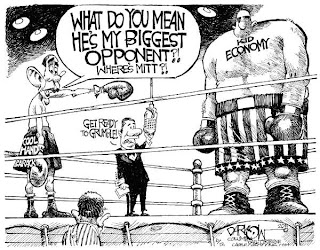 The field of candidates who'll run against President Obama next year is starting to shape up, with the Republicans running a slate of contenders for the nomination, some of whom are buffoonish, others of whom are the sort who'll put us all to sleep. Maybe that's the idea.
There's Mitt Romney, of course, he with the weird name. Mitt, did your parents lose a bet when they got to giving you a name? Or did Dad really, really like baseball? 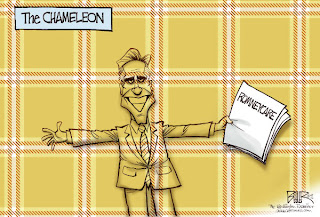 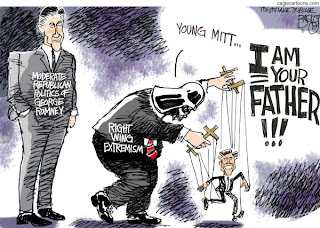 As much as we'd like to, we can't ignore the Mama Bear from Alaska.... 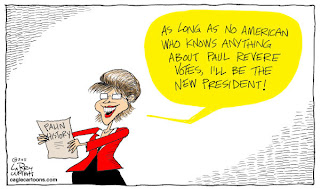 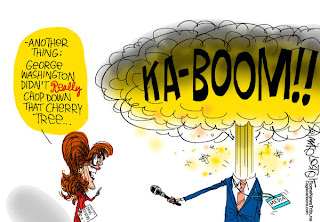 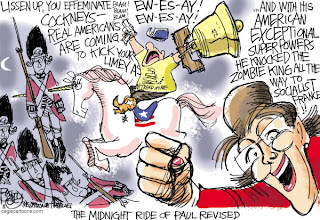 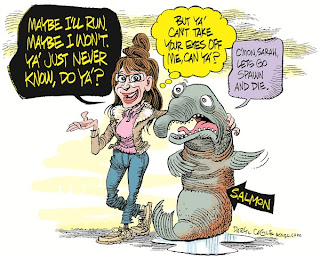 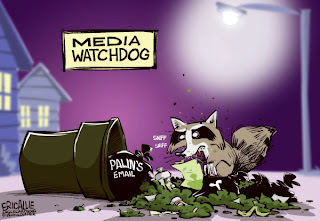 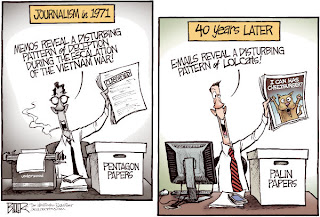 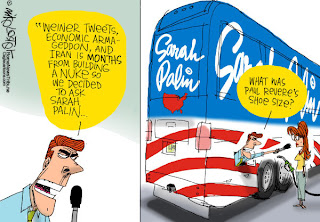 And then there's Newt Gingrich, whose latest kick at the political can seems to be coming to a screeching halt even before it can really get off the ground.... 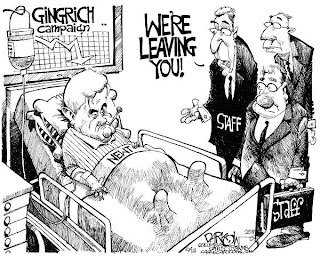 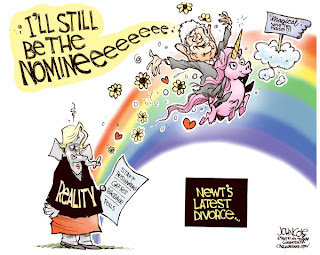 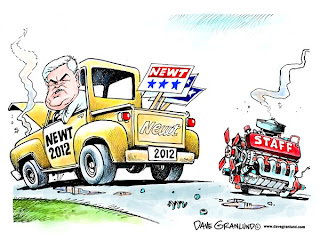 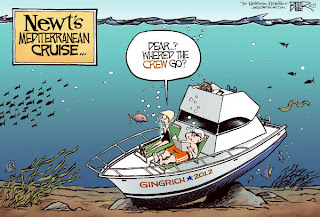 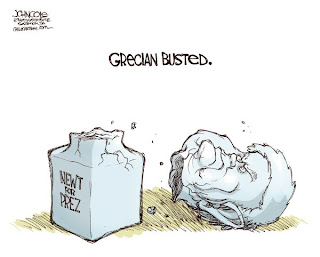 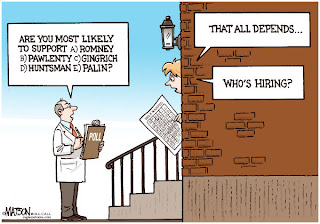 Yes, what could possibly go wrong?
Round up twice the number of usual suspects! 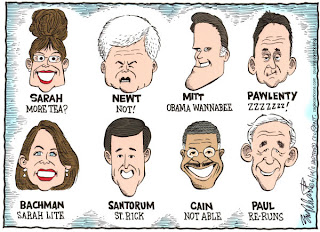 Whichever candidate finally rises up to get the nomination, I think it's safe to assume that on the Democrat side, there's one politician who has torpedoed his political career for once and for all time. Yes, Congressman Weinie... er, Congressman Weiner, I'm talking about you. 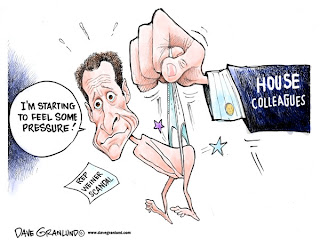 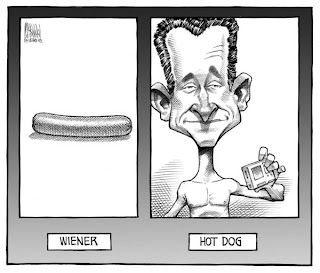