Excerpts From The Lost Diary of Amelia Earhart 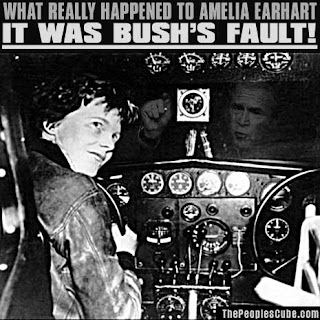 Found! The lost diary of aviatrix Amelia Earhart, lost in 1937 during flight around the world! Contains shocking revelations and juicy tidbits!

"May 29, 1937: Preparations for flight. G.P. nervous as usual. Noonan griping about the plane. Electra in good shape. Feel confident.

June 1, 1937: Had goodbye sex with G.P. Started circumnavigation in Electra. Planning on making many stops as we go east. Noonan complaining about being away from home. Feel like complaining about not going through Europe, but hold my tongue. Noonan's a douche anyway.

June 14th, 1937: Wondering if anyone would miss Noonan if I toss him out the door over the ocean somewhere en route.

June 20th, 1937: Am in state of silent tension with Noonan, ever since calling him a douche.

June 23rd, 1937: Spent time in India. Glad to get away from Noonan. Had sex with a British diplomat. And his wife.

July 2nd, 1937: Departure for Howland Island. Noonan is in a snit. Expresses concern about radio navigation. Am wondering about fuel manifest. Will make note of it at Howland.

July 3rd, 1937: Crashed Electra yesterday. We are somewhere in the South Pacific. Much yelling and recrimination between myself and Noonan. Sitting on a beach now. Nice spot, but irritating to hear Noonan wailing all the time about never being found.

July 4th, 1937: Happy Independence Day! Not so much fireworks as more recriminations. Have caught fish and foraged in jungle for food. Noonan spent most of day crouched in the fetal position. Odd sounds in jungle, like whispers. Wondering if sun is playing tricks with my mind. Speculating on what Noonan would taste like grilled.

July 7th, 1937: Wondering if I'm hearing things. Whispers continue. Noonan deteriorating emotionally. Keeps rocking back and forth, claiming this is not happening.

July 8th, 1937: Noonan snapped. Came at me with a wrench. Had no choice. Bludgeoned him with a tire iron. Noonan did not survive. At least no more griping to hear. Forgetting bad sex with Noonan will take more time to get past.

August 5th, 1937: No sign of rescue. Noonan eaten. Heard more whispering. And sound similar to loud animals in jungle. Am wondering if I'm alone on the island. Note to self: bury Noonan's skeleton.

August 7th, 1937: Am not alone on island. Strange man appeared on beach. Blond haired white man. Warned me not to trust his brother, who looks like Titus Welliver some of the time. Man vanished before I could consider eating him. Wondering who Titus Welliver is.

August 17th, 1937: Saw strange thing while foraging in jungle: pillar of smoke rushing along a stream, accompanied by strange roar. Wondering if this is the brother I was warned about.

August 19th, 1937: Spent day wondering who will play me in the movie. Then wondering if I'm going mad.

August 24th, 1937: Attacked by smoke monster. Badly hurt. Do not expect to live out the day. Will hide journal.