T Is For Trial, Part Three 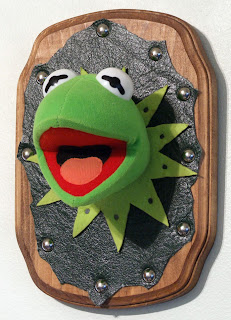 Legendary attorney Ben Matlock brought the people's case against accused murderer Grover to a close today, with two final witnesses. After several days of presenting his case, Matlock turned the onus over to his rival attorney, Kermit the Frog.

It's been a compelling few days, with the coroner testifying about the specifics of Elmo's brutal death, which left many in court queasy, particularly in viewing autopsy pictures. Only Inspector Lars Ulrich appeared stoic as the pictures were displayed; he's seen plenty of that in his time. Other witnesses called to the stand included Bert and Ernie, who testified about Grover's resentment of Elmo's hogging the spotlight, and longtime Sesame Street resident Gordon Robinson, who predicted that Elmo would be even bigger (and more lucrative) in death then he was in life. "Yeah, we're all going to be rolling in the dough soon!" Robinson declared with a pleased smile.

The final day's testimony hinged on two individuals. Daredevil Gonzo the Great testified about his own altercations with Elmo. "Look, the little bastard got between me and my Camilla, so I'm glad to see he's gone. Camilla found him adorable for some reason or another," Gonzo told Matlock. "Whoever killed him did the world a favour. But it wasn't Grover. He wouldn't hurt anyone."

Matlock looked puzzled, as if wondering why he had called Gonzo to the stand. Kermit cross-examined Gonzo, seemingly routine questions, until the last one. "Gonzo, is it true that you **** chickens?"

The final witness was a puzzling one. Beaker was called to the stand by Matlock, and sworn in by the bailiff, who had some trouble with the muppet. "State your name for the record," the bailiff instructed.

Beaker looked around in confusion. "Meep!"

Matlock intervened. "Your Honor, the witnesses' personal language structure is a little eccentric. Let it be said that the witnesses' name is Beaker and leave it at that." The judge agreed, and Beaker took his place in the witness box. Matlock smiled, walking over. "Beaker, tell me, what kind of work do you do?"

Kermit rose in objection. "What is the point of this testimony?" the frog demanded.

"Oh, no point," Matlock said in that laid back aw-shucks way of his. "I'm so confident that the defendant is guilty that I'm willing to waste the time of the court in having Beaker testify about nothing."

The judge instructed Matlock to sit down, and asked Kermit if he had any questions of the witness. Kermit nodded, and walked up to the lab assistant. "Beaker, do you believe Grover is guilty?"

"Let the record show that the witness shook his head. No further questions," Kermit declared.

And so the prosecution's case is at an end. Tomorrow, Kermit the Frog begins his case to save the life and reputation of Grover. And the woman known only as Karla continues her daily vigil in court, determined to see, in her words, her "sweet blue baby" cleared of all charges against him. 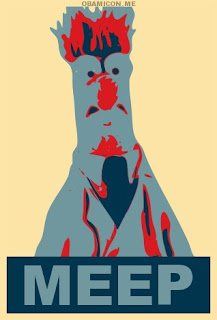 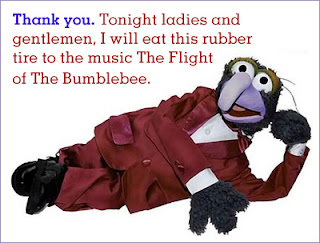 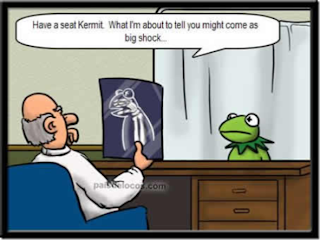 Posted by William Kendall at 11:52 AM