Rampage of the Behemoth Prime Minister

The city of Ottawa is safe tonight after the gigantic Stephen Harper was defeated in a stunning battle amid the ruins of Parliament Hill. After a two day rampage, in which much of the city has been trampled, Harper has been taken into custody. The Conservative party, robbed of their Prime Minister, boss, and resident tyrant, is in a state of shock. Needless to say, this doesn't make their reelection chances look good.

Before the confrontation, calls were made around the world for assistance. The Japanese government, asked if Canada could borrow Godzilla, politely refused, explaining that the giant lizard was at that moment occupied in battle with Mothra near Tokyo.

RCMP Inspector Lars Ulrich entered the fray late Saturday night. Reporters and police looked on as the giant Prime Minister was on the front lawn of Parliament, kicking CBC commentator Rex Murphy around like a soccer ball.

In a display of courage that astonished all, Ulrich singlehandedly saved Murphy, dragging him away from the giant Prime Minister. Harper was seen to bellow and roar, trying to dismantle the remains of the Peace Tower to use as a weapon. Ulrich seemed unfazed by the size of the monster.

The inspector walked across the rubble on the lawn, coming right up to the Prime Minister. He paused, looking up the full length of the beast. And then he kicked, with all his might, seeming to merely tap the ankle of the Prime Minister.

What happened next amazed the onlookers. The Prime Minister howled, as if in horrible pain. And indeed, his face had an agonized expression on it. He fell back, hitting the remains of the Centre Block, which collapsed beneath him. And then all was still.

Ulrich walked calmly away from the fallen titan. Reporters and police came up towards him cautiously. Reporters started asking questions, wanting to know how he had known what to do.

Ulrich smiled. "I got a call from former Prime Minister Chretien. He told me where the weak spot is in a giant Harper, so I knew where to kick. He was trying to tell everyone else, but do bear in mind that it's a little hard to understand Mr. Chretien. Take him away, boys."

One of the reporters pressed forward. "Lars! Now that you've done the impossible and vanquished the giant Stephen Harper, what are your intentions?"
"The Americans need my help to take down Giant Sarah Palin."

Another reporter, this one the co-anchor for ETalk, asked, "Lars! Will you and Metallica come play for us in our studio down in Toronto?"

Ulrich looked furious at the anchor. "Are you really this stupid?" he snarled, throwing a punch, and knocking the anchor to the ground. The inspector walked off, to the applause of the other reporters on scene. We can only say, having had seen Giant Stephen Harper fall, that Giant Sarah Palin is in a world of trouble. 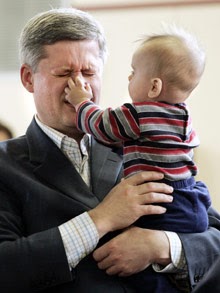 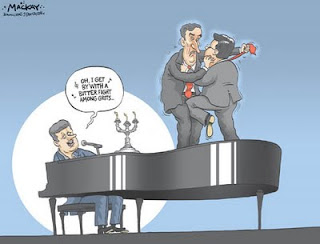 Posted by William Kendall at 2:50 PM