A Day In The Life Of A Drunkard Mayor

Back again to the infamous crack smoking Mayor of Toronto, Rob "Drunken Stupor" Ford. Can I just say that writing in his voice is a bit unpleasant? And by a bit I mean a lot. The sooner this monumental prick and his brother are removed from public life forever, the better.... 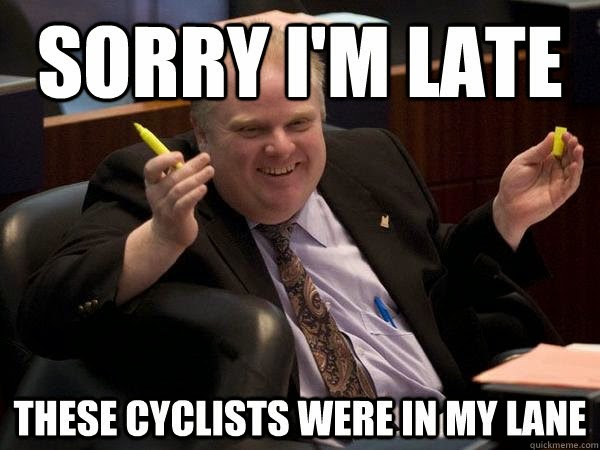 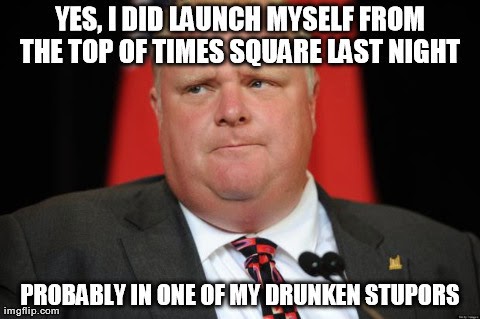 10:55 AM. Wake up out of deep sleep. Dreamed of having all my political enemies burned at the stake. That'd show those ****ers not to mess with ol' Robbie Ford. Hey, what happened to the alarm clock? 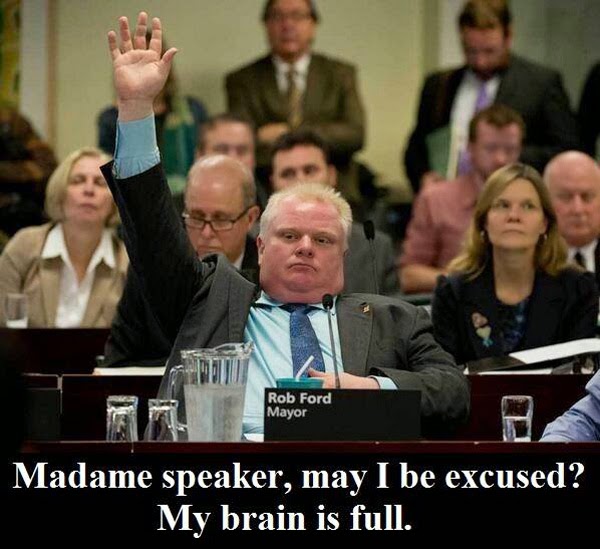 12:45 PM. Finally turn up at City Hall. Hey, I'm a half hour earlier than usual. I could've used that time to get more drinking in. I guess I'll just hide in my office and down a fifth of Scotch, light up some crack while I'm at it. Oh, crack, if I could marry you... 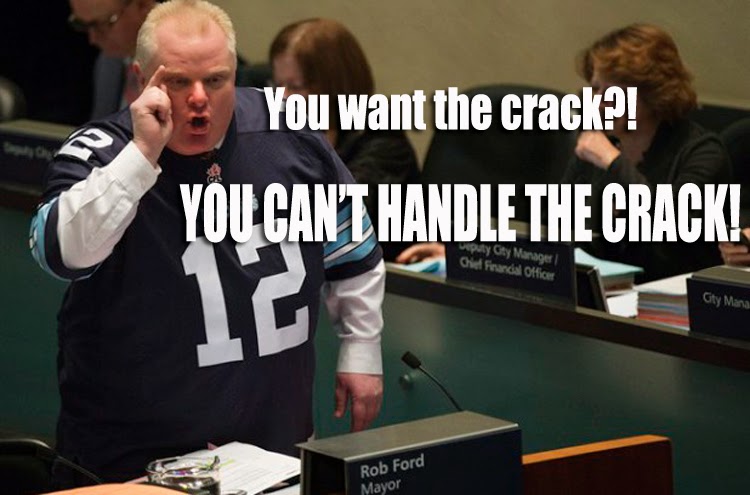 12:55 PM.  I get interrupted smoking crack when Dougie shows up at my office and tells me I missed a court appearance this morning. Oh, who gives a **** about that? The judges are all in on that big conspiracy against me, with the media and the left wingers and the granola eating downtown ****ers and the Premier and the Queen of England and the King of Spain and the Pope and the unions and the police chief. They're all out to get me, but Ford Nation will never stop loving me. 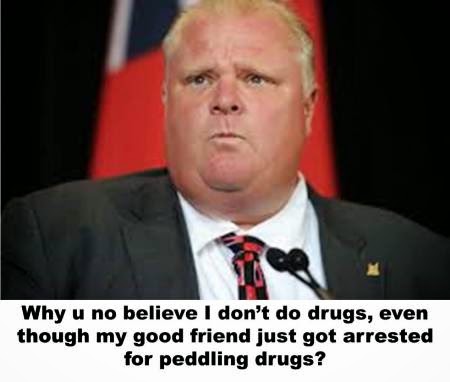 1:15 PM. Dougie gives me some peanut butter to chew on so I can conceal the smell of booze on my breath. That's what a good brother is for, always has my back. Time for that Council meeting, Dougie? Too bad we can't have all those councillors tarred and feathered and run outta town, right Dougie? Don't worry. Once we get ourselves into that whole world domination thing, we'll do just that. 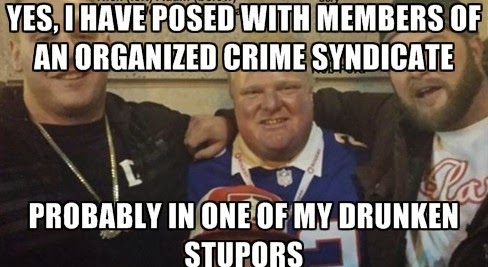 1:40 PM. Heckling that ****er while he's talking to the rest of council. Damn it, I could use a drink. Instead I belch loudly and laugh about it. The Speaker asks me to behave myself. 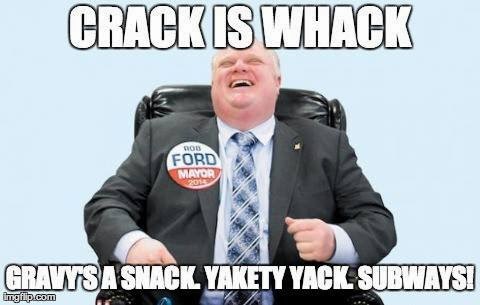 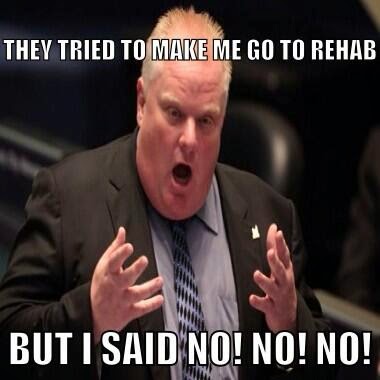 1:50 PM. Screaming profanities at that ****er Matlow and that other ****er Vaughn. I hate those two ****ers. Hate both of them. I wanna see them dead. I wanna burn their houses to the ground. They're just jealous of me. They know I'm a real classy guy and a lot better than they'll ever be. Yeah. Jealous. 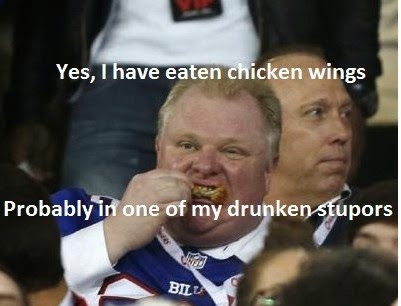 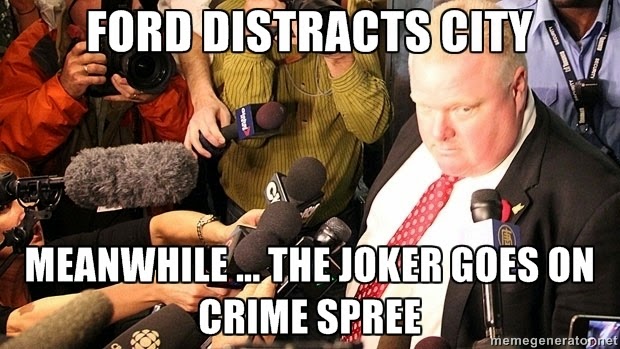 2:05 PM. Dougie's in with me and our new public relations guy. Cyrus is a great guy, salt of the earth, just like me. Plus he's a good source for crack. Got himself in and outta jail, but that's because the media and the police and all those left wing ****ers are out to get him just like they're out to get me. ****ers, the lot of them. When Cyrus was in jail, I had to ask that Bieber kid to score me some crack. Geez, I hope that kid doesn't inadvertently let that slip. I mean, he's a lot of fun to smoke dope with, but I don't think he can stand up to serious questions for more than five minutes. So Dougie and Cyrus and me are tryin' to figure out how to spin what happened in Council today. **** it, Dougie, I'll just go out there, give the press the finger, and kick their butts if they don't like it. 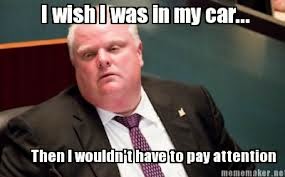 2:07 PM. The lawyer's laying down the riot act. I pretend to listen while rolling my eyes. Dougie's rolling his eyes too. Too busy brainstorming campaign slogans. King Of Crack. I Heart Crack. I Need More Crack. I wonder how those would play out in North York. 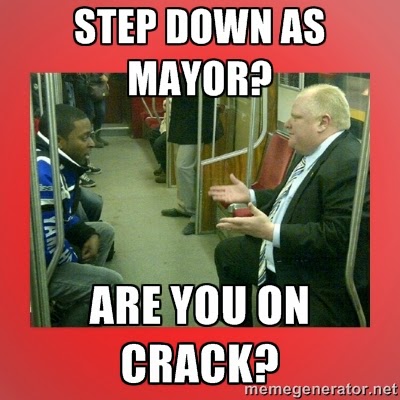 2:10 PM. Look, I'll make this simple. The people are on my side, except those left wing ****ers, but the silent majority will vote for me no matter what they tell the polls. They know my track record. Come October, I'm back in, and then we're gonna go ballistic on the rest of those ****ers in Council. I guarantee it. Never push a Ford against the wall, because we fight dirty, we know gangbangers who can break legs, and we believe in revenge. 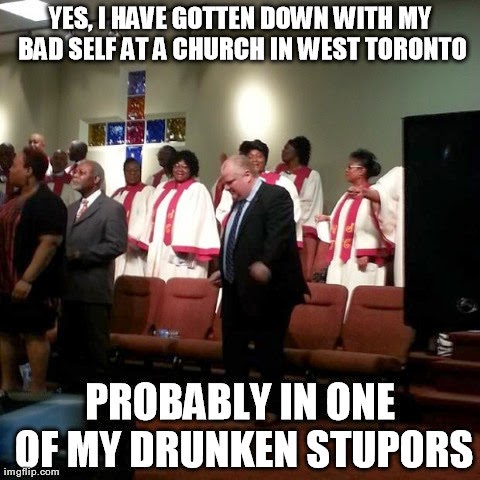 Well, I can pretend to be contrite and sincere and say it won't happen again. 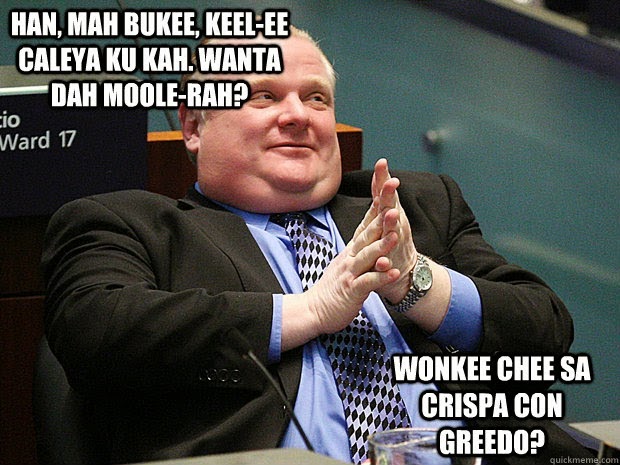 2:30 PM. Coming out to the press. I start to work my way through a statement, saying that I'm really sorry about what happened earlier, that I've been through a lot of stress, and it won't happen again. Look, the people elected me to do a job, and I'm in there working hard every day, and... don't interrupt me with questions, all right? You idiots know I don't like questions that dare sound critical about me. Hey! **** you!!!! 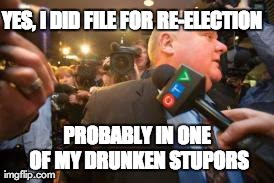 2:32 pm. Dougie and the lawyer drag me away from the media scrum. The lawyer mutters something about quitting working for me. Back into the office then. Need something to calm down. 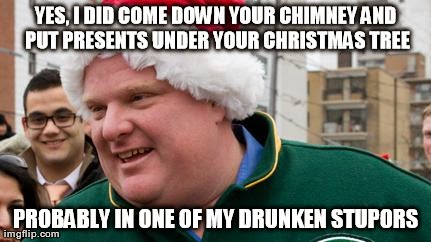 3:05 PM. That hits the spot. Nice bottle of vodka. Smoking some crack. All's good with the world. 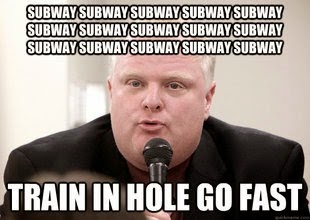 3:15 PM. Sneak out the back door while Dougie's got the media occupied. I need a drink. And I don't need a driver to get me where I'm going. I'm good to drive. 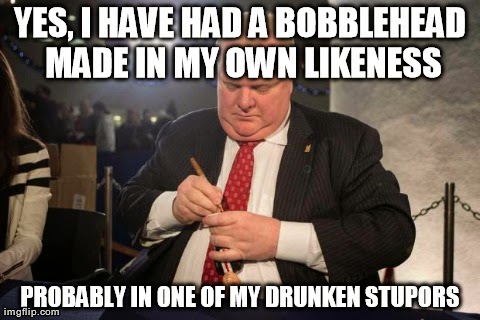 3:35 PM. Walk away from the SUV after plowing it into a barricade. Geez, I'd better not let anyone catch me here. 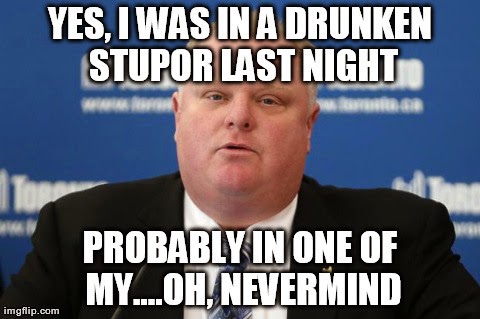 4:05 PM. Having a drink in the pub. Feeling woozy. Wonder if I hit my head in the accident. Maybe I'd better get myself checked out. 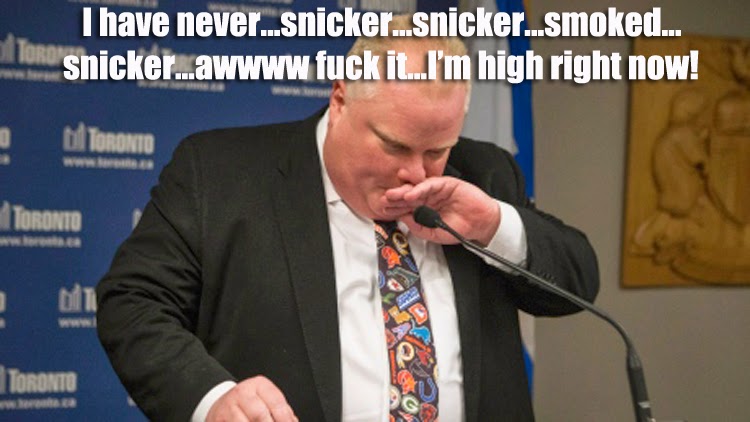 4:10 PM. Run into some guy in red out on the street while stumbling around drunk. Not sure what happens next. 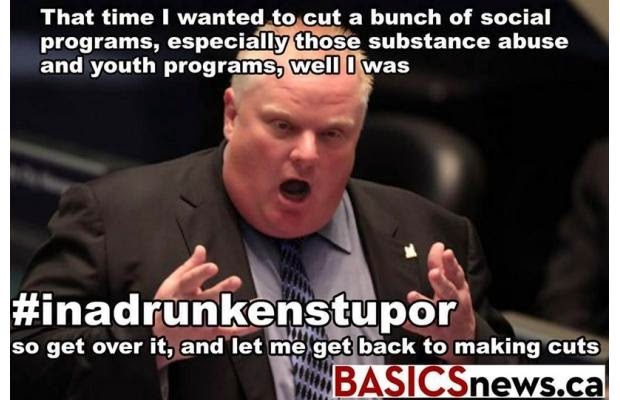 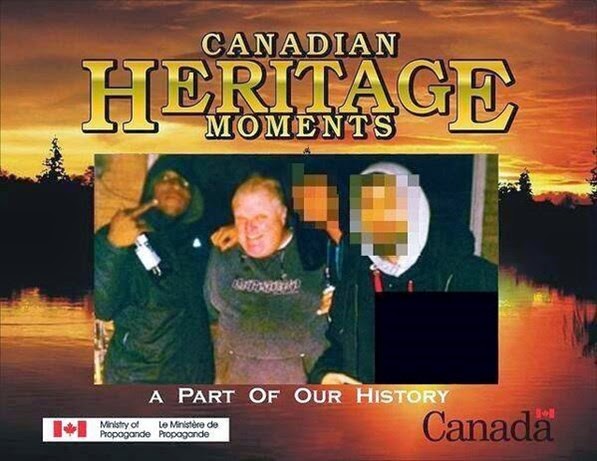 11:15 PM. Dougie comes to see me. Tells me I'll be out soon, but I've been charged with assaulting a police officer, driving under the influence, and public intoxication. I ask him how I got in here. He says I ran into a cranky Mountie named Lars Ulrich. What? Since when is the drummer for Metallica a Mountie?

Dougie tells me I mentioned that to him, took a swing at him, and he hit back. Dougie says the guy doesn't like it when people mistake him for the other Lars Ulrich. That explains why my face feels like it got clobbered by a sledgehammer. That guy didn't leave a mark on my perfect face, did he? Come on, so what if he was a cop? Doesn't mean he can arrest me! You and me, we hate cops from way back. Always doin' their jobs and arrestin' our buddies. Dougie, we gotta send a gangbanger to teach this **** Ulrich some ****ing manners. 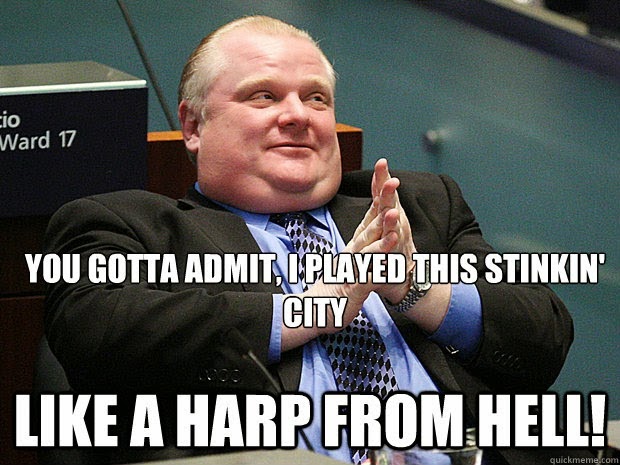 12:50 AM. Dougie and the lawyer march me out past a horde of reporters after making bail. They're all shouting questions. Way too loud. I've already got a hangover. Need more booze to make it go away. One of them asks when I'll finally quit the mayoral race and stop making an ass of myself.

Still not steady on my feet. Fall over and split my pants when I hit the pavement. Cameras going off. All of them catch sight of my Where's Waldo boxer shorts. 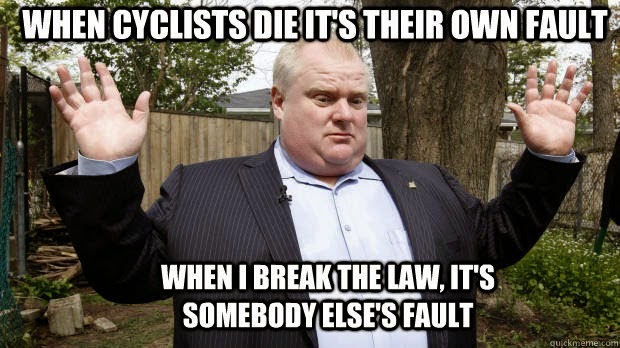 Posted by William Kendall at 6:00 AM

Email ThisBlogThis!Share to TwitterShare to FacebookShare to Pinterest
Labels: a day in the life, bad behavior, Canada, Lars Ulrich, Toronto