Some links to see to before we get ourselves underway. The Checkerboard Aussies have eight pups among their number. The Real Maple Syrup Mob post about sisters saying the weirdest things. Audrey the Majestic Feline figures into this blog. And yesterday was a Square Dog Friday, so go say hello to Hamish and Watson. Now then, a few days ago I posted this bit of nonsense. If you haven't read it yet, go check it out, because this might get confusing. 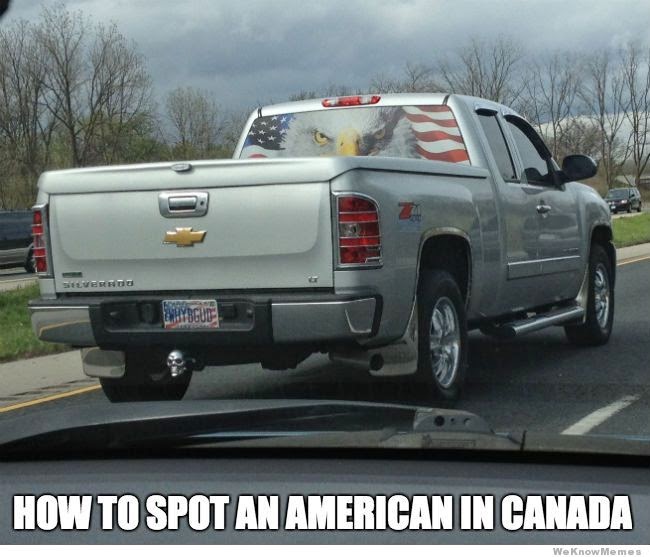 Calgary (CP) The trail of wreckage extends from Alberta's Rocky Mountains across the border into the United States. It is not the act of a tornado, but the result of an overblown radio political pundit spectacularly underestimating how dangerous one man can be. Last week, Rush Limbaugh, consistent winner of the Biggest Waste Of Oxygen On Radio Award for the last ten years running, urged his listeners to march into Canada to pick a fight with legendary RCMP Inspector Lars Ulrich. The notion did not go well.

Hordes of Limbaugh's fans, sometimes called dittoheads, poured across the border, bound for the detachment in the Alberta foothills where the Inspector is stationed. One by one, or in groups, they found the Inspector on duty. Some challenged him to a fight. Others simply struck first without saying a word. Each in turn got their butts kicked by the man who has repeatedly saved the world, and who is widely considered by many to be the most dangerous man alive, particularly when it comes to entertainment reporters.

"For the first few brawls, the Inspector thought this was little more than an odd prank," RCMP Constable Megan Borden told reporters from Calgary. "They barged into his detachment, started a fight, and he ended it in the way he usually does. The individuals in question were taken to the hospital in a variety of conditions, depending on how much they had annoyed the Inspector, and then charged with assault and weapons charges for bringing guns across the border. After a great number of these instances, the Inspector questioned one of his beaten assailants, and learned that Mr. Limbaugh had urged his followers to cross the border and pick fights with him. It seems Mr. Limbaugh believes the Inspector to be a communist. It is the opinion of the RCMP that Mr. Limbaugh is a complete bloody idiot." 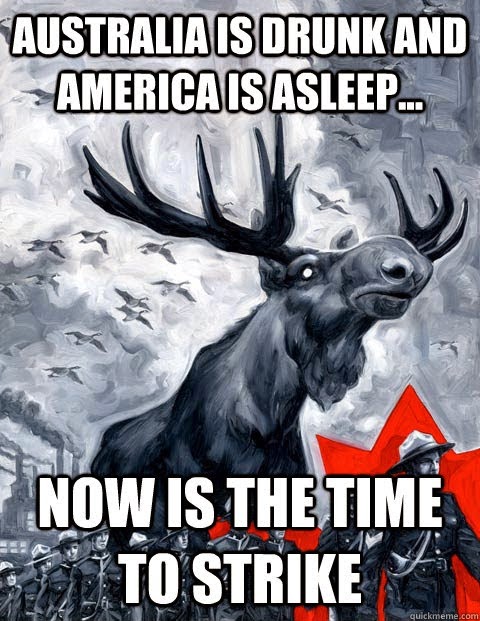 Armed with the knowledge that there was a reason he was getting into many more fights than usual, the Inspector set out for the nearest border crossing. Reporters have learned that he was brawling with groups of angry dittoheads along the way, all of them out to get him, all of them failing spectacularly to slow him down. Other Mounties arrested the fallen dittoheads in the Inspector's wake, taking some to hospitals for medical care. The dittoheads protested the notion of being in what they called a "communist-fascist" health care system even while receiving excellent medical care from highly qualified doctors and nurses who were more polite than they had to be. Borden, in relating to reporters this particular detail, rolled her eyes, commenting, "no one has ever accused the average Rush Limbaugh fan of being able to figure out what time of day it is, let alone process complicated differences in extreme political views." 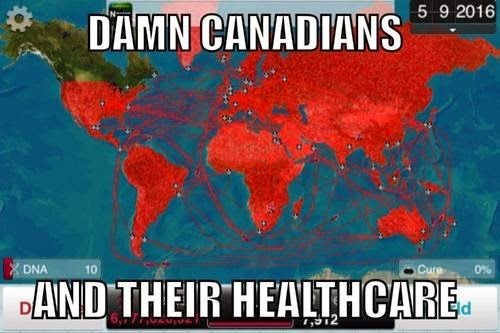 It was at this point, merely six hours after Ulrich left his detachment and kept getting into fights with dittoheads on the road, that some of the dittoheads started fleeing back for the border. They saw the ferocity of an angry Mountie, engaging over twenty of their number at a time, breaking bones, kicking butt, and taking names. As stupid as they could be, these dittoheads recognized trouble when they saw it. The trickle of retreating dittoheads became a flood as some told their fellow dittoheads of the terror behind them. "It was like looking at the face of death," Randall Kelly, 48, a devoted dittohead from Kansas told reporters after reaching the other side of the border. "I ain't never seen nothing that scary. I figured if I stayed, I'd end up broken and bloody and in one of those godless Canadian hospitals where Saint Rush tells us they'll kill you on the hospital table even if you just came in with a hangnail. Uh uh, no sir, not for me. So I turned tail and I skedaddled."

Ulrich didn't stop at the border in his pursuit of the hordes of dittoheads. He crossed right through. A spokesperson for the State Department spoke to reporters in Washington. "We sent out orders to our people at the border to just let him through," Nicole Beckett explained. "First of all, the Inspector's saved the world on more than one occasion. Second, the people he was chasing started the whole thing, and frankly, the President believes they had it coming." 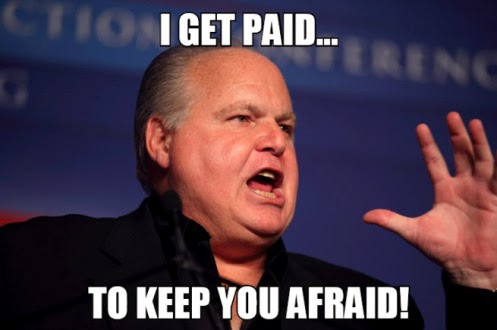 The terror of the dittoheads went viral. Limbaugh, who had been perched in a radio station in Great Falls, Montana, directing the movements of his legions of dittoheads north, got word that things had gone drastically wrong. He was broadcasting a panicked rallying cry for reinforcements, mixed in with his usual condemnations of the President, Hilary Clinton, Sesame Street, liberals, and anyone who doesn't follow his orders. Witnesses to what happened next told reporters they thought Limbaugh assumed he could rally his followers to take a stand and drive back the force of nature that was the cranky Mountie.

Instead the cranky Mountie plowed through the lines of dittoheads, sending them fleeing in horror. Learning the location of Limbaugh, Ulrich barged into the radio station, and found the pundit in the booth. For a moment, Limbaugh's listeners heard complete silence over the airwaves. Then it was followed by the meekest tone they had ever heard coming from their hero. "Um, you wouldn't hurt a Metallica fan, would you?" Limbaugh asked.

That was the last straw for the Inspector, who gave Limbaugh the beatdown that he had coming thirty years ago. The pundit was taken out of the radio station on a stretcher for medical care, babbling about seeing the moose. Doctors say they believe he'll be eating meals from a straw for the next six months. Having had found and demolished the leader of the dittoheads, Ulrich returned home. No reporter dared to cross his path. Border officials simply let him back through into the Great White North, and he returned home, cranky but satisfied that the incursion was finished. 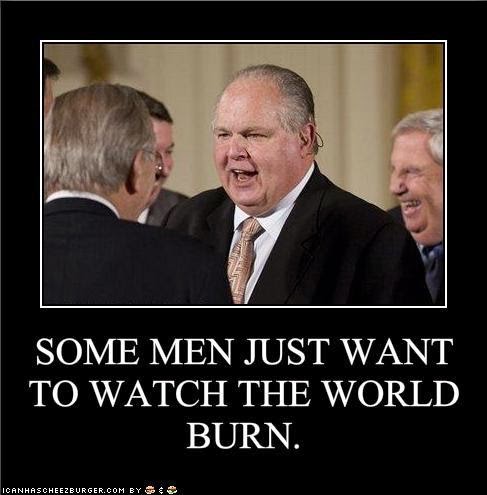 In the wake of the incident, numbers are still being tallied. On either side of the border, beaten and bloodied dittoheads have been in the hospital, numbering over twenty nine thousand. Most of them on the Canadian side of the border are facing serious criminal charges. Officials further estimate that eleven thousand more managed to flee without incident, though deeply traumatized and shaken by fear, often seen to be weeping uncontrollably. "I don't know what I was thinking," Mr Kelly admitted to reporters, shaking back and forth. "It don't matter how long I'll live.... that scene of carnage, that angry Mountie... it's going to haunt my nightmares the rest of my life."

The President had the last word as he spoke to reporters in the White House. "Look, anyone of reasonable intelligence knows you don't bother Lars Ulrich. You treat him with respect, because the guy's saved the world and he's a pretty dangerous guy when he wants to be. Beating up nearly thirty thousand people over four days is pretty much proof of that. The fact of the matter is that Rush Limbaugh is not a person of reasonable intelligence." The President paused, then smiled. "And since he'll be spending the next six months or so in traction, that means he's off the air. I'd say that's a win-win for us." 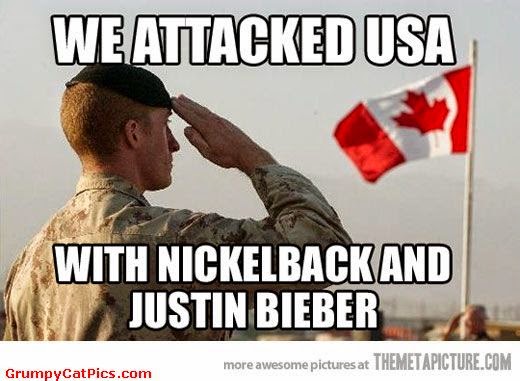