Death And Other Tragedies

Some links to see to first off before we get started. Yesterday was a Snippet Sunday, so Norma posted a short piece from one of her old books. In addition, at our joint blog, we had a Snippet set up.

In the past I have posted eulogies gone awry for mock funerals. You can find them here, here, and here. While you're at it, check out Rowan Atkinson giving a eulogy. It seemed about time to mess around with the funeral tradition once again. 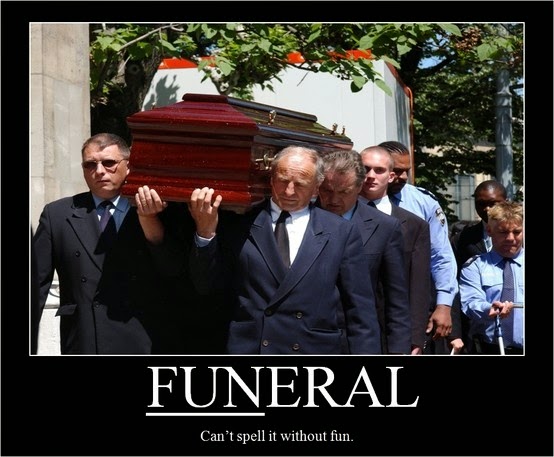 "Thank you, Reverend Mitchell, for that stirring introduction. Ladies and gentlemen, for those who don't know me, I was Richard's friend from our days in university. It might seem strange that someone who hasn't seen that much of him in twenty years would be asked to give a eulogy, but then again, most of his friends and family are suspects in his unfortunate passing, and as I understand it have been advised by their lawyers not to say a word to anyone about anything. And so it falls to me to bid him farewell.

Richard was the sort of guy who liked being the center of attention. He was the captain of the rugby team, and that got him a lot of attention from the ladies. He always had four or five of them in his life at any given time. Not that they knew anything about each other. I see four of them here today, as a matter of fact. Alicia, did you know Richard was fooling around with Rebecca, Morgan, and Elizabeth while you two were dating? Oh, by the look on your face, I can see you didn't. Maybe I shouldn't have said that out loud. Now, where was I?

Oh, yes. Richard had a healthy appetite for the company of women. He kept that up for years on end all through university. It amazed some of us that he'd be in shape for a game the next day after being up all night banging girls in rapid succession. Oh, I see by Reverend Mitchell's expression that I ought to be careful what I say. My apologies, Reverend... I forgot I was in a church for a moment. 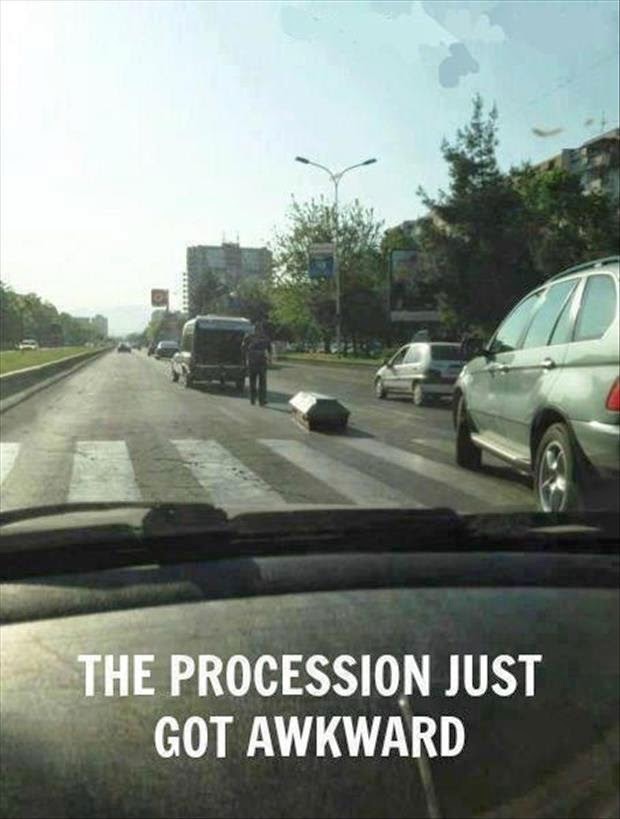 As I understand it, from our occasional chats, Richard never really got past that habit of seeing other women on the side. I know this would come as a great shock to his lovely wife Portia, or to his other lovely wife Alexandra, both of whom I see in attendance here today. Ladies, it must have been a shock to you to find out he was a bigamist after he passed. I don't know how you'll sort out the life insurance thing between you. I suppose it depends on if either of you get charged with first degree murder.

Well, ladies, I'd like to apologize to both of you. You see, I was aware that Richard had gotten himself into that state of bigamy. I suppose I could have tried to reason with him. I suppose I could have reminded him that he was playing with the lives and emotions of two women who loved him. But I just felt that, well, Richard was the sort of man who'd go off and do what he wanted anyway. He tended to let a part of his anatomy that wasn't his brain do all the thinking, if you know what I mean. Which explains how he always had at least a half dozen mistresses on the side. Some of whom I see here today. Hello, ladies. 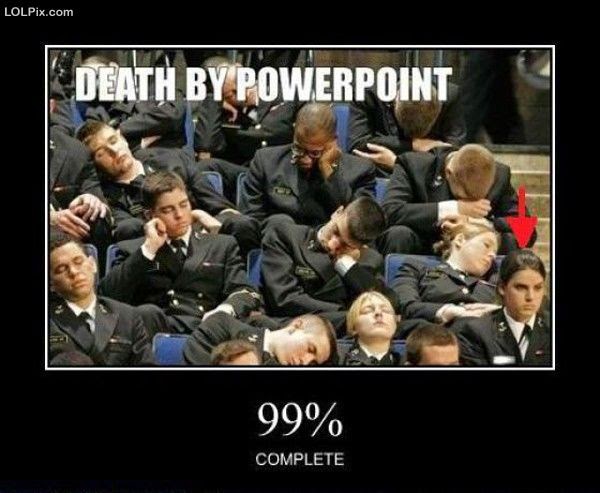 We can't really blame Richard for that, can we? After all, he was blessed with good looks that the women found so appealing. Until the last moment of his life when one of the many bullets that riddled his body damaged his face. Yes, Richard went through life with all the luck with the ladies. Unlike his brother Tom, who ended up with the sort of face that makes you think he was hit by an ugly stick. It didn't help that Tom was a sullen drunkard with a bitter streak a mile wide... oh, hello, Tom! Tell us, did your bitterness perhaps lead you to want your more successful and luckier with the ladies brother dead? Because if so, I'm sure the detectives from Scotland Yard would love to have a word with you.

Richard had his friends. And he had his enemies. You know, when he was a boy, he told on a boy who'd shoplifted a candy bar. Mick was his name, Mick Albertson. On the street they called Mick by the name Mugsy. Probably because he was a mugger, a leg breaker, the sort of hired muscle you'd enlist to help you settle a score. It seems Mugsy's whole life went downhill from that incident being ratted out for shoplifting. One criminal charge after another, until finally he was doing ten years for armed robbery. He got out two weeks ago, and according to the police, well, Mugsy blamed the whole state of his life on that rotten Richard Covington when he got out, and swore that Richard would get what was coming to him. In retrospect, that seems ominous, doesn't it? 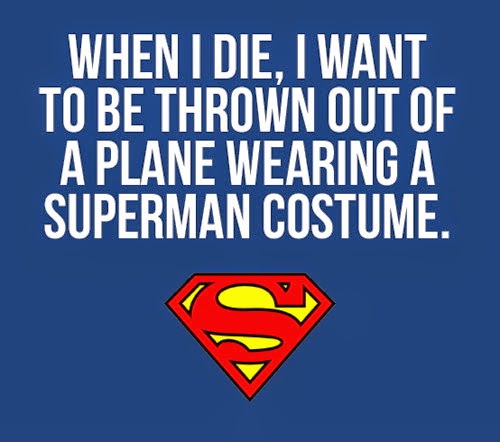 There were others who didn't much care for Richard. I remember him once remarking to me about his idiot brother-in-law George. He told me that George was the sort of person you'd move out of the country to never see again. An entirely unpleasant, rotten to the core, buffoonish dolt with an appalling lack of intellect. Obviously they didn't get along. Oh, don't look at me like that, George. Everyone knows you're the stupidest person in this sanctuary. Even the minister is nodding, you halfwitted moronic git. So was it you, George? Are you the one who got pushed over the line because you knew he was smarter?

Or was it someone else? Richard went to work as an investment banker. And he was good at what he did. At least that's what we all thought. It's only come out in the last few days that he managed to defraud and rob scores of investors of millions. They trusted him. They believed he was taking care of their money. And he was. He was helping himself to it. Squirreling it away God knows where. I know if I lost my life savings to an investment banker, I'd be ready to pick up a gun or a knife and finish him off. 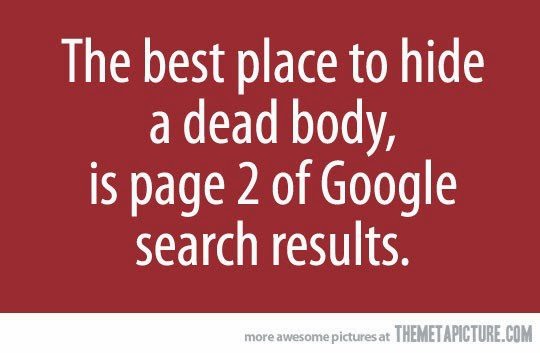 I suppose there's a benefit to not being in touch with Richard that much in the years since. At least I was wise enough not to invest my earnings with him. That means unlike the people who are only now realizing how much money they've lost, my retirement someday is comfortably taken care of. Those of you who were closer to him, well, you trusted him and he let you down. You couldn't have known he was pulling a Madoff and making off with over a hundred million pounds stirling of your money. And it wouldn't have been that hard for one of you to decide to get a little revenge, isn't it? You must have thought he more than had it coming. Maybe he did. 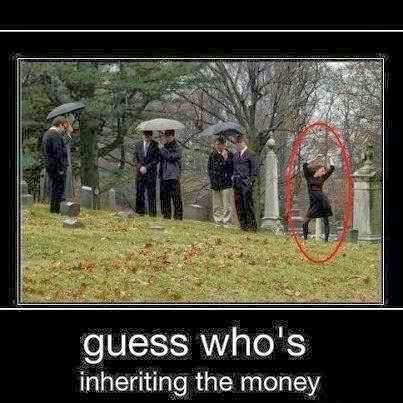 Well, I don't envy the police on this. They have more than enough suspects. Could it be the bitter and resentful relatives? The friends and clients he screwed out of their money? One of his many mistresses? Or the two women he promised to love, cherish, and honour... never letting either of them know that he was married to someone else? It's a riddle, wrapped inside a puzzle, and packed with an enigma.

At least the police and I know that I've got a rock solid alibi for the time Richard got riddled with forty seven bullets. I was in Australia, getting a full body massage from a really hot Swedish masseuse named Asta. So to those of you still on the suspect list, I can only say, nyah nyah nyah nyah!" 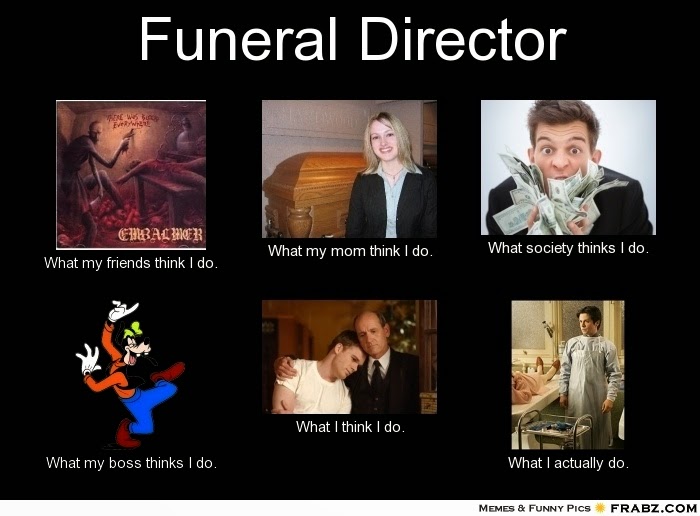