Can We Be Freed Without That Musical Number?

Some links before I get started. We had a Snippet Sunday post at the joint blog. Krisztina had suggestions for carrot cake at her blog. Cheryl has some shots at her page from an arts and crafts fair. This being A-Z Month among some bloggers, Shelly and Eve are both taking part. Gina took a look at the town of Toledo, Oregon at American Small Towns. Christine posted at her blog about going to an interactive history park. And have a look at what happens in the video link here about a moose that was freed after being stuck in snow.

It's Easter week, and Passover too, so I thought I would do two movie reviews in advance, both dealing with the theme of the Exodus. Today I'll be dealing with a more recent version of the story, and in my next post I'll be examining the classic version. 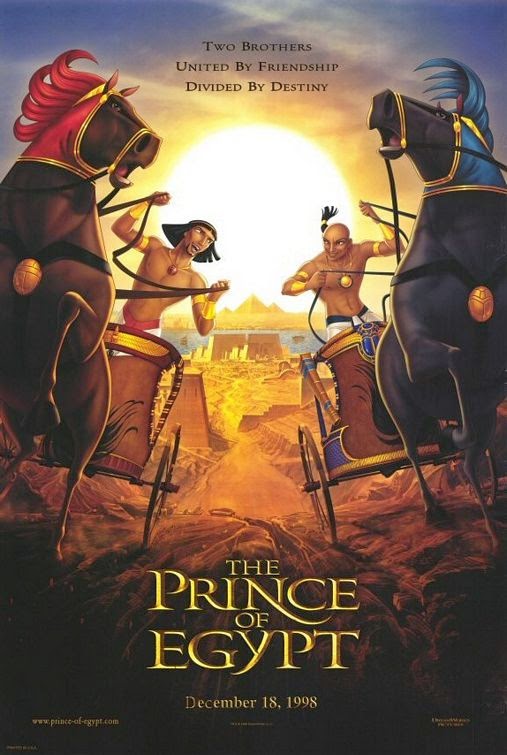 "I will not be dictated to, I will not be threatened. I am the morning and evening star, I am Pharoah!" ~ Rameses

"I seek to build an empire, and your only thought is to amuse yourselves by tearing it down! Have I taught you nothing?" ~ Seti

"Tell me this, Moses, why is it every time you start something, I'm the one who ends up in trouble?" ~ Rameses 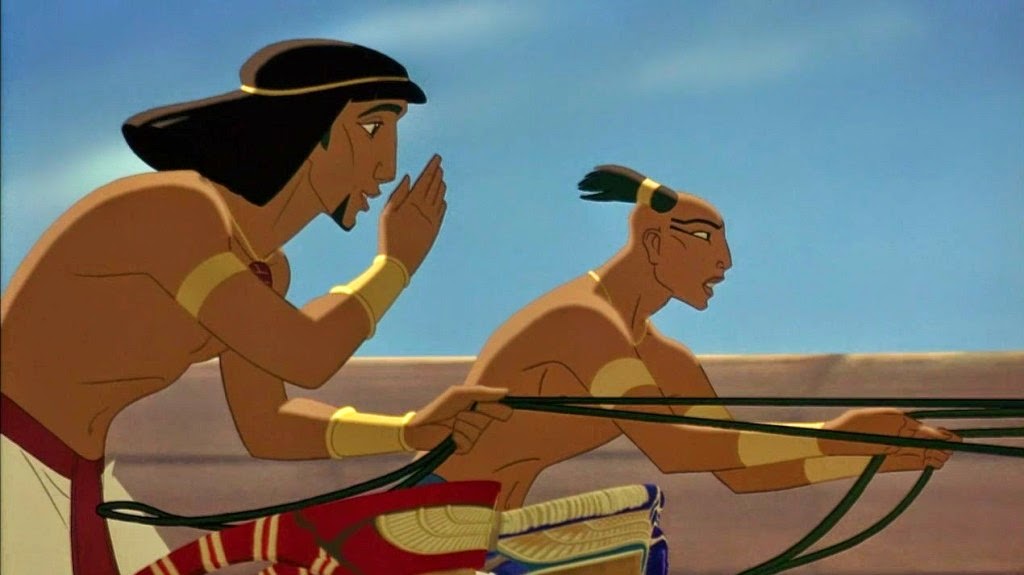 Back in 1998, Dreamworks Studios gave Disney a run for their money in the animation department with a different take on the familiar Exodus story in The Prince Of Egypt, telling the story of Moses rising up to lead his people from bondage. The film was done in the traditional style, enhanced by computer effects, and directed by a team: Brenda Chapman, Steve Hickner, and Simon Wells. True to most animated films, it was done as a musical, with songs by Stephen Schwartz, and a music score by the prolific Hans Zimmer. It featured an all star cast of A-list talent (with professional singers backstopping some of them). 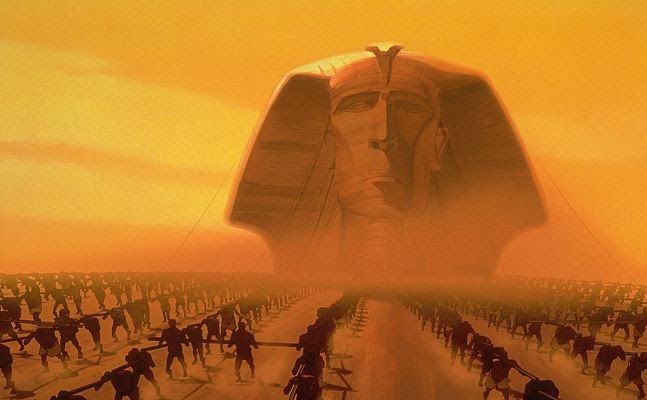 The film follows the life of Moses, born at a time when Hebrew children are being killed at the orders of the Pharoah Seti (Patrick Stewart). The infant's life is spared as his mother gives his fate to God, and the baby is found in the Nile by the Pharoah's wife, Queen Tuya (Helen Mirren) and taken into their household. Years later, the baby has grown up to become Prince Moses (Val Kilmer), brother to the heir Rameses (Ralph Fiennes). The two brothers have a friendly rivalry, get into trouble on frequent occasions, and are cared for by their parents. Moses is something more of an instigator; not having to inherit the throne means he can be more carefree and find mischief, particularly at the expense of two of the Pharoah's court advisors (Steve Martin and Martin Short).

All is not well, however. A chance encounter leads Moses to learn the truth that he is the son of slaves, and circumstance drives him away from Egypt when a man dies at his hands. He finds a new life in the wilds, marrying into a nomadic family and finding happiness with Tzipporah (Michelle Pfeiffer). As time goes on, Moses finds himself confronting the god of his people, who has a purpose for him. 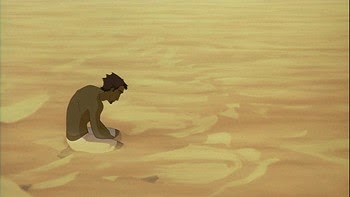 This is a very different take on the story than The Ten Commandments. As an animated film, it operates under different rules, and indeed, for a different audience. I don't think Cecil B. DeMille would have gone for a musical, and personally for the most part, the musical side of things I could have lived without. Most of the songs contained through the film could have been left aside (sorry, Mr. Schwartz), though a couple of them work very well, such as When You Believe, which accompanies the Exodus sequence. That said, however, the songs aren't gratingly annoying in the way that I found almost all of the songs in The Lion King (fans of Elton John may have me burned in effigy at their pleasure). Zimmer's score, on the other hand, is powerful and just right as it's needed, whether it accompanies a chariot race or follows the climactic sequence in the Red Sea. 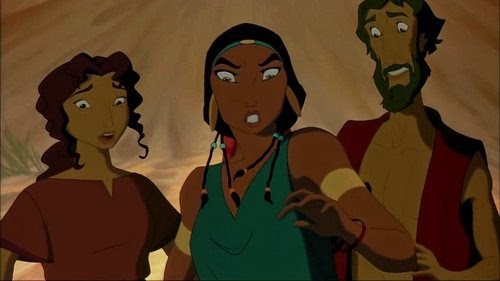 The animation style fits the subject well. The characters look Egyptian or Hebrew (as opposed to other previous versions of the story where very white actors take on the parts). The characters have a bit of an angular, impressionist style in their appearance- Aaron, for example, as voiced by Jeff Goldblum, has a very animation style look, whereas Seti's appearance reminds us very much of the actor voicing him, Patrick Stewart. More importantly, the animators really convey the personalities of the characters, both in expressions and in attention to detail and body language. The animation extends to matters of place and clothing, conveying the sense of ancient Egypt, the lowly homes of slaves, and the wilds of the desert well. The advantage of more modern techniques, enhanced by computer, gives the viewer sequences that pay off better than the limitations of DeMille's time, but those techniques rightfully are only meant to aid the animation process, not supplant it. The burning bush, the parting of the Red Sea, and the final plague each have a very dramatic quality that uses current techniques to their full capabilities, and give the film a breathtaking kind of quality. 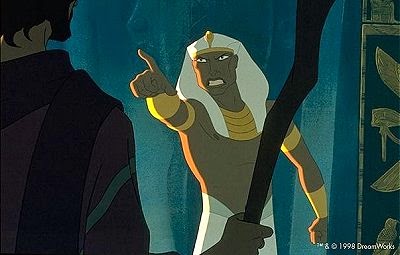 The screenplay is by Nicholas Meyer and Philip LaZebnik. Meyer, it turns out, had a hand in directing and writing two of the Star Trek films. Their screenplay works on multiple levels, a good thing in animation. While there's enough there to entertain children- though the theme is perhaps more mature than other animation- there's a lot in this story that adults will get that would just pass by children. The writers give the story just a hint of humour here and there to lighten up the mood- Moses falling into the well, for instance, or a mishap that results in major damage to a very large tribute to Seti. Largely, though, they deal with themes of freedom, family, ambition, faith, and fate as the story goes along. They weave in different takes on some of the character dynamics as well- Moses and Tzipporah start out in more of an antagonistic way, for instance, and Aaron is disbelieving and initially hostile to the presence of his brother when Moses returns from the desert. Perhaps the best of these different takes, and the real foundation of the film, is the relationship between Moses and Rameses. In earlier versions, the two are firm rivals, at odds with each other even before the truth is revealed. In this version the two brothers genuinely like each other and get along well. It makes it all the more painful when they find themselves on opposing sides- Rameses at one point asks in a mournful way why things between them can't be as it was. 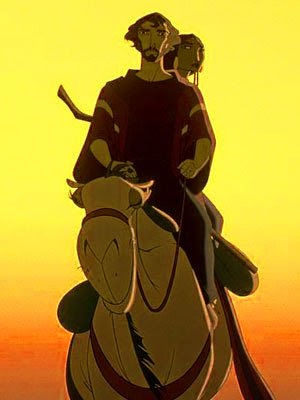 The voice work by the actors brings the characters to life. Ofra Haza plays the biological mother of Moses early in the film, voicing and singing the character as she gives up her son to the uncertainty of the river. Patrick Stewart and Helen Mirren as the parents who take him in and make him a prince are well cast. Stewart's voice brings authority to the role of Seti, a man trying to rule his kingdom and thinking of what's to come for his people after he is gone. He does terrible things, and dismisses those terrible things by saying, "they were only slaves", but at the same time, the man is considerate and thoughtful. Mirren voices his wife as the only mother Moses has known, fiercely loving of both of her sons. Danny Glover turns up briefly as Jethro, voicing the role of Moses' father in law somewhat more for laughs than you might expect. Steve Martin and Martin Short, who have worked together before, voice the two courtiers as conniving weasels and disapproving irritants. They're both comic relief, which is to be expected given that's the strong trait of both actors. Jeff Goldblum gives Aaron an interesting turn, not as the stoic figure we might expect, but one who's deeply distrustful of his brother and seemingly resigned to his place in life. He needs to move past that, and in time does. Their sister Miriam is voiced as an adult by Sandra Bullock, after a brief appearance voiced by another actress, Eden Riegel, as a child, and sung by Sally Dworsky. Her take on the character is that of a strong, opinionated person with a basic faith that her people will be led out of bondage. The dynamics Moses has with these two birth siblings is as different as those with his adoptive family, but still critical in what drives him forward. 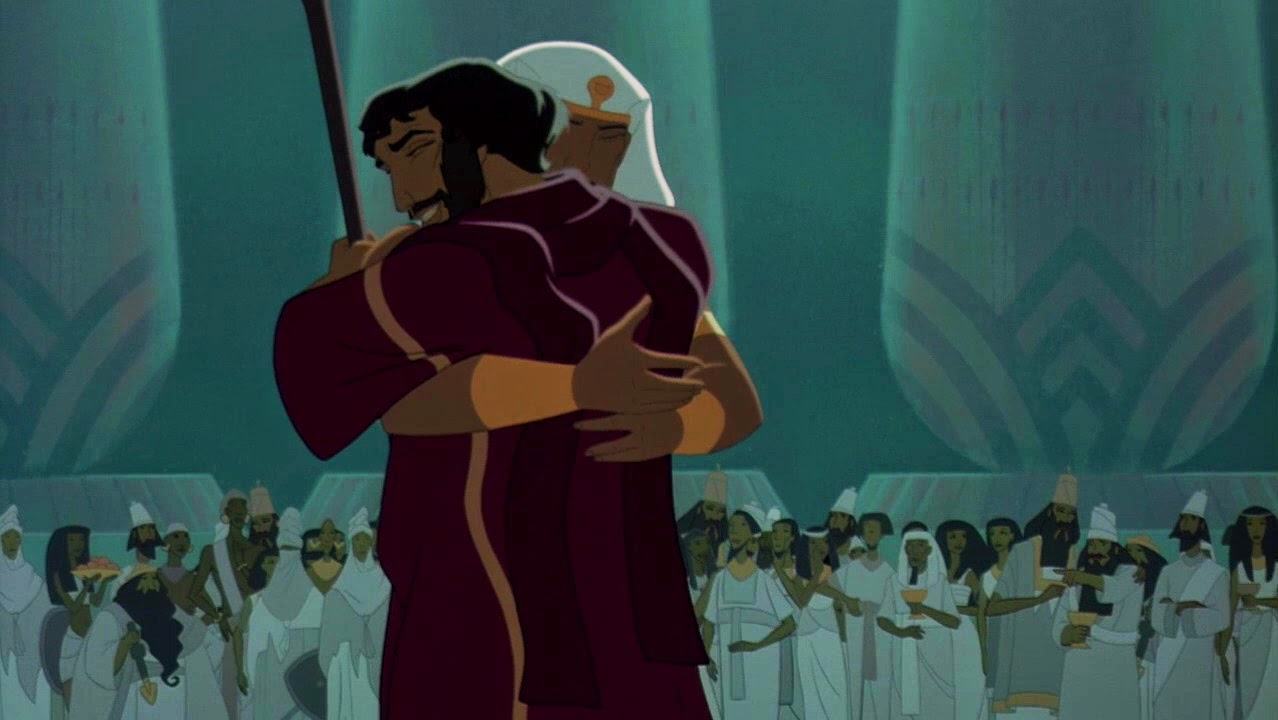 Michelle Pfeiffer voices Tzipporah, and sings the role as well (anyone who's ever seen her in The Fabulous Baker Boys knows she can sing). The character has a modern sensibility to her. She can take care of herself, is resourceful and aggressive when she needs to be. She doesn't back down, can be stubborn, and is sure of herself. Pfeiffer conveys all of these qualities in her vocal performance. Sure, she and Moses seem to fall in love thanks to a montage in a song (curses to the person who first came up with the idea of musicals, by the way), but the relationship feels grounded. Ralph Fiennes has played the villain on more than one occasion, and yet his Rameses is sympathetic. There is a proud arrogance in him, a dark streak at times, and at the same time, there's the side of him that deeply misses his brother. It gives him depth, and makes him a character we can relate to. Kilmer's take on Moses is also interesting. Freed from the unenviable fate of ruling Egypt as a young man, he's carefree and full of mischief, a refreshing take on the character. As the story moves along, Kilmer's voice takes the character from shock over the truth about himself, to personal doubt, to strength of will, never losing track of the humanity of the man.

The Prince Of Egypt is an interesting counterbalance to The Ten Commandments. It mostly takes itself seriously, given the seriousness of the subject matter. It grounds itself in a story of brothers torn apart, of the meaning of freedom, and uses animation to depict an epic, familiar story in a new way. Despite the presence of most of the songs (have I mentioned I don't like musicals?), the movie works very well indeed. 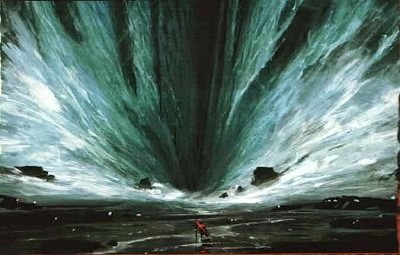