A Day In The Life Of Severus Snape

First things first. Go on over to Norma's blog and see what kind of week she's been having. And my photo blog Ottawa Daily Photo is now up and running. I started posting on Thursday, so I've got posts already in place, and lots more in drafts. Go through that link, or photo kitty placed conveniently to the right there (isn't the kitty cute?) any other time to see what I'm up to. And by all means, put that blog on follow. I'll be quite active with it, now that I'm getting the hang of it.

Today then, I'm doing another Day In The Life, before moving onto other things, and it's one that I've had in mind for a long, long while. Strangely, this one didn't come easy to me; I had to keep writing him in character, obviously, and he's not my character (oh well, he's such a compelling character regardless, not to mention the Best Double Agent Ever). I find myself wondering what J.K. would make of what I've done here. And it seemed appropriate to be setting it before Goblet Of Fire.

Our protagonist Professor Snape isn't exactly a funny fellow, and I was going to take things in one direction (he does think about the notion in the following), but, well, it's something Severus just wouldn't do. It would dishonour the most important relationship of his life.

One night stands with gossip rag sheet writing witches, however, we wouldn't put it past him. 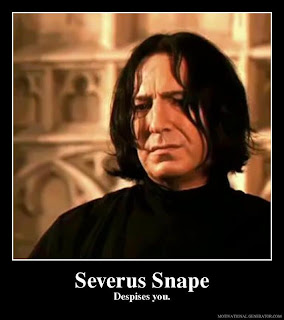 8:25 AM, August Fifth. Awake in my quarters in Hogwarts. Quiet this time of year. Soon those wretched students will be coming back for their lessons in Defense Against The Dark Arts, Potions, Charms, and all of the rest. Apparently this year Mad Eye Moody will be teaching Defense Against The Dark Arts. I wonder why Dumbledore keeps refusing to allow me to teach that one. 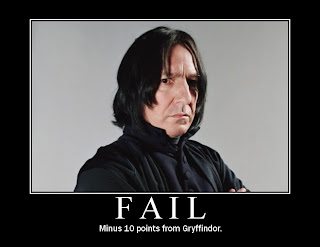 8:40 AM. Breakfast in the Great Hall. Much quieter without students. Much more suitable if you ask me. Professor Flitwick is going on and on about the Quidditch Cup or something. Not really paying attention, but then again, I do have quite a poker face, and most people can’t tell when I’m ignoring them. 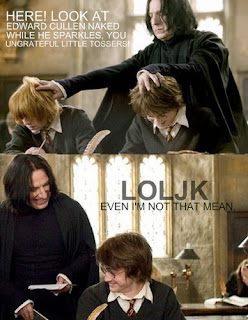 9:10 AM. Having a word with Professor Trelawney. As always, she’s as cryptic as one might expect. Sybill says something about a cranky Mountie taking on a life of his own and attacking entertainment reporters. I wonder if we can get this Mountie Muggle to go after Rita Skeeter. I’m so glad I never picked up with her where we left off after that one night stand. 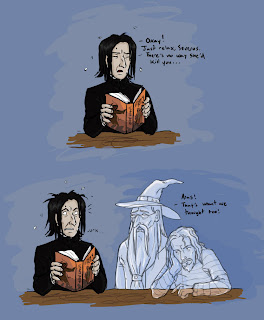 9:25 AM. The Daily Prophet arrives on time as usual. Skeeter is prattling on about the manhunt for Sirius Black, who remains at large after his escape from Azkaban. I have, at Dumbledore’s request, never once mentioned that evening last term when Black was briefly in my custody. Life as a double agent can be trying at the best of times. I wonder how far away he is. The more distance, the better. Innocent or not, Sirius Black was nearly as insufferably irritating as James Potter. 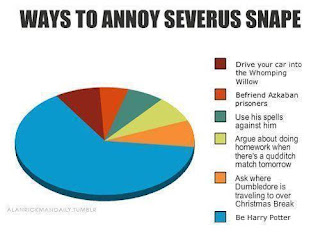 9:50 AM. Having my morning Earl Grey with honey and lemon. I’ll say this for Muggles: the morning tea ritual is very welcome indeed. 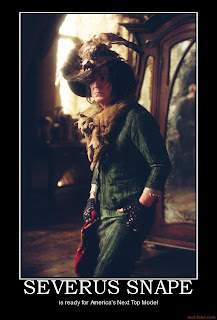 10:10 AM. Brooding. Brooding some more. It’s a thing with me. It's classic Severus Snape. And so I brood. 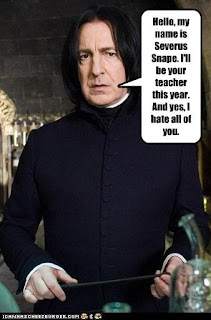 10:35 AM. Mr. Filch stops by to growl and complain about Moaning Myrtle and Peeves causing a ruckus in Ravenclaw Tower. Filch insists Peeves must be banished from the castle. It’s only the fourth time this week he’s insisted that. I inform him I’ll dispatch the Bloody Baron to knock some sense into the poltergeist. What is it with ghosts and this castle? 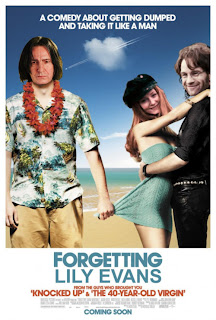 10:50 AM. Have heard back from the Bloody Baron. Peeves is apparently sulking after being yelled at. Yes, well, Peeves had it coming. Well done. Perhaps this time he might behave for more than five minutes.

11:40 AM. Passing through the portrait gallery. Stopping to look at the faculty portraits, which, of course, are always moving. There’s that completely self-absorbed twit Gilderoy Lockhart He’s not missed around these parts. Wondering why I always look so irritable in every picture that’s ever been taken of me. 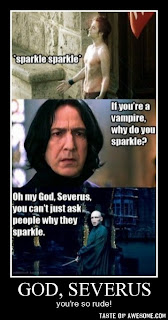 1:15 PM. Conference with Professor Dumbledore. We discuss the upcoming school year, and the ongoing search for Peter Pettigrew. Dumbledore remains convinced the Dark Lord will return, and Pettigrew will no doubt take part in his resurrection. We are interrupted by the sound of Mr. Filch yelling at Peeves. 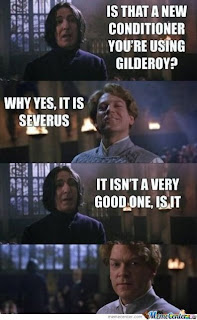 1:17 PM. We find the source of the problem. Peeves has managed to overturn every table in the Great Hall and change all of the banners to Manchester United colours. I find it peculiar that a poltergeist could manage the latter. And why would he care about Manchester United? Dumbledore yells at Peeves. This time the poltergeist actually seems to be listening. 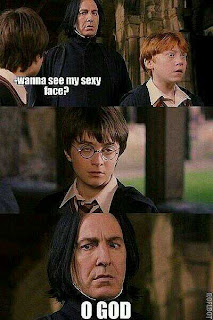 2:05 PM. Discussions with Professor McGonagall and Madam Pomfrey. It seems Hagrid got kicked by a thestral and needs his leg reset. Poppy tells us that’ll take a few hours for the bone to regrow. As can be expected, Hagrid is complaining. I’ll bring him a bottle of butter beer later. Maybe one for myself too. 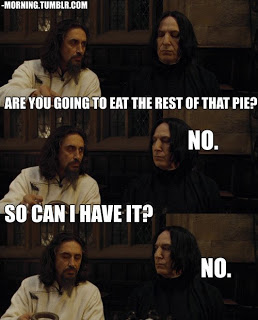 3:15 PM. Going over my schedule for the upcoming year. Have stopped at one name in particular. Cedric Diggory. I remember Professor Trelawney making a prediction last term that Diggory would die a sudden and traumatic death. Something else about sparkling vampires and being condemned to a life with a personality free cipher. I don’t know, I wasn’t paying that much attention at the time, and witches and wizards all know that vampires do not sparkle. 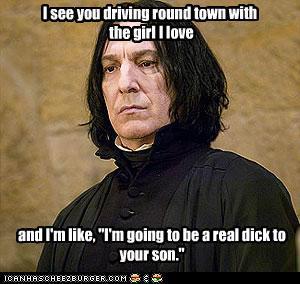 3:25 PM. Oh, look at that, Potter is in my Potions class. Again. On the one hand, he looks just like his father and acts just as petulant and arrogant as him. On the other hand… he has his mother’s eyes. And I’ve sworn to protect him. Lily would want that. Even if it does drive me up the wall. 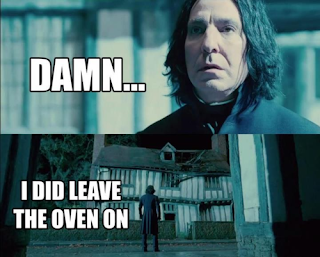 3:30 PM. Taking a break. Opening desk drawer. Taking out hidden portrait of Lily. Must keep this well hidden during school year. Can’t have Potter or his friends ferreting through my desk and finding it. Oh, Lily… 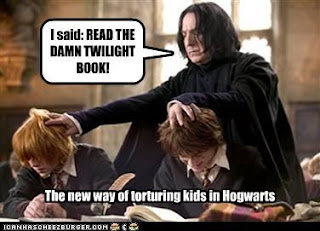 3:45 PM. Wondering what I would do if I could go back in time and stop myself from saying those terrible words that day. If I could only tell my younger Goth self, Look, it’ll be a bad day, but keep your mouth shut, or you will lose the only woman you will ever love forever. And you’ll regret it the rest of your days. Would it have worked? Or would I have ended up making things worse? Time is not something to be messed around with by witches and wizards, after all. Except for taking two classes at a time like Granger seems determined to do. 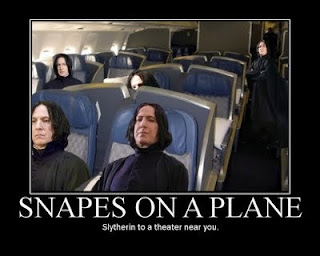 4:10 PM. Lily stares back at me with that sad expression she always has and wanders off into the portrait. Lily, come back. Lily!

Severus, it’s just the portrait. It’s not really her, after all. 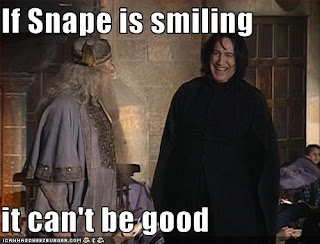 4:15 PM. Feeling thoroughly depressed. More so than usual. The few women in my life have never measured up to her. The relationships never lasted. She was the one, and I lost her to that insufferable prat James Potter. I have occasionally considered brewing polyjuice potion and having Sybill or Poppy drink it, turn one of them, or both, because that would be a lot of fun, into Lily for a few hours. At least I’d have a bit of a taste with sex with Lily… but it wouldn’t really be her. Particularly with Sybill making strange prophecies just at the most inappropriate time….

No. I cannot do that. 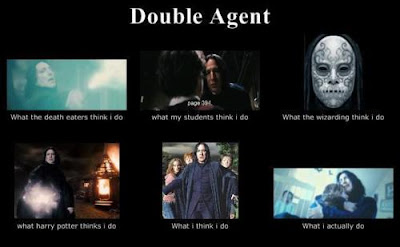 5:30 PM. Stopping in at the hospital wing. Hagrid is resting, his bones mending. Poppy tells me to keep it brief before heading off. I ask Hagrid how he’s feeling. He remarks on the ill temper of thestrals, invisible or not. I caution him to be more wary around such animals in the future. Then I hand him a bottle of butter beer. He’s quite grateful. I take out the other one that I brought along. After thinking of Lily for awhile, I could use it. Fortunately these are the adult versions of the drink. We hope Poppy stays away. She frowns upon adult beverages in her hospital wing. 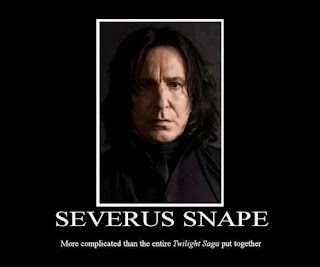 5:40 PM. Hagrid asks what has me feeling more bleak than usual. I tell him only that it’s about a woman. In the end, that’s the truth.... 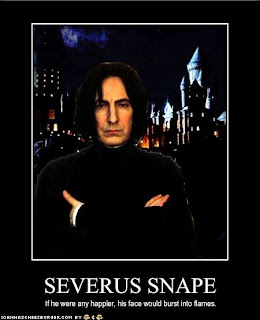 5:45 PM. Saying my goodbyes to Hagrid when we hear a racket from outside, a swirl of falling cauldrons and supplies. And Poppy’s annoyed yelling. I find her yelling at Peeves, who has overturned everything in the medical supply room, and is presently high above the floor, singing badly about a hotel in California.

I employ the Stupefy spell to shut the annoying poltergeist up. 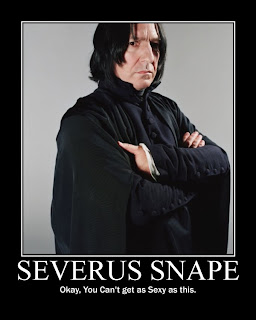 6:40 PM. Dinner in the Great Hall. Dining with Professor Sinistra and Professor Hooch. Rolanda goes on and on about the Quidditch Cup. I feel distracted. Thoughts of what life might have been like had things worked out with Lily… 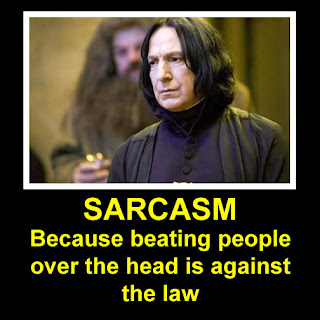 7:10 PM. Professor Burbage and I talk about Muggles. She confirms that Hotel California is a song by a group called the Eagles. In her opinion it’s a rather tedious song. I’ve always liked Charity’s company. Perhaps I should have let go of my regrets over Lily, moved on with someone like her.

What am I saying? Lily is my motivating factor as a character. Everything I ever do is for her. To make up for how I failed her.

Wait a minute. I’m a person, not a character, right? Right?

This is getting too existential for me. 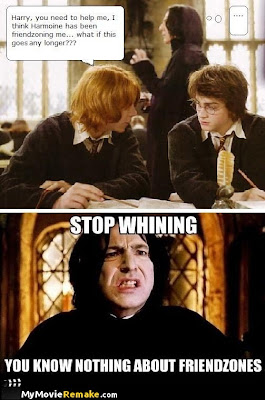 7:15 PM. Albus and I talk about the philosophical theory of the Fourth Wall. We decide that we are not mere fictional characters, but real people in and of ourselves. Yes, hopefully that should reassure me. 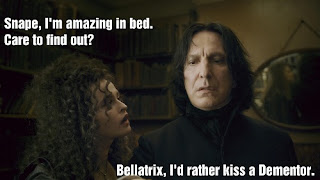 7:20 PM. Albus remarks on the coming school year. I ask if I really have to teach Potter. Yes, I know about my promises and all, and I will honour those, but really, Potter and Weasley just drive me up the wall, Albus.... 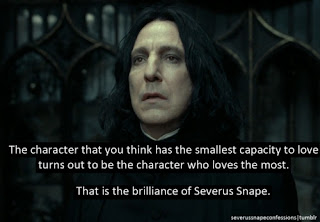 11:55 PM. Settling in for the night. It's been a long day, dealing with my regrets over the past. Lily will haunt my dreams again. And of course that irritating poltergeist kept us busy today. Perhaps Filch is right. Perhaps we should banish Peeves from the castle.

I wonder where he came up with the Manchester United banners. 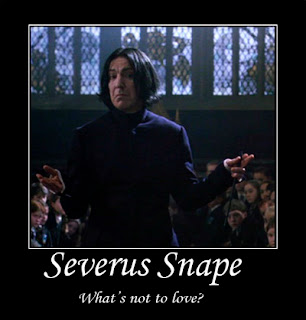 Posted by William Kendall at 10:43 AM