Wanderings Of A Canadian Loon

A couple of things to see to before I get started. First, head on over to Norma's blog for her review on the DVD release of Star Trek Into Darkness. And take a look at our joint blog, where we've got a musical interludes blog today, featuring two outstanding songs in concert by U2.

Now then, back again today with a photoblog, from places I've been to in the city as of late.

A few days ago I was over in the Hintonburg neighbourhood. The church you saw a couple of blogs back, the church of St. Francis of Assisi, dominates that neighbourhood. Nearby is the Rosemount branch of the city library. I was working at one of the computers, and the sculpture below, of a parson speaking with a groom and bride, stood directly opposite me, on the windowsill. 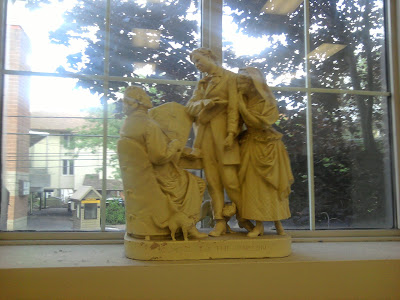 On my way home, I passed by St. Mary's, a Catholic church on the western edge of Little Italy. I've always liked the looks of the building, so I stopped by and snapped a shot or two of the front facade. No, I don't know what the deal is with the sky. I'm still learning through trial and error with this thing. 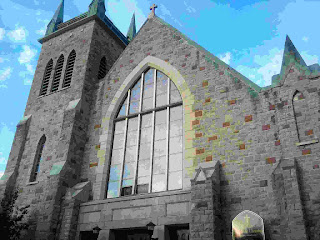 And down at Dow's Lake, which is part of the Rideau Canal, I stopped on the bike path, for there right before me was a great blue heron. I'll have to figure out the zoom feature on the smartphone quickly; this was the better of four shots. Still, the subject seems used to people. He walked down the concrete edge you see here, into the water, not minding the passersby, more interested in patiently beginning an evening of fishing. I'm always amazed, when I see them at the water's edge, at how still a heron can be. 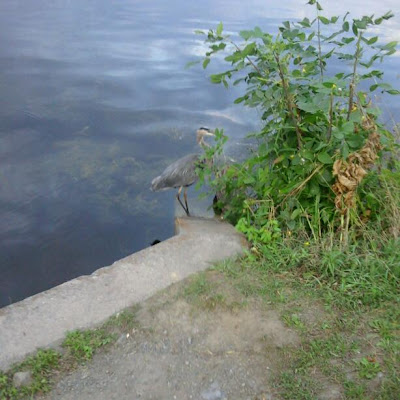