In The Company Of Evil

Well, I've been busy taking pics since the last blog. I'm getting my feet wet, figuring out the smartphone and thinking of photographic subjects. My next blog will feature a few more shots, and I'm thinking that I'll definitely go ahead and join in on daily photoblogs, in a seperate blog from this one, spotlighting my home town of Ottawa and beyond. Keep an eye out here for further developments as I go along. If you'll have a look over at Norma's blog, you'll see her response to my now getting my mitts on the smartphone (yes, I was dragged kicking and screaming into it, but that's beside the point).

Today, however, a bit of news occupies my attention... 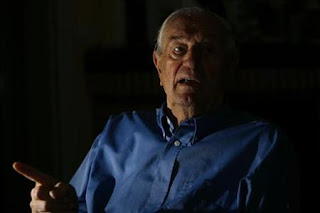 Last week, news came out that the last surviving witness of Hitler's final hours had died. Rochus Misch, an SS sergeant, had been a loyal bodyguard for much of the Second World War to the most evil man of the 20th century. Misch was unapologetic to the end, suggesting that Hitler was no brute or monster. He sidestepped the issues of guilt or responsibility, claiming he knew nothing of the Holocaust, thinking of those days as just doing a job, not asking questions. He insisted Hitler had been a wonderful man, describing the events leading up to the suicide of the dictator and his mistress turned wife. Perhaps it is because of his lack of remorse about it all that the end of his days is being treated from various quarters with derision. Where the country itself has accepted the past and taken responsibility, this man never did. This is a man who's seemingly spent most of his life not atoning for the past, never accepting what most reasonable people understand: that Hitler, and the Nazi ideal by extension, was pure evil, walking the earth.

From the point of view of the writer and the reader, the news occasionally provides inspiration. And stories from the war, even seven decades on, can provide us with fodder for writing. Jack Higgins, the great British spy writer, is an influence on me as a writer and as a reader. True, I'd say his work has been declining in recent years- he really should have stopped several books ago, but it's not the huge plunge off the cliff in quality that Tom Clancy's work has taken (side note: Tom Clancy hasn't written anything of value since The Bear And The Dragon). Higgins is known for writing pot boiler thrillers, both set in the Second World War and the contemporary world. He's best known for The Eagle Has Landed, a thriller about German plans to send an operative against Churchill, through the use of an Irish operative. The book was later adapted into a movie starring Michael Caine and Donald Sutherland, one that I liked. 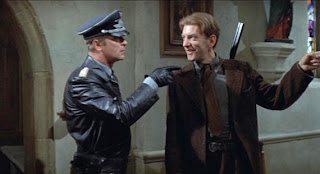 Most of his current work centers on Sean Dillon, a former IRA enforcer turned British operative, a hard man who can be both ruthless and yet utterly charming. Dillon started out as the villain, in a book which set him as the man responsible for the mortar attack against Ten Downing Street during Desert Storm, and yet Higgins found the character so compelling that he turned Dillon into the protagonist for his next book, Thunder Point, which draws on secrets linked to those last days of the War. It begins with the Nazi Martin Bormann escaping Germany at the end of things (making use of the rumors that persisted for years that Bormann survived), taking a submarine for sanctuary in South America. He carries pivotal documentation, including the names of those friendly to Nazi interests in Britain and America, and a document that could prove critically damaging to the Royal Family (another nod to the history of the Duke Of Windsor, who seemed entirely too comfortable around Nazis). The sub goes down in the Caribbean while Bormann is away, and decades later, the fact of its existence is uncovered, and a British intelligence officer, faced with an unknown enemy trying to reach the sub, enlists Dillon under the notion of set a thief to catch a thief, and starts the former terrorist out on the path to becoming a better man. The book remains a personal favourite, and it wouldn't be the last time Higgins made use of the war to tell a story in the present, later using a German baron starting out in the war as a young man, gradually rebuilding his life through the years after, ultimately becoming the villain in a later book, tangling with Dillon and his associates. 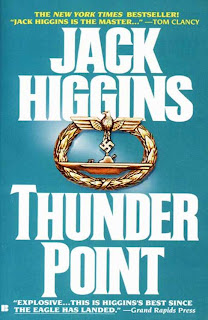 From the writer's point of view, I have ideas that come out of the war as well. I've mused on writing a thriller set squarely in the war. And I've also thought of using the war as part of the backstory for a book set in the present, for a villain whose family escaped to South America after the war, still holding onto Nazi ideals, still part of that legacy.

As writers, we find inspiration in some strange places. With the death of Misch, we have the end of an era, the last witness of those days in that bunker. It speaks volumes that he never made amends for it, that he still thought of that most reviled excuse for a human being as a wonderful boss.