Bloodied Paparazzi On The Giant Screen

Before we get into things today, some links to see to. Norma's been busy over in her blog reviewing new and returning shows. Check out her reviews for the return of The Big Bang Theory and for the series premiere of Agents Of SHIELD. And check our joint blog for our second Last Kiss image blog. As well, over at my photoblog, I've started up a series of posts featuring last weekend's Nuit Blanche festivities here. Just click on the photokitty to the right.

Full disclosure for the following... I'm a great fan of the IMAX genre, though I somehow doubt the two fake films I list in here will ever get made. Check out Everest, The Alps, or Kilimanjaro (it's the rock climber in me recommending those, and they're not for those of you who have issues with heights). I knew one of the founders of the company before his death several years ago; he and his wife were friends of my parents, and aunt and uncle. He looked like a hippie, but he was a technical genius. An amazing man.

Metallica, on the other hand, well, let's just say I'm not a fan. So when I heard they were releasing a concert film, how could I resist? 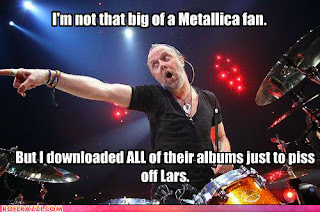 Los Angeles/ Calgary (CP) Heavy metal rock gods Metallica were in attendance last night in Los Angeles at the premiere of their new hybrid concert film Metallica: Through The Never. James Hetfield, Lars Ulrich, Kirk Hammett, and Robert Trujillo, comprising the current incarnation of the band, had their biggest smiles pasted on at the premiere, with cheering crowds roaring their approval as the band walked the red carpet into the IMAX theatre for the showing.

Executives from the IMAX Corporation, known for documentaries featuring stunning cinematography from far off places mixed with musical scores based on 60s and 70s rock music, were also in attendance, reassuring the public that the movie will not be showing in the science museums and typical facilities for the documentaries, but in mainstream theatres that have added on giant screens. “No worries, you’ll still be able to see breathtaking documentaries like the upcoming Search For Jimmy Hoffa and Life In A Siberian Gulag,” IMAX director of communications Alison Graves promised reporters on the scene. “We learned our lesson from that Rolling Stones movie debacle.”

The members of the band stopped to take some questions from gathered reporters, many of whom asked about the unique concert-narrative hybrid nature of the film, or the experience of seeing themselves on the giant screen. “Oh, it’s weird,” Hetfield admitted. “When you’re seeing your face and it’s three stories tall, you can really make out the scar damage from that bottle that once hit you on the forehead.” 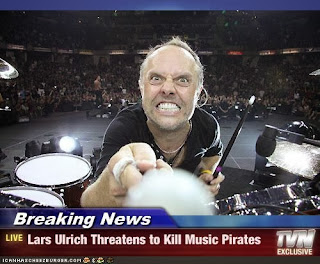 A question seemed to come out of the proverbial left field, asked by a correspondent from across the Atlantic. “Lars! Lars! Gunther Gustav, TMZ Europe,” he identified himself to the drummer.

“I’m sorry, you’ll have to speak up,” Ulrich told him. “I’m really kind of deaf after thirty years in a metal band.”

Gustav called out his question as loudly as he could. “What do you think about the new British Secretary of State Beaker’s nearly starting a war with Luxembourg?”

Ulrich looked confused. “What are you talking about?”

“Well, you are the ranking Mountie expert on Muppets, what with your taking down that Muppet supervillain Mr. Johnson, and since Beaker’s a Muppet too...” 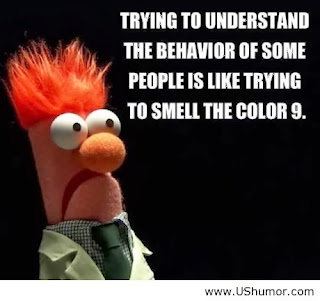 Ulrich looked around at his bandmates. “What has this guy been smoking?”

“I don’t know, but I’d like to try some of it,” Trujillo responded.

“Look,” Ulrich said, rolling his eyes in dismay. “You’ve got me mistaken with someone else. I’m not a Mountie... I’m not a cop. I mean, with the amount of drugs in my system down through the years, I’d never pass the screening tests to get into a police academy in the first place. So I’m not who you think I am. I’m the drummer for Metallica. You know, the reason we’re all here tonight?”

Gustav seemed puzzled. “Are you sure?” 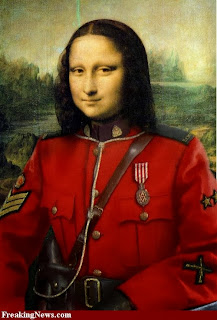 Word among the press has it that the Other Lars Ulrich was reached for comment. Reporters found RCMP Inspector Lars Ulrich at his detachment in Alberta that very evening. When he was found, he was fighting the town drunk, who used to be the mayor. Once he had knocked out the drunkard, he saw the oncoming crowd of reporters, and rolled his eyes.

“Look, I don’t care about whatever you’ve come to say, so get lost before I turn this into The Most Dangerous Game. And if you don’t get that reference, look it up. Read the book.”

“Inspector,” a reporter with the Globe and Mail began. “We’d like your comment, given your expertise in dealing with Muppets, to the situation between Britain and Luxembourg, in regards to Secretary Beaker’s slipup that drove up tensions between the two countries.”

Inspector Ulrich sighed and rolled his eyes. “Don’t you think I have other things to do? At least you didn’t ask me about heavy metal.”

“Of course not, sir,” the reporter replied. “I know you’re not that Lars Ulrich.”

Another reporter spoke up. “Wait a minute, I came all this way to ask you about heavy metal. Rick Richards, Lars, I’m with Hollywood Nightly.” Richards seemed oblivious to the venomous look in the Inspector’s eyes. “Tell us, why aren’t you at the big premiere tonight with the rest of the band? The Metallica IMAX film? Is there a serious rift in Metallica? And if so, tell us why. Inquiring minds want to know, Lars.”

The real reporters on the scene backed off, giving the Inspector a wide berth. Richards, as expected, seemed clueless.  Inspector Ulrich stepped closer. “I’ve got just two things to say to you.”

Inspector Ulrich sneered, closing his hands into fists. The real reporters took another step back. “The first thing is this. I am not that Lars Ulrich, you brain damaged jackass.”

Two seconds later, Richards was running for his life, screaming like a little girl, with the Inspector hot at his heels, chasing him in the direction of Dead Man’s Canyon. The town drunkard seemed to wake up, seeing all of the reporters nearby. “Oh, my head... I’m gonna be hung over in the morning. Say, any of you happen to have handcuff keys? Or vote in this township? I’m planning on running for mayor again next year, and I could use your...” He then proceeded to throw up. “Um, maybe you should forget you saw that.”


The reporters began busily writing on notepads and texting details to their offices. In the opinion of this reporter, the former mayor has a drinking problem. And this reporter is also wondering what might happen if the two Lars Ulrichs ever meet.... 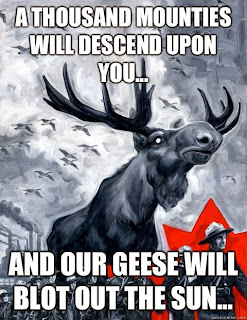