A Character In Search Of A Story

Two items of outstanding business to see to first things off. At her blog, Norma did a review of the first episode of the new series Blacklist. Head on over and check it out. Over at our joint blog, check out the first of two blogs featuring the Last Kiss comic strip, in a blog we're calling This Didn't Happen In John Ford Westerns. Get on over there and comment.

This is something I wrote awhile back. I still don't know where it'll end up going. It might be something suited for the joint writing that Norma and I do. The character names might change. Anyway, it's a moment between two people fraught with tension. Have a look at it.... 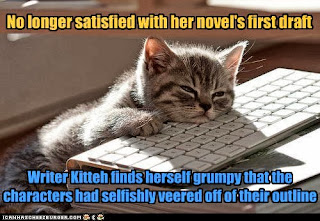 “Jack? You have a visitor.”
He glanced up from the file he was reading, the rap sheet for another fugitive, at the clerk standing nearby. She seemed nervous, unusual for her. Looking beyond her, he saw the reason why. He hadn’t seen her in over a year. There was a gloom in her features, a deep sadness. There was so much of Evelyn in her, but that was to be expected. The woman was, after all, her mother. He sighed, an anxious feeling starting to well up inside, the old pain that never really left.
“Is the conference room open?” he asked.
“It is,” the clerk confirmed.
“I’ll be along in a moment.”
The clerk moved off, joining his visitor, directing her to the conference room. Jack tried not to watch them go, handed the file over to another marshal, and steeled himself for whatever awaited him. He had never expected to see Elizabeth Collins again.

He walked into the room, closing the door behind him. She turned, facing him. The sadness was even more apparent up close, especially in her eyes. No parent should bury a child. He didn’t know what to say, still remembered the last time he had seen her, the anger from her and her husband, directed at him... unfairly, he had always thought. And he felt his own resentment surfacing, the memories of being denied a chance to say goodbye.
“Mrs. Collins,” he started. “I... wasn’t expecting you.”
“I didn’t... know if I... what I’d say,” she told him, her voice faltering.
There was a long pause between them, tension filling the air. “How are you?” he asked, chiding himself for the politeness, as forced as it was. Through no fault of my own... they kept Evelyn away from me. Why not just scream at her? Say what I’ve wanted to say? Why not be angry for losing the chance to be there?
“I... Mr. Scofield... Jack.” She shook her head. “I needed to say some things.”
He crossed his arms, stepped back against the wall. Oh, hell... “Go ahead.”
Elizabeth took a seat at the table, clasping her hands together, staring at them, as if summoning up the words. “Charles died three months ago, Jack. He never... Evelyn’s death just... it took away his will to live.” He was silent, torn between being sympathetic and the resentment he felt. “I’ve had to do a lot of thinking in the past year, and since Charles...” She shook her head. “We treated you horribly.” Elizabeth stared up at him. “Horribly, Jack,” she repeated for emphasis. She paused again. “You weren’t the cause of what happened. It was an accident... caused by someone else.” Elizabeth sighed. “But we blamed you anyway. We couldn’t accept you... couldn’t accept how Evelyn felt for you. And what we did to you... is unforgiveable.”
Jack stared at her for a long time. Yes it is. He remembered the restraining order, forbidding him from being at the hospital, followed by another, barring him from the funeral. He remembered the sneering attorney, the contemptuous expression in his tone. The police captain, a friend, had been apologetic, had shared his own anger about the turn of events. Jack remembered his anger, making the accusation that a judge had been bought off. It had bought him a contempt of court charge and a stay in a jail cell for a night. He had been coming apart at the seams, losing the love of his life... and to be torn away from her, to not even have the chance to say goodbye... “Why are you here?” he asked, his voice throbbing.
“I’m sorry,” she said. “I’m so sorry. We kept her from you, when she was in that coma. We barred you from seeing her again. We never... we never respected that you loved her too, that she loved you. We were wrong. I was wrong.”
He stared at her, saw tears flowing. “Evelyn loved both of you,” he told her after a long moment. “She tried so hard... to get you to see me for the person I am. And it hurt her deep inside, that you rejected what we meant to each other.” He shook his head. “I am trying really hard... not to yell, Mrs. Collins. Out of respect for her. She did love you both. That’s why I’m trying...” He sighed, held back, felt the wave of resentment, the pain. “But if you came here looking for forgiveness... or atonement...” Jack shook his head. “I can’t give you that.”
Elizabeth nodded. “I... didn’t expect it. I don’t expect it. I just... I had to say it.” She rose from the table, walked towards the door. “I am sorry, Jack. And I won’t bother you again.” She stepped out of the room, and he heard her walk away. The grief came flooding in from the corners where he kept it contained, overwhelming the resentment. A year on, and it was as if the wound was as fresh now as it had been that terrible night, when a careless driver had ended up shattering all that had mattered to him.
Posted by William Kendall at 7:06 PM

Email ThisBlogThis!Share to TwitterShare to FacebookShare to Pinterest
Labels: writing