A Spoonful Of Vodka Helps The Spam Go Down 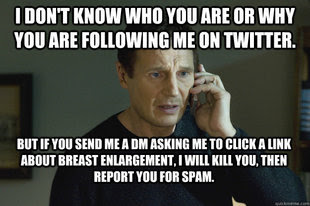 Every once in awhile they show themselves. Yes, the awful spammers. Either they're lurking in your junk file in your email, where you might expect to see pharmacy spam, real estate scams, pills for enlargements, and messages from the elusive Adriana who insists she show you nude pictures of herself. And then they turn up in your spam folders for your blog, where most of them go to die, never to be posted in an actual blog, caught for the spam that they are. Some of them are unintelligible. Others insult my regular readers (how many times have I seen the "is it just me, or do some of the comments seem to come from brain dead people" comment?). And others seek to let me take them on as apprentices or guest blogs, an act that I would only do if I weren't in my right mind, since it would result in a mass exodus of my readers.

So it is that a few days ago the following message, with a link spamming Prada handbags, ended up in my notifications for my blog. For obvious reasons, I did not add it into published comments.

Dear Mr Banks, I first came across your works about 15 years ago and since then I have eagerly awaited each new publication. Whatever the genre your works have been impeccably written and superbly imagined; never failing to excite and stimulate; never failing to amuse (and at times confuse); never failing to lift the imagination to a higher plane. I can only wish you well in these difficult times and my heartfelt thanks and appreciation for all your works to date. 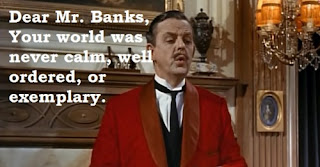 Me again. Well, apparently our spamming friend seems to think my name is Mr. Banks. So sorry, but no, I can't say I'm an English banker who likes things in his life to be just so and hires nannies who are practically perfect in every way. In fact, I can't even pull off an English accent. Any time I make the attempt, I inevitably slide into an Australian or Irish accent. So no, I'm not Mr. Banks. Besides, I'm pretty sure I have no need of nannies, since I don't have children (at least that I know of). And I prefer a beard to just the plain mustache. Besides, I avoid at all costs the wearing of a noose... I mean, a tie. Yes, I do think my work amuses and confuses people (admit it, dear readers, you're wondering where my lunacy comes from, aren't you?), but that's hardly the point! And I'm pretty sure that what I was writing fifteen years ago has never seen the light of day, so what on Earth has this spammer been reading, and who's this Banks fellow he, she, or it seems to have me mistaken with? 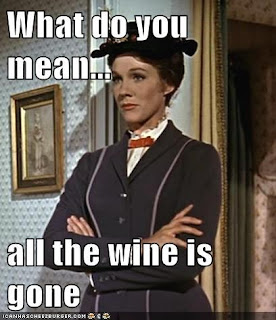 I'm sorry, Not So Dear Spammer, but I don't know any nannies who look suspiciously like Julie Andrews and like to fly with umbrellas, defy the laws of gravity, and hang out with Dick Van Dyke, a couple of kids, and every chimney sweep in London on rooftops and in cartoon chalk drawings that feature dancing penguins and marijuana brownies during high tea. Nor do I know any nannies who break into song for no reason at all while telling children that there's fun to be had even in chores. I have never met people who have tea parties at the ceilings of their home. I would not knowingly hire someone clearly making use of the dark arts of witchcraft and who seems to know everything I think before I do. Let's face it, that's a bit creepy. I have never had the Bride of Frankenstein in my employ (look it up, we'll wait for you).  And I'm pretty sure that none of my neighbours are retired admirals who like firing their cannons (and violating the noise bylaws) from their rooftops twice a day. In short, I'm not Mr. Banks. 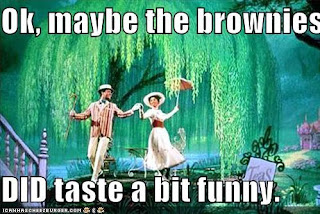 To the spammers: do you honestly think I'll publish your comments? Do you really believe I'm that foolish? I know, they'll never give up trying. And every once in awhile, they'll write something that I just have to comment on. Well, I leave you to it with these pics of the dark arts using nanny with the umbrella and a fondness for soot covered chimney sweeps turned jacks of all trades.

Just watch yourself around Mary Poppins, people. Never let your guard down. She knows what you're thinking. Yes. Every single thought that would shock the Sisters Of Little Or No Mercy. 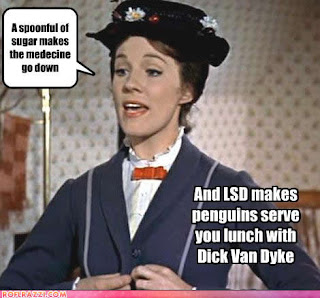 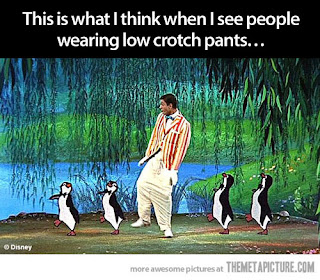 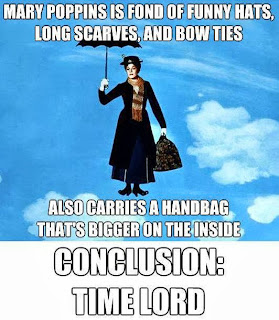 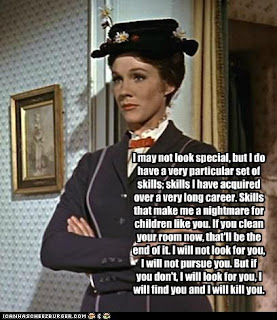 Posted by William Kendall at 3:55 PM