The Forging Of Two Nations

Some business to see to before I get things started today. We've extended our deadline at the Authors For Oklahoma initiative. Check out our latest update here. All proceeds for the book raffle go to the Red Cross, and help is still needed in Moore, Oklahoma, after the tornado this summer. Head on over to the update for more details, because it's a good cause.

My cover designer Collin Beishir has started up a blog, which you can find here at Wordpress. Check him out and start following him!

Norma's been off for a few days, but yesterday she wrote a new blog about her two birds named Sam at her Wordpress blog. Head on over there, check it out, and comment!

Finally, for those of you who enjoy my Day In The Life blogs, Norma and I worked on a variation over in the joint blog, and with the antics of a certain sleazy mayoral candidate in the news as of late, it's an appropriate and hilarious topic. Go on over and check out A Day In The Life Of A Sex Scandalized Politician. And leave us a comment!

As for today, I've got myself a book review to see to. So without further ado, shall we begin? The American Civil War tore apart a country. Secession in the South sought to establish a new nation where life could be lived in the fashion people were used to- with the foundation of slavery underpinning everything. Union Northerners refused to allow the country to fall apart, and for more than four years, Americans went to war against each other, killing each other in large numbers over the issues of race, freedom, the nation, and what kind of future they would all have. By war’s end, the country was reunited, slavery was abolished, and state’s rights, one of the underlying issues that had contributed to the war, gave way to a more unified sense of Americans about themselves. Yet two countries did rise out of the aftermath of that war.

Blood And Daring: How Canada Fought The American Civil War And Forged A Nation is a new book by historian John Boyko, weaving the tale of the Civil War and that of the birth of Canada. The war influenced Canada- and Canada influenced the war- in ways that most people overlook, and this book sheds light on a side of the war that needs to be told. I have read earlier books that go through some of this material; Claire Hoy wrote an insightful book several years ago called Canadians In The Civil War. This book delves into the same territory but offers new insights.

The author tells the story of the war and the parallels of what was going on across the border before, during, and after those years. The British North American possessions- Canada East and West, New Brunswick, Nova Scotia, Prince Edward Island, and Newfoundland- had been given chances to form a more cohesive union going back a decade or more before the war; officials in Britain were distracted by events in Europe and wondered if it was worthwhile to hold onto their Canadian possessions. American leaders looked north as well as west, believing in the doctrine of Manifest Destiny, that all of North America should be theirs. Abolitionists brought slaves north into Canada, to safety and freedom, away from the slave hunters, to the far end of the Underground Railroad. Southern aristocratic families vacationed in Canada in the summers, escaping the heat from their home states, forming friendships in towns along the way. And colonial leaders were divided among themselves. 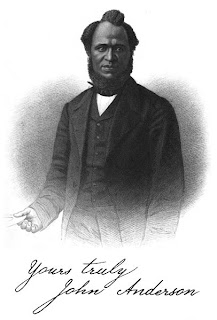 Boyko uses six people from the era as cornerstones to tell his story. John Anderson, a fugitive slave who settled in Canada after his flight to freedom found himself at the core of a court case, pursued by American officials for killing a white man during his escape. The case made headlines around the world; had Canadian courts ruled for deportation, it would bring an end to the safety of the Underground Railroad, potentially allowing any white slave holder to demand the return of a free man from Canadian soil. Through Anderson and people like him, who saw Canada as a place free of bounty hunters, this part of the story, so integral to the war that followed, is told. Boyko stresses the anger felt by many in the South towards Canada for harbouring what they viewed as personal property, and the influence that had in increasing the tensions between North and South.

William Seward, the fiery Secretary of State under Lincoln, is a presence through the book. His intention early on to try to provoke a war with Britain, in the expectation that the South would rally around the flag, is explored. Like other politicians in the North, Seward was a fervent believer in Manifest Destiny, seeking ways either through bluffing, intimidation, or negotiation, to take Canada and make it American. This was a belief he held before and after the war, and I can only imagine the personal frustration he must have felt to end up getting so outmanoeuvred, in the end, by a man on the other side of the border.

Sarah Emma Edmonds is a lesser known figure, and yet it makes her all the more compelling in the narrative. Here we have a young Canadian woman who, through circumstances, began to pass herself off as a man, making a living on both sides of the border. When the Civil War began, she joined the Union Army, serving variously as a nurse, soldier, and spy, seeing action while passing herself off as male. She survived the war, serving both as her male alter ego and as herself later on, one of a number of women doing the same who saw frontline combat. Her story is woven in with that of other soldiers. It’s estimated that anywhere from twenty to fifty thousand Canadians served in the War, the vast majority of them in the Union Army; Boyko settles on a total of forty thousand. This was despite the fact that the British were officially neutral. Some served out of principle, while others were co-opted in by unscrupulous recruiting brokers who got them drunk and ended up putting them in a uniform. Canadian boys served all over; Boyko makes note of their presence in the 20th Maine on Little Round Top during the Battle of Gettysburg. Twenty nine Canadians would win the Congressional Medal of Honour. A Canadian was among the honour guard outside the McLean home when Grant and Lee came to terms at Appomattox. And a Canadian, Lieutenant Edward Doherty, who had moved south in 1860, was the cavalry officer in charge of the troops who ran John Wilkes Booth to ground. Boyko vividly brings the story of the soldier to life in his narrative, exploring how young Canadian men violated the terms of neutrality and served through the Civil War.

During the war, Canada served as a breeding ground of Confederate plots, and into this, Boyko brings us Jacob Thompson. Once a Secretary of the Interior for the US government, he became Jefferson Davis’ point man in establishing a second front, operating from Toronto and Montreal, dispatching spies and irregular operations across the border. Coupled with the fact that arms were shipped to the Confederacy from Canadian sources (including a foundry not far from my childhood home) and that Confederate ships found safe harbour in some Canadian ports, there was some sympathy for Confederates- even while other Canadians were fervent abolitionists. Thompson stepped into all of this, operating a shadowy network of spies and saboteurs, conceiving with his cohorts a series of plots directed at destabilizing the Union, conferring with Copperhead politicians who felt that the war served little purpose. Thompson’s operations were a thorn in the side for the Union at a time when Lincoln was occupied with the war, increasing tensions on both sides of the border. It gave fuel to the annexation agenda, to the idea that Canada was the source of trouble for the Union, particularly given the two faced response from colonial officials and the British.

Boyko’s last two keystone figures are tied together, as fathers of Confederation and political rivals who had to work together to forge a country through these years. George Brown looms large in Canadian history. A politician and reporter who founded the Globe (still around today as the Globe and Mail), Brown had already served in a number of capacities in the colonial administration before the War. As a politician and as a journalist, he argued the case that to prevent themselves from being swallowed up by America, Canadians would have to forge an identity, a country, for themselves. And looking at what was happening south of the border, he saw the need for a strong central government clearly from the fact that state’s rights had been such a strong factor in triggering the war.

John A. Macdonald looms over the entire book. From the 1850s on, Macdonald was the strongest voice in colonial politics, in a variety of posts. He was something of a rascal (and a drunkard), but also a fiercely principled man and a masterful politician. As the war came, Macdonald understood that the only way to stand up against a strong Union during and afterwards would be as a united front. Like Lincoln, he concealed his wisdom behind a front of sorts- for Lincoln it was the homespun storytelling, for Macdonald, it was the drinking, which served its own purpose. He was the driving force behind Confederation, negotiating the terms of what would become a country in its own right. And he was a leader who could keep a calm head in a crisis- through the tensions of those four years and the Fenian Raids that followed, the efforts of Irish-American veterans to invade and use Canada to force Britain to let go of Ireland. We see the resourceful and ingenious Macdonald who completely checkmated Seward by purchasing and securing the whole of what is today the Canadian west and north for a pittance, bringing an end to the dream of annexation. And we see the Macdonald who- during the Treaty of Washington negotiations that would wrap up fallout of the war for America, Britain, and Canada- would stand his ground on everything, securing the future of his country.

Boyko ends up giving us an insightful book that explores in depth the complex story of the Civil War on both sides of the border. Canada rose up from that conflict, played a part in many ways. It was a time of deep tension between neighbours, when backstabbing and mutual suspicion seemed to be the order of the day. The Civil War made Confederation a necessity, driving colonial leaders with vastly different concerns to accept that survival meant joining together, and played a big part in shaping the national character. Its aftermath became the foundation for where the country would go, and the way it would relate to America in the years that followed. Blood and Daring is a well written book that offers a fresh look at both countries, and a worthy addition to the story of the Civil War. Readers from both sides of the border will come away enlightened.
Posted by William Kendall at 10:23 AM