A couple of outstanding items to be looked at before I get into anything else. First, my partner in crime Norma has been in pursuit of the Despicablimp, which has been in her part of the continent in recent days. You can find her blogging about it both at Blogger and at Wordpress, whichever happens to be your preference. Go on over, read it through, and comment!

Second, I did a guest blog for Lyn Fuchs over at his blog Sacred Ground about the 400th anniversary of Champlain coming up the Ottawa River. Head on over there, give it a read, and comment too!

Now then, today I'm doing a book review, for Barry Parham's satire You Gonna Finish That Dragon? I have reviewed Barry's twisted humor before, and you can find that review right here. The ebook itself can be found at Smashwords and over at Amazon. You can also find Barry's other works through those links.

And so, shall we begin? 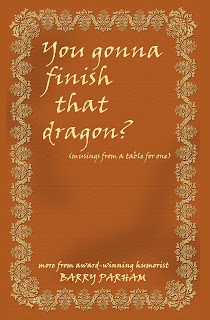 "Roses they're buying,
And teddy bears too
I think I'll order another pizza and watch the game in socks and a Nordic helmet
And nobody's all up in my face barking at me for slipping into non-rhyming  prose either."

"What can you expect from a country whose secret agents are so inscrutably evil that they captured Kiefer Sutherland during sweeps week, locked him in a secret prison, and tortured him so severely that the next season's plot contained characters who, we know for a fact, died two seasons ago."

"In a Twinkie-free post-apocalypse, what are the cockroaches supposed to eat?"

"If facebook was a country, it would be the third largest country on the planet, and Ron Paul would be demanding that we get our troops out of facebook."

"Other than one marginally actionable incident involving a staggeringly gorgeous bartender from Illinois and a bitter ferret from Charleston, I've studiously avoided activities that might result in me having to say things like 'Yes, Your Honor' and end up wearing loose fitting state issue clothing." ~ Barry Parham

These and much more are the sort of words of wisdom (and anarchy) you can expect from You Gonna Finish That Dragon? It's a new collection of columns and satire by Barry Parham, whose previous mayhem include books like Why I Hate Straws, Full Frontal Stupidity, and The Middle Age Of Aquarius. Barry tackles a broad range of subjects in his columns, compiled in his latest collection. Politics is a favoured subject for Barry, and Joe Biden is a frequent target, but far from the only one. President Obama's foibles are well on display (not to mention the irregular voting habits of the city of Chicago). And to be an equal opportunity foil, Barry pokes fun at Mitt Romney (I'll always think of him as Mittens). Not only do we get reminded of Mitt's creative ways of travelling with his dog, Barry also remarks on Romney's earlier incarnations, such as Mittus Romnius, who once saved the Olympic Games back in the days of old. Staying bipartisan in his jabs at political figures, Barry is just as likely to poke fun at Eric Holder as he is at Newt Gingrich... and yes, both men get jabbed repeatedly.

From there, we branch out into all sorts of directions. We learn the perils of eating sushi. He tells us just how abominably bad Christmas music can get, reminding us of just how much the gifts of the Twelve Days Of Christmas can end up backfiring, or noting that while My Favourite Things might have weaseled its way into the Christmas genre without reason, it's really just an excuse to shop. Barry explores the perils of single life (and the advantages) and the experiences of a regular nine to five job. And he tells us what things are like when you decide to go ahead and shave your head. He slips into his own variation on Dear Abby, giving outrageous advice and life wisdom, remarking on how a defendant can, for example, accidentally shoot a jury.

Through the book you'll learn a lot of things you might not have known. Such as why President Clinton had to pardon Newt Gingrich. The not so surprising fact that the world didn't come to an end as many thought the Mayans had predicted, and why that was a surprise to some. He explains the difference between the single guy and the bachelor, and takes us through the perils of facebook (yes, not capitalized, go over and have a look at the page. We'll wait. See? Told you). He warns of the danger of letting Martha Stewart get your phone number. And he takes us through the complicated history of the Twinkie. The sweet and delicious Twinkie. Yes, you're thinking of it right now, aren't you?

Barry Parham brings a clever way of telling a story to the table. He knows just where to put in a punchline, how to tell a joke and make it pay off. And he's got a gift for weaving current events into purely ludicrous humour. He's just as good with the slice of life side of things, the foibles of the person, and he knows how to give it all just the right balance. I found myself laughing out loud on many an occasion through the collection, and you will too.

Posted by William Kendall at 1:18 PM