How To Destroy Your Career And Reputation 101

Some items to see to before we get started today. First, go on over to Norma's  Wordpress blog or over to her Blogger page if you prefer, for her follow up on the DespicaBlimp, and give her a comment. And second, check out our joint blog, where we had fun with wedding humour.  Yes, it's Mawwiage, as Peter Cook would call it. Have a look, and leave us a comment!

Now then, you knew this was coming, didn't you? 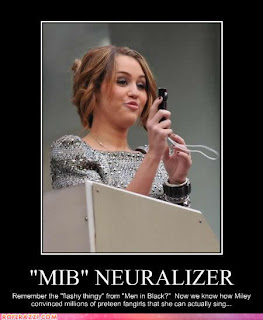 Calgary (CP). Miley Cyrus turned up in Calgary this week for a concert, mere days after her eyebrow raising appearance at the VMAs. Cyrus, the one-time Hannah Montana star, stunned audiences with her behaviour, particularly during a duet with singer Robin Thicke, in which she did lewd things with her tongue, bumped and grinded against the singer (who happens to be twice her age), stripped down to a flesh coloured bikini outfit, and pleasured herself on stage with a novelty oversized glove.

Cyrus is the daughter of infamous singer Billy Ray Cyrus, who gave the world a reason to think fingernails on a blackboard sounded better when he recorded Achy Breaky Heart. She spent her formative years being thrown into the spotlight by Disney and her parents in the Hannah Montana television show and related spinoffs and merchandising efforts. Since then, she has been spending her time living that show down, acting out in a variety of outlandish ways, trying to cast herself more as an adult figure and move her singing career in other directions. She’s also been seen at many a party, getting drunk and getting photographed in all the wrong ways. 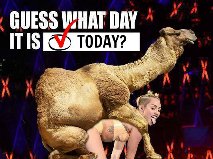 Her on again off again fiancé, actor Liam Hemsworth has seemingly had enough. He has returned to his home in Australia, and has requested the Australian government to deny Miley any entry to the land Down Under.  “He’s really just had enough of the endless circus,” Hemsworth’s agent told reporters. “Liam’s a down to earth kind of guy, and the endless cries for attention by Miley, pointless look at me behaviour, and self destructive streak was getting to him. Actually, I’m surprised he put up with it after she had a penis cake made for his birthday.”

“I don’t know what the problem is,” Cyrus told reporters gathered in a convention center here.  This reporter was among them, being punished by being made to speak with a halfwit entertainer all because he happened to break out laughing during the funeral of his editor’s mother-in-law.  “I mean, so I like to have a little fun. What’s the problem with that? And so what if I like to be a little exhibitionist? That doesn’t give Will Smith the right to judge me, after all. I mean, seriously, he’s the one who brought those two talentless kids of his into the world, and if I know anything, it’s about talentless kids.” She looked around at the reporters. “Wait a minute, that might not have been what I meant to say.”

“Miley! Miley!” a reporter called out. “Any truth to the rumour that your father is a member of the Mulletus Demonicus class of demons from the seventh circle of Hell?” 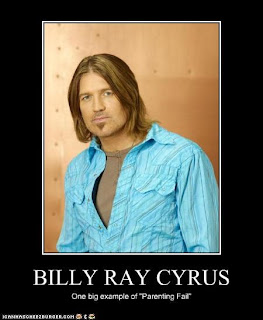 Cyrus appeared stunned. “Who told you that...? I mean, that’s ridiculous!”

“What are your plans while you’re in Calgary?” a reporter with the Calgary Herald asked.

“That was a month ago,” the Herald reporter pointed out.

“It was?” Miley seemed confused. This reporter wondered if she had already been drinking. "You don't imagine they'd put it on just for me, do you? Oh, never mind. Well, I've got a concert going on. Before then, I'll probably go on a pub crawl with fifty of my closest friends. Liam would be there, but for some reason that I don't really understand, he's not returning my calls."

“Miss Cyrus, what would you say to those who feel you’re on a road to complete self destruction?” this reporter asked. “How do you address the concerns that you need help, that these endless acting out and stunts of misbehaviour are not a good sign?”

She appeared annoyed. “I would say anyone who thinks that is sadly mistaken.” This reporter rolled his eyes. “Look, all I’m doing is having a little fun. Just like that Sheryl Crow song. You know the one that I...” Her voice trailed off, and she seemed to be looking beyond the crowd of reporters. “Hey, wait! You! Wait!”

She burst through the crowd, walking towards a Mountie who was passing through the center. This reporter recognized him. So did many others. It was Inspector Lars Ulrich, back in Alberta after being overseas assisting in the investigation of the Yorkshire Terrier Of The Baskervilles case in Britain. He saw the oncoming Miley Cyrus and the horde of reporters following her. The look in his eyes suggested he had been trying to get past the crowd unseen, and was annoyed to have been spotted.

Cyrus threw an arm around the shoulder of the Inspector, who looked around, as if seeking a way out, when the press corps surrounded them. “Hi there! What’s a girl got to do to get a Mountie up on stage during her performances?” Cyrus asked, oblivious to the expression of annoyance from the Inspector. “Listen, I’ve got an idea for a stage performance. You’re up on stage while I’m singing whatever song I feel like at that moment. I’ll be busy taking off more and more of my clothes as the song goes on... I like doing that these days, and I’m up there with two of my backup singers, and we’re all thrusting and grinding and twerking with you. It’ll be great, just great. What do you think?”

“Who the hell are you?” Ulrich asked in a low, menacing voice. Those few among the press corps who consider ourselves actual journalists stepped back.

“I’m Miley Cyrus!” she exclaimed. “Everyone knows who I am! Oh, don’t kid. You know exactly who I am. By the way, do those uniforms you Mounties wear tear off easily? Because that would sort of be the point...” 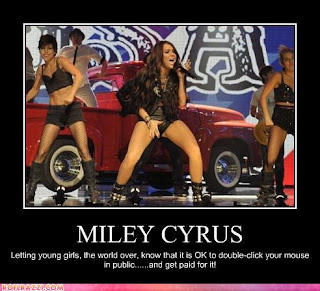 “Lars! Lars!” This reporter glanced over at his colleague from the Herald, who was speaking. Ulrich glared at him, as if wondering if he was going to ask an inane question. “Professor Tobias Merkley has made a suggestion in a column today that I’d like your opinion on. Merkley is publishing a book he calls The Fourth Wall Conundrum. He theorizes that none of this is actually real, that we are all merely fictional characters, the creation of a man typing at a computer. Furthermore, he suggests that you, Inspector, are the pivotal focus point of that man beyond the Fourth Wall, and that man enjoys torturing you by writing you into situations where you’re around entertainment reporters. What do you say to that?”

Ulrich sighed in dismay. “Are you drunk?”

“No!” the reporter assured the Inspector.

“Well, you come along on my pub crawl with my personal closest friends, the Mountie, and I, and I can do something about that,” Cyrus suggested.

Another reporter spoke up. “Lars! Alex Andrews, Hollywood Now. Will Miley be doing a duet with Metallica?”

Ulrich pushed forward and grabbed him by the throat. “I am not that Lars Ulrich, you insufferable moron!”

Andrews appeared confused. “Ah, travelling incognito, not wanting to let people know Metallica is in town? I get it, Lars. Bravo, very well thought out. But it still doesn’t answer my que..."

Andrews never got a chance to finish his question. The Inspector hit him squarely across the jaw, sending him falling into a crowd of other reporters. He dragged Andrews away by the heel, heading off in the direction of the Bow River. Miley Cyrus called after him, "So is that a no to doing a strip tease with me for the concert?" 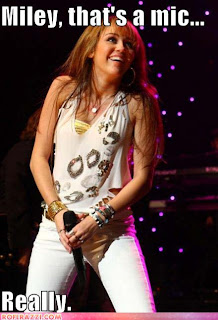 Posted by William Kendall at 10:21 AM