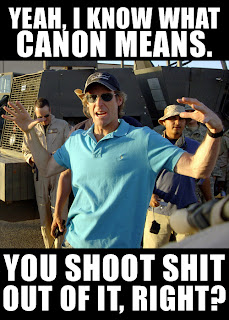 Los Angeles (AP) Touchstone Pictures and Disney Studios are backing a sequel from producer Jerry Bruckheimer and director Michael Bay, to begin filming shortly. After the spectacular failure of Bruckheimer’s The Lone Ranger at the box offices, Disney executives were quick to want to recoup their losses by setting up a sequel for a film that came out in 1997. “Yes, we’re aware it’s been awhile,” Jane Davis, an executive in the Communications department for Disney told reporters at a hastily assembled press conference. “But we’re sure audiences will flock to this film, and the passage of time has allowed Jerry and Michael to approach this story with a fresh point of view.”

Bruckheimer and Bay, who have worked together in previous films like Armageddon and The Rock, came out on stage, waving to the crowd. Bay stopped to admire himself in a pocket mirror he kept in a jacket pocket, and flashed a smile at the crowd. Bruckheimer took to the podium. “It’s a pleasure to announce our joint venture today. You know, it’s been awhile since Michael and I worked together. And we didn’t get a chance to shoot the first film together. I had Simon West direct that one, but I wanted Michael to direct this one. And he was raring to go." 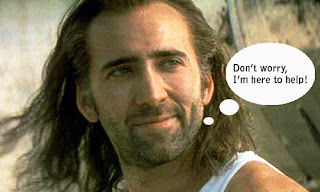 “Of course I was,” Bay remarked. “I would have loved to have filmed the first one. I mean, Con Air was right up my alley. Lots of explosions, lots of rock music, lots of mayhem and chaos, and Nic Cage. How could anything go wrong with that? At the time though I was really busy, so I couldn’t get in on it, but Jerry told me the story for this one, so I knew I had to get in on the ground floor.”

Bruckheimer nodded. “So today we’re announcing Con Rail, for a Memorial Day weekend 2015 release. We’ve already cast Nicolas Cage to return as Cameron Poe, and Monica Potter as his wife Tricia. They’re settled down and happily married, running a bed and breakfast in Illinois. There’s a bit of family tension, though. We can’t have a movie like this without dramatic tension. They’re on a rail trip west to attend their daughter Casey’s wedding.” 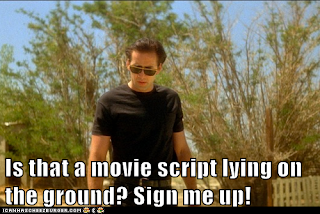 Bay smiled. “You see, Casey’s never been that close to her daddy, who was in prison for the first few years of her life. And the trauma of first meeting him all bloody and battered, and him giving her a soggy stuffed animal as a hello gift, well, it’s created this emotional wedge between daughter and father. So we’ve got that human interest dynamic storyline that’s sure to win this film a lot of Oscars.”

“Yes,” Bruckheimer agreed. “For some reason, the Academy refuses to give us Oscars. I don’t understand the reason. Maybe they take pity on the other films and decide that we don’t really need Oscars.”

Bay shrugged. “They’ll get around to it. Anyway, for reasons we won’t go into here, the train they’re on gets hooked up to a couple of train cars holding convicted criminals, for transport west to a Supermax prison. We’re talking the worst of the worst. Murderers, thieves, drug dealers, arms smugglers, jaywalkers. It’s all under the orders of Agent Duncan Malloy. Yes, we’ve got Colm Meaney back from the first film too, and he’s as cranky as ever. Last time out you might remember his sports car was demolished. This time we’re going to have his luxury speedboat destroyed during the film. And John Cusack’s back as US Marshal Larkin. Long story short, among the convicts being transported west is Cyrus “The Virus” Grissom’s twin brother Brutus Grissom. Yes, we’ve got John Malkovich back to play this new character, and believe me, he’s even nastier than his brother." 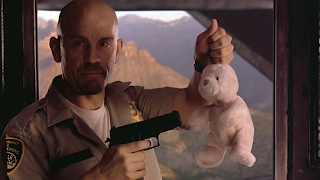 Bay smiled, and continued. "So once he takes over the train and learns that the guy who killed his brother is among the civilian passengers, he’s looking for some payback. And we’ve got some of Hollywood’s biggest character actors agreeing to play other convicts in Grissom’s gang. Steve Buscemi is back as Garland Greene, because let’s face it, you can’t have a film like this without that character. And we’ve got Woody Allen as a white collar convicted accountant, Delroy Lindo and Josh Brolin as bank robbers, Vince Vaughn in the cast as a smartmouth convicted jaywalker, Owen Wilson as a serial killer, Seth Rogen as a drug dealer, Robert Pattinson as a sparkly wannabe vampire, and Rob Schneider as a crime lord. You’re talking about the best of the best in dangerous lunatics, all in one train. Mind you, some of these actors we had to pull strings to get them to join the cast. John Cusack had to have his arm twisted before he’d commit to reprising his role. So we had a guy named Buford twist his arm.”

Reporters were stunned. One reporter from Reuters asked, “Mr. Bay, somehow I doubt Amtrak would allow one of their trains to be hooked up to rail cars containing dangerous convicted criminals.”

Bay waved that off. “Details. Don’t bore me with the facts.” 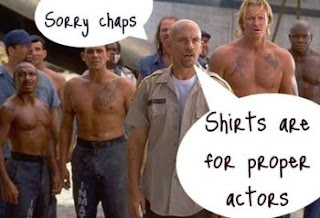 Bruckheimer nodded. “We’re going to have a big rocking score for the film too. Hans Zimmer, Trevor Rabin, and Harry Gregson-Williams are going to work together to give us a score that’s going to blow your mind. Not to mention your eardrums. And since we work a lot of rock music into our film, there’ll be plenty of that too. Aerosmith is going to write a new song for the film. Something that’s just right for the emotional context of the story. And since most of the action’s going to take place in Colorado, we’re going to see if Lynyrd Skynyrd will do an updated song, Sweet Home Colorado.” He grinned like the Cheshire Cat.

Another reporter spoke up. “You do realize three of the original members of that band died in a plane crash, right?”

Bay sighed. “Look, that doesn’t matter. What matters is we’ve got a chance to do a lot with this film. Big explosions, speed boats getting destroyed for no reason, loud noise, heavy gunfights, nasty villains, and a heroic former army Ranger with strange hair. This is the kind of film Hollywood wants. This is the kind of picture that will sweep the Oscars. Nicolas is ready to go, and we’re eager to get this baby filmed. In the summer of 2015, everyone’s going to be talking about this film. Can I hear a hell yeah for Con Rail?” There was no response from the reporters.

“Well, we’re about through here. If you’ll excuse us, I’ve got a session with my hairdresser. Looking this good takes work, you know...”

Bay and Bruckheimer left the room. Reporters quickly started talking amongst themselves, wondering why, after sixteen years, there was a need to make a sequel to Con Air.  In the opinion of this reporter, Hollywood has officially run out of ideas. 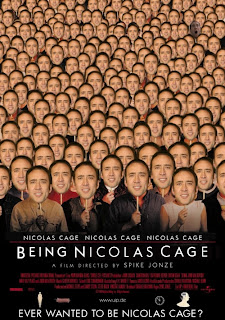 Posted by William Kendall at 6:40 PM