The Curious Case Of The Purloined Stanley Cup

Before I get started, check out our joint blog, where we did an image blog of a place in Norway. We may write this breathtaking place into a future work in our collaborative novels. Just be warned: if you've got a fear of heights, you might have problems! 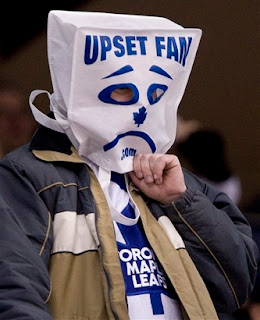 
Toronto (CP) The championship trophy of the NHL is back safe in the Hockey Hall of Fame after a brief theft of the Stanley Cup. The trophy, which is awarded to the team winning the championship each year, was held hostage for seven hours by a group collectively calling itself LeafsNation1967.
Officials at the Hall of Fame confirmed that the Cup was stolen in the early afternoon by a coordinated effort of several masked individuals wearing Maple Leafs jerseys. A recording was uploaded to the internet later in the afternoon, featuring the crooks holding the Cup hostage, issuing a manifesto of sorts. Each of them were masked, each still wearing jerseys, each clutching bottles or cans of beer.
“We demand respect for the Toronto Maple Leafs,” one said, in between drinking gulps of Molson Canadian. “We’ve bled Leafs blue all our lives, and we’ve been fans before we were even born. It’s a disgrace that they haven’t been back in the playoffs for years now, and even more that they haven’t won since 1967.” The team itself, of course, has missed the playoffs yet again, and recently apologized for it in what most observers are agreeing to be a meaningless, insincere gesture that counts for nothing. 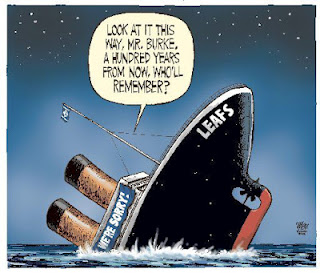 “So this is the situation,” the man continued. “We will take the biggest prize in hockey, the Stanley Cup, and we will have it melted down. Unless you give into our demands. First, we want the Maple Leafs to be retroactively declared winners of the Stanley Cup in every single year since 1967. We don’t care who supposedly won the Cup, it belongs to us! To our boys! Not to some Red Wing or a Bruin or an Oiler or a Canuck or... even worse, those bloody Habs! It’s ours! So you will re-write the records and make the Leafs the winners every single year since then. Second, we want our boys to get an automatic pass on every single round of this year’s playoffs. I don’t care who has to get kicked out, they’re in. And they get to skip every single game right through to, oh, the final five minutes of the last game of the last round! And they get credited against whatever team they’ll be playing for a score of ninety to zero. If the demands of LeafsNation1967 are not met, you can kiss goodbye to your Cup!” 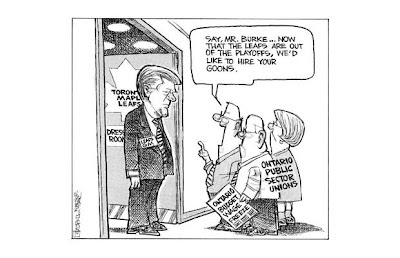 Police have confirmed that the group was quickly found and rounded up. Legendary RCMP Inspector Lars Ulrich, who was in town on personal business, joined the investigation, and singlehandedly tracked down LeafsNation1967, saving the Stanley Cup, kicking butt, and taking names, according to Toronto police spokespeople.
“It’s no big deal,” Ulrich told reporters while the bloody and battered seven men were being charged and booked at 52 Division. “First, they were drunk. Second, these are fans of the Maple Leafs. Let’s face it, Leafs fans are pretty stupid to begin with, so finding this bunch of nitwits was easy.” 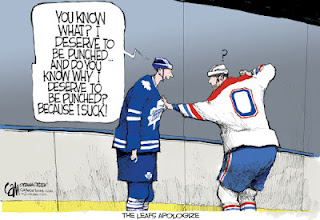 “Lars! Lars!” This question came from a member of the Entertainment Tonight crew, who for some reason had come in to follow a sports story. “Do you think that the time you spend moonlighting as a policeman takes away from your time with Metallica, and what does that mean for the band? Are you breaking up?”
Ulrich’s eyes seemed to narrow. He glared at the correspondent as if estimating how long it would take to reduce him to a pile of broken bones. “I’ll say this once, you brainless little punk.” The tone of the inspector’s voice would have sent the Devil himself running. “I am not that Lars Ulrich.”
“Are you sure? Our producers said that....”
The correspondent didn’t have enough time to finish the question. Ulrich plowed through the crowd of reporters, ready to bludgeon his target. The correspondent bolted for his life. He didn’t get far; Ulrich caught him and started pummelling him.
In the opinion of this reporter, the brainless little punk had it coming. 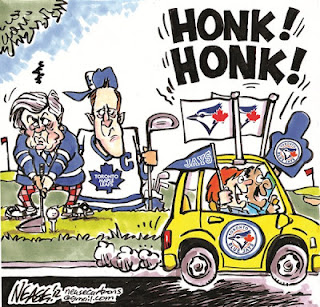 Posted by William Kendall at 11:07 AM