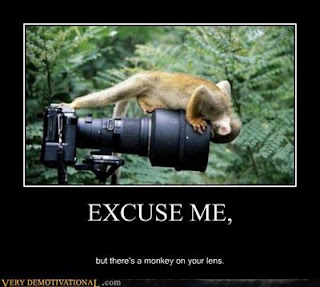 For a good long while, I've been a staff member at Comixfan (totally shameless plug here). Among the things I manage there is a weekly column we call Pick Six, which you can find right here. Each week, we do quick blurbs on six of the week's releases. For awhile now, I've regularly made references to marketing chimps in my blurbs, which is drawn out of my dismay at the direction of certain books that seem to be run not by the writers, but by marketing idiots who like to think they know everything about everything. The phrase has stuck in my head, and is a fairly good catch-all, I think, for marketing types in general. They do tend to make a lot of noise and fling a whole lot of crap around. It seems entirely reasonable, therefore, to add on the second primate. Editors, by extension, are editorial gorillas.

Yes, I know, I do some editing myself. I can see the irony.

Anyway, as such, I thought I'd share a couple of blurbs from recent weeks, which I wrote in the form of a conversation between two marketing chimps over two new releases. Enjoy, and let me know what you think!


A conversation overheard at Marvel between two marketing chimps....

"Hey, Bob, we've got that Avengers movie coming out in May."

"That's right, Jack. Looks like Herr Oblast Quesada wants to have a tie-in somehow to the comics."

"Well, we can't just go with renumbering one of the series again for the 47th time, can we? We just did that last year. Or was it the year before? It's really hard to keep track of these things what with all the extra issues we do."

"Maybe we can have yet another book with the Avengers. We've only got four of them right now. And to make it even better, have the characters from the movie on the team, only make them the regular Marvel Universe characters."

"Genius! That's brilliant! And to make it even better, we'll have Bendis write it!"

"Great idea! Herr Oblast Quesada's favourite writer! Oh, sure, he annoys a bunch of readers with his complete disregard for continuity and anything done by any other writer..."

"Not to mention his tendency to write all characters as if they're just parroting his words and his way of making characters talk on and on and on for no reason at all. And we've got all this hate mail about him making his Mary Sue character Jessica into the center of the universe."

"To hell with all of them, Bob. We'll just bring in Mark Bagley on art. His sheer awesomeness will more then compensate, right?"

"Great idea. Now what about the title? We can't really use Mighty Avengers again, can we?"

"No, and by the same token, Avengers: Squeezing Every Cent Out Of The Reader would be pushing it. Same with Avengers: Yes, These Are The Same Characters From The Movie, Just Not The Same Continuity."

"Oh, I know! How about Avengers Assemble?"

A conversation between two marketing chimps at Marvel...

"Hey, Jack. You hear the news? Herr Oblast Quesada wants the Avengers and X-Men to star in this year's big crossover."

"Wow, Bob. Who are they going to team up against? Kang? Terminus? Doctor Doom? Doctor Bong?"

"No, he wants them to fight each other."

"Each other? Who wants to see heroes fight heroes? We already did that a couple years back with Civil War, and look how that turned out! I take it there's some big misunderstanding that gets them all in each other's faces before they have to team up to stop Galactus or the Celestials or the White Rabbit?"

"No, he just wants them scrapping it out with each other. Seems he wants the Phoenix to be the sort of kind of Big Bad that divides them."

"Oh, I get it. Herr Oblast Quesada does have that seething hatred of redheads, after all. That's why he had the Parker marriage obliterated, after all. I'm just surprised he's bringing back Jean Grey. Didn't he issue the Jean Grey Will Stay Dead As Long As I'm In Charge edict five years back?"

"Apparently the Phoenix isn't going to be tied into Jean. It's that Hope kid who's the target this time. You know, that baby that was born a year ago in Marvel time and is now all grown up into an annoying fifteen year old?"

"Good God, not that pain in the neck! Hmmm, well, who's he going to have write this thing?"

"He wants all of the Architects to take turns. That's what he calls the Inner Cabal, remember? So Bendis and that whole lot are going to take charge. It also means lots of crossovers into lots of titles. And he wants to kick it off with a Zero issue prologue, and a tie in miniseries or seven of them. Lots of different ways to drain money out of the fan's wallets. No word yet if there'll be an Avengers vs X-Men Frontline miniseries featuring that Sally Floyd character getting all sanctimonious again."

"With good reason, my friend."

"I wonder how this whole event will end."

"The same way all these events end. Just as mere setup for next year's Big Event."
Posted by William Kendall at 10:47 AM