Wrath Of The Cheesy McCheese 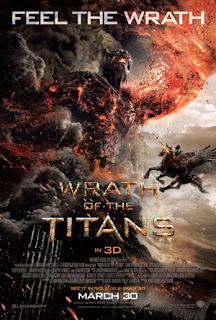 When I was a child, I was fascinated by the stories of Greek mythology. It probably started with a book on the subject by Ingri and Edgar Parin D'Aulaire, a husband and wife pair who wrote and illustrated children's books on myths and legends, among other things. I devoured as much as I could on the subject of Greek gods, heroes, and monsters, and the fascination has continued on ever since. I remember occasional visits to the Royal Ontario Museum (a place I really must revisit post haste) and peering at old Greek vases with imagery out of mythology etched onto each of them. 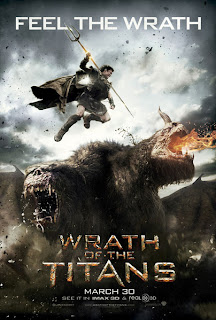 Well, let it not be said that Greek mythology isn't a source for Hollywood inspiration. It's a trend that comes and goes; the films which owed much to the work of special effects master Ray Harryhausen mined the stories decades ago, and in more recent years, we've seen a bit of a return to the genre. Not always for the better, however. Troy refashioned the story of the Trojan War. 300 mixed together history and ridiculousness (believe me, I hate that movie) to tell a story based loosely on the last stand of Spartan warriors against an invading army. And Clash Of The Titans was a remake of the original, the last major work done by Harryhausen himself.


Both versions were loose adaptations of the Perseus myth, the more recent version even looser. By the end of that film, Perseus (Sam Worthington), having slain the Medusa and the Kraken, turns his back on his godly father Zeus (Liam Neeson), not to mention the mythological bride he was meant to be with, Andromeda, for a quiet life with Io (Gemma Arterton). In the myth, of course, this was pretty much the last we really see of Perseus, settling down to a life with Andromeda as a king and queen. Instead, the demonic studio executives (homo studious demonicus) decided to mess with the myth and make a sequel. The first film, cheesy and overblown, got something of a mixed reaction among audiences and critics back in the day; it got a quick glossover in the 3D format at the time (damn you, 3D technojunkies, why can't you just crawl back into the hole where you came from?). The studio execs figured, hey, why not bring it back again?

The result is Wrath Of The Titans. The film picks up several years later. Perseus (still Worthington, more's the pity) is living a quiet life as a widower with a son, Helius. His erstwhile dad comes to see him, telling him that the power of the gods is decreasing, thanks to all those thoughtless mortals not paying much homage as they used to. Perseus, who's had a mad-on for the gods and his dad most of his life, doesn't really care. Zeus and Poseidon (Danny Huston) descend to meet with their brother Hades (Ralph Fiennes); the three brothers  have the look of Jerry Garcia going on with the whole long hair and scraggly beard thing. You're half expecting a Grateful Dead reunion. Zeus and Poseidon are betrayed by Hades and the war god Ares (Edgar Ramirez), who plot to remain immortal by draining Zeus to revive the father of the gods, Cronos, one time leader of the Titans back in the day before Zeus beat down his daddy....


Zeus is held captive. The wounded Poseidon escapes. Lots of Big Bads start to escape from the underworld, including one that destroys Perseus' village. Poseidon fills in his nephew on what's happening, and insists that Perseus must stop the machinations of Hades and Ares. To do so, he needs help, enlisting Queen Andromeda (the lovely Rosamund Pike, in a recast), Poseidon's son Agenor (Toby Kebbel, channeling the world's most annoying man, Russell Brand), and Hephaestus, the ingenious engineer of the gods, the lord of the forge. It's the last one of that trio who knows the way down into Tartarus, and who's all too briefly played by the always outstanding Bill Nighy. Perseus, Andromeda, Agenor, and a team of soldiers (soon to be monster fodder) are kitted up and led to the entrances into the underworld by Hephaestus, and down they go to their destiny.

Really confused yet? Join the crowd. The film works, I suppose, as pure fluff and popcorn entertainment. Beyond that, it's not to be taken seriously. Director Jonathan Liebesman steps up to helm the sequel, and it's a bit of a muddle and a mess, with some assets and some liabilities. First, the liabilities: the special effects are a clutter, feeling not particularly well done. I chose not to see it in 3D, a format that frankly leaves me with a headache. It's a bloody annoying gimmick, and Hollywood really, really has to stop using it. The special effects themselves were inconsistent, and that's headache enough.

There are a series of monsters and beasts throughout- chimeras, cyclops, and a minotaur, for example (what with Perseus' story ending after saving Andromeda, for the most part, they had to borrow beasties from other myths altogether). Sometimes these creatures worked well. Other times, their sense of scale or design was completely off. The minotaur, for example, didn't work at all for me; compare it, for example, to the minotaurs we see in the Chronicles of Narnia films. I can't recall offhand how much of the Narnia minotaurs were CGI as opposed to elaborate costuming, but those ones looked exactly like you'd expect them to look. Not so with this film, where the look of the minotaur just doesn't pass muster; it's quite disappointing. Another problem I had was the sheer amount of noise through the film. It felt overwhelming at times to say the least. Are the sound mixers trying to make the audience deaf? And the musical score, as in the first film, was undistinguished. I'd have to listen to it isolated to see if it has any merit.

The trip down into the underworld felt interesting at times and at other times jarring and claustrophobic, a dizzying maze of special effects that at times felt a bit too much (I'd feel sorry for anyone watching it in 3D) like a Michael Bay film (and pretty much everything Michael Bay has done in the last decade is obnoxious). And by the time we finally see Cronos, a mountain of smoke and volcanic fire who's been held captive for however long, the Big Bad just doesn't work. I found myself contrasting what I was looking at with Lord of the Rings. Where the Balrog demon in the first film, a creature of fire and shadow deep in the mines of Moria, was a CGI effect that nonetheless felt very real, very much there in the moment with the members of the Fellowship, that's not at all the case in this movie. Cronos as a Big Bad never feels as if he's occupying the same space as our hero. That's a CGI special effect gone terribly wrong.

The other outstanding liability lies in one cast member: Sam Worthington. He made it big because of Avatar (a film that I hate far more then 300; it makes my dislike of that film feel like affection by contrast). And since then he's been in a number of high profile films, including the first of the Titans films. This is an actor who's so painfully one note that he can bring a film crashing to a halt singlehandedly. He's a wooden actor who looks perpetually confused (not a difficult prospect for him, I'd reckon). He has no sense of presence in a film, just an empty cipher. I kept thinking back to Terminator Salvation, where his character is surrounded by better actors, and how outclassed Worthington is in better company.  As with the first film, the pattern repeats itself here. Worthington looks confused, blank faced, or annoyed through the whole thing. He's just not believable in the role... let alone any role. He's dull and completely uninteresting, and Hollywood needs to stop giving this guy roles. I mean right now.

I did say something about assets, and so the film does have that. Liam Neeson and Ralph Fiennes chew the scenery as well as ever, playing out their sibling issues as brother gods on opposing sides. Ramirez is a suitable choice for Ares, who tends to be a sneering, ruthless sort of war god in the original myths as it is (and regularly a whining, overbearing brat, at that). Nighy and Huston are, as is so often the case, consummate professionals who are typically the most interesting parts of a film. It's a shame we don't see more of them. And Rosamund Pike is, as ever, fascinating to watch on screen.

Whether or not you want to see the film depends on your mindset. If you can put up with Worthington of the Blank Faced Expression, or the dizzying and inconsistent CGI. If you can find a version in regular 2D. If you go in with no real expectations of film genius. If you don't mind a cheesy film every once in awhile. This one will do it for you. 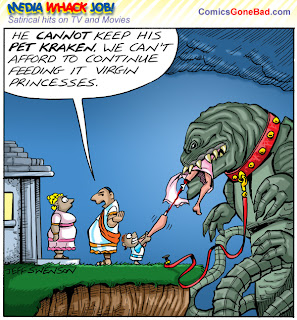 Just trust me. It is cheesy, and it does get messy. Especially with cranky lava Titans getting all fussy and annoyed with blank-faced heroes who have less personality then the winged CGI horse they're riding in on... 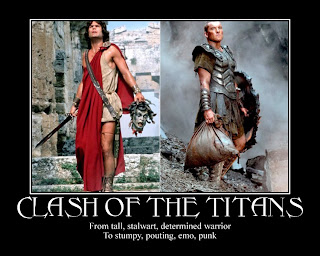 Posted by William Kendall at 3:41 PM