A Tweedledum Runs For Mayor

It has been awhile since I last brought up politics in Toronto. After the death of the late and totally unlamented crack smoking ex-mayor Rob Ford, I assumed sooner or later his enabler in chief brother Doug would be announcing his candidacy for whatever elected position caught his eye, being that the Ford family are gluttons for attention and seem to believe they're destined for greatness. Recently Doug the Thug announced he's running for mayor of Toronto again, after losing in the last election. This is my response. 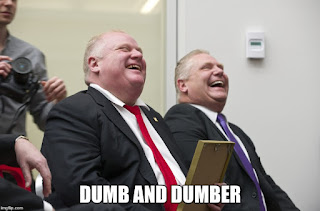 Toronto (CP). Doug Ford, the former city councilor, failed mayoral candidate, and brother of the late and unlamented ex-mayor (and crack smoking drunkard) Rob Ford, recently announced that he will be having a second shot at the mayorship in 2018 at one of the family’s “Ford Fest” barbecues before a number of deluded “Ford Nation” acolytes. Ford, who picked up his brother’s banner for the mayorship in the last election when Rob Ford was sidelined by the cancer that would take his life, failed to beat John Tory, who won the mayor’s job in the election and has been relatively scandal free ever since. 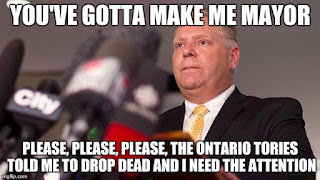 The Ford brothers, who spent four years side by side as mayor and councilor, also spent those four years running through an endless series of gaffes, arguments with the media, criminal investigations, addiction scandals, corruption allegations, sneering at and hassling anyone who disagreed with them, and making an ass of themselves on a daily basis, were something of a precursor warning to American voters (who obviously didn’t take the lesson): don’t vote for a crude, unfit for office idiot like this. Isolated halfway through Mayor Ford’s term when the rest of city council voted to remove much of his powers as a mayor, Rob and Doug spent their time lashing out at enemies real and imagined, while still retaining undying loyalty from the hardline supporters who called themselves Ford Nation. 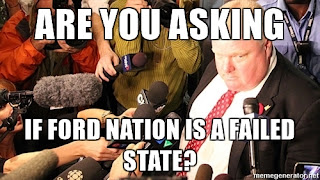 Doug Ford used the occasion to kick off his campaign- even though campaign rules for the city explicitly state that campaigning cannot begin until May of 2018. It’s been said that he was quietly told by the provincial Conservatives that he is not welcome to run for them in next year’s elections, over concerns that he would derail their entire campaign by himself. Speaking on condition of anonymity, one of the party insiders admitted, “Look, the guy’s a complete ****ing *******. We’ve already got enough of those in the party and we don’t need any more. Wait, did I say that second sentence out loud?” 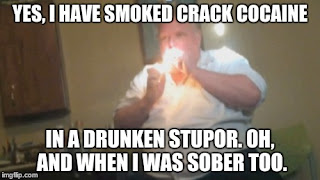 “It’s like this, folks,” Doug blustered at a community center in his stronghold of Etobicoke, his nephew Michael Ford (a city councilor who weaseled his way into his late uncle Rob’s former city council seat) at his side. A number of Ford Nation supporters were in attendance, holding up signs and doing the wave. “This city needs to get off the gravy train, folks. Just like Rob said. We were gonna make it big and bad and it was gonna be great, cuttin' out all the gravy and the cesspool and the swamp and the muck and the…. Well, you get it, right, folks?”

The crowd lapped it up and applauded, with chants of “Doug! Doug! Doug!” and “Ford More Years!” Ford smiled in that peculiar way of his- the smug look, the dead eyes- and put up a hand to quiet things down. 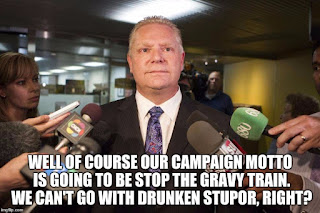 “You know what, folks?” Ford carried on. “We’ve got a city here that needs a strong leader. A tough leader who knows how to make the right calls, right folks? We don’t need no downtown elite library using wine tastin' ****ers to tell us workin' stiffs what to do.” Referring to himself as a working stiff is rather ironic, given that the Ford children are rich- thanks to inheriting from Daddy. Just how rich is a question none of them seem inclined to answer. “We don’t need no education! We don’t need no self-control! That’s how those lyrics go, right? What we need is someone to come in and get things done! We need to gut the city bureaucracy and the transit system and the libraries and all that extra ****in' crap that nobody gives a damn about! Enough with the war on cars! Enough with the war on the suburbs! Enough with the war on the Fords! It’s time to Make Toronto Great Again! Yeahhhhhhh!” 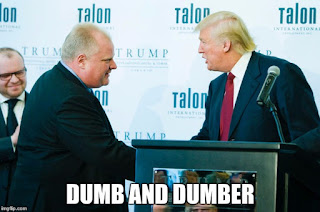 Invoking a Trumpism is ironic, but not surprising, coming from a Ford. The Ford boys, glorified bullies and drug dealers and or users, aren’t all that different from the current occupant of the Oval Office, after all- spectacularly unfit for office. The rally continued with Doug Ford still at the podium, starting to sweat. This reporter idly wondered if he’d ever seen a heart specialist. Like his brother, Doug Ford didn’t seem like the sort who took care of his own health. 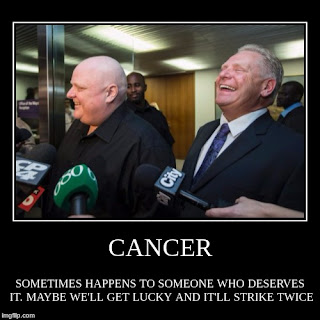 “Here’s the thing, folks,” Ford said, as the crowd quieted. “Next year we’ve got a chance to come into City Hall and start kickin' ass and takin' names. We’ve got a chance to knock that champagne guzzlin' commie mayor Tory outta office, and kick almost all of city council out at the same time. Get rid of them socialist left wing fascist ****ers! Let’s get things done! Because remember, folks, and this is what I’m going to keep hammerin' home to you every single day for more than a year- because let’s face it, I’m already campaignin' here, and I don’t give a **** about the rules that say I can’t campaign until next year. **** the rules! So let’s remember this, folks… if you vote for Doug Ford as your mayor, folks, you’re doin’ a great ****in' thing for this ****in' city. But if you vote for anybody else…. Well, that means that you’re votin’ against me and Rob and his great sainted memory. That means you love cancer. What kind of despicable sick mother****in' sonuva***** loves cancer?” 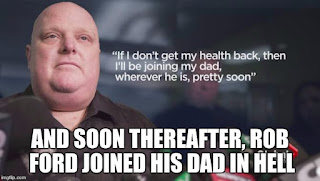 The last word comes from Hell itself. Rob Ford, currently spending the rest of eternity in the pits of despair and infernal darkness, was reached by phone from the infamous crack house in his old stomping grounds, which among other things contains a direct line to the Nine Circles Of Hell. “Dougie’s running?” he asked upon being reached. “Oh, good! That’s great news! Maybe he can talk, I don’t know, the Pope into gettin’ me the **** outta here. I don’t belong in Hell! I’m supposed to be the ****in' mayor of Heaven! I was supposed to rise again from the ****in' dead on the third ****in’ day, mother****er! Do you realize there’s no ****in’ crack, booze, or hookers down here?” 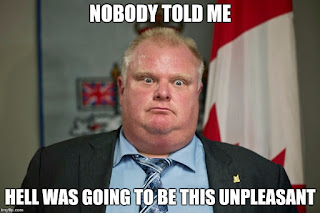