Vengeance Has A Really Weird Name

I have something different today. It's a bit of a writing exercise in the first person. I don't know if she'll end up being an antagonist or perhaps a protagonist. Her voice came across strongly as I wrote though. 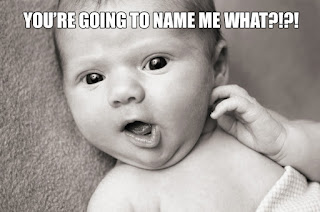 You wonder what they were thinking, naming me that.

For years on end when I was a child, whenever I would complain about it, my parents would just sigh, roll their eyes, and then tell me that they had no choice. They would say that they were bound by the terms of the bet and had to go through with it.

A bet? Seriously? You expect me to just accept you couldn’t tell the bastard who won the bet to go to hell?

No court would make you go through with the bet to name your daughter that. It’s not enforceable. 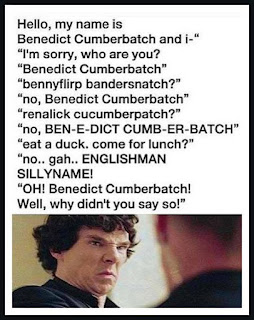 Oh, but no... my parents were too buddy-buddy with the bastard to go back on a bet. Dad was fishing buddies with Charlie, after all, and in Dad’s mind, you stay buddies with the guy you go fishing with. Uncle Charlie, as he liked to be called. Uncle Asshole Charlie, as I tended to mutter under my breath when I was in my teens. I mean, if he’d actually given a damn, he would have never insisted on the terms of that bet. Instead, he happened to win a Super Bowl wager when Mom was pregnant with me, one that resulted in Mom and Dad naming me whatever Charlie wanted when the time came.

Between us, I was glad when, at I was fifteen, Charlie met a bad end when a great white shark decided to take a bite of him off the Carolina coast when he was on a fishing trip. I like to think he died screaming in agony.

Dad and Mom went to the funeral, said their condolences to Charlie’s wife and kids. Obviously it was a closed casket sort of funeral. Kind of hard to have an open casket when you haven’t recovered the deceased’s leg, and there’s only so much a mortician can do to hide the visible scars of a shark attack. I was too busy in school to attend, but I remember thinking that day- Shark: 1, Charlie 0. 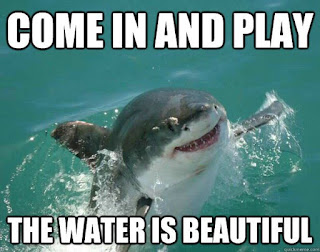 A morbid thought. Maybe it makes sense with the path I ended up following.

So yes, I resented my parents growing up. Saddling me with that name. You’d resent it too.

Who the hell names their kid Misery?

Oh, Mom and Dad would say, “well, dear, think of it this way, Stephen King gave that name for the character who was a book within a book. Isn’t Stephen King cool?” Well, maybe he is, but naming me for a fictional romance novel character created by the writer protagonist in a fictional novel by a horror writer isn’t why you named me that. You named me that because you lost a bet you made over a stupid football game with an idiot. 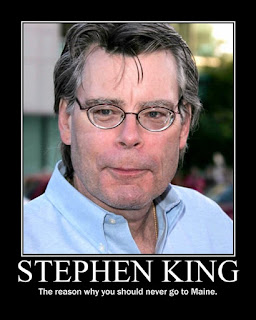 Do you have any idea how much I was hassled as a kid? Other kids teasing me over my name. They were merciless. You try going through elementary and high school with the name Misery and see how you like it.  Little wonder that I tended to be a loner, isolated, anti social. I had my goth stage, my emo stage, the whole nine yards. Black clothing, death metal, sullen stares. I got into my fair share of fights. Won them too. It got to the point where other students were starting to get the hint: don’t piss off Misery Frost. They stopped hassling me, but started calling me the Ice Queen. Totally cold, totally hostile, can’t be defrosted... I’ve heard them all. Hell, maybe that was right.

So yes. I did resent the hell out of my parents. Naming me that. Subjecting me to years of teasing over a bloody name. Which probably explains why I wasn’t exactly choked up first year of college when I got word that they’d been killed in a car accident. Drunk driver. He died too, otherwise he might still be in prison today. 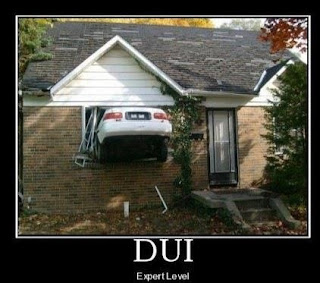 Sure, I attended the funeral. Looked all suitably sombre. Didn’t feel much of anything. Oh, people say, “I’m so sorry, please let me know if there’s anything I can do.” But it’s not as if any of them really cared less. At that point I was so socially isolated that I could have dropped off the face of the earth and none of my parents’ circle of friends would have ever noticed.

So I moved on. Inherited a pile of money. One side benefit of coming from wealth. I consider it a severance payment for years of putting up with a bad name. Returned to college, kept at that, ended up finishing my degree, more for the sake of just getting it than anything else. With all the money to my name, it wasn’t as if I needed to work.

Then one day I decided to go through legal proceedings to change my name. Simple, right? 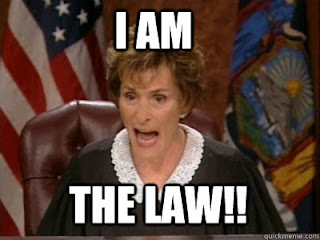 What did he do?

Laughed in my face.

He was practically falling off his chair laughing. He went red faced, laughed so much that he was practically teary eyed. Then he composed himself, smiled, and refused. He told me I should just learn to live with it.

That’s the first time I ever killed anyone. 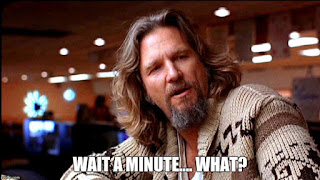 Didn't see that one coming, did you?

Oh, I didn’t do it right there. I mean, come on, there were witnesses, after all.

I was smart about it. Acquired a gun. And a silencer. Taught myself how to shoot. I stalked him for a few days, learned his routine, scoped out his neighbourhood. Who’s likely to be out and about? What are the sightlines? What are the fastest ways out?

Then one night, when he was coming home, I watched from the shadows as he stepped up to his front door... and shot him from behind. Two bullets in the head.

Down he went like a brick. The silencer worked nicely- barely a hint, sounded like a cough. Nobody heard a thing. No barking dogs, no neighbours putting out their trash for recycling. Nothing. I just walked away into the night, pleased with myself. That was the last time he’d ever laugh at anyone. And no one saw me do it. 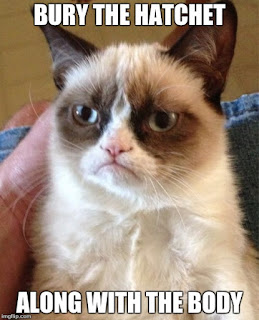 Or so I thought.

A day later, with the news still covering the investigation into his death, I got a visitor at my door. He was a few years older. The sort of face you’d look at and forget. Short hair, pale eyes, dressed casually. He introduced himself just by his surname. Lawson. He told me that he saw what I did.

And then he offered his services to teach me.

It turns out I wasn’t the only one out to kill the judge that night. Someone had contracted Lawson to do the same.

Lawson, it turned out, was a professional assassin. 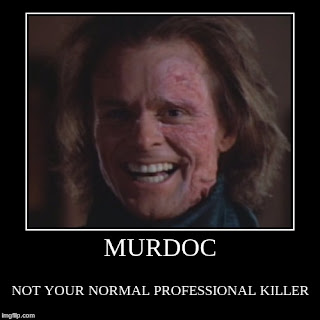 He’d been hired to take out the judge by a contract employer over a tax case. He’d been doing the same thing as me, stalking the judge, choosing a time. He was better than stalking than me- I never saw him. He noticed me though during those nights of stalking the judge. Wondered what my game was. He said he learned that very day that the judge had laughed me out of his court room. That night, he was prevented from moving in on the judge simply because I did it first.

He told me my instincts were good. I was careful about it, methodical. Covered my tracks nicely, did everything I could to confound the forensics and the cops, and that the old bastard had it coming. He said watching me kill the judge left him impressed. Asked if I regretted it or felt ashamed. Truth is I felt nothing more than satisfaction at a job well done.

Lawson took me under his wing. Showed me the ropes of professional assassination. Methods of taking a life, methods of covering your tracks. Weapons techniques, police response, laundering your money when you get paid. How to get contracts- I mean, hiring yourself out as a killer is not the sort of thing you list on Kijiji. How much to charge- or those cases where you did it pro bono. Lawson pointed out that there are certain people in life who are just so awful that taking on a case for free is a good thing. He taught me well. Even suggested that I can take a certain pride in my name. Misery can bring misery into the lives of others, after all. He could relate to disliking his name- his parents saddled him with the name Hugo, after all, so that’s why he preferred being called by a surname. 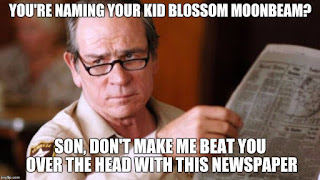 Lawson was a good teacher. He’s still out there, still taking contracts like I am, still holding to high standards in the assassin game. I’ve developed a rep in my shadowy world in the years since Lawson taught me the tools of the trade. I’m good at what I do. A professional with a strict eye on being methodical and getting it done right. And it’s paid off- my wealth has grown and grown time and time again. Assassination pays in dividends. You can be offing a wealthy stock investor in London one day, and sipping a margarita on a beach in the Caribbean the next day.

The Ice Queen, I’m called by my colleagues in the world of professional hitmen. A dark and murky kind of world where you keep your secrets close to the vest. But they call me that with respect. I can live with that.

Call me Frost. Just don’t call me Misery. Trust me, sweetheart... you don’t want to irritate me. 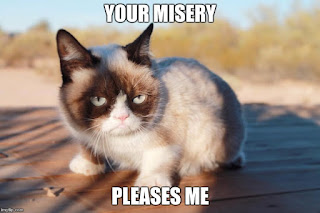