The Scammers Out In The War Zone 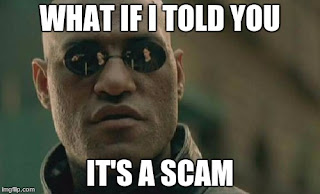 I've written about them before. I'll write about them again. The spammers and scammers, the dregs from the seventh circle of hell who constantly try to irritate us with spam or scam email or comments. Most of the spam of course automatically gets shunted to junk email or to spam comment folders in blogs, but every once in awhile, one gets through. I can think of one (or two or three, it depends on if it's just the same person using three different online aliases) who's written on topic comments in my photoblog recently, as well as other photoblogs- but then goes and adds links to sites for gambling in far east Asia, Thailand movies, or anime. None of which I'm interested in. So even though those spam comments did get past the filters- they don't stay published for long.

And then there's the following message, sent to me recently through email. It turned up in the junk folder, which I check anyway- you'd be surprised how often junk email contains things that aren't junk. This one, though claiming to come from an American soldier, carried an IP address on it that routed to Japan. 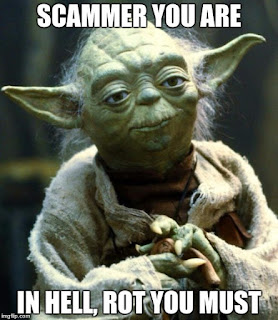 Good day and compliments, I know this letter will definitely come to you as a surprise, but I implore you to take the time to go through it carefully as the decision you make will go off a long way to determine my future and continued existence. Please allow me to introduce myself. I am Sgt Linda Cade, in 4th Battalion, 64th Armored Regiment Unit here that Patrols the Helmand Province, Afghanistan. I am desperately in need of assistance and I have summoned up courage to contact you.

I am presently in Afghanistan and I found your contact particulars in an address journal. I am seeking your assistance to evacuate the sum of $26m (Twenty Six Million United States Dollars) to you, as far as I can be assured that it will be safe in your care until I complete my service here. This is no stolen money and there are no dangers involved.

Some money in US DOLLARS was discovered and concealed in barrels at a location in Helman Province when we conducted a foot patrol and it was agreed by all party present that the money be shared amongst us.This might appear as an illegal thing to do but I tell you what? No compensation can make up for the risks we have taken with our lives in this hellhole. The above figure was given to me as my share and to conceal this kind of money became a problem for me, so with the help of a Canadian contact working with the UN here (his office enjoys some immunity) I was able to get the package out to a safe location entirely out of trouble spot. He does not know the real contents of the package as he believes that it belongs to an American who died in an air raid, who before giving up trusted me to hand over the package to his close relative.

I have now found a secured way of getting the package out of Afghanistan for you to pick up. I do not know how long I will remain here, as I have been lucky to survive 2 suicide bomb attacks by Pure Divine intervention. This and other reasons put into consideration have prompted me to reach out for help. If it might be of interest to you then Endeavor to contact me immediately and we would work out the necessary formalities but I pray that you are discreet about this mutually benefiting relationship.

I will give to you 30% of the sum and 70% is for me. I hope I am been fair on this deal, Get back to me with your full information:

I wait for your contact details so we can go on.
Respectfully,
Sgt Linda Cade,
United States Soldier:Afghanistan 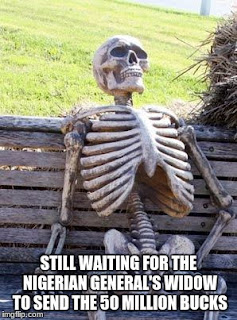 Okay, there we have it. Some of the usual tell tales of the internet scammer can be found. Capitalized letters that don't need it, such as Patrols and Twenty Six Million. Awkward wording- "the decision you make will go off a long way to determine my future and continued existence." The dangling of money, the presumption of "yes, it's kind of illegal, but we've earned it, and I need money getting it out" sort of line. She (and it's not a she, but for the sake of the scammer's story, let's play along for a moment) insists it's not stolen- despite being "discovered" in barrels. Uh huh. Right.

Sgt. Cade goes on with the (totally fake) story of surviving suicide bombs (through Pure Divine intervention, mind you, not pure divine intervention, but Pure Divine Intervention), dangling that money offer out there and asking for discretion... right before asking me to list all sorts of information that if she were real (and she's not) she would already have. 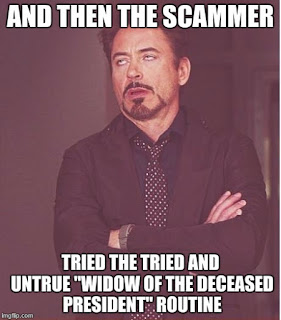 Two things, Sarge- can I call you Sarge? No? Well, I'm going to call you Sarge anyway. So there. First, I looked up the history of the 64th Armor Regiment. Very impressive. They've been everywhere down through the years, and the 4th Battalion? They've been part of it every step of the way. Until a few years ago. You see, Sergeant Scammer... the 4th Battalion of the 64th was deactivated... and reflagged as the 3rd. And the 64th Armor as a whole left the Afghan conflict several years ago. You would know this if you were in the 64th Armor. Which you are not.

Second, a cursory googling of the name Sgt. Linda Cade comes back with scam links with the same message as above- or another similar story by Sgt. Cade saying she's serving in Syria and came across a whole ton of money which she needs to move discreetly. She, he, or it- whoever it is behind a wall of aliases and a daisy chain of email addresses- has been at this for a good long while. It makes you feel sorry for the real Linda Cades of the world who find out they've got a common name with a scammer.

Nice try, Sergeant Scammer. Try someone else on the five million email addresses you sent this one out to.  Maybe there's someone gullible enough to buy your line and start feeding you thousands of dollars before they suddenly wise up.

In an ideal world, we could have real soldiers use you for the subject of an artillery barrage. 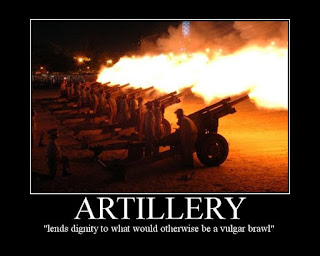