A Day In The Life Of An Idiot Mayor

Now then, on Monday the new mayor of Toronto, John Tory, will be sworn in. Rob Ford, the crack smoking former mayor, remains on council as a councilor, proving that the people in his ward are complete bloody morons. His brother Doug, having lost the mayoral race he stepped into literally at the last minute when Rob was faltering and got that cancer diagnosis, mused about running for the leadership of the provincial Conservative party, a notion that would guarantee them another twenty years out of power. He decided not to (or word came down from on high telling him to go to hell), but mused that in four years he might just have a go at it if the Conservatives lose the next provincial election.

This might be the last time I do these, but maybe not. We'll see. Rob the blowhard has cancer, and I'd be amazed if he survives the winter. Still, am I sympathetic? No. The way this jackass and his thug of a brother used cancer as a political grandstanding tactic during the municipal election was a disgusting slap in the face to anyone who's had family die of the disease- having had lost a mother, brother, and nephew to cancer certainly had that effect on me. It wiped out any bit of compassion I could have for the man, and made me despise him and his family even more. He deserves nothing but contempt and scorn. For that and so many other things, you insufferable prick.... your last days should be spent in agony. And when you do shuffle off that mortal coil, I'll forego the usual not speaking ill of the dead thing. I'll be saying good riddance and give my regards to hell. You and your cult of followers more than have it coming, you repugnant waste of oxygen.

That said... here we have one more day in the life of an inept mayor, in the form of his last day as mayor. The end of his mayorship. Four long years of buffoonery are at an end. It feels like four centuries. 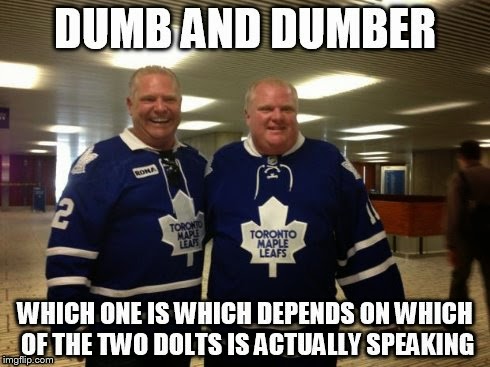 10:55 AM. Wakin’ up at home. Poundin’ headache. Chest feels like a vice is on it. What the ****, who cares? I’m sure it’s nothin’ to be worried about. It’ll all go away with a half bottle of vodka anyway. Or maybe a full bottle. 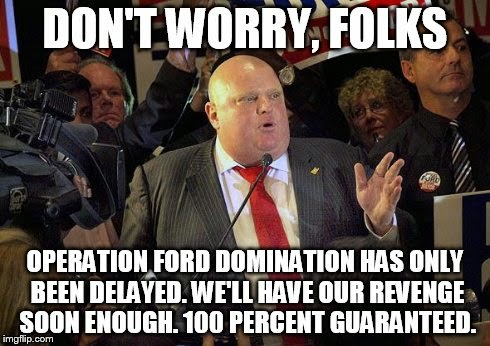 11:12 AM. Gettin’ loaded. Nothin’ like the hair of the dog that bit you to get over a hangover. Who gives a **** what those doctors say about mixin’ booze and chemotherapy anyway? 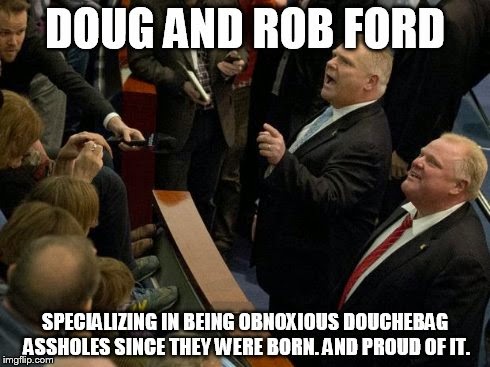 11:24 AM. Dougie shows up at the house. Hey, brother, wanna drink? We got a lot to do, man. Me makin’ the next four years of city council a livin’ hell for every single ****er who doesn’t like us. You, bidin' your time for another four years til it's time to take over those provincial Tories. Hell, that ****in’ Liberal premier oughtta just resign now and insist you be appointed premier for life, because nobody beats a Ford! 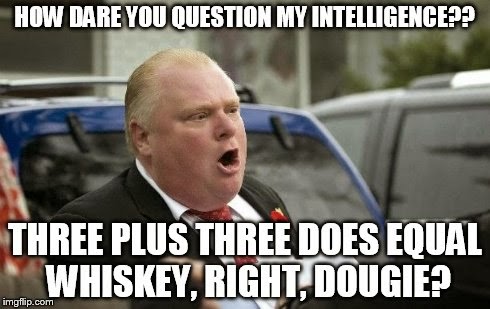 11:26 AM. Dougie and me talk over vodka and crack. Yeah, I know I got that city council thing today. That stupid mother****er who won the election gets to be ****in’ mayor now. But I still got some ****in’ time before that, and I’ll tell you right now, there are a few things I gotta ****in’ say. Where’s that piece of **** nephew of ours? I need someone to harass and torment, and that ****er would do nicely. 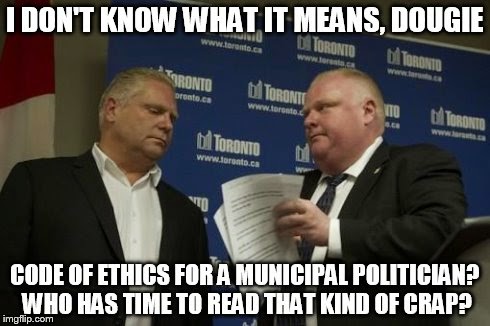 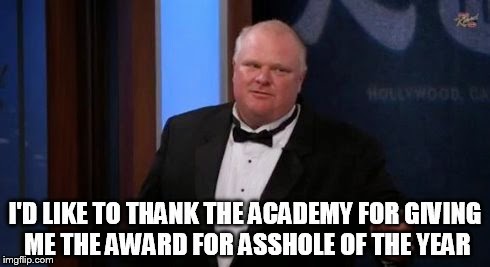 11:41 AM. I start ramblin’ to those ****in’ reporters. I say that the chemo’s goin’ well, and I thank Ford Nation for their undyin’ support. Feels great to know there are people out there so ****in’ dumb that they stand with me all the way. Wait, did I say that out loud? Anyway, it’s a big day. New mayor comin’ in, but ol’ Robbie’s still here. And for the next four years I’m goin’ all out to turn city council into scorched earth, man! Yeah! You think I was obnoxious before? ****, no! I’m gonna be even more of a pain in the ass to every ****in’ downtown elite latte swilling granola eatin’ liberal commie fascist anarchist! Ford More ****in’ Years, man! We’re gonna make their lives a livin’ hell, because they’ve all got it comin’. Nobody ****s with Robbie Ford and gets away with it! 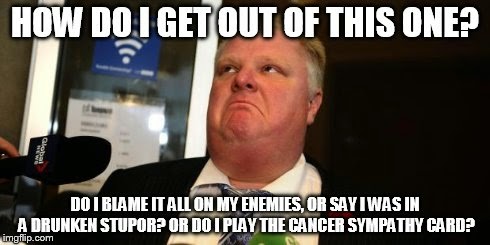 11:59 AM. ....and another thing! Takin’ away my mayoral powers like the council did was like Hitler invadin’ Poland! It was worse! And I’m gonna get my ****in’ revenge on every single one of those mother****ers! I’m spendin’ the next four years doin’ everything I can to blow up the mayor’s mandate and making such a ****in’ mess that Ford Nation will lead the charge to have me made Mayor For Life! And that’s just where we’re gettin’ started, man! We got big plans! 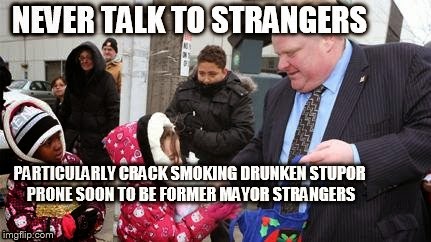 12:12 PM. .... yeah, we’re gonna have Operation Ford Domination in place in four years, and then we’re gonna be runnin’ the entire ****in’ country, me and Dougie, we’re gonna do big things and we’re gonna put everyone who ever laughed at us or rolled their eyes or failed to ****in’ applaud us into a livin’ hell. We’re talkin’ secret ****in’ police and Ford Nation snitches, and our gangbanger buddies in cushy enforcer jobs, and Ford Fests, and vodka and crack every night, and forced labour for ****in’ liberals to build gigantic statues of the Fords! 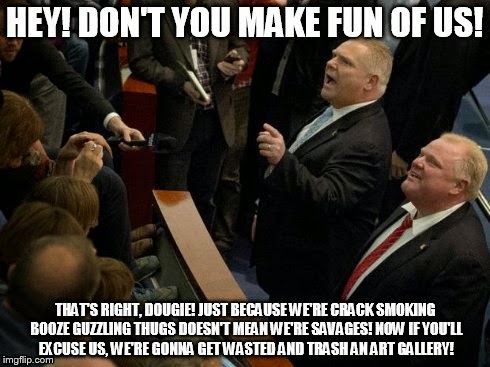 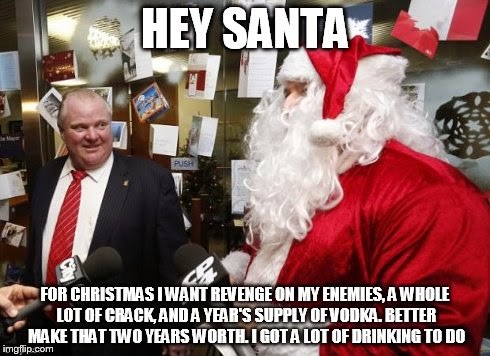 1:05 PM. Down at the doctor’s office. Stupid **** er tells me I have to stop drinkin’ and doin’ drugs. Says it’s not good for the chemo, let alone my general condition. Says I could also have a massive heart attack or stroke at any minute. Hey! **** you! I know what’s best for me, and booze and drugs make me happy. Add in a couple of hookers and I’m even happier! Now don’t you forget! You’ve got that... whatchamacallit? That hypochondriac oath that says you can’t say anything to anyone about my condition. So I don’t want anyone to know rehab was just a big ****in’ joke and I’m still boozin’ and druggin’ it up. **** you! 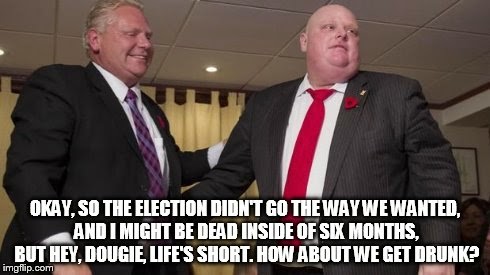 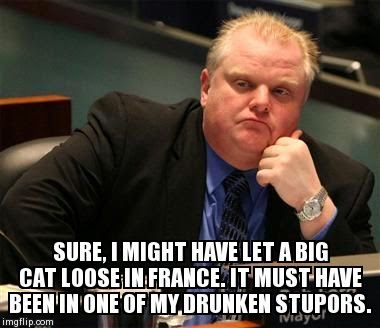 2:17 PM. On my way into council chambers. Stopped by ****in’ the press who start askin’ me questions about what I said earlier today. Wait a minute, what? I spoke to you stupid mother****ers today? When the **** was this? 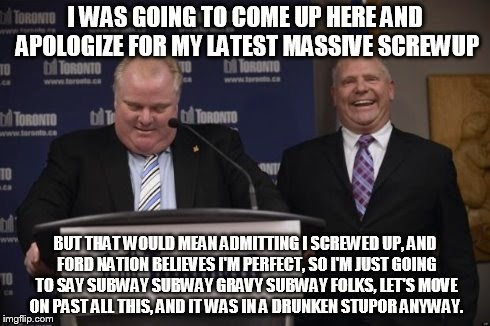 2:21 PM.  I roll my eyes and snort and sigh. Look, if you stupid ****ers were takin’ me seriously, you’ve got blinders on to the world, man. I wasn’t ****in’ serious when I said all that stuff about scorched earth and liberal witch hunts and rainin’ fire down on my enemies. What’s important now is that’s all in the past, and we gotta move forward with makin’ sure the new mayor’s gonna be in a livin’ hell for the next four years, because in 2018, either me or another Ford is gonna be the mayor and we’re gonna get things done with the gravy subway and the gangbanger cushy job initiative and the world domination project. Now if you don’t mind, I gotta get in there so I can make a ****in’ spectacle of myself. Go **** yourselves, you stupid ****ers. 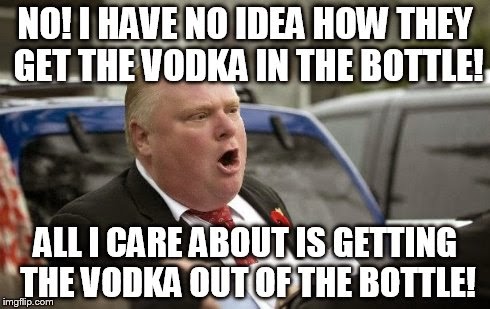 2:30 PM. Mayor Tory comes in to get the whole ****in’ swearin’ in thing done. Stupid ****er, yeah, I’m gonna be your worst ****in’ nightmare for the next four years, because the Fords are a political ****in’ dynasty of heroism and crack and vodka and hookers. We’re the ****in’ Kennedys, and nothin’ and nobody’s gonna keep us from gettin’ what’s ours! 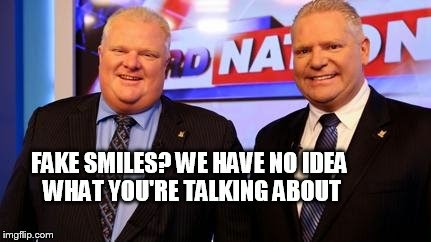 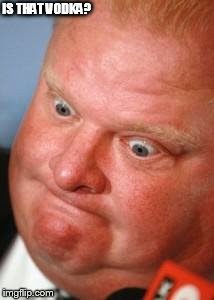 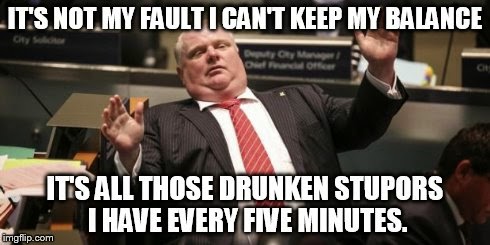 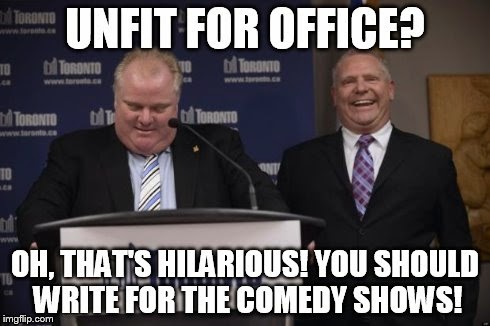 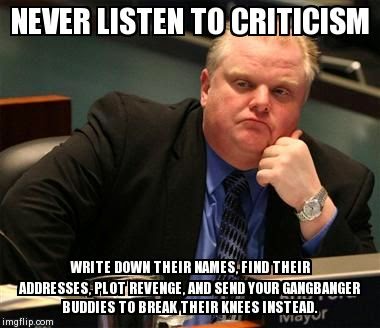 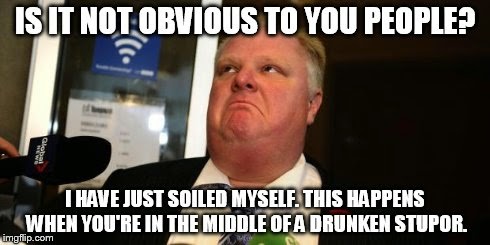 4:08 PM. My stupid ****in’ lawyer is in my office tellin’ me I gotta shut up and stop actin’ like a kid throwin’ a tantrum. Hey! **** you! Do I look like a kid? For some reason he doesn’t seem terribly impressed with me right now. I don’t know what the **** his problem is anyway. Maybe he needs a drink and a bong pipe of crack. Hell, I could use one of both too. It’ll take the ****in’ edge off. 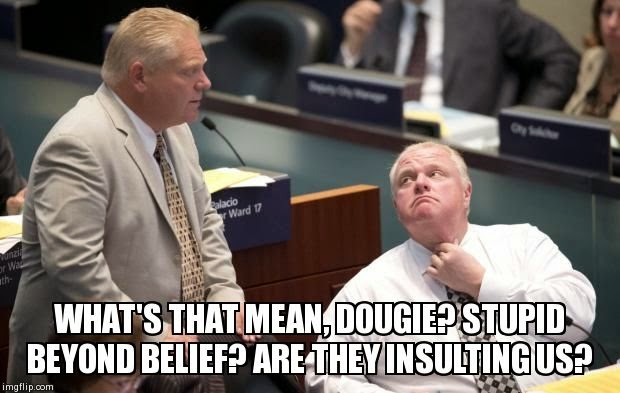 6:47 PM. Makin’ a brief statement to the press. Dougie and our useless nephew Mikey are right behind me. Look, I get carried away, folks. Not a good day for me, but I mean well, and hey... I got cancer, so that gives me a free pass to yell at people. Walkin’ away after a passerby calls out that havin’ cancer doesn’t mean I’m not a complete scumbag. Dougie? Find out who that is. We’re gonna have his legs broken. 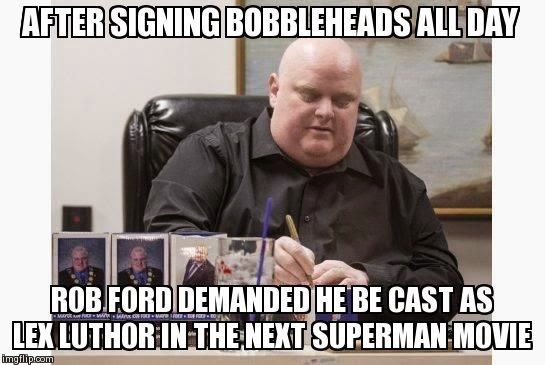 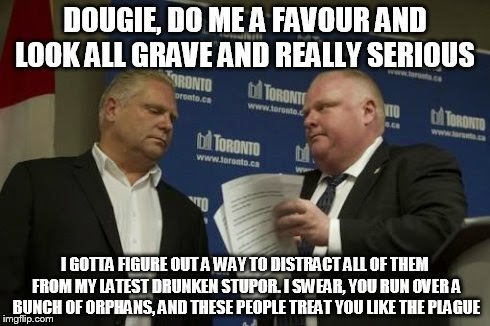 11:03 PM. Watchin’ the ****in’ news. Turns out I mighta said some of those things those ****ers said. Hell, that was so long ago I can’t remember anyway. Who gives a ****? Certainly not Ford Nation, who’ll do everything I say. Yeah. We’ll be back. Ford Nation will rise again. And we’ll get our ****in’ revenge on every last one of those ****ers. And have our vodka and crack while we’re doin’ it. 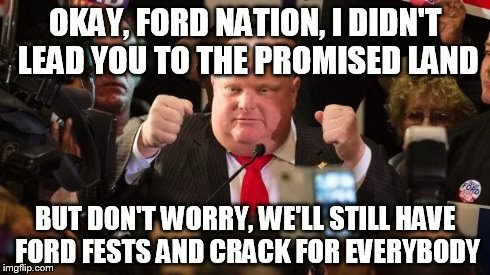