Some links before getting started today. Parsnip had a series of pics at her blog the other day, and yesterday having had been a Friday, her usual Square Dog Friday post. Shelly had a post the other day from the dog's point of view on such matters like Ebola. Krisztina had a recipe and pics from Woodward Gardens. 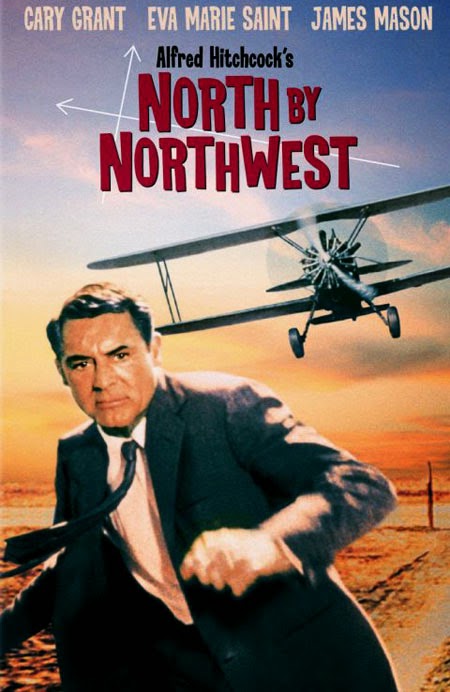 “Has anyone ever told you that you overplay your various roles rather severely, Mr. Kaplan?” ~ Phillip Van Damm

“War is hell, Mr. Thornhill, even when it’s a cold one.” ~ The Professor

“How do I know you aren’t a murderer?” ~ Eve Kendall

“Now you listen to me. I’m an advertising man, not a red herring. I’ve got a job, a secretary, a mother, two ex-wives, and several bartenders that depend upon me, and I don’t intend to disappoint them by getting myself slightly killed.” ~ Roger Thornhill 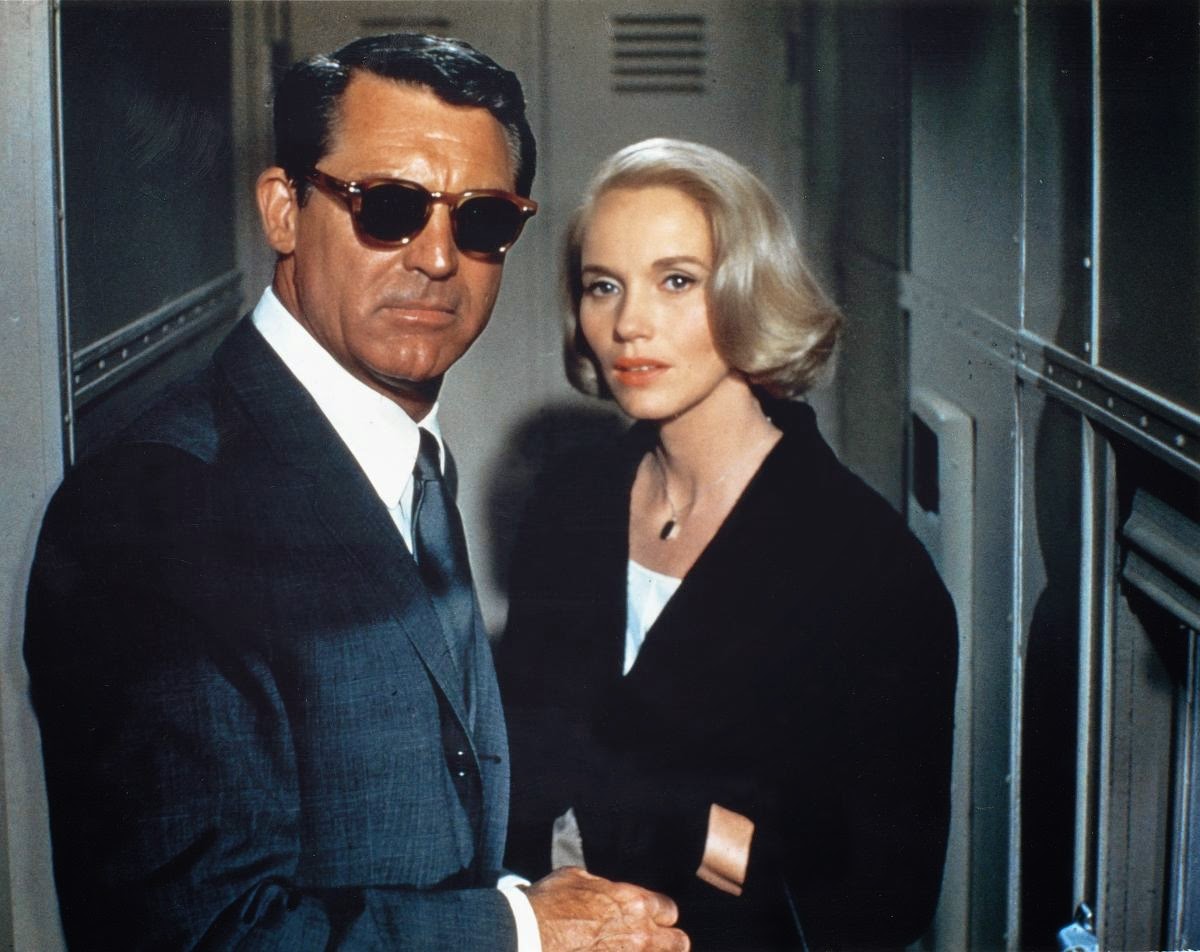 The great director of suspense Alfred Hitchcock had a long career filled with classic films that drove up the tension, some of which are among the greatest films ever made. Psycho would make the audience never quite look at a shower the same way again. Rear Window had a voyeuristic streak in its story of a man stuck at home recovering from an injury and having nothing better to do than watch his neighbours. Vertigo deals with the theme of obsession. The Birds features nature wrecking havoc on man. For those of us who love the work of the master of suspense, there’s usually one film that stands out as a personal favourite. For me, it’s North By Northwest, his 1959 classic spy caper bringing in the man in the wrong place notion that was favoured by Hitchcock. 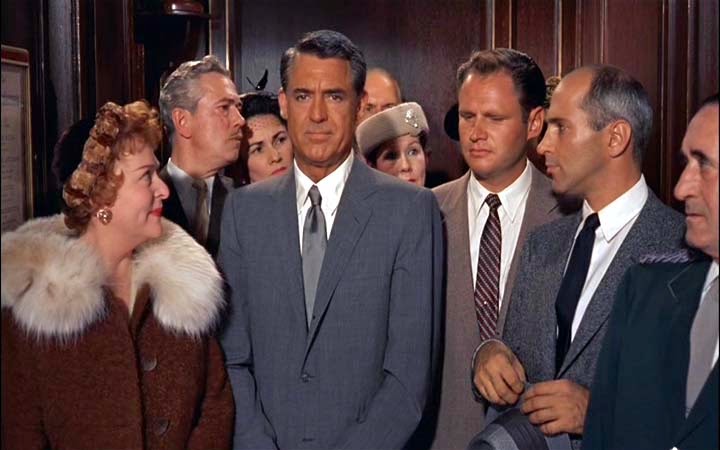 We first meet Roger Thornhill (Cary Grant), an ad executive in New York City coming to have drinks with friends. By chance he is mistaken by two hoodlums for an elusive George Kaplan, and the two spirit him off to a waiting car. Despite his protests that he’s not Mr. Kaplan, they remain silent, taking him to an estate on Long Island, where he meets a man by the name of Lester Townsend (James Mason). We will later learn that the man’s actually one Phillip Van Damm, and he interrogates Roger, who finds himself increasingly confused by the situation he’s in. Not getting the answers he wants, Van Damm leaves Roger to his associates, including Leonard (Martin Landau), who proceed to get him drunk, with the intention of setting up a fatal car crash. 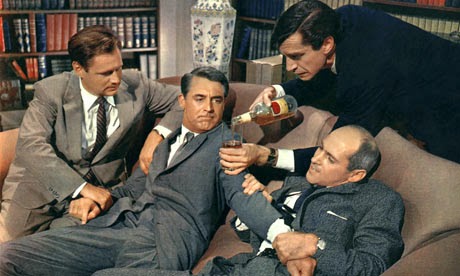 Roger manages to survive and escape, but the police, the courts, and his mother (Jessie Royce Landis) refuse to believe his account of what happen. He soon finds himself on the run, framed for murder, hunted by the police and Van Damm’s men, beginning a cross country effort to elude them all. And along the way he meets the enigmatic Eve Kendall (Eva Marie Saint), who recognizes him as a wanted man and yet has no issue at all dining with him, flirting with him, and assisting him in hiding from the police. Her motives are her own, as are the motives of a group at the CIA, headed by The Professor (Leo G. Carroll), all of whom know that Roger is indeed innocent- because there is in fact no George Kaplan. 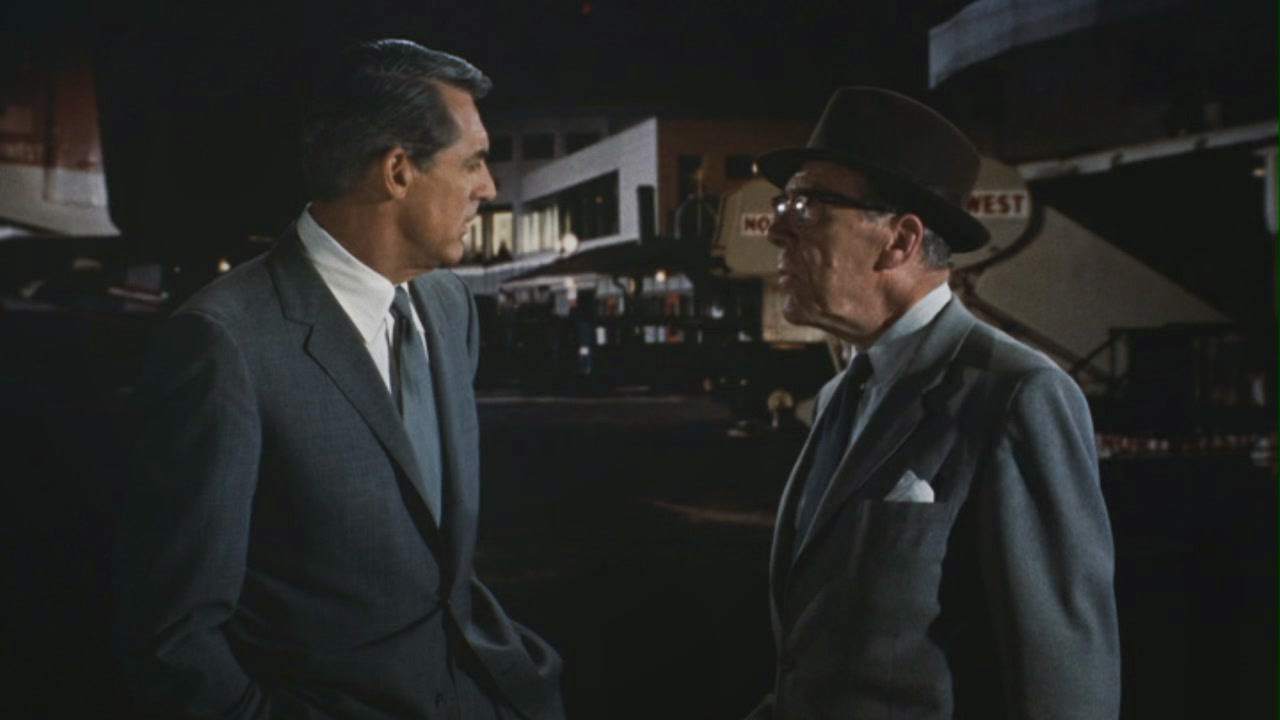 The story is by Ernest Lehman, who worked with Hitchcock on a film that never made it past pre-production and wanted to write a Hitchcock film to top them all. The question of who came up with what idea is a bit murky- the director and writer discussed story ideas and plotlines, but the end result is a fast paced caper film that serves as a harbinger for the James Bond films. It deals with Cold War intrigue, treachery, double dealing, hidden agendas, and the notion of what Hitchcock called the MacGuffin, an object sought by all characters in a film that’s only important because the characters want it. In this case, the MacGuffin is microfilm with state secrets. The story tone is lighter than much of the director’s usual work, with a romantic streak between the characters, a great sense of humour, and the pacing of a mad dash across the countryside with no way to know where danger lurks. While it takes the man in the wrong place concept and runs with it, the story also shows us a protagonist who starts to adapt to the situation he’s in, a man capable of thinking and improvising his way through trouble. 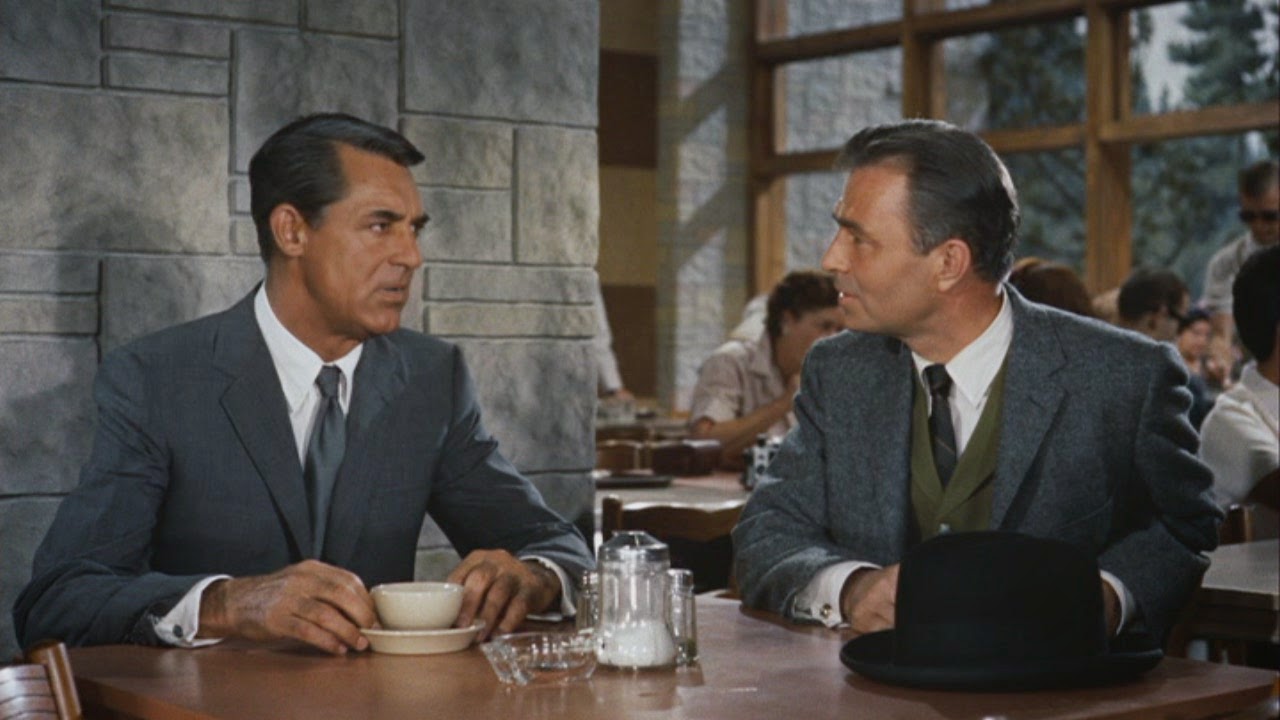 Some of the filming was done on sets, such as the Frank Lloyd Wright inspired home of Van Damm seen towards the end of the movie, or the climactic sequence on the face of Mount Rushmore. Other filmwork was done on location; portions of the film were done in the Rushmore visitor center, for instance, where if you look carefully you can see a boy in the background cover his ears just before a very loud noise. The iconic cropduster sequence, in which Roger is placed in peril in the middle of nowhere by a pilot, was actually filmed in California, though it feels quite Mid-Western in the location. It’s one of the great sequences of the movie, a masterpiece of sheer tension as you wonder how on earth does he get out of this? 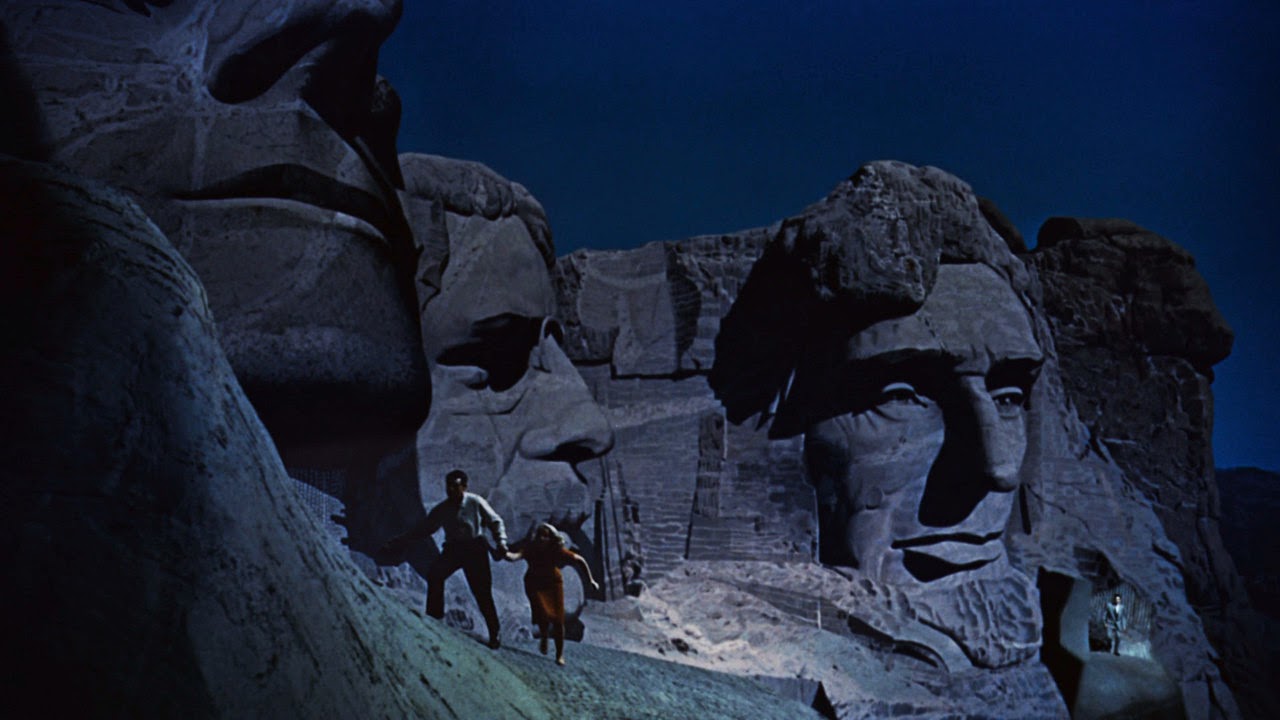 The score is by Bernard Herrmann, who collaborated frequently with Hitchcock. It’s my favourite of the composer’s work, with romantic and charming melodies for the leading man and the woman crossing his path, sinister undertones for the villains, and rousing music to underscore the action and the tension. It suits the spy thriller aspect of the film very well indeed, and the entire Mount Rushmore sequence features Herrmann at his best, driving up the suspense and terror of the moment exquisitely. 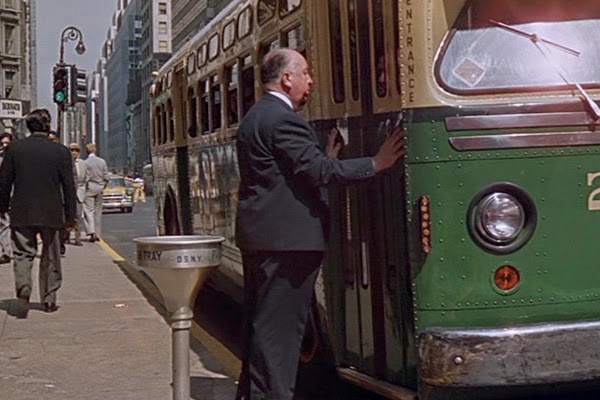 The casting of the whole film is spot on. Hitchcock of course does his customary cameo early on, turning up in the opening titles and missing his bus as it drives away- a hint of the sense of devious humour yet to come. His choice of Jessie Royce Landis for Roger’s mother is a good one; they had worked together some years before on To Catch A Thief, where she played the mother of Grace Kelly’s character. Her take on the role of Clara Thornhill is one of exasperated amusement at her son, and we’re left to wonder which of the pair is more of an adult. Some of the humour comes from her, such as asking two of the henchmen in a crowded elevator, “you gentlemen aren’t really trying to kill my son, are you?” 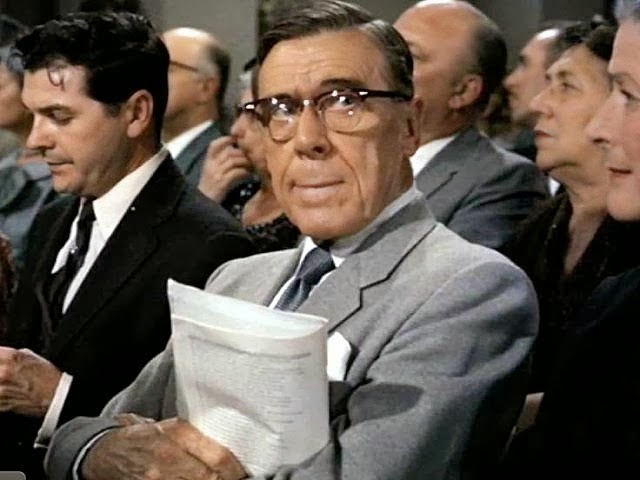 Leo G. Carroll also appeared regularly in Hitchcock films, appearing in six of them, including Rebecca, Suspicion, and Strangers On A Train. This was his last work for Hitchcock, but his best too. He plays The Professor in a number of ways. At first he’s pragmatic, seeming not to mind that an innocent man might be living on short time if it means the protection of an agent in the field, but that’s understandable coming from a spymaster. He seems too bookish in his looks to be a spy, but there’s a devious streak to the character that very much suits the profession, and ultimately he’s much more of an ally than he starts out as. He gives the character a calm, steady hand in his performance, and we see him as a man who’s dedicated his life to service to his country.

This was an early role for Martin Landau, but a good one. Leonard is seemingly polite, but there’s a lot of menace and malice lurking under that, as we quickly see. He’s suspicious of everyone, totally loyal to his boss- to the point of jealousy, even, and one can interpret that devotion in more than one way. Fundamentally though, the character’s a dangerous man, with a ruthless streak. 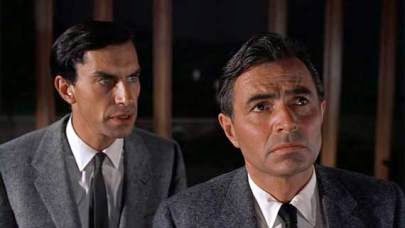 James Mason is wonderful as Van Damm. His character is a traitor, selling spies to the other side in the Cold War. As sinister as he is, there’s a civilized, charming side to him. He doesn’t particularly care to do the dirty work of being a villain, and leaves all that to his various henchmen. He moves through the film with a sophisticated smoothness, a prelude to many a James Bond villain yet to come, and gets what I consider to be the greatest final line of a villain in movie history. Like the rest of his dialogue, it perfectly fits the character, and has the added benefit of being brilliantly funny. 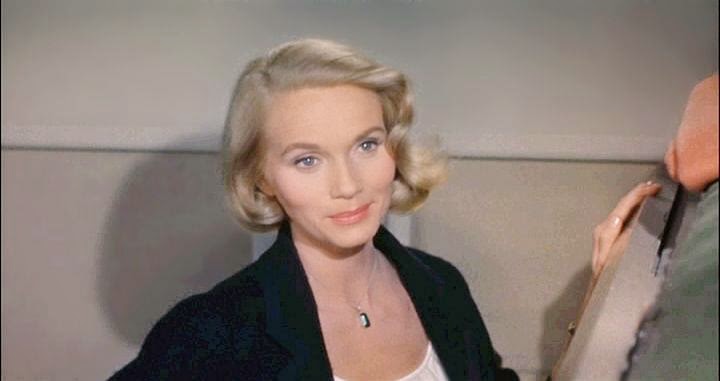 Eva Marie Saint has to play Eve in a number of ways. We doubt her motives, as we must, not sure of what she’s playing at. But there’s no doubt that she suits the character so well. There’s a boldness in her, a seductive energy that works well on Roger. Things change through the film, and she plays those changes in just the right way as they come. And she’s got great chemistry with Grant, which comes across in their every scene. It’s a very adult role- there’s little doubt what happens between the pair on an overnight train trip- and quite risqué for the time, but her Eve is an irresistible charmer and glamorous heroine with a heart. 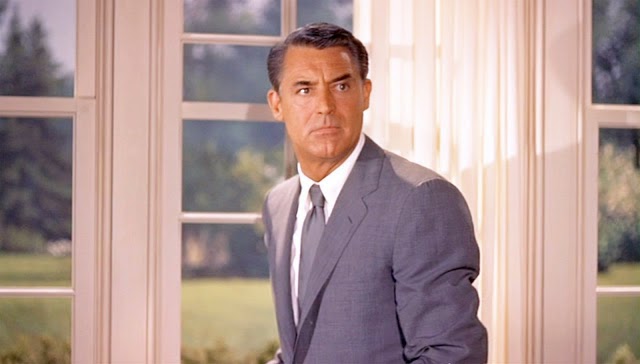 Cary Grant worked with Hitchcock on several occasions, and here he is the charming leading man, placed out of his element. Roger is an elegant and refined man who doesn’t mind wisecracking. He’s somewhat self-deprecating, thrown by chance into a world of secret agents that he doesn’t understand, and yet he comes into his own. He proves to be resourceful in getting out of trouble time and time again, and manages to keep his calm, even noting at one point while in great peril that his ex-wives divorced him because they thought he lived too dull a life. It’s a marvellous role for Grant to have chosen for his last collaboration with Hitchcock, and he certainly makes the best of it. His Roger Thornhill is one of my favourite Grant roles.

The master of suspense really outdid himself with this film. Some might argue the point, but personally, I think North By Northwest is Alfred Hitchcock at his best. It brings humour into the midst of unbearable tension, taut suspense, and the world of secret agents and treachery, all while following  the path of an innocent man desperately out of his element. It’s an entertaining film, stylish, and fresh even now, and a marvellous caper. 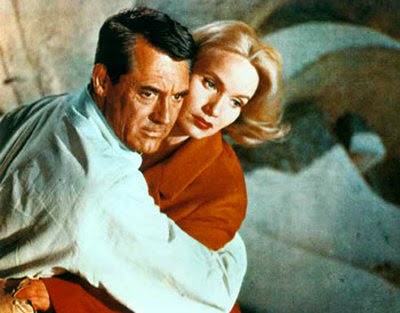