Waldo Versus The Explosion Prone Director

Some links before I get started today. Yesterday was a Sunday, so we had a Snippet Sunday post. Lynn had neighbour issues. Shelly had writing updates. Hilary had Lucy front and center at her blog. And the Whisk had her dogs looking good.

Today then we revisit a familiar face, in the form of an explosions loving director. 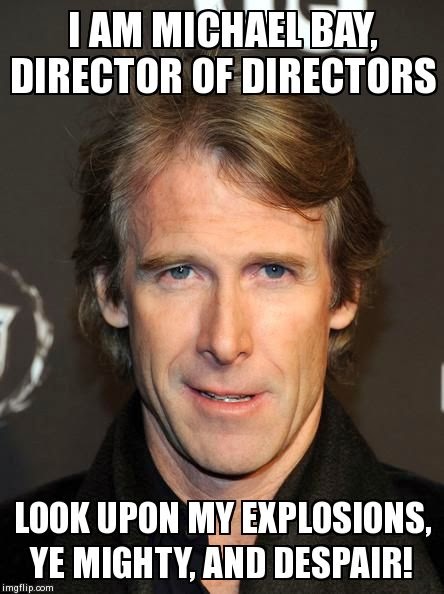 Los Angeles (AP) Reporters were summoned to the offices of Digital Domain this week, where director Michael Bay was to hold a press conference. This reporter was unfortunately among them, despite his deep dislike of Hollywood. It turns out that just because a certain editor doesn’t care for reporters falling asleep during the funeral of his father-in-law, that reporter gets punished over and over and over again, and why on earth do I keep getting invited to funerals for people I don’t even know and could care less about... (do you really want to keep your job? Stop going off on an irrelevant tirade, and by the way, I’m still annoyed with you for talking in your sleep while I was eulogizing Big Jim. ~ editor)

Anyway, I digress (and what kind of name is Big Jim anyway?). We gathered together at the offices of Digital Domain. Some were actual reporters. Others were those vacant headed twits who work for the entertainment shows. This reporter didn’t want to be there, but was stuck. One of the aides announced her boss. Bay came out on stage, dressed in his usual fashion, jeans and a denim shirt under a blazer, with a day or two worth of stubble on his face. Bay was also sporting a fading black eye- that was an interesting touch; this reporter wondered who had done the world a favour and hit Bay. He waved to the reporters, stepped up to the podium, and looked at his reflection in a mirror placed there for his convenience. Satisfied with himself, he began to speak. 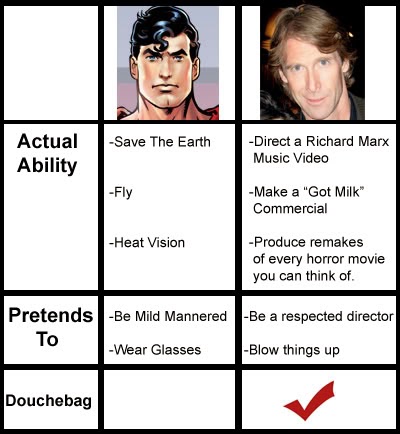 “Hello! Welcome and salutations! It is my pleasure to see you all here today,” the director of high octane explosion movies like Armageddon and Pearl Harbor called out. He smiled again in that vacant, dull witted manner of his. “But of course you had to come. After all, everyone is fascinated by everything I do as a director, and it is your solemn responsibility as reporters to spread the good news. Now then, I have decided that among the many projects I am undertaking as a director that it is about time that I do a children’s film. Something that kids will like and adults will get into. And so I thought about it. Maybe I could have done Watership Down with CGI rabbits and lots of explosions. Perhaps it was time to do a new version of Little House On The Prairie with lots of explosions and a runaway train. Instead I decided to go in a different direction. I decided to adapt the books Where’s Waldo?” 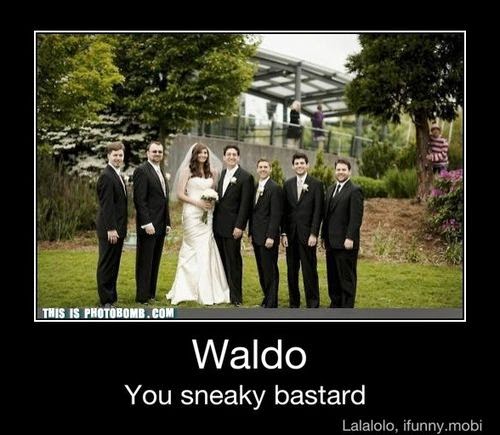 Reporters gasped in stunned shock. The books, a series of picture books featuring a seemingly well mannered fellow in a red and white striped shirt and hat hiding among crowds of people, have been beloved by many children since illustrator Martin Handford began drawing them in the Eighties. What on earth could a hack of a director like Bay do to damage their reputation beyond repair?

“You have got to be joking!” a Reuters correspondent declared.

“Why do people always say that about me?” Bay asked, looking confused.

“Isn’t there already a movie in development?” another reporter asked. 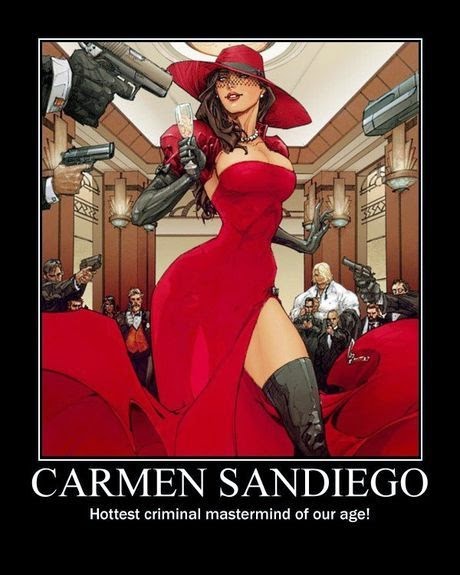 “Like I care about that,” Bay said with a shrug. “Look, it’s all very simple. Me being me, I wanted to find out what it is that makes Waldo hang out in crowds. So the story I’m going to tell is of him being on the run from an evil conspiracy with his arch-nemesis Odlaw hunting him. There’s going to be a love story, by the way, because I’ve also secured the rights to Carmen Sandiego, and we can’t do without that. It’s going to be epic. Carmen Sandiego waxing a car dressed in that trenchcoat and hat and just a bikini, because you’ve got to have a babe waxing a car in my movies. Waldo on the run from the mad bomber Odlaw. The eccentric Wizard Whitebeard who likes to listen to classic rock when he’s not grooming his beard. And explosions. Did I mention explosions? Because it’s going to be epic and huge and everything you can possibly imagine rolled up into one big blockbuster film with explosions. I’ve got Aerosmith already working on the theme song.”

Reporters collectively sighed with dismay. This reporter wondered how long he would be in assignment purgatory, all for (don’t you even think of starting to complain! ~ editor). This reporter spoke up. “Are you insane?” 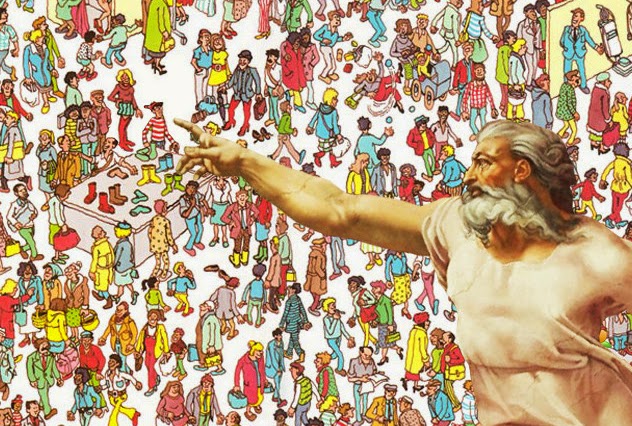 Bay laughed. “Oh, that’s funny! Why don’t we start bringing out the cast. My star might have been in a bit of legal trouble lately... but seriously, is running Andy Dick over a crime? Who here hasn’t thought of driving their car over Andy Dick’s body? Ladies and gentlemen, playing our hero, Mr. Shia LaBeouf!”

LaBeouf came out on stage, waving. “Hello! Shia is happy to see you!” he proclaimed. This reporter sighed. The talentless little cretin was still in his talking in the third person phase. “Shia is completely innocent, by the way, and will beat the rap, because the Very Important Persons Act says that Shia cannot be held accountable for Shia’s actions!"

Bay nodded. “Shia’s going to look great in a white and red turtleneck, hat, and glasses. And where Waldo goes, Carmen Sandiego must go with him. Playing our hot heroine, I give you Megan Fox!”

Megan Fox, the frequent co-star in Bay films, stepped out on the stage in a way that emphasized her cleavage. “You know, kids have loved Carmen Sandiego for as long as I can remember. She’s an elusive bad girl with a heart of gold, and you just know that when she and Waldo get together, sparks are going to fly!” She took her place beside LaBeouf, who nodded in that vacant, not much going on between the ears way of his.

Bay spoke again. “I thought long and hard about Wizard Whitebeard. I thought of getting Ian McKellan to play him, given that he’s played a white bearded wizard before, so how hard could it be? He told me, and I quote, that he’d rather walk bare foot through ten miles of fire ant nests, unquote. I don’t know what that means. Could someone explain? Anyway, that’s beside the point. I decided for a bit more creative casting. I was actually thinking of casting my go-to guy as the villain Odlaw, but I figure he could do well as the wizard. Ladies and gentlemen, I give you Mr. Nicolas Cage!”

Cage came out on stage. Reporters gasped again. He waved and smiled in a way that suggested he’d been drinking. “Hi there! Don’t mind me, I’ve just been drinking from a bottle of Ampoules wine. Did you know that stuff is pretty expensive? But nothing’s too good for Nicky Cage, and this time, I swear, I’m not going to blow through all my money, even if I’m spending six figures on a single bottle. Wait, don’t tell the IRS that.” 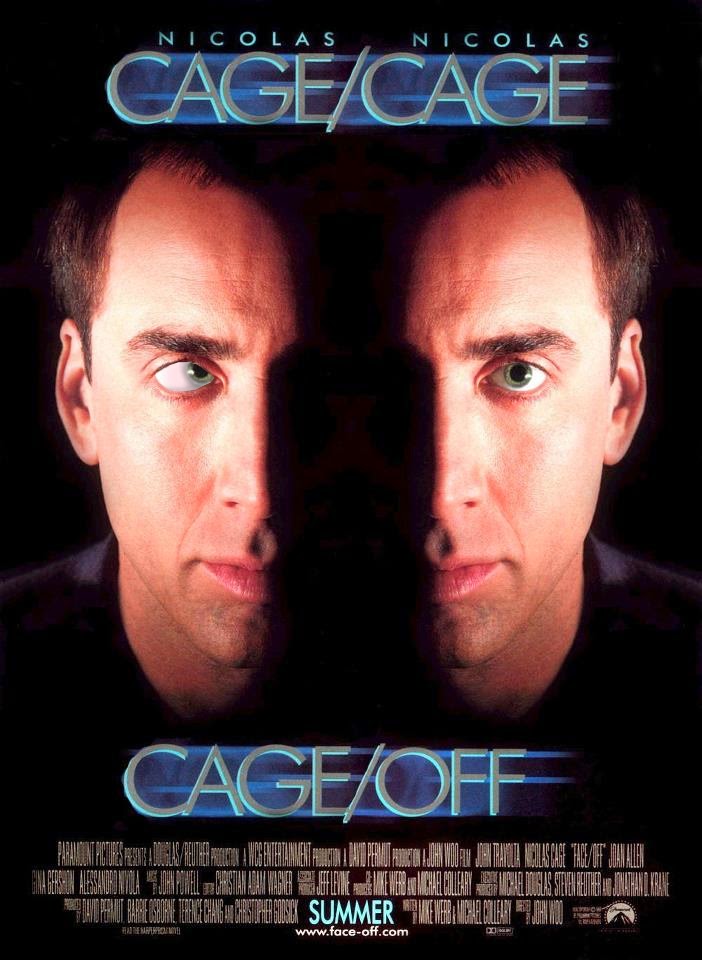 Cage took his place with his fellow actors. Bay carried on with his announcement. “Rounding out the main cast, I must give you our Odlaw. It is said that his bad deeds are many, so I had to go with an actor who I thought would be ideal for the role. I could have gone with actors I’ve worked with before. I could have gone for age differences. I could have gone with Robert Downey Jr., but he told me to go to hell. I asked Mel Gibson, but he said he’s not that desperate yet as to work with me. I don’t know what that means, could someone explain that to me?” He smiled again, as if expecting an answer. “Anyway, after much consideration I decided that the ideal Odlaw for my movie would be best cast with....ladies and gentlemen, without further ado...” This reporter sighed at the endless stalling and building up the hype. “The person who will be playing Odlaw in my movie.... is Reese Witherspoon!”

Reese Witherspoon stepped out on stage, looking puzzled. This reporter was under the impression that Odlaw was a guy. What on earth was this about? She heard the confused remarks, sensed the dismay among the crowd, and shrugged. “Look, it’s been awhile since I’ve actually had a good role, and I was getting a bit desperate for anything, so I agreed to do this. I don’t like it, I don’t like this Bay guy, and I’m just hoping he doesn’t insist I wax a car in a bikini.” 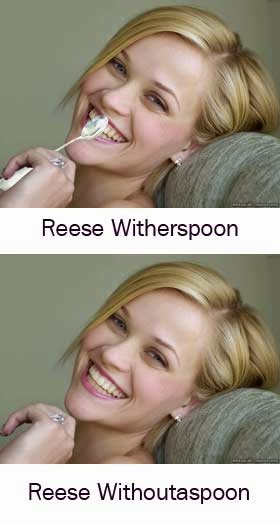 Bay laughed. “Oh, that’s hilarious, Reese! We’re going to need some of that humour for your role, by the way, because she’s going to be the maddest mad bomber since Tommy Lee Jones in Blown Away. Speaking of which, I ran into him the other day, and started talking about working with him in a movie down the line, and well, one thing led to another and he knocked me out. Who’d have thought Tommy Lee Jones could be that temperamental? Or that he’d hit that hard?” Bay shrugged. “Anyway, it’s all in the past, which doesn’t matter, because who cares about the past? It’s the future that’s important, and that’s why Where’s Waldo? Waldo Versus The World is going to be a big, huge film down the line...”

“You’re actually naming it Where’s Waldo? Waldo Versus The World?” this reporter demanded. “Are you stupid?” 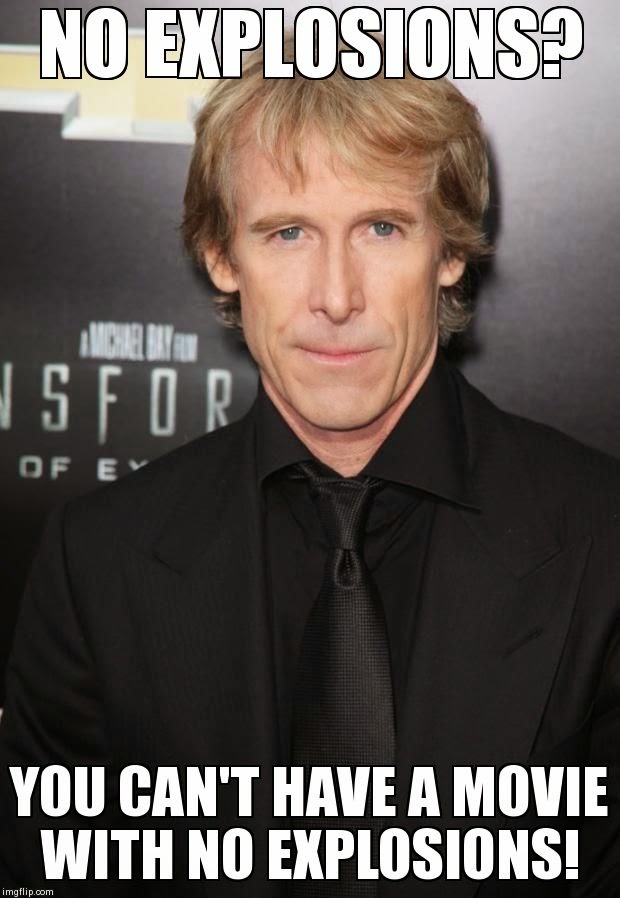 Bay shrugged. “Have you got a better idea what to subtitle it? What’s important is that this film will be huge. Epic scale, and it’s going to be a box office champion, and it’s going to make Oscar voters cry, and we’re going to win everything ten times infinity plus one. And I’m expecting the audience to wear white and red striped shirts and hats to every showing. Pants are optional, but for some reason theatre owners demand you show up in pants. That’s all for now! Thanks for coming out!” Bay waved to the crowd, leaving with his cast.

The real reporters sighed in collective dismay. The entertainment reporters looked confused. This reporter found himself wishing Michael Bay would lose himself in a Where’s Waldo picture in a crowd. And that the crowd would start a stampede, knocking him down and trampling him. It would be a fitting fate for a hack of a director, and would spare the world from yet more Michael Bay stupidity. But then again, we don’t live in a fair world, do we? We live in a world where cranky editors with dead fathers-in-law who actually call themselves Big Jim call the shots, and.... (I hate you with every fibre of my being. Your tires are being slashed as I write this ~ editor).

Wonderful. And he wonders why I don’t like him.