Stopping The End Of The World, Canadian Style

With that Independence Day sequel turning up in theatres soon, I got to thinking of how, in all these end of the world disaster films, with perhaps the exception of The Day After Tomorrow, there's never really a mention of what might be going on in Canada. This is my response, set a couple of centuries and a half down the line. 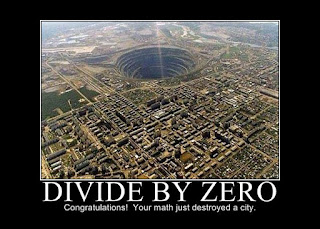 February 5th, 2267 (CP). The world is struggling to put itself back together after an invasion of alien beings across the globe destroyed cities and landmarks, laid waste to entire nations, and wiped out millions of lives. In what has been designated the biggest cataclysm to ever come across the planet since the Trump Temper Tantrum of November 9th, 2016, scores of cities were destroyed by the space faring Tawrae race of reptilian extra terrestrials, bent on destruction just for the sake of destruction.

“My great-great-great-great grandfather Giorgio told you people it was aliens,” Dimitri Tsoukalos told reporters after the great cataclysm had been turned back. Referring to an early twenty first century ancestor who appeared on programs on ancient aliens and who had strange hair, the young Tsoukalos was busy trying to figure out where his Athens area home had gone to after the Tawrae had wrecked havoc in Greece. 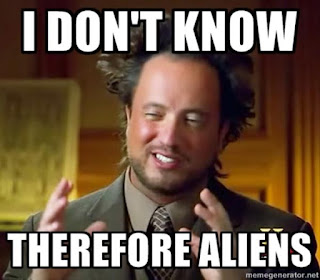 The British Royal Family, who took refuge in Scotland at Balmoral while London was being demolished, are reportedly all accounted for. Queen Kylie III has issued a statement, declaring that “the people of Great Britain will carry on, will always rise up, and will never miss afternoon tea again. Now where are my corgis? I didn’t leave them at the Palace, did I?”

The French military, which in the last century had risen up to new heights of might (a curious thing, given their historical track record until ninety years ago of regular surrenders and half hearted fights in warfare), were decimated during the alien invasion. The Tawrae made a special point of demolishing Paris and the city of New Marseilles, leaving the Eiffel Tower upside down and piercing through the Louvre. “We have lost so much of our precious art,” Louvre director Gustav LeFou told reporters, weeping. “Even the Mona Lisa, our precious lady, she is shredded beyond repair. I know, millions of lives lost should matter more, but I can’t muster myself to feel that way right now. I just feel like getting myself good and drunk, but even my favourite restaurant got wiped out of existence.” 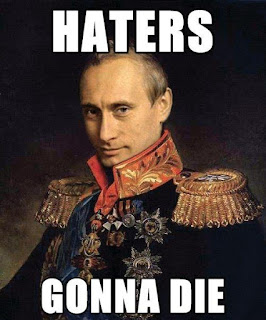 In Russia, Tsar Vladimir the 19th, clone of the first Tsar of the modern era dynasty, Vladimir Putin, was killed after the Tawrae attacked Moscow, destroying the full reserve of Putin clones. “Our beloved tyrant is gone,” Russian prime minister Tatiana Orlov told reporters, weeping before the wreckage of what had once the Kremlin. “All we have known for two and a half centuries has been the benevolent iron fist of the Putins. How can we carry on without him? Well, I don’t know about you, but I think vodka is in order right about now. Unfortunately we lost all the vodka in stock too, and it may take weeks to replenish the supplies."

The attacks ranged across the world, decimating large countries and small. China saw the destruction of the Forbidden City and the Great Wall (not to mention millions of lives). Cape Town in South Africa was smashed and shattered. Australia saw massive carnage in its major cities, and officials there fear there might be serious consequences. With gangs of marauding anarchic bikers already taking to the roads, the nation is developing what some are calling Mad Max syndrome. Speaking on condition of anonymity, an aide to the Prime Minister admitted, “We can’t even blame this one on the dingos.” 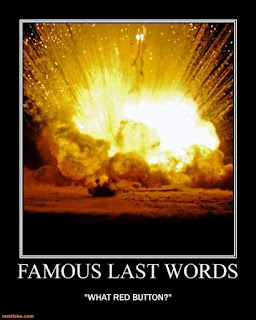 In America, still holding onto military power centuries after its founding, former president Josiah Bush shook his head while at the family ranch in Texas. “You know, I knew them there alien critters musta been comin’, and if I’d been re-elected, we wouldn’t have seen San Francisco and Los Diego slide into the sea. We wouldn’t have seen all that destruction wipe out New York City 2.0, just like they always showed in the old time movies. I mean, did you see how the Statue of Liberty ended up falling to earth in Ohio? We wouldn’t have seen New Miami flattened like a pancake. The Bushes always knew how to get things done, yes sir. Mission Accomplished, like old Dubya used to say. But no, you people all had to vote for that Federalist Isolationist Party brat. Don’t y’all go on sayin’ I didn’t tell you so.” 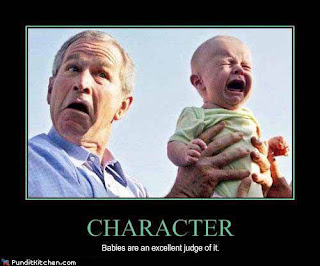 The President herself, Kiara Kardashian, was evacuated from Washington shortly before its destruction with her cabinet, having to leave behind the cryogenically preserved remains of her ancestor Khloe, and was deeply unhappy. “What happens when we finally find a cure for the terminal narcissism disease?” she was heard to ask, seemingly ignoring the reality that millions of her citizens were dead, the country was shattered, its largest cities blasted into oblivion, and its survivors were looking for answers. “Granny Khloe’s going to be pissed, people, pissed!” 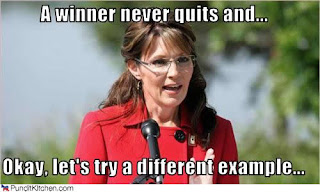 Queen Sarah VII, the self titled Empress of the 500 acre Duchy Of Wasilla, a walled off independent enclave in the heart of the state of Alaska, issued a statement. “Those aliens, by golly, they didn’t even try comin’ out this way, you betcha. They know we got ourselves lots of guns and phasers and gosh golly thermal grenades, and we ain’t afraid to use ‘em, you betcha. Like the first Queen Sarah said, I can see Russia from my house!”

And yet humanity has survived. The alien invasion has been halted and defeated. Not by a rag tag army of misfits, as might have been the case in old disaster films of the 20th and 21st centuries. But by one person. As it turns out, the one person the world needed to get the job done. 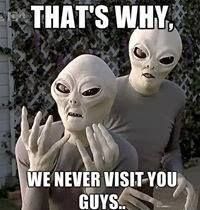 After laying waste to much of the world, the Tawrae turned their attention north of the American border, to Canada. Scientists and military officers had been perplexed as to why the country had been spared up to that point. Dr. Millicent Stanhope, a physicist with North America Space Command, told reporters, “The working theory we had was that the enemy perceived the country as far too cold for their liking. I mean, they left Alaska alone too, so our military bases up there were unaffected. A bit of a shame they didn’t at least blast that irritating Duchy Of Wasilla. Wait, did I say that out loud?” 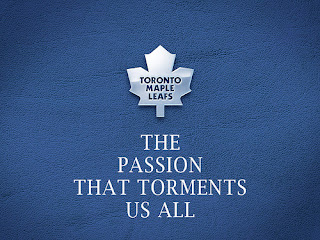 Some of the fleet attacked Toronto, interrupting a rally by fans of the Toronto Maple Leafs, who had been desperately deluding themselves into the hope that this year would be the year their team won the Stanley Cup, despite not having had won it for three hundred years now. Most of the alien fleet landed in southern Alberta- a curious break with their procedures up to that point- their ships had laid waste to regions from altitude. 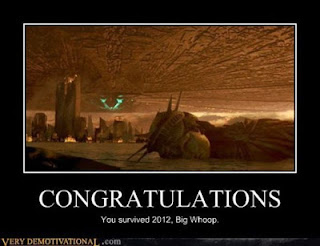 Thousands of heavily armed reptilian shock troopers poured out and took up position. So did their Grand Emperor, Tavx Mrothmar, eight feet of pure ugly, drool, and crankiness. Waiting there was a lone figure in red serge. It was a Mountie, and she looked annoyed.  It was the legendary Inspector Wynonna Ulrich, one in a long line of cranky Mounties, going back to the beginnings of the police force in the 19th century with Zane Ulrich and including the esteemed but cranky Lars Ulrich. All of them cops, all of them thoroughly dangerous, all of them seriously grouchy. 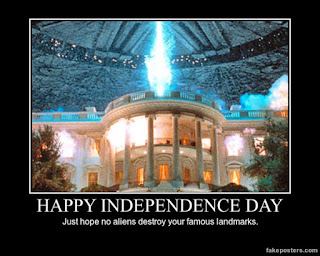 “I’m Wynonna Ulrich. Lay down your arms and surrender,” Ulrich told the aliens, witnessed at a distance by onlookers, too scared out of their minds to run from the sight of alien ships, and too baffled by the one woman standing up to them.

Ulrich sneered. “I am not that Wynonna Ulrich.” 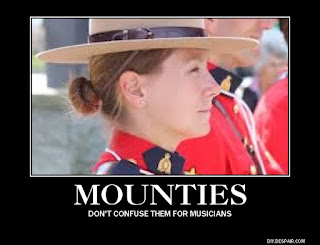 What followed, according to witnesses, was a brawl her distant ancestor Lars would have been proud of. The Inspector smashed through the lines of Tawrae shock troopers, carving a path of destruction and broken bones, kicking alien butt and leaving them crying. In the end, with the fleet ships blown to oblivion from within, and the broken bodies and agonized moans of Tawrae troopers all around her, she had Mrothmar by the throat, most of the bones of his body broken. “I don’t suppose it’s too late to ask for your holo-autograph, is it?” Mrothmar managed to ask.

Ulrich finished him with one last punch, dropping the deceased emperor’s remains before her. Canadian police and military have taken the surviving aliens, heavily wounded and perhaps a mere twentieth of the force that landed, into custody pending decisions on what to do about them. The remainder of the fleet fled at top speed, leaving behind pleas of clemency in holo-messages, apologizing for “that whole destroying most of your planet thing, and by the way, please don’t send that angry woman after us, we’re really, really, really sorry.” 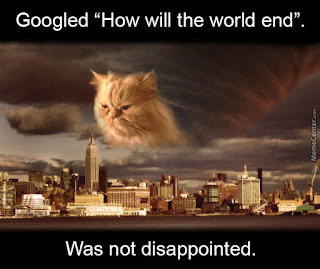 As for Ulrich herself? She returned to her home, for a change in uniforms and a shower, what with all the orange blood she ended up getting on her during the epic brawl. Then she came back to her detachment, where the press was waiting.  She wasn’t in much of a mood to talk to reporters, particularly after one entertainment reporter spoke up. “Skip Jones, New Hollywood Tonight. Wynonna, what will the rest of Poptallica think of you moonlighting as an alien killer?”

Ulrich’s eyes narrowed. “You have five seconds to run.”

Jones looked confused. “Run? Run where? For what?”

Ulrich sighed. “To hell with the five seconds.” She closed the distance, and only in that last moment did Jones seem to understand he was in danger.  He turned and started running, the Inspector close on his heels. At last word, Jones had fallen- or been thrown- into Tombstone Canyon. He won’t be missed. 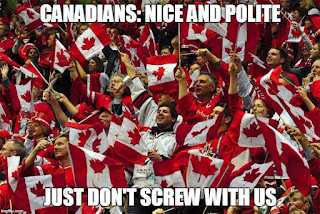