Ghosts Stealing Third Base In The Corn Field 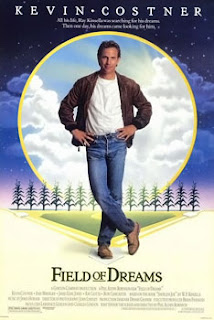 “Man, I did love this game. I’d have played for food money. It was the game.... the sound, the smells. Did you ever hold a ball or glove to your face?” ~ Shoeless Joe Jackson

“We just don’t recognize life’s most significant moments while we’re happening. Back then I thought, well, there’ll be other days. I didn’t realize that was the only day.” ~ Doc Graham

“The one constant through all the years, Ray, has been baseball. America has rolled by like an army of steamrollers. It has been erased like a blackboard, rebuilt and erased again. But baseball has marked the time. This field, this game: it’s part of our past, Ray. It reminds us of all that was good and that could be again.” ~ Terrence Mann The 1989 fantasy drama Field Of Dreams has established itself as a beloved classic, particularly around Father’s Day, and is, among other things, a supernatural tale, a story of the power of dreams and magic,  and a sentimental (in the best of ways) analogy about life. It boasts a terrific cast who fit their roles perfectly, and is based on the novel Shoeless Joe, by W.P. Kinsella, who wrote his surname into the characters and would end up having a good deal of input into the film adaptation.

The film introduces us to Ray and Annie Kinsella (Kevin Costner and Amy Madigan), a couple in their thirties who have settled down to a quiet life of corn farming in Iowa. They have a daughter, Karin (Gaby Hoffmann), and are content to live away from the busy city and feel the grass grow. Ray is out in his field one day, however, when he hears a voice, just a whisper, telling him, “if you build it, he will come.” Ray doesn’t quite know what to make of it- was he hearing things? Have other farmers heard weird things in the back forty? 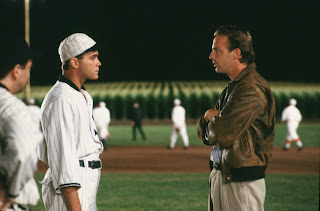 The voice is persistent, and Ray sees a vision- a baseball diamond carved into his field of corn, and with it, perhaps the return of the disgraced but legendary Chicago White Sox player “Shoeless” Joe Jackson (Ray Liotta), who’d been a hero to Ray’s late father, with whom Ray had unresolved issues. While his wife is sceptical, she lets him go ahead and build the diamond. And one night, the family spots a baseball player in their diamond. It’s Jackson himself, a ghost somehow come back to vivid life. 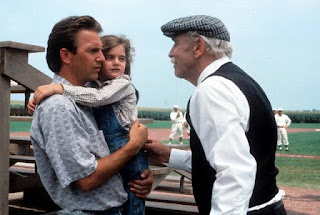 Director Phil Alden Robinson wrote the screenplay and helmed the production. The narrative of the book is closely adapted (with one major character having a name change). It might surprise the casual viewer that the author of a story so deeply entrenched with Americana is in fact Canadian- W.P. Kinsella was born and raised a Canadian, and continues to live here. Robinson had first read the acclaimed book after publication, bringing it to the attention of producers Lawrence and Charles Gordon. 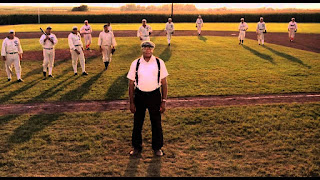 The themes of dreams, hope, family, and possibility play out throughout the film, and Robinson’s screenplay, filled with advice from Kinsella, is a strong one. It invests the characters and dialogue with a strong sense of character and authenticity- the old time ball players sound exactly like you’d expect them to sound, while the reclusive pacifist writer comes across as one might think of him. There’s never really an explanation for why these baseball players are able to turn up in this field, or anything else that occurs during the film- nor does there need to be an explanation. The audience accepts it for what it is, and accepts the poetic vision of where the film ends up, simply because the film is that good. 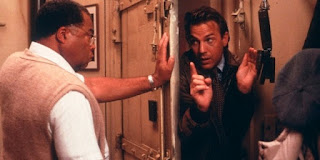 Robinson had a number of earlier directing and writing credits to his name- among them the screenplay for the delightful Steve Martin and Lily Tomlin comedy All Of Me. After this film, his resume would end up including Sneakers, The Sum Of All Fears, and Band Of Brothers. He shot the film on location, mostly in Iowa and Illinois (with some work in Boston around Fenway Park), crafting a baseball diamond into a corn field. The filming process gives things that strong authenticity- rather than be on a set, you feel like you’re among stalks of corn, or on a lit diamond late at night (Jackson’s remarks about the lights feeling out of place ring true as well). The ghostly baseball players might be dead, but they’re real enough, looking like they stepped out of a period photo in their uniforms, and the performances fit in with the authentic mood of the rest of the film- the actors carry themselves physically as baseball players. Robinson also enlisted James Horner for the music score- a perfect choice, as the composer gave one of his finest scores, quiet at times, melodic and dream like. 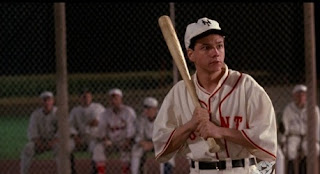 There’s a dual role in the film, with two actors playing the same character decades apart. Frank Whaley plays a young Archie “Moonlight” Graham, a brash young player eager to get in the game, seemingly before his one shot at the major leagues (in 1922), who encounters Ray (and seems oblivious to what to his eyes should be a vehicle decades ahead of his time. The actor plays him as wide eyed when he finds himself face to face with big players he would have known, and just a little bit cocky at the same time. 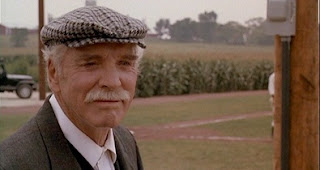 His elderly counterpart, Doc Graham, is played by Burt Lancaster in one of his final roles. It’s a wonderful character, an elderly Minnesota doctor late in life (and a ghost, at that). Decades earlier he had his one chance in the major leagues, but those days are long behind him. He’s satisfied with his life- his remark about had he only been a doctor for fifteen minutes being a tragedy rings true- and yet he’s never forgotten what baseball meant to him. Lancaster invests the role with a quiet wisdom and a twinkle in the eye. It’s tremendously likeable character- and one, it turns out, that’s based somewhat in a real doctor. 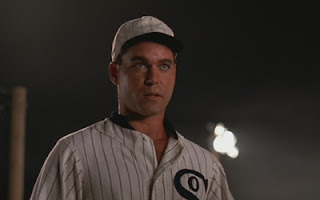 Ray Liotta plays the pivotal role of “Shoeless” Joe Jackson in different ways. The character is based on the real man, the disgraced ball player who was kicked out of the game but insisted he’d done no wrong, and taken in a different direction. Here he’s a ghost, the first of numerous ball players who come to the diamond. Liotta gives the character an enigmatic quiet wisdom at times in the way he plays Jackson, while also playing him as a bit coarse, sure of himself, and ultimately yearning for the game he loved. It’s my favourite role for him. 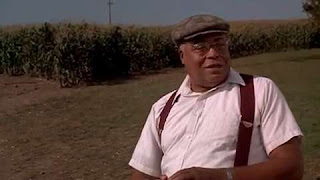 James Earl Jones gets a great role as the reclusive writer Terrence Mann. In the book, the character was the real life recluse J.D. Salinger (who threatened lawsuits after the fact if the book ever got adapted into a movie. Robinson chose to change the name and race of the character instead, and we get a  man who’s withdrawn from the world, from the fame his writings gave him. He’s suspicious and grouchy at first, particularly when Ray first tracks him down. Beyond that though is a similar sort of dreamer, who doesn’t question The Voice when it speaks again to both Ray and himself, and Jones gives the role depth and gravity and a good dose of humour in how he plays Terrence. There’s also a man who remembers what the game meant for him in his youth- and that shows itself so well in what he says about it. 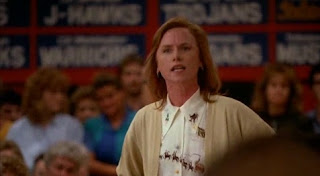 Amy Madigan brings out the best in her role as Annie. At first she’s understandably sceptical of her husband’s mysterious whisperer- and yet she understands the need in a marriage to accept dreams and to trust on a fundamental level. She’s outspoken and thoughtful- particularly about the issue of book censoring, in a memorable way- and comes to share in the vision and the dream without hesitation. Annie is spirited, something that Madigan really invests in the character, and tremendously likable. The actress plays well with Costner- the two actors bring such a grounded, genuine feel to their characters that Annie and Ray come across as a believable married couple. 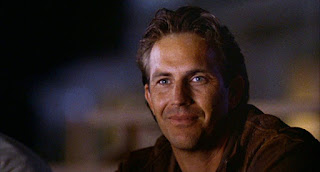 This is one of my favourite roles for Costner, who gives the character a mixture of wide eyed wonder, occasional disbelief, and casual charm. It’s the second of his baseball trilogy, in between Bull Durham and For Love Of The Game. Ray is likable, something that comes across when we first meet him through an introductory monologue, and carrying on through the film. He’s stubborn at times, wondering at the oddity of what he’s being called to do, and yet he does it. There’s another underlying element for the character- regret over the estrangement that was in place with his father before the old man’s death- that plays out through the film, and ends up in emotional catharsis. Costner invests these elements into his performance, and we can’t help but like Ray. 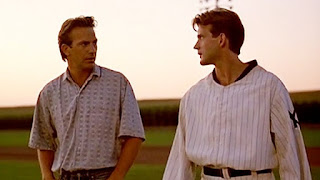 Field Of Dreams was an audience favourite early on, and has become a beloved classic ever since. As part of Costner’s baseball trilogy, it’s radically different from the other two movies, and it’s the sort of film that the golden age director Frank Capra, a dreamer himself, would have gone for. It’s also a film that speaks truth and tugs at the heart strings in many ways- if you aren’t moved by the ending, I would find the issue of your having a soul is in dispute.

Posted by William Kendall at 7:00 PM