A Hobbit, A Dwarf, And A Dragon Walk Into A Bar...

Now then, it's another movie review today, and in this case, it's for one just out in cinemas near you. Go see it. Though if you've got profound fears of spiders, heights, giant monstrous reptiles, or Orlando Bloom's aim, you might have a problem. 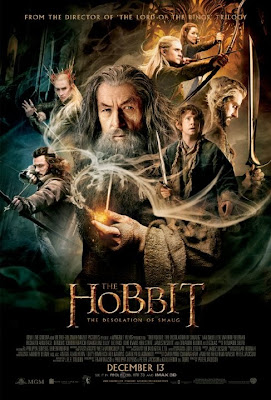 "If this is to end in fire, we all burn together." ~ Thorin Oakenshield

"Aren't you going to search me? I could have anything down my trousers." ~ Kili
"Or nothing." ~ Tauriel

"I am king under the mountain!" ~ Smaug 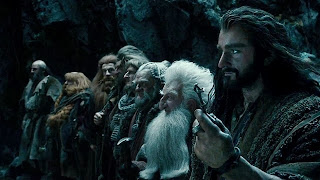 The second film to emerge from The Hobbit novel by Tolkien is now out in theatres. Director Peter Jackson, in the process of a trilogy that turns what was a children's book into an eight hour plus three part epic, gives us a tense, whirlwind ride in this middle chapter entitled The Desolation Of Smaug, adapting the story, adding in material from Tolkien's appendixes, and other elements along the way as thirteen dwarves, one hobbit, and a wizard continue to navigate their way along the paths of Middle Earth towards fulfilling their quest. Jackson gets his cameo out of the way quickly in a blink and you'll miss it opening walk by set in the village of Bree, twelve months earlier, when Gandalf (Ian McKellan) first meets Thorin (Richard Armitage). Then we move to the present day action, where our company of dwarves, Gandalf, and Bilbo (Martin Freeman) are on the move, being pursued by the orcs under the command of the loathsome Azog the Defiler (as is the case with orcs, Azog is a really ugly brute, and I know, I'm going to get complaints from the Orc Defamation Society for that). 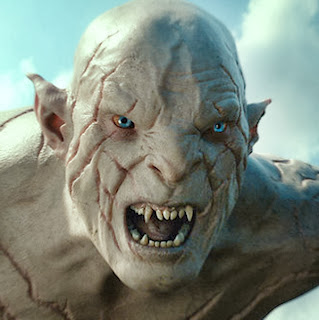 Their journey takes the company through the dark wildness of Mirkwood Forest, to the human settlement of Lake-town, and to the Lonely Mountain, where their old kingdom of Erabor is currently under occupation by the dragon Smaug. Along the way they encounter elves, giant spiders, and men. There is a familiar face from  Lord of The Rings, Legolas (Orlando Bloom), and we get more of a sense of his father King Thranduil (Lee Pace) who appeared briefly in the first film. We also meet a non-Tolkien creation, Tauriel (Evangeline Lilly), a woodland elf maiden and fierce warrior. And there are other additions from the Tolkien side of things: Bard the man from Lake-town, played by Luke Evans, and a brief appearance by a shapeshifter named Beorn (Mikael Persbrandt), a man who can change into a fierce bear. The path takes the company in different directions at times, most notably Gandalf following his own road in pursuit of a dark threat, but ultimately the lion's share of the group find themselves in a confrontation with their ultimate enemy, the very fearsome dragon Smaug, who we've seen briefly in the first film but who makes himself very much known here. 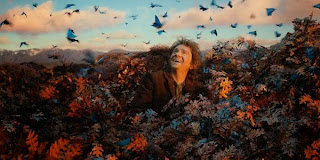 Jackson, his crew, and the special effects teams are all back in top form with this one. This includes Andy Serkis (otherwise best known as Gollum, but who has taken on the job of second unit director with these films). Serkis, who's made a career of motion capture performances, also gave tips to Benedict Cumberbatch on the style for his own work, as some of his performance as Smaug the Dragon involved motion capture. It seems Cumberbatch watched reptiles in preparation for that part of his role, and his performance (more on that in a bit) is matched well with the CGI work on the dragon from the crew. When we see him in a vast cavern filled with enormous amounts of coins, jewels, and wealth, and as the dragon stalks our heroes through that cavern beneath the mountain, it looks real, looks as if it's occupying the same space as them... and it's huge. It looks fierce, it looks dangerous... and it's not a friendly dragon (no Sean Connery playing Draco with this one). Smaug is a menace, and the entire last hour of the film is tense because of his presence. Smaug alone is a worthy technical achievement, but the crews do other great work with the look of Mirkwood, for example, or the spider sequence. 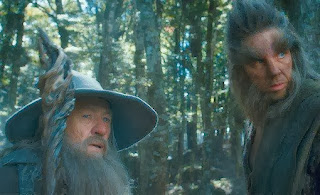 The design of the wood elves realm within Mirkwood is particularly engaging to the eye, a mix of CGI and set work, and Lake-town's design also catches our attention. So does the realm of the Necromancer, the object of Gandalf's search, a dark and dreadful place where an evil force is consolidating its power. Jackson makes good use of location, using New Zealand as a stand in for Middle Earth to good effect as usual. His camera work can be dizzying at times, but it works for the scale of the film (do go out of your way to see the 2D version of the film though). And his crew as usual pays attention to every detail, particularly in set design and costuming. No detail, it seems, was overlooked, and the crew gives us a fully formed world. As before, Howard Shore returns to give us the music score, which I love- with hints of older themes from the first film and Lord Of The Rings, but also new material. 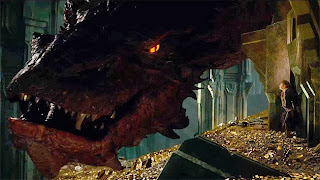 It's an epic, of course, but the actors are what stands at the core of the film, and what keeps it grounded. Cumberbatch pulls double duty here. He does the motion capture side of things for Smaug, but also the voice, and the voice itself is malevolent and frightening. There's a grand darkness about Smaug; you could close your eyes and just listen to the voice and feel unnerved. Cumberbatch captures the sense of a dragon well, a greedy monster eager to hold onto every bit of his stolen treasure. He also appears as the shadowy Necromancer again, more of a special effect visually, but we hear his voice, and in fact his true identity stands revealed here. He of the strange name is one of the actors most in demand these days, and that's for good reasons. Though we don't see him as an actor on screen, we feel his presence absolutely underpinning everything. Evans, as the hesitant human ally Bard, is wary of the dwarves; he relates to them in complicated ways, worried that they bring danger to his home and yet at the same time is principled and brave. There's more for him to come.

The woodland elves are a mixed sort this time out. Pace plays Thranduil as more antagonistic towards the Dwarves than in the book, suspicious of their motives and with his own designs on the wealth of the Lonely Mountain. Evangeline Lilly as the new creation Tauriel is an interesting addition. She's brave and principled, not as suspicious of dwarves as some of her people; in fact, she has a bit of a flirtation going on with Kili (Aidan Turner). Lilly, best known for her role in the television series Lost, provides us a new female character that feels true to the world of Tolkien, while not being one of his creations. She can take care of herself, just as capable and adaptive a fighter as her counterparts. And Orlando Bloom returns as Legolas, despite having had not been in the book. Jackson gives him a lot to do (killing orcs in a running battle here and there, for instance). He's much more suspicious of dwarves, though willing to go against orders in aiding them somewhat- this is sixty years before his friendship with Gimli (who we see in a picture ever so briefly as a child). He looks much the same as he did in the trilogy, still seemingly fearless and as deadly as ever. 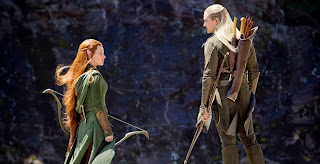 The dwarves themselves are as entertaining as ever, a motley crew. Tolkien developed some in the book more than others, so it was Jackson and his fellow screenwriters who fleshed them out, along with the actors themselves, all returning once again in their roles. The crew gives each a distinctive look, and the actors give them distinctive personalities, even if the audience still needs a score card to keep track of them. Turner gives Kili a dashing, roguish charm as one of the more handsome among the dwarves, shamelessly flirting with Tauriel. Ken Stott as Balin is the wisest of the party, worrying about the effect Thorin's obsession with reclaiming his homeland is having on his chieftain. Stott gives the role a quiet dignity. And Armitage, playing Thorin, delves deeper into the role. As an audience, we find ourselves wondering about what's driving him as we get more into the story. Is it about doing what's right for his people, or is he being driven by more selfish motives? Armitage continues to bring a ferocious quality to the character, suspicious of those outside the party, and determined to move forward. 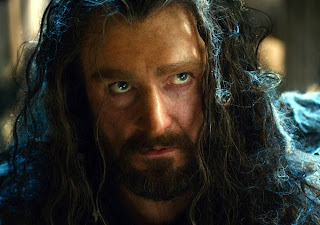 Ian McKellan has been playing Gandalf for five films now, and he continues the streak of playing the wise, enigmatic wizard very well. His take on Gandalf always feels like that of a man who knows more than he says, who notices much about what goes on around him, and who is driven by worries for the future of the world around him. He perceives the darker threat underlying the narrative, and his own quest takes him in a dangerous direction against an even more threatening foe. McKellan knows this character so well, and seeing  him in this role is very welcome. 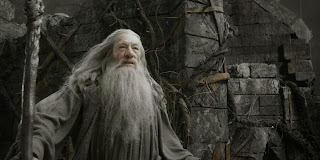 Martin Freeman as the younger Bilbo continues to give us a character who reflects the Ian Holm version from the Lord of the Rings trilogy but still bears his own stamp on the performance. He's falling somewhat more under the influence of the Ring that has come into his possession. Yet at the same time, he's stepping out from the anxiety that preoccupied him at times in the first film. Freeman shows us a Bilbo more sure of himself, confident and moving foward, quickly thinking on his feet as situations unfold before him. Bilbo is able to adapt well in a crisis, and Freeman conveys that quality admirably. 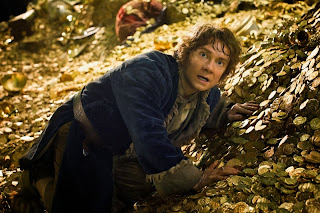 The second act in the trilogy moves the story along and really drives up the tension. It takes our company along different paths, but with the sense that the story will converge yet to come. For those of us who love to spend time in Middle Earth as told by Jackson and company, The Hobbit: The Desolation Of Smaug is very welcome indeed. I look forward to seeing the final chapter in this series.

If only we didn't have to wait another year! 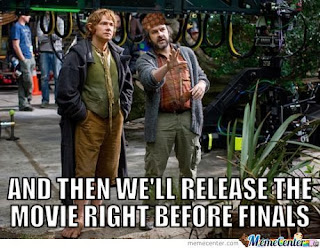 Posted by William Kendall at 7:29 AM