The Most Elegant Family In Concord

Before getting into anything else today, some links for you to peruse. Go and check out Norma's blog for her thoughts on the writer's schedule. Go on over to Gina Adams' second blog American Small Towns for her latest small town profile. See what Lynn has to say about Christmas trees and dogs.  Speaking of dogs, we have a blog with the Square Dogs from AngryParsnip for you to see. And have a look at Krisztina's blog for a Christmas cookie recipe.

Now then, it's movie review time, and I'm reaching back to the mid-nineties for this one, sort of a Christmas movie (well, it does feature a turning point scene set at Christmas, so...). Anyway, shall we begin? 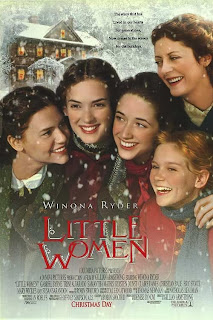 Little Women has been adapted for film and television before; the beloved novel by Louisa May Alcott about four sisters during and after the Civil War remains a classic today. Alcott wrote two volumes that were collected together, followed by other tales of the March family. The 1994 adaptation remains my favourite (though the Kate Hepburn version from the 1930s is outstanding as well).

This film gives us several years in the lives of four sisters, Jo (Winona Ryder), Meg (Trini Alvarado), Beth (Claire Danes), and Amy (Kirsten Dunst and Samantha Mathis), as they experience the hardships of life on the home front during war, the changes of society around them, tragedy and loss, and love. They are guided by their mother Margaret, affectionately called “Marmee” (Susan Sarandon), along with their gruff great-aunt March (Mary Wickes) and the family housekeeper Hannah (Florence Paterson). Their father is away at war when the film starts, and his presence is a subdued one even as he returns. Mrs. March is the hands on parent in this family, teaching her daughters to value themselves as people. 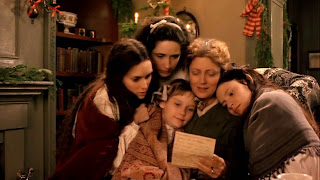 The sisters are all different. Jo is something of a tomboy, argumentative and imaginative, a writer who seeks the freedom that will come without having to worry constantly about money. Meg is the eldest, conservative in her outlook, concerned about appearances. Beth is painfully shy, only open with her sisters. Amy, the youngest, is particularly romantic and flamboyant, especially as we meet her first as a girl played by Dunst, but also as a young woman played by Mathis.

The family lives in New England in a house called Orchard House, doing their best to get by. Their neighbours are the Laurences, a rich family with the gruff Mr. Laurence (the late John Neville) as the head of the house. His grandson Teddy (Laurie, as he likes to be called) lives with him, and is played by a fresh faced Christian Bale. Mr. Laurence is having him tutored after years of the boy being educated in various places in Europe, looking to have him take on a position with the family firm someday. Hence he has brought in a tutor (Eric Stoltz) to get him ready for university. Laurie is drawn to the March sisters, and particularly to Jo, becoming the brother they never had, a fiercely loyal friend whose dynamics with each of them shakes things up. And so we are drawn into the lives of these people in a film that takes us back in time, a film that never loses its appeal, taken from a book that can never lose its appeal. 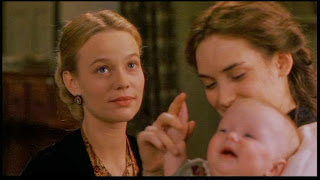 Director Gillian Armstrong took the screenplay by Robin Swicord, adapted from the novel, and worked wonders with it. Her attention to detail shows itself throughout, with period costuming looking like it’s from the mid-nineteenth century. The buildings and settings feel very much of the time, at multiple times of the year as the story unfolds over several years. Everything feels like it’s drawn out of the past, and that goes all the way from locations to the smallest details. And the screenplay emphasizes these very strong women, all in different ways. They’re not perfect people, but there’s such humanity in them, such depth. That’s present of course in Alcott’s novel, and having it carry over into the film simply reinforces that. Even the camera work, the lighting, and edits Armstrong chooses along the way, serves the story. Add to that the beautiful character based music by Thomas Newman (one of the underrated composers in Hollywood, and one of my favourites among film composers), and his score is the icing on the cake. 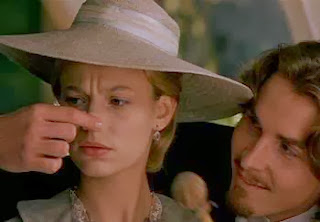 The casting in the film is ideal, but where to start? I’ll start with Sarandon. Her Marmee embodies an inner strength, and a woman of strong principles. She thinks for herself, stresses that her daughters must do the same. She encourages forgiveness (there’s a moment in the film involving an act which for a writer would be unforgiveable). And she is very much the guiding force, the rock upon which her family is based. Her husband’s presence is somewhat subdued, of course, but one gets the impression at least in this adaptation that he accepts his wife being the heart of the family.

John Neville was the great character actor who played many a different role over the course of his career (around the same time he was regularly showing up from time to time in The X-Files as a mysterious member of a shadowy consortium who was something of an ally at times to the pair of FBI agents and at other times a source of profound enigmatic motives). We first get the impression of him as a gruff man, given to the pursuit of wealth, not a terribly friendly man. Yet that changes; when sickness shows itself in the March home while Marmee is away, he freely intervenes with help, and during the Christmas sequence that marks the transition point for the story, we particularly see great warmth and empathy from the man. Eric Stoltz as the tutor John Brooke has a good take on the role. He’s charged with the task of tutoring an unruly student, and there’s an awkwardness about the man’s personality... and yet something about him catches Meg’s eye. Stoltz conveys these qualities well. 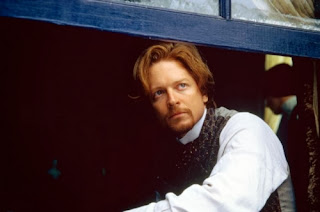 Mary Wickes plays Aunt March in the best grouchy way. One would think this was Grumpy Cat in human form. She’s wealthy, the only member of the March family who is, living all by herself in a large nearby home. She’s concerned about appearances, tries to influence her family as best as she can. Deep underneath all that grouchiness, there is more, even a sense of humour, barely hinted at, but also a loyalty to her family. Florence Paterson as Hannah is practically a second mother to the girls, a wise older woman who has a hands on presence in their lives, and an inner warmth that’s infectious. Paterson really brings these qualities across in her performance. 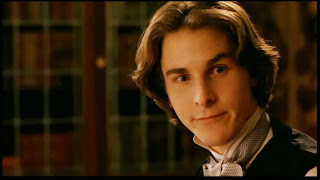 Bale as Laurie is well cast. He was already getting good roles from boyhood by the time he took this role, and as the young man making his way in the world, Bale embodies Laurie just like I would imagine him. He’s passionate and full of mischief, knows what he wants, is willing to do things simply because it’s the right thing to do. He’s loyal to these girls, protective of them and playful with them as well, but also capable of being wounded, retreating into himself when things don’t go as he wished- a situation that shows itself when he is rejected by Jo. He needs to find himself afterwards during a time when he’s become irresponsible and self indulgent and his path leads him in another direction, but ultimately back home. He has great chemistry with these actresses, particularly with Ryder, but also with both of the Amys, in different ways, of course. Bale conveys all of these qualities in the character. The other man in Jo’s life, a professor she meets in New York, is played by Gabriel Byrne, is another example of a good performance. Byrne is one of my favourite actors, and his take on Friedrich Bhaer, a German teacher, is well done. He is drawn to Jo, despite the age difference, intrigued by her thoughtfulness and imagination. It’s a relationship of equals; the two respect each other, challenge each other, and find many common bonds. It doesn’t take long for them to fall for each other, and even so, Friedrich hopes Jo can elevate her work as a writer instead of settling for what’s in demand. Byrne draws on these qualities in his performance, giving us a warm and utterly decent man that we can respect. 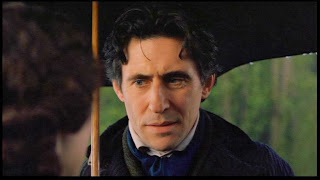 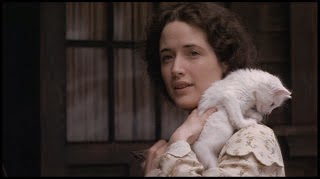 The sisters are very well cast. Trini Alvarado draws on the pensive, conservative qualities of Meg throughout her performance. She’s concerned about appearances too- even if she occasionally strays from that. It’s something she seems to draw from her great-aunt March, though Meg has more of a sense of humour. Her relationship with John Brooke feels very natural as it evolves, and being the eldest sister, she seems to be the one who takes things most seriously. Amy might be played by two actresses, but both convey the essential romantic qualities of the character. Kirsten Dunst as the child Amy is headstrong and dramatic in her expressions, occasionally given to acts of jealousy when she’s not getting her own way. Under that, however, is a young girl who does worry about her family, who makes mistakes and tries to make up for them. Samantha Mathis picks up the role a few years later as a young woman, and while she’s more mature a person, more sure of herself, she still embodies that essential romantic nature Amy has, perhaps best expressing itself in a love of art. The two actresses give us a character that’s complicated, a bit of a brat at times, but someone with depth. 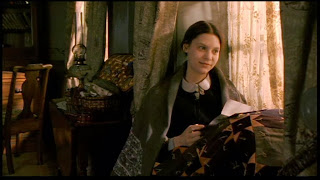 Claire Danes has had a habit of crying on screen in many a movie, and that happens here, of course. She plays Beth in just the right way. There’s such a shyness about the character, and it intrigues me- maybe because I’ve known what it’s like to be shy. She holds much of herself back, comfortable around her sisters but uncomfortable around others. And yet some of the most touching moments in the film are hers. The scene at Christmas with a piano given as a gift by Mr. Laurence will tug at the heart strings. And her final scene is utterly heartbreaking- which makes it beautiful. 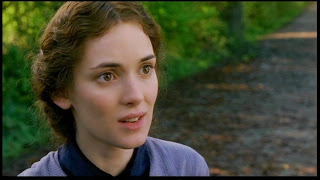 Winona Ryder is the core of the film as Jo, and she takes on each quality of the character. She’s ambitious and headstrong, has a great imagination and a strong view of the world. She’s not hesitant about expressing her opinion, a legacy of her mother, and she feels things deeply. She can be passionate and tempestuous at times, but feels very real, a very strongly grounded character. We like her; her spirit and her intelligence draws us to her, and Ryder brings all of these things across on the screen. Her relationship dynamics with the two men in her life, first Laurie, and ultimately Friedrich, feel very natural, and rooted in strong characterization.

Little Women remains a classic twenty years after it was in theatres, giving us strong, positive girls and women in a family that feels very true to life. It does its source novel a great honour by carrying on the story, and is well served by a fine director and crew, and an outstanding cast who give us characters with warmth, depth, and surprises along the way. 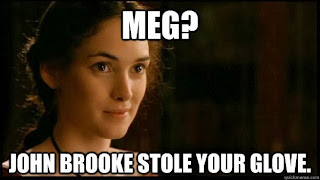 Posted by William Kendall at 7:16 AM