The Hell With Women And Children First! Get Out Of My Way! 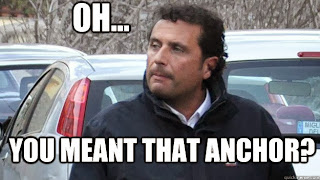 "You get back on board! That is an order! There is nothing else for you to consider. You have sounded the “Abandon Ship.” Now I am giving the orders. Get back on board. Is that clear? Don’t you hear me?" ~ Gregorio De Falco, Italian Coast Guard, 13th January, 2012

"I am so totally screwed." ~ personal thoughts of Captain Francesco "I Didn't Mean To Fall Into The Lifeboat" Schettino, 13th January, 2012. 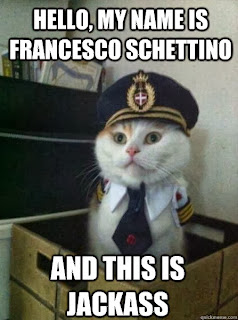 Last week, salvage teams finally managed to right the wreck of the Costa Concordia off the coast of the Italian island of Giglio. I have written of this before (just click on Italy or maritime disasters in the tags below). The damage that has been done to the submerged ship after all that time in the water is painfully obvious. The ship is being prepped to withstand another winter before it can be moved away to be dismantled.

Captain Francesco "Please Stop Making Fun Of My Cowardice" Schettino is currently standing trial for the events of that night, in which he courageously and selflessly (this being Opposite Day) cast himself overboard in a lifeboat long before most of the cruise liner's crew and passengers even got off, and then got his manhood ripped apart by a very annoyed Coast Guard officer (I'd still like to buy De Falco a beer.) Rumour has it Schettino asked to go aboard and get his wallet.

Thirty two people died that night. And Costa and its parent company Carnival Cruises have done everything possible to shield themselves and deflect blame. 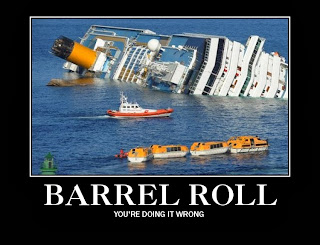 At the time of the disaster, editorial cartoonists employed the story in various ways in their work. Last week, a couple of Canadian artists did the same in papers here, in regards to the incompetent alcoholic rage machine Mayor Rob Ford and to our nefarious Senate, which has been having problems of its own in the last few months... 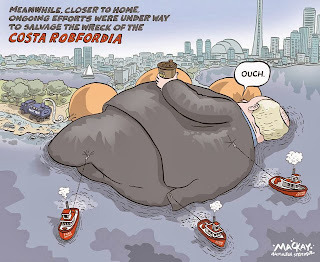 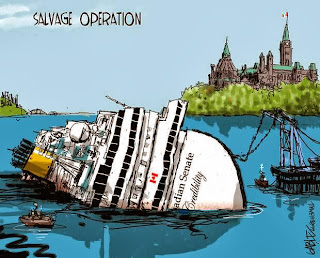 I'm sure the people of Giglio would love to see this entire chapter put behind them once and for all, to be rid of that ship entirely. I'm sure Francesco "I Was Not Distracted That Night" Schettino wishes he had been doing anything else that night instead of entertaining a lady friend, showing off, being reckless with a very big ship... whatever you want to call it. 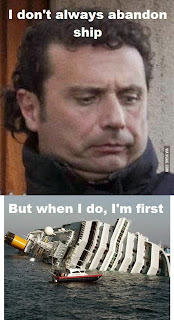 Francesco, Francesco, you've gone down in history. Your face belongs in the Oxford Dictionary. Alongside the definition for incompetence or stupidity.

Maybe we can make a new word to define catastrophic screwups.

"Hey, I totally Schettionoed my testimony in court."

"Have I mentioned how badly I Schettinoed things with the in-laws?"

"What do you mean, my tax audit got Schettinoed?" 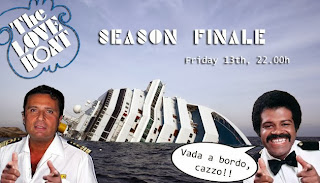 Posted by William Kendall at 6:19 PM