George Washington Versus The Cherry Tree Of Doom

Before getting started today, some links! First, head on over to Lyn Fuchs' blog Sacred Ground, where I wrote a guest blog on the Battle of Gettysburg, which is being marked in Pennslyvania for the 150th anniversary of the battle.

Second, Authors For Oklahoma has a third blog up, with three sets of books and ebooks to be raffled off for the American Red Cross. We've got two pages set, at Wordpress and over at Blogger. We have three more blogs like that to come.

Third, my partner in crime Norma has a blog set today, having alphabetical fun with movies. Take a look there and leave her a comment. Particularly if you take the challenge!

And over at our joint blog, just in time for the Fourth of July, we've got a musical interludes blog about Mel Gibson's hatred for the English. Come on over, give the music a listen, and tell us if you've ever seen the movie in question...

Now then, to the mayhem before us.... 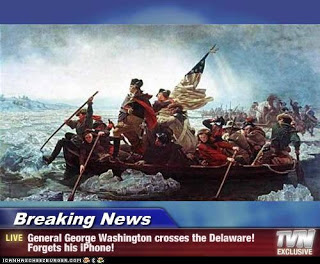 "I cannot tell a lie. I never cared for the taste of broccoli." ~ George Washington, 1775

"Dear Martha, just a word to let you know I am well. Achieved astonishing victory over Hessians at Trenton the day after Christmas. Timing was impeccable. Most of them were hung over. Marched away with arms, provisions, and liquor. Jebediah Cooper broke into the liquor supply. Much annoyance from the men about the depleted liquor, but fortunately the hostilities are directed where they belong. At old Jebediah. I don't believe he'll last the night." ~ George Washington, December 27th, 1776 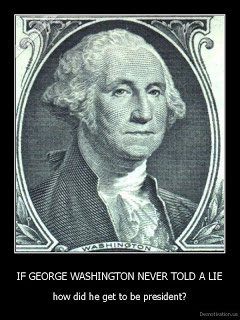 "Now, Adams, I know he can be a pain in the neck, but we're trying to form a country here, a shining example for the world. Sometimes that even means we have to put up with colossal dullards like John Dickinson." ~ Benjamin Franklin, June 30th, 1776 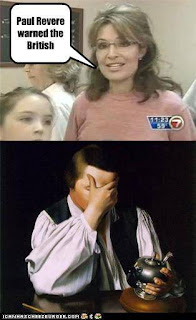 Tomorrow is the Fourth of July, when Americans rise up and celebrate throwing off the (apparent) oppression of the British by setting off fireworks, decorating the land in the Stars and Stripes, and having a drink. Then they go downtown and throw tea in the harbour. If there's not a harbour, they throw tea in the aquifer. If there's not an aquifer, they're in Death Valley, and they've got problems of their own.

Since most of my weekly readers are Americans, I must therefore mark the day with a salute to my southern neighbours. 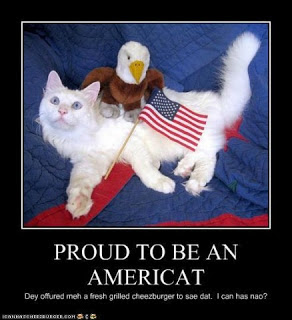 Last year I did a blog for the Fourth of July consisting of locales in half of the states, some I've been to, and others I'd like to see for myself. I'll pick that up again this year, and continue on with the theme, trading off from year to year between the two halves (this is going to pose a problem the next time I have to pick places from Delaware or Rhode Island)...

A happy Independence Day, my American readers and friends. Up the colonies! Down the British!

Posted by William Kendall at 7:06 PM