So You Want To Screw Up Crisis Management, Huh? 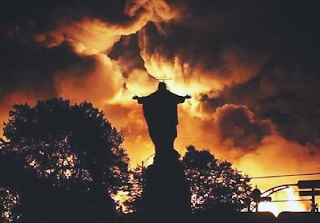 A week and a half ago, the small town of Lac-Megantic, Quebec suffered a tragedy, as an unmanned train towing cars of fuel descended into the heart of town past one in the morning, derailing, setting off explosions that tore through buildings, took lives, and shattered the lives of so many residents. In a town of six thousand people, fifty are dead or missing and presumed dead- nearly one percent of the population. This is a town where everyone knows at least someone who has died. 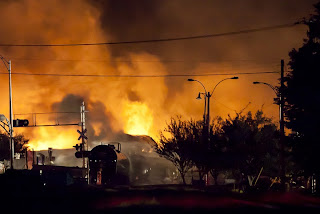 Some may have been vaporized by the blast, and so no remains will ever be found. A local bar, the Musi-Cafe, seems to have been ground zero for casualties, filled with customers and employees that night, most of whom were killed in the explosion. Other buildings, including homes and businesses, were destroyed or damaged. The building housing the town's library and archives was destroyed. Fuel spills have contaminated the area. Firefighters from other parts of the province and over from the Maine side of the border joined the fight to put down the inferno. At one point that night, the fires were so intense that Lac-Megantic could be seen from space. NASA took pics before and during that night, and you can see the difference below. 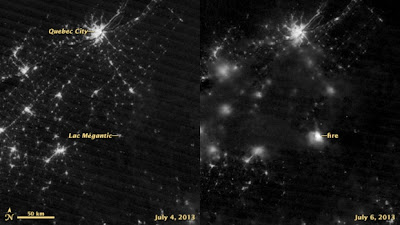 People have been slowly returning to homes, but their lives are changed forever. Many families have lost loved ones. Their town has been torn apart. I've never been to the area myself, but it seems that it was known as a lovely area to visit. Local First Nations tribes knew the lake well, spending thousands of years living in the area. Continental Army soldiers came through on the march to Quebec City during the American Revolution, led by a general by the name of Benedict Arnold. White settlement really started up in the mid-nineteenth century, with the railroad being a key in establishing the town.

And now this happens. The investigation continues on site, with police, firefighters, and other officials working on the scene, looking for other remains. The core of the town remains sealed off, for the moment, a blackened scar. There are inconsistencies as to what happened; we know the engineer- the only crew member on the Montreal Maine and Atlantic Rail (MMA) train that night- shut down operations and went to a hotel for the night, to get some sleep for the night before handing over responsibility for the train to another engineer. We know there was a fire in one of the locomotives shortly after, one that was put out by local firemen soon thereafter. What we don't know is if at that point, someone secured the air brakes on the locomotive, or kept one of the locomotives running, a critical requirement for a train that's sitting idle for the night. 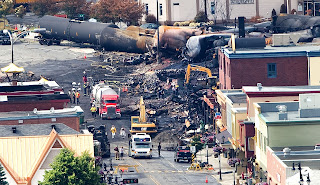 Whichever way it went, the train started moving on its own, unhindered by brakes, hurtling downhill towards Lac-Megantic. In the heart of the town, the derailment happened- the locomotives just kept going- and the explosion took so many lives. Questions are being asked. People are wounded. And people are angry. There might never be closure.

It is a story that's certainly drawn the attention of my country's editorial cartoonists, who are examining the fire, the response, the questions over lax safety regulations (our federal government thinks it's perfectly acceptable to cut inspection standards, and let the industry police itself).... 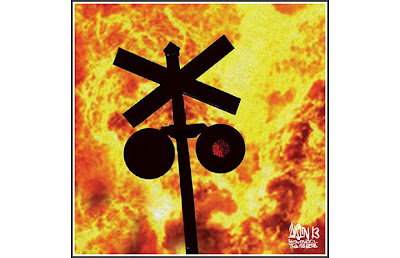 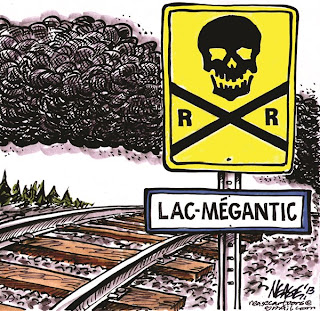 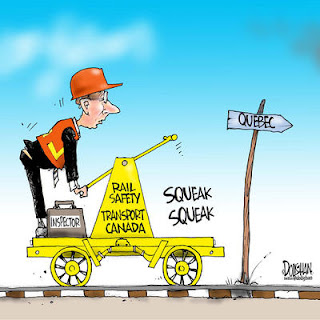 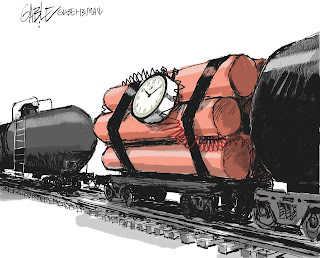 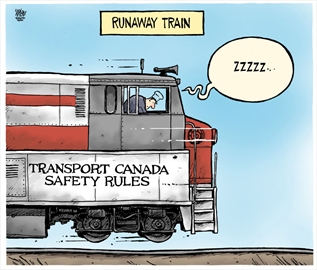 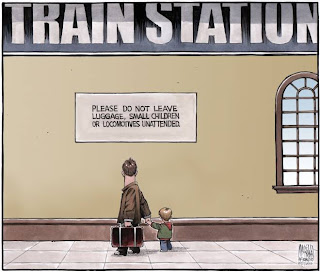 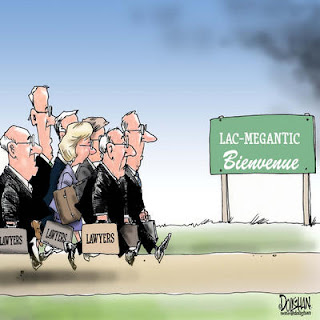 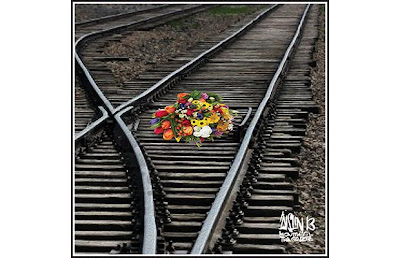 It doesn't help when the chairman of the company that owns the MMA takes the handbook for company crisis management, throws it out the window, and proceeds to make a mess of things. Edward Burkhardt and his company Rail World Inc. own the short line that is the MMA, and from the beginning, he made one mistake after another. It took him over four days before he actually turned up in Lac-Megantic. He spent his time on the phone giving interviews and speculating, claiming that he could do better from his offices in Chicago in speaking with insurers and the media. His company issued contradictory statements first in English, then in badly translated French. He speculated on the cause of the derailment, what went wrong, blaming vandals or the local firefighters, contradicting himself at every turn. His failure to come to the site quickly came across as uncommunicative, in fact as distant and remote. He employed completely inappropriate humour in remarks to the press, suggesting that he hoped no one would shoot him when he turned up, since he wasn't wearing a bulletproof vest. 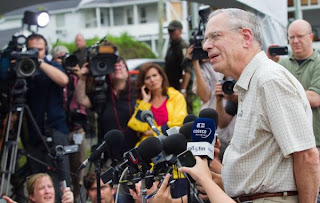 Burkhardt finally turned up in Lac-Megantic a week ago, giving a rambling press conference through the streets. Some of the locals saw him, and jeered, expressing their antagonism. He said he understood the extreme anger against his company from the local residents. He pinned the blame for the brakes not being secured on the engineer- despite the facts not yet being known- effectively throwing the engineer to the wolves. Burkhardt said the company would rebuild through town, that they'd be there for the long term. He turned the conversation more on himself, remarking on how he felt awful, how his net worth was a lot less now than it had been a week ago. Anyone who consults on crisis management will tell you that in this situation, if you're a company head, you don't make it about yourself. Those remarks, along with the joke about the bulletproof vest, was about him making it all about himself. 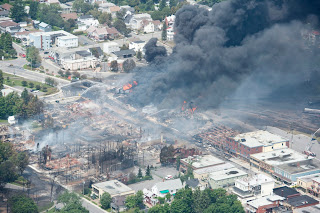 What he did not do, and what perhaps he should have, was to actually speak to locals, to go to the shelters where the displaced are staying. He did not face their anger head on. He did not let them rant at him. That might well have taken more bravery than he's capable of. Instead, he's looking more to the company's liability in this disaster, and to the bottom line that claims it's perfectly acceptable to cut corners and labour costs at the expense of safety. One crew member to man a train? Well, in his world view, two engineers would distract each other, and that would be more dangerous. 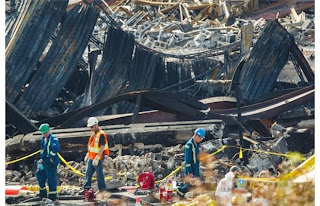 Sure. Right. Burkhardt has left Lac-Megantic after his awkward press scrum and a tense conversation with the police. The premier of Quebec is disgusted with him. Local police have been managing the crisis far better, all told, giving facts only when they have them, speaking in as calm and precise a manner as possible. Mayor Colette Roy-Laroche is by all indications doing the same, dealing only in facts, responding to the crisis in her community with tact, leadership, and compassion.

Contrast that with Ed Burkhardt, who has come off increasingly like the former head of BP. You might recall that Tony Hayward was the chap who during the oil spill in the Gulf Of Mexico complained that he only wanted his life back. Burkhardt has completely screwed up crisis management in this matter. If there's justice in this world, it's going to come back to bite him hard. He surely deserves it. 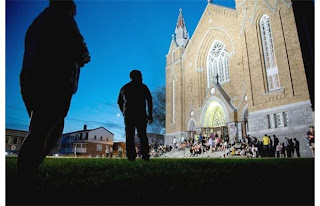 It occurred to me a few days back that he was reminding me of someone else. Not physically, of course; the two men look nothing alike. But both men have completely- and spectacularly- flubbed a crisis in the worst possible way.

Edward Burkhardt is this year's Captain Francesco "I swear, I fell into the lifeboat" Schettino, who has been written about before in this blog.

I wonder if they're related... 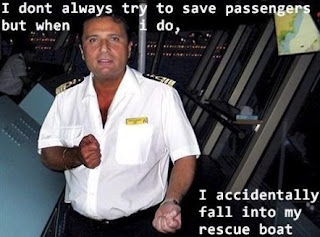 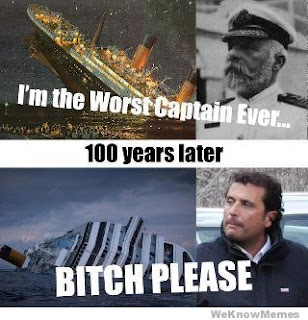 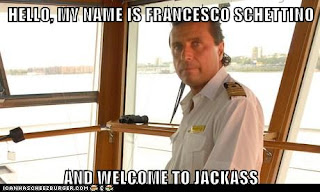 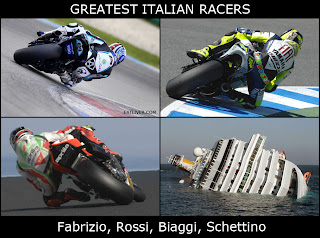 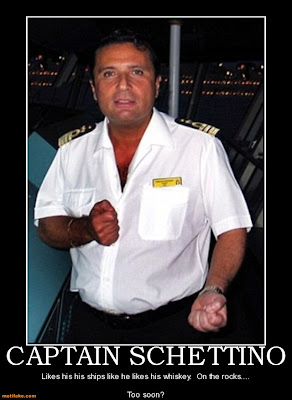 Posted by William Kendall at 6:55 PM