A Day In The Life Of A Garden Gnome

Before setting to the mischief of the day, we have our fifth Authors For Oklahoma blog set up at Blogger and over at Wordpress as well. Head on over to either, check out the three sets of books being raffled off with proceeds headed to the Red Cross in the wake of the tornado in Moore Oklahoma. It's a good cause, with plenty of good books at hand.

Now then... I should probably say in advance of this that I had a few moments where I asked myself, "did I really write that?" Just so you're warned. 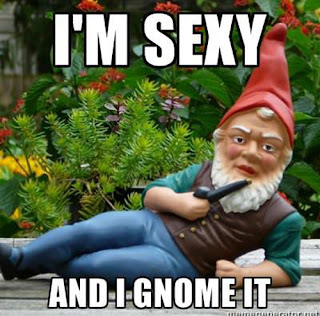 8:10 AM. Day 296 457 of my imprisonment in this stone form. Pretty much the same as yesterday. Just the odd variation on the weather. Who could have imagined eight hundred plus years would go by so slowly? 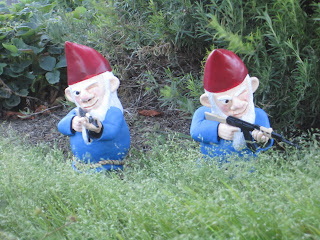 8:25 AM. I find myself musing on how angry that witch had to have been to curse me like this. I often muse on that. It's not as if I can actually do anything else. How was I supposed to know she might take my jeering personally? I mean, after all, I was Prince Rupert. My friends and I jeered everyone who didn't fit in. How was I supposed to know the next woman I'd insult would end up casting a spell turning me into a gnome figurine? Doomed to be inanimate, staring out at the world around me for all time and unable to say a word? 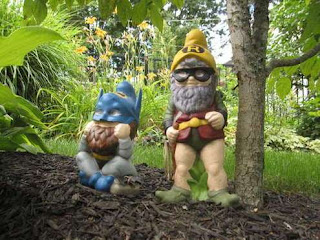 9:47 AM. The people who bought me five years ago are spending the day at home. I can hear the television inside their residence. I imagine listening to enough of regular people speaking has allowed me to keep up with changes in language structure. Otherwise I might still be thinking in thirteenth century terms. I imagine forsooth has gone quite out of fashion. You never hear it being used anymore. 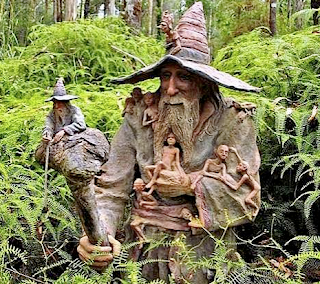 10:05 AM. Back in my day, we had town criers to yell at people if there was some critical bit of information they needed to know. Now we get television anchors. I hear more of them than I see them... I can just see a glimpse of that infernal device's screen from here. I wonder what powers it. At any rate, these people are rather dimwitted. They're paying attention to something called Fox. In my day, we hunted a fox. Not relied on it for critical information. 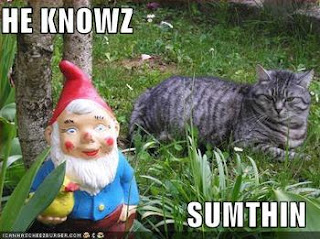 It's no use. None at all. In these hundreds of years, none who have possessed me have been able to grasp that I am not merely a garden gnome, but a human being trapped forever in this form.

They were all dimwits. 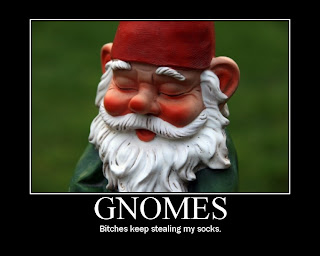 10:50 AM. Watching the lady of the house trimming the rose bush. She might be a dimwit, but she's a fetching dimwit. She has quite lovely thighs. Back in my day...

Can't think like that. Over eight hundred years without fornication has me frustrated enough. 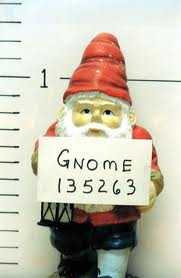 11:05 AM. I can't help but look at her. She reminds me of the Duchess Carlotta... oh, now she was quite a lovely one. And so very bold in closed quarters too... A shame the Duke walked in on us that one time.... 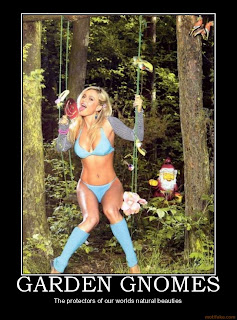 12:10 PM. I suspect the pink flamingo and the stone St. Francis statue are plotting against me. I see the way they look at me when they think I`m not paying attention... 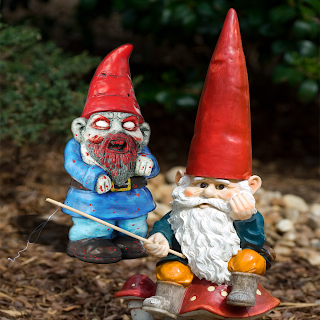 2:10 PM. The dimwits are departing. I can hear that vehicle of theirs starting up out front. I wish they'd take me along for the drive. The only change of view I get is when they move me out of the shed in the spring and back inside for the winter. I want to see something aside from the usual. 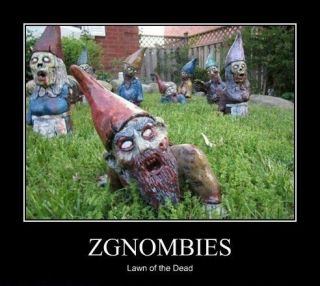 3:15 PM. A stray dog has wandered into the yard. Of course you can't hear me, hound, but at least you're breaking up the routine of the day for me. 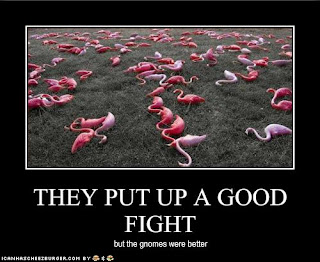 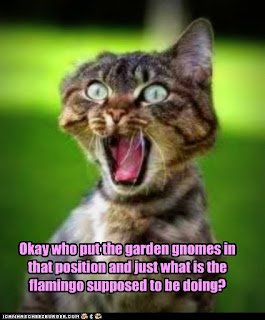 3:17 PM. I have never been so humiliated in all my centuries in this form. That foul hound has relieved his bladder on me. Back in my day, we'd have you in the stocks, and then drawn and quartered!

Come back here! I wasn't done yelling at you yet!!! 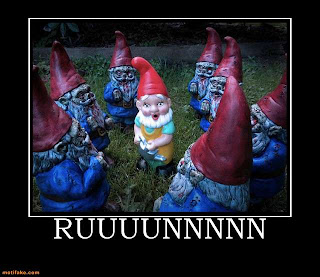 3:19 PM. What I wouldn't give right now for a good downpour from the heavens. Something to wash this smell away. If the dimwits don't water their lawn for a few days, I'll have to put up with it.

This is a travesty! 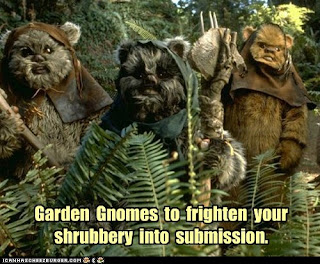 5:15 PM. The dimwits are back home. They're sitting out on the patio, drinking ice tea. I don't suppose one of you could turn the sprinklers on, would you? Just a thought. 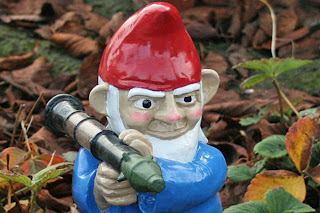 5:25 PM. They're barbecuing some delicious meat. I miss food. Almost as much as I miss fornicating. 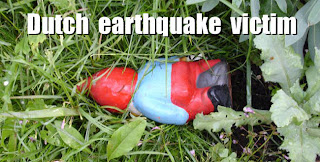 5:45 PM. A neighbourhood cat is wandering through the yard, walking towards the man of the house. Otherwise known as Mr. Dimwit. No doubt drawn by the smell of cooking meat. I swear, if that feline relieves itself on me... 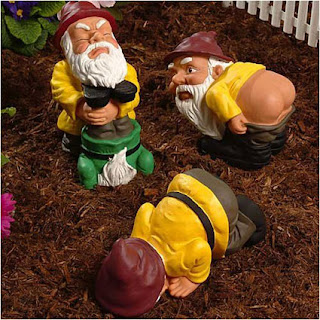 5:47 PM. Mr. Dimwit gives the cat a bit of meat. You do realize that cat doesn't look like it's starving, don't you? 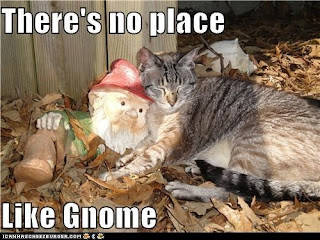 Then she hisses at me.

Hey! Do you know I'm something other than a garden gnome, or do you do that with any garishly decorated lawn ornament? 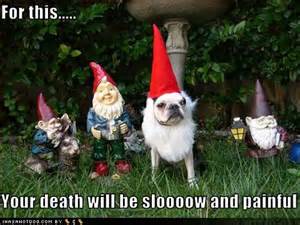 5:52 PM. It's no use. The cat has left the yard. I'll never know if she understands my true nature or is merely being a cat. 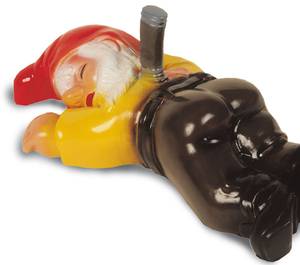 6:10 PM. Mr. and Mrs. Dimwit are having their grilled dinner out on the patio. Has it ever dawned on you that it's cruel to eat in front of anyone who hasn't had a proper meal in eight hundred years?

7:30 PM. Finally! A downpour has begun. I can at least get the scent of dog urine off me. Yes, blessed heavens, pour down that rain right on me. And if you don't mind, send a bolt of lightning to kill that accursed dog. 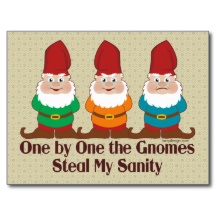 8:45 PM. It's remarkable what an hour's rain will do to lift the spirits of a humiliated garden gnome.

Hmmm, Mr. and Mrs. Dimwit are coming outside. It would appear they're going to take a dip in the pool. 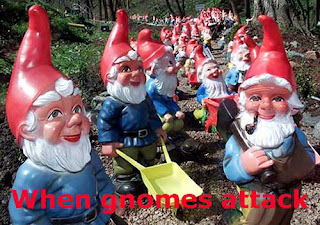 8:55 PM. They really aren't swimming much. Instead they've removed what little swimming attire they were wearing, in favour of no clothing at all. And they are presently engaged in some rather intense fornication in the shallow end of the pool.

Take your mind off it. Think of something else, Prince Rupert. Think of that old crone Sister Mathilda, who once warned me I'd get what was coming to me.

How was I supposed to know she was right? 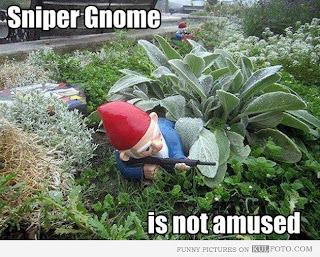 9:45 PM. They're finally finished with their fornications in the pool, and going back inside.

I don't imagine telling the ghost of that witch that I'm sorry would help? 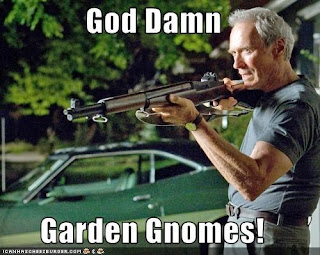 3:10 AM. Knocked over by a nocturnal visitor, a raccoon that regularly raids the trash container and digs in the yard for roots.

You, sir, are a thief and a scoundrel, and if I had my way, I'd be kicking you from one side of this yard to another.

Now come back here, I say! Come back, I'm not through ranting.

Sigh. How many more centuries am I to spend like this? Until the end of time?

All for laughing at a witch's wart????

Posted by William Kendall at 10:37 AM