A Day In The Life Of Vladimir Putin

Before getting started today, some business to see to. Our final Authors For Oklahoma blog is up, both at Blogger and over at Wordpress. Head on over to either page, check the last three sets of books out, and look back at the previous blogs. We'll be raffling them off for donations being made to the Red Cross for Moore, Oklahoma, and the instructions can be found at the bottom of the blogs for our Crowdrise link. Also check out Shelly's blog where her dogs have stuff for you to tweet about Authors For Oklahoma. It's a good cause, so spread the word!

Now then.... one more Day In The Life blog until I move onto other things.... and it might well be that I'll get in a lot of trouble for this one. 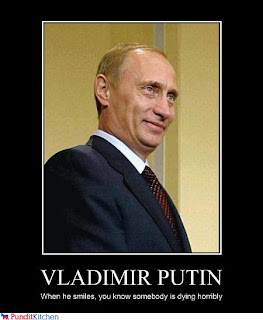 7:05 AM. Awakened by alarm clock. Sitting up right in bed. Much to do this day. Laws to have passed. "Accidents" to arrange for adversaries. Overseeing plans for the Death Ray 3000 Device. So much to do, so little time. 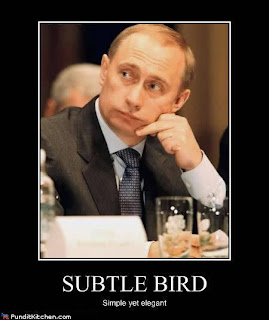 7:25 AM. After the usual morning shower in ice cold water (very handy to wake one up), time for breakfast while reading paper. Eggs Benedict and ham with strong coffee. It seems the editor of this paper believes I am doing a sterling job as the president and should be given expanded powers. Good, very good. Sometimes a little fear and intimidation go a long way. 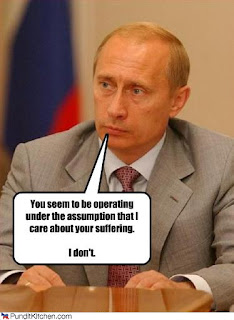 8:10 AM. Arrival at Kremlin. Everyone defers to me as I pass. Being the man in charge has its perks. Among them, people are terrified of me.

Greeting my staff as I come into my inner offices with a characteristic grunt and scowl. One assistant brings me the schedule for the day. So much to do, so little time.... 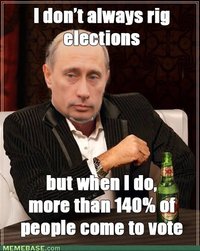 8:40 AM. Hard at work planning next incursion into Chechnya. Must divert world attention from humanitarian violations. Note to self: see if Lindsay Lohan will provide a distraction again while I make war on innocent civilians. 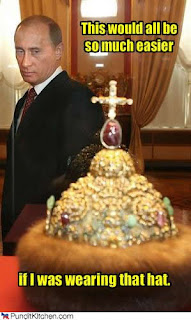 9:25 AM. Examining plans for the Sochi Olympics. The athletes and spectators of the world might not appreciate the song that I've had commissioned for them to sing during the opening ceremonies. Still, I think the title All Hail Tsar Vladimir, He's The Greatest has a dignified, modest ring to it... 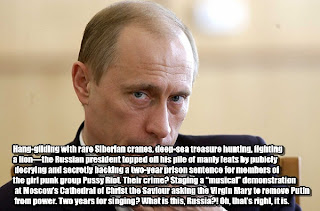 10:05 AM. Placing a call to a judge. Having an extra fifty years added onto the sentences for the members of Pussy Riot. Disparage my good name from inside prison, will they? I'll have to teach them some manners. 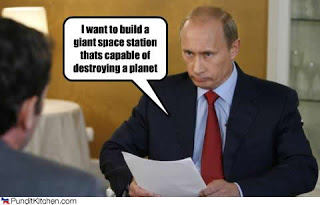 11:15 AM. Having morning meeting with oil tycoon Zaitsev. For some reason he doesn't want to sign over his holdings to me.

Note to self: have Zaitsev meet with an accident. Or a poisoning. Or whatever latest trick we have in mind for people who don't do what I tell them to do. 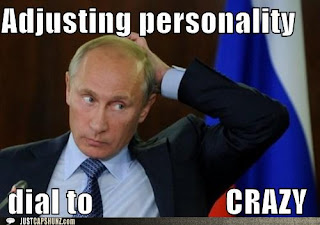 12:10 PM. Lunch with the Prime Minister. We discuss urgent matters. Price of vodka. Status of nuclear reduction talks. Why the winner of the Miss Russia pageant looks like a babushka only three weeks after her victory. 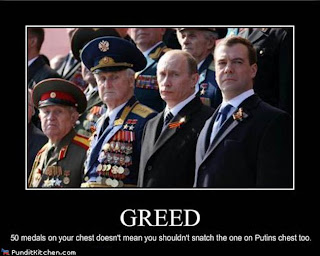 1:25 PM. Sitting down with Alexi, who handles my discreet special operations as required. Bringing up the matter of Zaitsev. Alexi assures me he can see to it that Zaitsev meets with a tragic accident. Advises me to look concerned for the cameras when the news gets revealed.

Shake hands with Alexi. He's the best at what he does, after all. 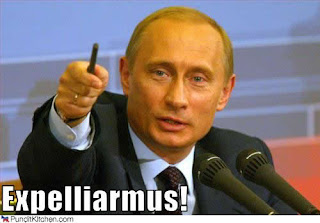 2:10 PM. Phone conference with the American President. He sounds tired, but it's just morning there. And he sounds annoyed. My holding onto that Mr. Snowden will do that. Which reminds me, have another conversation with Edward. Glean as much information as we can before turning him loose.

Da, da, Mr. President, I know you're frustrated. And really, I am trying not to laugh. 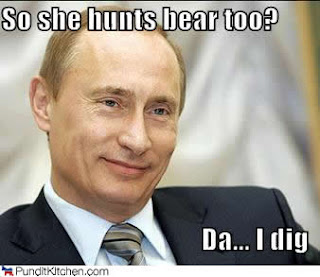 3:05 PM. Time booked aside, no interruptions, not even if we're starting a war. I lock my office door, and open up my desk drawer. There sits my teddy bear, Nicolai. I pick him up and hug him. It is all I can do to remind myself that, after all, I am still a human being. 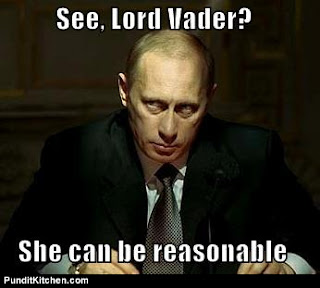 3:25 PM. Nicolai goes back into the desk after some cuddling and one sided conversation. Time to get back to work, Vladimir. 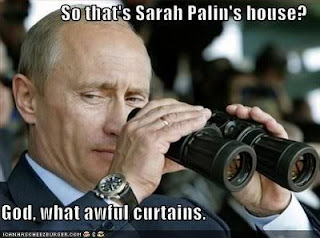 3:55 PM. Out on Kremlin grounds to do a PR stunt for the press. It has been too long since I have done one of these, and every once in awhile, the people need to be reminded how brave a leader I am. A big Russian bear is brought out into the courtyard. I take off my suit jacket and dress shirt. Time to teach that bear some manners. 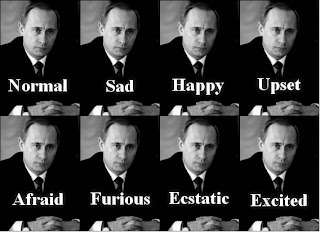 4:00 PM. I have easily dispatched the bear and made him submit. He is taken away in defeat to mend his aches and pains. I went easy on him. After all, he did agree to take a dive. In exchange for a good supply of blueberries and fish. Yes, good bear, very good. You made me look good in front of the cameras. 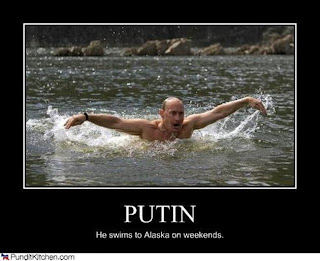 4:05 PM. Heading back to office. I certainly hope no one ever finds out I rig half of these photo op stunts in my favour. People would start to lose respect, after all... 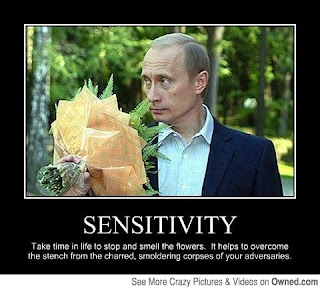 4:20 PM. Message from Alexi. Coded words, but he informs me that the Zaitsev situation will be resolved later today. 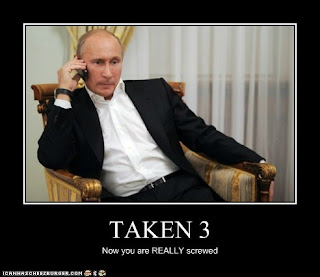 4:50 PM. Chatting with the ambassador from Iran. He assures me that the new President is just as much of a crackpot as the last one. Excellent, excellent. Every once in awhile I need a good distraction, and a lunatic in Tehran makes for a very good distraction. 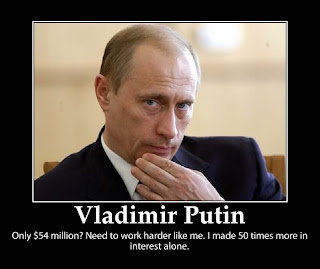 5:10 PM. Making arrangements to ship arms to the leadership in Syria for their war against the rebels. And just to make things interesting, I'll send some more arms to the rebels. See what we can do about keeping that war going a little longer.

6:35 PM. Conferring with Interior Minister over dinner. Interrupted by assistant. News breaking that I must know about. It seems Zaitsev's body has been found. After mysteriously falling out of a plane and crashing into a dacha west of St. Petersburg.

Alexi, Alexi, Alexi... I don't know if you succeeded marvelously or failed spectacularly. 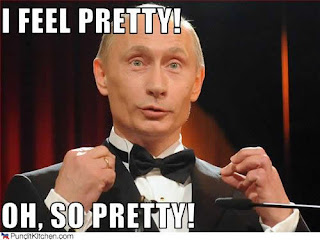 7:00 PM. Making a statement to press about the high profile death of Zaitsev. Making a point of looking very sombre. Not a problem for me. If those fools in the press only knew... 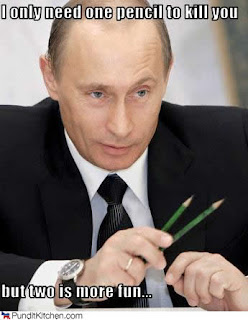 7:25 PM. Word comes of Zaitsev's amended will leaving his many holdings to the Russian people. Excellent, excellent. Just as I wanted. I wonder if Alexi got Zaitsev to sign off on it, or if he forged the whole thing.

I might have to promote Alexi. Minister In Charge Of Justice sounds about right. 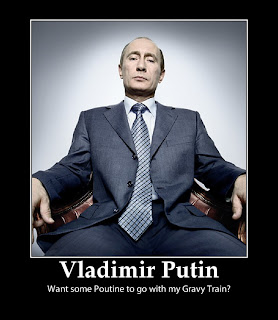 8:25 PM. Watching press conference. Zaitsev's widow Katya seems shocked. Whether or not it's by her husband's unfortunate death or the fact that he left every ruble to the country is uncertain. 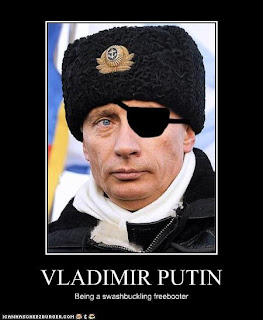 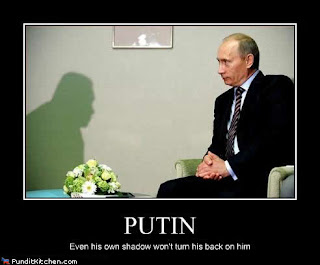 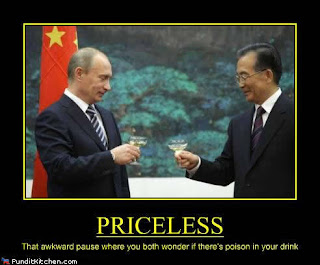 11:15 PM. Late nightcap. A glass of vodka to celebrate a good day. An oil empire worth billions now nationalized into my control. Oh, and the tragic accidental death of Zaitsev. And I actually got away with it. 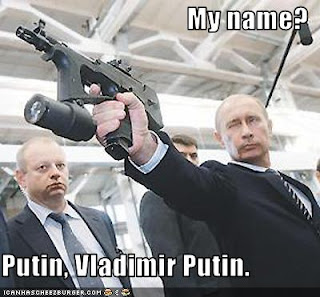 12:05 AM. Time for bed. Much to do tomorrow. There will be official duties and sombre looks about the death of Zaitsev. Not to mention another day of taunting the American President without actually being too overt about it.

Life is good. I don`t imagine this will ever come back to haunt me. 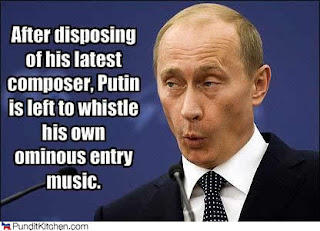 Posted by William Kendall at 6:35 PM

Email ThisBlogThis!Share to TwitterShare to FacebookShare to Pinterest
Labels: a day in the life, Russia, Vladimir Putin