Jebediah Sure Would Taste Better With Some Good Honey Mustard

Two orders of business today, before I get started. First, I direct you to Sacred Ground, where I did a blog with Lyn about Quebec City. Check it out, and comment, let us know what you think. That's assuming the current issues with Blogger comments sorts itself out fast.

Second, in recent days, this blog passed one hundred thousand views. This still astonishes me. You see, for the longest time when I was growing up, I was so used to being the odd one out. Knowing that for some reason this blog seems to get a lot of traffic both pleases me and confuses me to no end.

Now, to the mayhem at hand, and it occurs to me that this blog might have done well to be written for Sacred Ground, given the subject matter. A word of warning: if your ancestors took part in certain taboo activities implied by the blog title, either as a diner or as a meal, you might want to avoid this one...
I have a long fascination with the history of the American West. Contrary to the simplicity of most television and film Westerns, the real story of the West is an infinitely complex web of stories where things are not black and white, where you find moments that can make you proud, alongside other moments that horrify you or make you feel great shame. The history of the West is one of people, and of place. It’s a story that crosses geo-political boundaries; the story of the Canadian West has some unusual parallels and differences to the American experience. 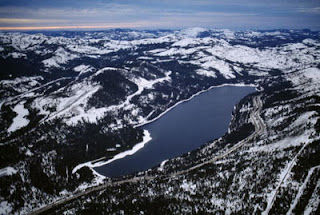 In 1846, the U.S.- Mexican War began, drawing American forces down into the Southwest and directly into Mexican territory. When it was done two years later, Mexico had lost much of its territory, which would one day become states in the Union of their own right, and an army of exceptional young officers had tasted combat and learned lessons that would come back on their own home ground thirteen years later as they turned to war against each other. Mexico would never really recover from the war.
Early on in the war, California itself was taken by American forces, and by the end of the first year was secured. A wave of pioneers began moving west towards California, following trails already being used by Americans to travel to a place that was not yet their own even before the war. In May of 1846, one such wagon train of pioneers, consisting of over eighty people, started out from Missouri for the proverbial promised land. That group came to be known as the Donner Party.


The journey across the continent in those days was one that would routinely take months. One wrong decision, or a delay, could be deadly. Wagon trains routinely fell apart at the time because of disagreements. There was always the potential threat of hostile natives. More to the point, the land itself and the bad judgment of the people in a wagon train could be unforgiving. Such was the case with the Donner Party, and it led to them occupying a rather... infamous place in American history.

The wagon train took a route through Utah and Nevada, thought to be a faster route. They intended to be in the warmth of California by September. Instead, the route had never been tested; the man who actually promoted it had never done the route with wagons. It passed through the unforgiving Wasatch Mountains and Great Salt Lake Desert. The route slowed the train considerably, and required far more work than other routes would have. Animals were weakened by the strain. An elderly man disappeared, and was never seen again. Tensions built among the members of the train, which finally reached the Sierra Nevada by October, quickly becoming snowbound in the high Sierra in the area around Truckee Lake.
The tensions in the group had caused serious rifts; James Reed, a member of the group, had been driven out after a fight ended in the death of another man and forced to ride ahead alone into California. In retrospect, he was unbelievably lucky. Tempers had been badly frayed during the journey, and the group had splintered into small groups, each distrustful of the other. The nominal leader of the group, George Donner, had enough difficulties trying to keep things together. 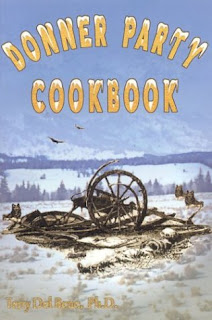 The Sierra Nevada is a hard place, even today. To get caught out in it during the winter, unprepared and without enough supply, can be a death sentence. The range includes many peaks over twelve thousand feet, and is an entirely unforgiving place. The Donner Party managed to take shelter in rudimentary cabins around the area, built by people who had passed through the Truckee Lake area some years before. Attempts to go further west- or to come east from the handful of party members who safely made it into California early- met with failure as the snows set in. The Party set into their encampments for the winter, just hoping to survive.

Food stores quickly began to run low. More animals died of starvation and cold. Teams sent to try to find help were swallowed up by the mountains, dying of exposure and cold. Of one such team, it is known that cannibalism of the dead took place. Among the main camps, people began to die of starvation. Madness set in among some of the families. Cannibalism set in among some of the survivors, feeding off the dead. Exactly how much is unknown; during the winter, three relief parties managed to breach the area and find survivors, as well as mutilated remains. Survivors tended to refrain from admitting that they ate of the dead, primarily out of shame. Regardless, what happened that winter would serve as a reminder of the unforgiving power of nature, and of how badly society itself can splinter under pressure. 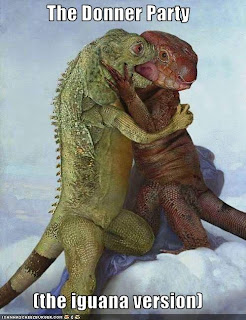 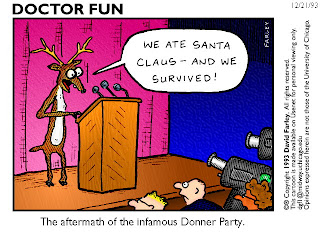 Of the eighty seven people who ended up encamping in the area over the winter, forty eight survived. Only two families remained intact.  For years afterwards, remains and bones were being discovered by passing parties, and buried. Personal items were destroyed. The ordeal left profound wounds among the survivors, deep animosities that would last a lifetime. The stories were embellished, to the point where it’s hard to tell where the truth lies and where the exaggeration or the cover-up begins. 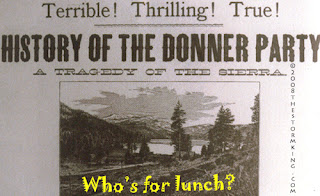 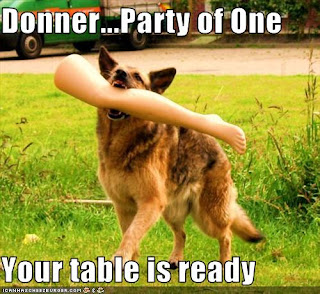 Today the areas where the tragedy took place are preserved as a state park. Truckee Lake has been renamed Donner Lake. The Donner Memorial sees thousands of visitors in a year. The last member of the party died in 1935. And the Sierra Nevada remains an unforgiving place. The story of the Donner Party is relatively minor in the greater story of the West, but the tragic aspect of it still draws us back to it. It isn’t a story of heroism or villainy. It’s one of the brutal, harsh reality of the West, a hard lesson that the land can turn on you, that one bad decision can destroy you. Too many failed to heed that lesson in the years that followed, and even today, the lesson still applies.


Oh, and Jebediah probably didn’t taste all that good, even if they’d had honey mustard. Just saying. 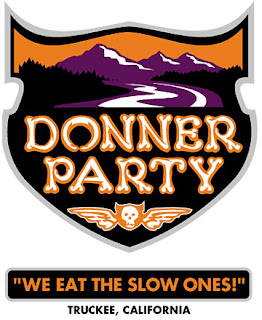 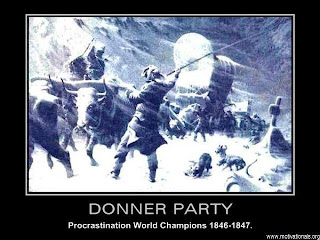 Posted by William Kendall at 10:11 AM