The Rampage Of A Fired Sitcom Celebrity 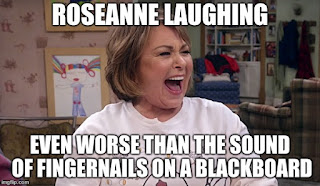 Los Angeles (AP). The fallout of the cancellation of Roseanne Barr’s show after a racist tweet continues, with things going in different directions on multiple fronts. The turbulence-loving star, who was summarily fired by ABC after her remarks against a former Obama adviser, has spent time lashing out at other cast members of the Roseanne update who expressed disappointment in her. Barr and her supporters have been busy feeding into conspiracy theories. From the White House, Donald Trump has been busy lashing out at ABC and demanding why he hasn’t been apologized to as opposed to doing his job. Others have been wondering why the woman with the world’s most obnoxious laugh just won’t go away. 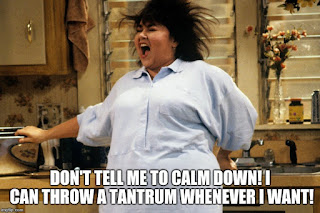 There have been suggestions about how to salvage the show, at the very least to give the cast and the crew a continued source of work, particularly given the high ratings that the update has been having. It was removed from the schedule in the wake of the controversy, as were syndicated reruns of the original series on other stations. “It’s been done before,” an ABC network executive admitted, speaking on condition of anonymity. “Valerie Harper left her show, and the show went on without her. When Charlie Sheen lost his mind and got fired off Two And A Half Men, the show retooled and went on without him. The network is still open to exploring possibilities about saving the show. Just not with Roseanne involved in any capacity, because between you and me and the network, she’s nuts.” 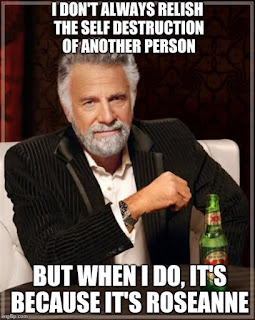 The scenarios suggested have varied. Picking up the series a couple of years later with Dan Conner a widower, and Roseanne’s name never mentioned again is one idea. Another notion picks up threads from the Dallas series or the finale of the sitcom Newhart, with dreams being a central concept. Producer Bruce Helford confirmed that there are ideas being bounced around about salvaging the series. 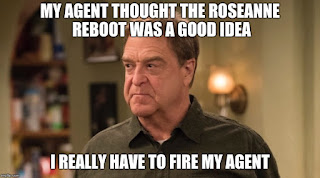 “One of the more amusing ideas is that we start an episode with Dan waking up in bed in the middle of the night in a cold sweat,” Helford told reporters yesterday. “Sits up straight and yells out, ‘honey, I had a horrible dream! I was married to the world’s most obnoxious woman for years on end and she just wouldn’t stop cackling that awful laugh and spewing conspiracy theories and being a bitter….’ And then his wife sits up in bed. And of course instead of Roseanne, it’s her sister Jackie, but in this reboot of the show, Jackie’s an only child, has no sister, and she and Dan have been happily married for thirty years.” 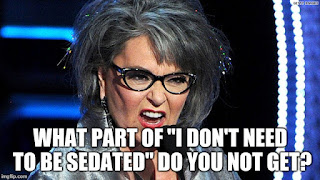 “**** that!” Roseanne Barr bellowed in an unsolicited call to Fox & Friends during their Monday morning broadcast, slurring her words at times and using colourful vocabulary, leaving one wondering if she was mixing meds with booze again. “They can’t take the characters I created, the show I ****ing created, and wipe me out of the show! I’ll never ****ing let them! I’d rather burn the ****ing set down! Scorched ****ing earth, you ****ing ****ers!” 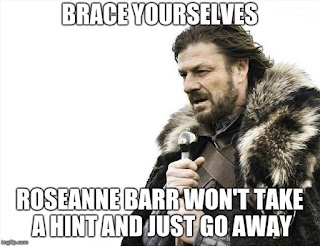 Her ex-husband, Tom Arnold, once seen as an opportunistic, untalented snake when he leeched onto the show during its first run for a time, has had a few things to say on the matter, mostly in interviews with the networks. “She’s bipolar, okay?” he said on CNN last night. “She doesn’t handle stress well, and she craves attention. The best thing you can do right about now is just ignore her. Meanwhile, how about in the reboot, we have my character come back as a used car salesman and comic relief?” 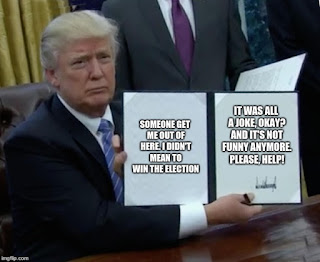 As noted, the issue has made waves around the White House. Roseanne’s character was written as a Trump supporter in the revisited series, and the tensions between she and other family members over politics was a subplot in the series. This has elicited sympathy out of Trump, who has been vocal in support of the actress and using the matter to further his own grudges. 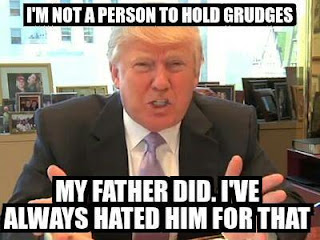 On Monday evening he made an announcement to the press at the White House. Instead of addressing matters such as the impending G7 meeting where he’ll be quite unwelcome, or the on and off North Korea summit, or the fact that he’s going out of his way to alienate and irritate allies, the President chose to focus on a matter that he found more pressing. “The way Roseanne Barr has been treated is very unfair! Unfair! Very unfair bigly! They fired her for something that doesn’t really matter, because she’s a fan of me, and I’m a fan of her. Big time! And those crooked networks, that mainstream media that hates me, they’re never gonna let her back in. They’re never gonna apologize to her or to me. So I have decided, as my job gives me absolute power to do whatever the **** I want, to screw over those ****ing networks by doing something different.” 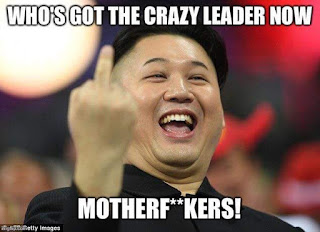 Trump smiled in that leering smirk way of his, and continued. “I’m giving Roseanne a job. An important job. A big job in a prestigious place. Because she’s one of the best people. And I only hire the best people. You know that, I know that, everyone knows that. Now I could be making her my chief of staff, and who knows, maybe I will. I mean, that ****er Kelly is gonna be on his way out any day soon now, and I’ll tell you, I’m sick and tired of that mother****er telling me I gotta control myself. Control myself? I’m in control, I’m the best at being in control, believe me, folks.” 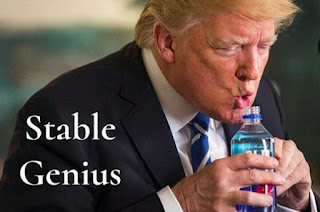 The orange tinted chief executive paused a moment, as if trying to keep track of what he was saying. “Where was I? Oh yes, the job. Now I want to give Roseanne the right kind of job. Something that requires tact and grace and all that bullshit. Something important. I thought diplomacy. In an important place. But I can’t make her an ambassador, at least not yet. She doesn’t have the experience, and besides, where I’m sending her, the ambassador’s a close personal friend of mine who donated to my campaign. So instead I’m giving her a chance to build up some experience in the field. I’m making her the official communications director for our embassy in Great Britain. Isn’t that covfefe great?”

The press corps was in a state of stunned silence for a moment, until someone spoke up. “Have you lost your mind?” 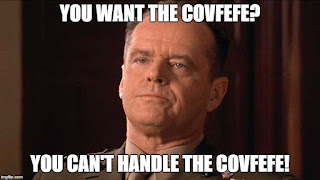 “Shut the **** up!” Trump answered. “She’s gonna be great in the job, tellin’ those stuffy Brits what’s what and who’s for. She’s gonna pave the way for my first official state visit to Old England, Scotland, whatever the ****, I mean, who cares about what the ****ing difference is between the British Brits. English, Scottish, it’s all the same. So where was I? Oh yes, state visit! We’re talking me shaking hands with that old battleaxe Lizzie, tellin’ her to put a big Trump Casino sign up at that Burpingham Palace place, because let’s face it, that place needs a bit of Trump class. We’re talking me giving a big speech for the ages to their worthless little parliament and telling those stuffy mother****ers who's in charge. And they’d better ****ing show me some ****ing respect, and apologize to my buddy Vladimir for that whole ****ing overreaction to that spy being poisoned thing. Now, no more questions, I gotta get busy on this afternoon’s ****ing tweet rampage before I give an official ****ing pardon to the corpse of Charles ****ing Manson.” With that, Trump stormed out of the press room. 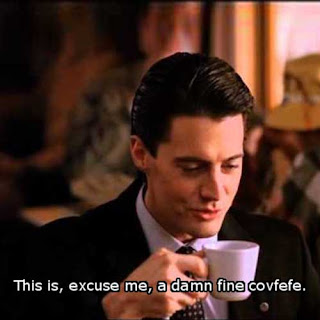 Needless to say, the British are not amused. Prime Minister May, busy trying to wrangle some kind of solution out of the Brexit fiasco, was displeased by the statement. A formal statement from Ten Downing Street indicated that the American President is not welcome on British soil. Another statement from Buckingham Palace noted, “the Royal Family is not obliged to receive someone incapable of tact and respectful behavior, neither in the capacity of an embassy staffer or a head of state. It is recommended to the current occupant of the Oval Office that should he visit Britain at any point during or after his presidency, Her Majesty has the Tower of London at her disposal, and while it is largely a tourist attraction, the infrastructure for its old uses as a prison are still in place, and she sees no problem with detaining, quote, an insufferable lout, end quote, for a few weeks.” 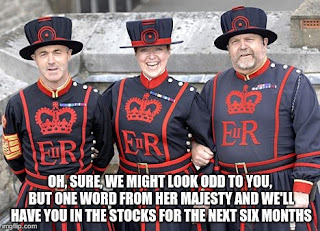 When the statement reached the White House, Trump’s latest Twitter storm was magnified ten times worse, and Chief of Staff John Kelly has reportedly told military officers not to let the President near the nuclear codes. “What the hell was I thinking,” he said to reporters last night outside the West Wing. “Taking this job? Did I lose control of my faculties for a moment? Say, do the networks have any job openings coming up for former White House staffers as pundits? Because I could use a less stressful job right about now.” 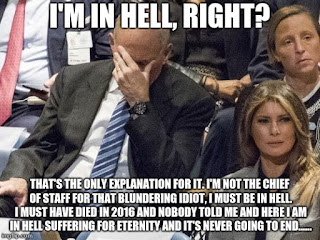