The Art Of The Jewel Robbery 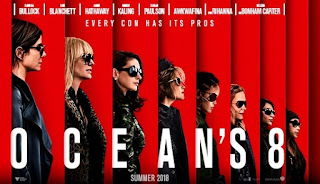 “All right, here we go. Don’t sleep. Don’t sleep, because you might disappear.” ~ Constance

“Taylor Swift? Can’t we just go to this? Do we have to steal stuff?” ~ Amita

“In three and a half weeks, the Met will be hosting its annual ball, and we are going to rob it.” ~ Debbie 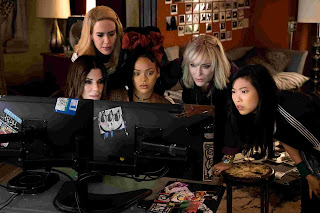 It’s been a few years since the Ocean’s trilogy from director Steven Soderbergh, and now a follow up has hit theatres. The original gang led by George Clooney’s suave Danny Ocean aren’t involved this time out (though there are cameo appearances by a couple of them). Gary Ross has replaced Soderbergh at the helm for Ocean’s Eight, but the concept follows through on the franchise- a group of likable anti-hero crooks aim to pull an audacious heist. This time the gang are all made up of women, and the cast clearly is having a whole lot of fun in what turns out to be a playful addition to the caper genre of film. 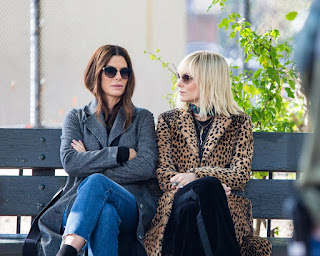 We meet Debbie Ocean (Sandra Bullock), the estranged sister of Danny Ocean, who’s spent over five years in prison before making parole. Reunited with one of her old partners in crime, Lou (Cate Blanchett), she has a heist in mind. And she has a score to settle with Claude Becker (Richard Armitage), her ex who happened to be the reason she ended up in prison. Debbie and Lou recruit a group of women to carry out a daring heist of an insanely pricy necklace during the Met Gala, one being worn by actress Daphne Kluger (Anne Hathaway). Like brother like sister it seems for Debbie Ocean, and of course there are going to be complications along the way.

Soderbergh said after his trilogy was done that there would not be an Ocean’s Fourteen, particularly following the death of Bernie Mac, part of the crew of thieves in the trilogy. The idea of a follow up with a cast of women was floated about, however, gaining steam some years ago with a script in development from Gary Ross and Olivia Milch. Their story fits the tone of the earlier films- a breezy, fun energy, a group of likable crooks with different personalities and idiosyncrasies, a preposterous plan for a heist, a target who deserved getting robbed, and the carrying out of the crime. 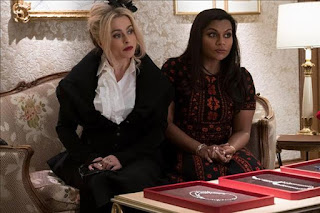 As before, the film paces itself well, in a charming and stylish way, with a wealth of cameos (this being a fashion gala, some of those cameos are more welcome than others), but all in all, the tone of the story has the same smooth, funny energy of the earlier films. Ocean’s Eight isn’t quite at the level of Ocean’s Eleven, but it does well on its own merits. It doesn’t make the mistakes of the Ghostbusters reboot- first, this doesn’t feel like a supplanting of the original film, which outraged the socially demented fanboys, and second, the cast doesn’t include Melissa McCarthy, which was my objection to that reboot. Nor does the story seek to replace the earlier cast, but to take things on its own terms. It helps that these women aren’t portrayed as bickering with each other, at least not seriously, something you wouldn’t see in other films, and the story adds in twists and turns along the way that are refreshing and fun. 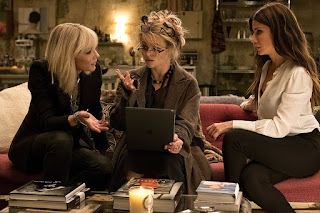 Ross as a director is a good choice for the film. He’s written or directed (or both) in a diverse set of films- Seabiscuit, Pleasantville, Dave, The Hunger Games, Big, Mr. Baseball. That’s an impressive resume, and his previous work shows he understands the emphasis of strong characterization and working with actors, as opposed to being the sort of director (Michael Bay, I’m looking at you) who relies on pyrotechnics and quick cut edits. That reflects itself in how he paces the film, and how it’s shot. The emphasis is on the characters, and everything else is in support of that. Yes, making use of the Met Gala, what to most normal people is an insanely over the top self-congratulatory bit of nonsense from the fashion industry, might in other hands overwhelm the story, but that doesn’t happen with the way Ross handles his direction. He gives us the sleight of hand we expect out of the genre, keeps track of the heist as it’s planned and as it unfolds, but always keeps us with the characters instead of lost in the crowd. 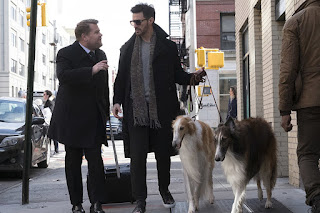 Casting was well done all around. Richard Armitage, who spent three films as Thorin Oakenshield in The Hobbit, plays a considerably less likable type here as Claude Becker, an art dealer. He was involved with Debbie before her time in prison, but screwed her over and got her sent away for fraud while he cheerfully walked. And so it’s understandable that Debbie might like a bit of payback against him. Armitage gives the character the requisite bit of charm that glosses over the sleazy, disreputable truth of who he is, ending up as the film’s highly unsympathetic antagonist. Late night host and occasional actor James Corden has a fun role as Frazier, an insurance fraud investigator who has his own suspicions about the group of women. 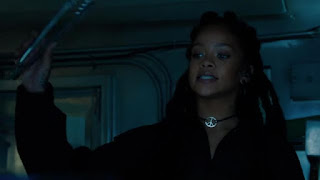 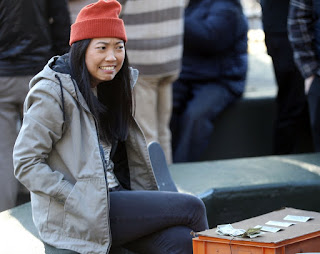 Rihanna as a musician isn’t to my taste, and the last time I saw her acting was in the cinematic catastrophe Battleship, in which she seemed completely out of place (but to be fair, nobody came out of that film looking well). She gets a different part, and one that suits her better, as Nine Ball (not her real name), a computer hacker and tech genius (because a heist film requires one of them). She fits the role well, giving the character a snarky, wiseass energy. Another musician taking time out to act in this one is the rapper Awkwafina (definitely a stage name), who gets her share of the film’s humour as Constance, a street hustler and thief who’s good with the sleight of hand trick. Her character has more of that snarky quality, along with a streetwise sensibility and a hunger for more. I liked what she did with the performance. 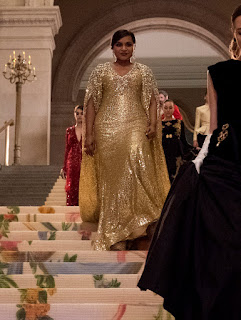 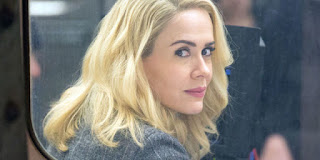 Mindy Kaling, who’s done a lot of television work in particular, is new to me with this film, but I’ve been familiar with her name. She gives the role of Amita a fun, exasperated take. The character is a jewelry maker who lives with her overbearing mother (a character in and of herself). The idea of making enough money on a heist and getting away from her mother holds a certain appeal, and the actress makes her likable and someone we can sympathize with. Sarah Paulson is one of those actresses you’ve seen in many television and film projects, both comedy and drama, most recently a supporting role in The Post. She might seem initially serious- and many of her roles have required her to be- but here she gets a character who’s a sly sort with a twinkle in her eye, particularly as she gets deeper into the heist. She plays Tammy, a suburban mother who has worked with Debbie before on crimes, and is still something of a crook even in suburbia. Her Tammy, seemingly peaceful (but bored out of her mind) with suburban life, comes to life with the idea of going after a heist, and the actress seems to be having a blast playing the part, which comes across through the film. 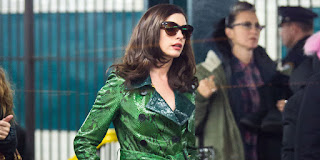 For whatever reason, Anne Hathaway has been the subject of a lot of online hostility (I don’t get it, but that’s me). Whatever is said about her personality in general, she seems to be taking that and putting it into her character with a lot of self-referencing and poking fun at her reputation. Daphne is the target of the heist- or to be more exact the necklace she’s to wear at the gala is the target, seemingly a self absorbed actress who craves attention, but there’s more to what makes her, and Hathaway ends up gleefully stealing scenes and comes across as enjoying herself. 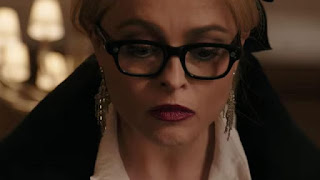 Helena Bonham Carter is always a joy to watch in a film, with such a rich variety of roles throughout her career. Often they’re eccentric; some are unsympathetic, while others evoke empathy. Here it’s the latter, as she plays Rose, a somewhat nervous, withdrawn, and worrying fashion designer who is part of the heist. She’s far more human than the fashion icons we seen in various cameos during the film (a very good thing), and a bit hesitant to step into a life of crime, but vital to the plan. She really comes into her own, though, as a member of the team, shifting from worrisome to boldness (with a hint of worry), and it’s a treat to watch the actress bring out different nuances to the character. 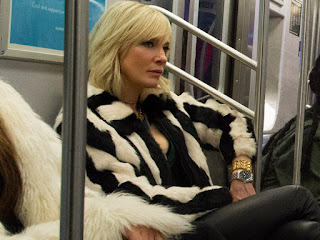 Cate Blanchett is another actress who’s always compelling to watch, and she’s clearly having fun as Lou, Debbie’s partner in crime from before prison and the first person recruited into the heist. Lou has worked with Debbie before, and they’ve got complicated history with each other. They’ve also got trust and know that they can rely on each other. Her take on the character is a smooth, calm in the face of obstacles, and level headed sort- with the right touch of sarcasm and wit. You can’t help but like the character, even if you’re compelled to check your pocket for your wallet anytime she’s around. 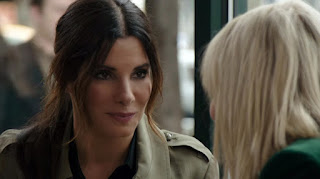 Sandra Bullock has the right touch in the lead role as Debbie Ocean. She brings some of the same steady, affable charm that Clooney invested in Danny Ocean, and some of the same amused disregard for the rules. The actress has an innate likability, and so when we learn the circumstances of how she ended up in prison, we’re both rooting for her and wanting to see the comeuppance of the man who put her in that situation. Bullock also plays her role as the sort of person who other crooks will follow into a high stakes plan, and the right touches of humanity throughout her performance. And she happens to have great chemistry with Cate Blanchett, which plays out through the film. It helps that she seems to be having fun the whole time.

Ocean’s Eight turns out to be a worthy successor to what’s come before, a breezy and fun caper film with a fine ensemble of likable crooks among the characters, and a thoroughly unredeemable jerk in the mix. The actresses come across as though they were thoroughly enjoying themselves during production, and it shows. Director Gary Ross paces the story well, giving it an energetic, light tone in all the right places, and the final result is a treat to watch. 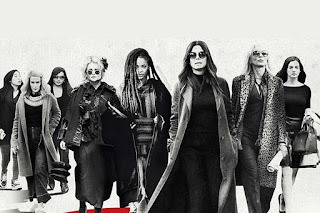