A Pleasant Excursion To The Island 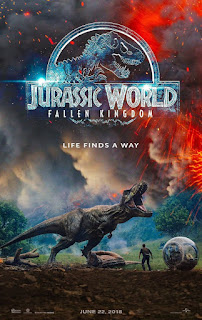 “These creatures were here before us. And if we’re not careful, they’re going to be here after. Life cannot be contained. Life breaks free. Life… finds a way.” ~ Ian Malcolm

“The man who proved raptors can follow orders. You never thought how many millions a trained predator might be worth?” ~ Eli Mills

“Do you remember the first time you saw a dinosaur? First time you see them, it’s like… a miracle. You read about them in books,  you see the bones in museums, but you don’t really… believe it. They’re like myths. And then you see… the first one alive.” ~ Claire Dearing

“If I don’t make it back, remember, you’re the one who made me come here.” ~ Owen Grady 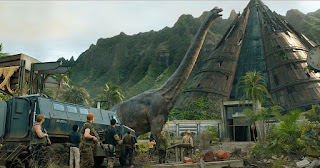 The fifth film in the Jurassic Park franchise, and the second in a planned Jurassic World trilogy, has hit theatres. The film series, about science stepping over a moral line in resurrecting dinosaurs through cloning, has been a thrill ride ever since, weaving between reptilian terror and the ethical question of where the line between right and wrong is. Jurassic World: Fallen Kingdom reunites the stars of the previous film for another round of dinosaur mayhem, while bringing in a fresh director to handle the project.

Three years after the events of the previous film, Senate hearings are underway, as the abandoned Isla Nublar is facing impending destruction because of volcanic activity, and the question remains- should the dinosaurs be rescued? Ian Malcolm (Jeff Goldblum, reprising his role) feels that nature is correcting the mistake made in cloning the animals. Claire Dearing (Bryce Dallas Howard), former operations chief at Jurassic World, has founded a group called the Dinosaur Protection Group and is advocating saving the animals. She is contacted by Benjamin Lockwood (James Cromwell) and his assistant Eli Mills (Rafe Spall); Lockwood was once partners with the late John Hammond, and offers a new island as a sanctuary for the animals. Claire must bring in Owen Grady (Chris Pratt), the former raptor wrangler, to aid in the efforts to save the dinosaurs. It doesn’t take long for volcanic eruptions and hidden agendas to assert themselves.

Director Colin Trevorrow took writing duties this time out, due to return for a final film in the trilogy as director. The story, crafted with Derek Connolly, who worked with Trevorrow and others on Jurassic World, continues the tradition of the franchise’s mixing of wonder, terror, and the ethical debate of science. It’s familiar ground by now, this being the fifth film of the series, and while it might seem dinosaurs living in the present might well have lost their sense of wonder by now, the story still maintains the tension and dread when things go inevitably wrong (as they always seem to do when you’ve got a plan involving dinosaurs). 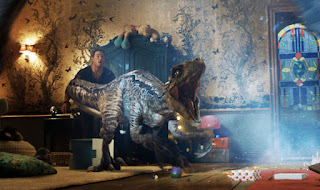 Trevorrow and Connolly’s script not only works off that tension, but it uses the characters to frame that ethical debate. Just because we can do something, does that mean we should? Some of the characters are quite firm in their moral code on the matter, while others only see their own ambitions, driven by their own greed and self-interest. Those are qualities that often come back to haunt the individual in these films, and that certainly applies here. One might even say it’s a statement at the state of the world today. 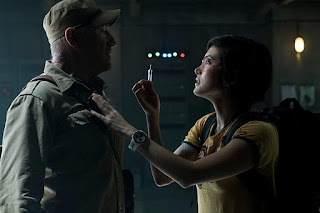 Spanish director J.A. Bayona has come on board to helm this film. He would best be known to American audiences for his disaster film The Impossible, and some of his work at home includes horror. He has the experience then for something on this scale, an epic that still grounds itself in its characters. The CGI mix of dinosaurs with locations has already been well established in the franchise; the animals have a real look that makes them blend seamlessly in with everything else. We are a long way past the stilted awkwardness of Ray Harryhausen effects, and this franchise has been a big part of that push forward. Bayona paces the film well, with the first half coming across as a disaster film before weaving into what feels like a haunted house scenario with the second half. 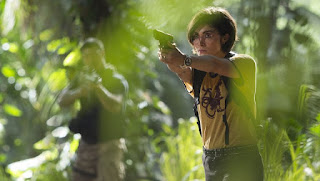 The cast is diversely chosen, some returning from previous films, others new to the franchise. B.D. Wong has previously appeared as the geneticist Doctor Wu, the man most responsible for the cloning of dinosaurs in the first film. The actor plays the role as cold, clinical, detached, and amoral, a scientist who’s more concerned with his ego and his accomplishments than the wisdom of whether or not something should be carried out. Justice Smith makes his debut as Franklin Webb, a computer technician for the old theme park who’s become a specialist for the Dinosaur Protection Group. He is brought in on the endeavor, and the actor gets some of the comic relief of the story. Daniela Pineda plays the capable Zia Rodriguez, a former Marine who’s become a paleoveterinarian for the group. She’s tough and resourceful, and the actress plays to that in her performance. Isabella Sermon appears as the pre-required kid (there's always a kid in these films) in peril- Maisie Lockwood, granddaughter of the benefactor, and keeps her cards close to the proverbial vest in her performance, as there is more to her than meets the eye. 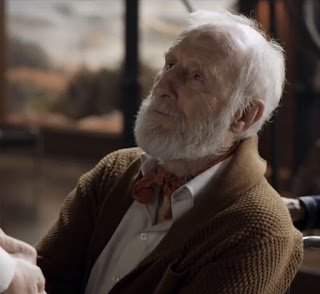 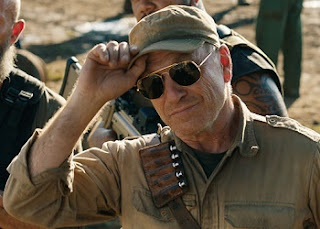 Rafe Spall is an English actor, the son of Timothy Spall, and he’s done work in television and film on both sides of the Atlantic. He gets to play the villain this time out, the ambitious executive with plans of his own and little in the way of ethics. Seemingly pleasant at first, he’s of the sort who keeps his agenda hidden and his malice concealed, but it’s there. The character seems to think he’s doing the right thing, which is an interesting angle in a movie. James Cromwell, the well-known character actor, appears as Benjamin Lockwood, a former associate of John Hammond who’s seemingly benevolent in his intentions, but hides secrets of his own and ignores the dark side of his associates. Cromwell has played both good and bad people before- this is a mix of both elements. Ted Levine, who's played many a nasty person in his career, gets to chew the scenery as the mercenary team leader Wheatley, throwing his weight around and serving the interests of his employer. And Toby Jones, the character actor, plays an unscrupulous auctioneer.

Jeff Goldblum, who appeared in the first two films of the franchise, isn’t as heavily involved this time out, but is still a welcome sight to see (perhaps Sam Neill might reprise his Alan Grant one more time?). Ian Malcolm is of course a chaos theory academic with some personal experience with dinosaurs from the first two films, and Goldblum’s take is much the same. Ian is older now, but still as charming, still as irreverent, and still as principled- he draws a line in the sand, adheres to an ethical code, and expresses most strongly the moral dilemma of the story.

Bryce Dallas Howard has already played Claire Dearing in Jurassic World, and returns with the character in a very different place. She has gone from being operations manager in a dinosaur theme park with all the responsibilities therein to seeing that all come apart in the previous film. The character has learned lessons from that, and changed her world view, heading a group dedicated to protecting the animals. She plays Claire as sympathetic, having had taken hard lessons to heart, and become more of a principled person because of it. 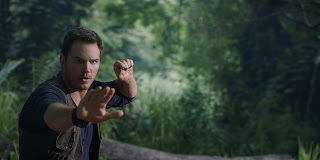 Chris Pratt returns as the affable, capable Owen Grady, once a trainer to the velociraptors in the theme park. Having had managed to establish a working relationship with the predators, the experience also taught Owen respect for their nature, and it’s that previous relationship that drives him to join the rescue effort. Pratt plays the character with a combination of laid back humour at times, focused dedication at others, but always resourceful. He and Howard have an easy going chemistry that builds on their character’s established histories, and the two make for likable leads. 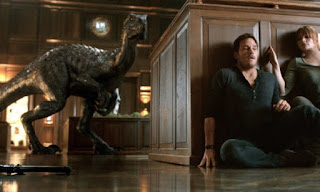 Jurassic World: Fallen Kingdom appears to be the second to last of the franchise, with one more film coming. It certainly leaves things off in a way that points to the future of the films, though I do think the studio would be wise to leave it at that afterwards. We’ve gotten ourselves so used to the wonder of the dinosaurs brought back to life onscreen that it all seems quite familiar. The film maintains that ethical debate of the morality of generating life without heeding the consequences, framing that debate with the terror of plans gone terribly wrong and the mayhem of dinosaurs on the loose. All in all, it’s an entertaining new chapter for the series. 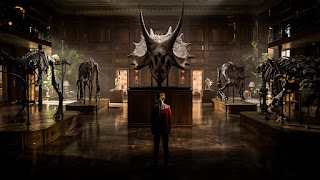