Requiem For A Drunken Sailor 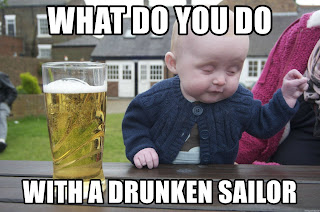 Boston (Reuters) In life, he was larger than life, a one eyed barely comprehensible man of the sea with overly developed muscles, a corn cob pipe, and a bizarre taste for one of agriculture’s more noxious vegetables. For nearly ninety years, his presence made itself known in popular culture, while he himself, and those around him, never aged beyond a set point in time. He presented himself as ill-mannered and not terribly well educated, and he shared a tempestuous on and off relationship with a peculiar sort of woman. All while regularly brawling with anyone crossing his path.

Popeye The Sailor Man is dead. 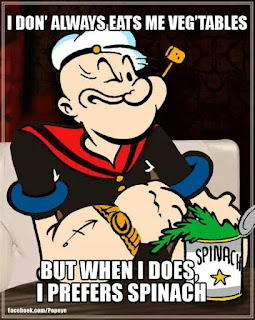 Whatever his real name is, it was long since lost to history. The sailor steamrolled into the popular culture in 1929, finding himself portrayed in comic strips, animated shorts, and even a dubious film. A brawling, spinach eating, garble-speaking tough guy known to break the arms of others in arm wrestling contests, he was over the top, cranky, possessive of superhuman strength and given to losing his temper with acquaintances and perceived rivals. For all his ferocity, Popeye (no last name given) was prone to going out of his way to please his significant other, one Olive Oyl. 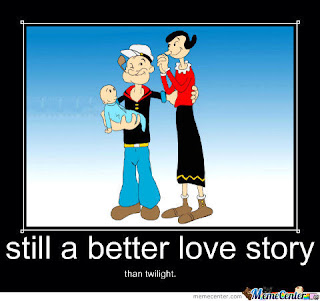 “They had what in current parlance would be called a meet-cute sort of moment,” early twentieth century pop culture historian Geoffrey Willington noted. “Popeye and Olive hated each other at first. And you know how that goes. First they can’t stand each other, then they’re having at each other in the fun way. Happens all the time. I mean, half of Hollywood’s romantic comedies work that way. But there were times Olive was known to have a fickle eye, sometimes drawn to a rival suitor, sometimes irritated by his poor manners. After all, Popeye was what he was. A sailor, and sailors aren’t known to be the most suited to high society.” 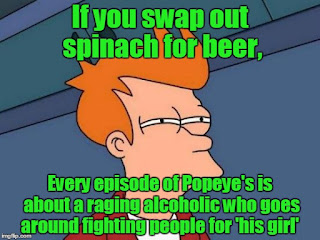 “I yam what I yam!” Popeye once bellowed as the keynote speaker for a gathering of the Daughters Of The Revolution. In a 1973 speech that is still remembered by the social group for its incoherence and paranoid rantings, the sailor spent an hour raving about freemasons, the price of spinach, the planet Nibiru, and the inability of hamburger eating moochers to pay him back. He was never invited back, and the group cautioned other historical societies against taking him on as a celebrity guest speaker. 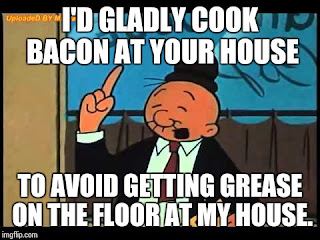 “They say not to speak ill of the dead,” longtime acquaintance and professional moocher J. Wellington Wimpy told reporters. “But honestly, Popeye was a drunk. A full blown alcoholic with a mean streak. He was even worse than that cobbler who always wished death on me. No, Popeye was the sort of person who would go beyond wishes and hopes. He would beat me up for not paying him back for that burger he bought me last week. And he’d do it while laughing at me. Which reminds me, I’ll gladly pay you Tuesday for a burger today.” 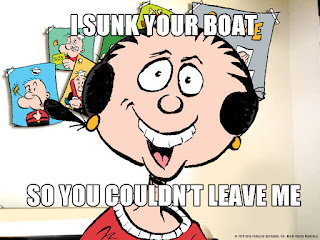 “Oh, he wasn’t all that bad,” Popeye’s paramour Olive Oyl told reporters at her home, dressed in black as befits a widow, softly weeping. “Of course he had a temper. But whenever he got angry, he never took it out on me, never took it out on Swee’Pea. No, he had Bluto or someone else to throttle. Oh, sure, sometimes he’d throttle the wrong person, like that time he gave President Roosevelt a black eye. But Popeye said that he thought that FDR was going to run him over with the wheelchair, so that made everything okay. Turns out the Secret Service didn’t agree. That’s beside the point. With us, he was gentle and sweet and kind. Even if he could be kind of hard to understand at times. I’m going to miss the big lug. Even if he never got around to putting a wedding ring on my finger.” 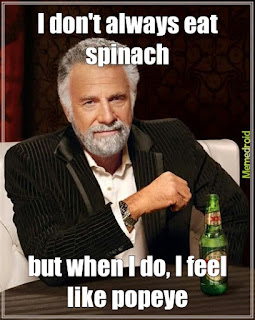 Swee’Pea refers to the perpetual infant who was often in the care of Popeye and Olive. It has never been made clear who the child is, let alone his real name. Whether he was biologically related to or adopted by either Popeye or Olive has always gone unaddressed. Until now. “There’s a big problem with being a cartoon character,” Swee’Pea told reporters from his nursery at the Oyl home. “I’m over eighty years old, and here I am, still a baby, still supposed to go around talking as if I’m a baby, still wearing diapers, still going by a stupid nickname. Well that’s not my name! My name is Richard Winslow Hollingsworth the Third! I’ve been on the lam hiding out from my family for eighty years. I didn’t want anything to do with the Hollingsworth tobacco fortune. Which, in retrospect, I now regret. I mean, I could be a millionaire right now making big bucks off people dying of lung cancer, and instead here I am toddling around in diapers.” 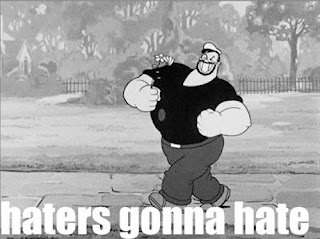 “He was a lout,” longtime rival and fishing captain Bluto told reporters. “A jerk. A thug. A bully. A deranged jackass. Good riddance to him.” The oversized, bearded mountain of a man was known to occasionally kidnap Olive Oyl to win her affections, only to be promptly beaten up by Popeye. “No, that was just the plotlines of the strips and the film shorts we did,” Bluto clarified. “I never kidnapped Olive. You think I’d be the sort of guy who’d commit a crime? That doesn’t change the fact that Popeye was what he was. A brute who’d beat you up just because he woke up on the wrong side of the bed. Now I’m a big guy, a strong guy, but he was stronger.” 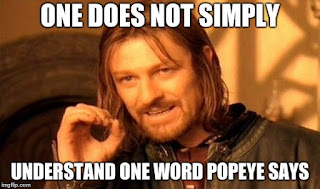 Popeye’s vaunted strength was credited to his consumption of spinach- so much so that he was noted as the biggest single consumer of spinach on the planet. But there was a darker truth to his strength that has only now been revealed in the wake of his death. “Steroids,” Cape Cod police captain Wayne Davis confirmed to reporters. “His real strength came from steroids. We found stockpiles of them in his home in the wake of what happened. Well, it explains a lot.” 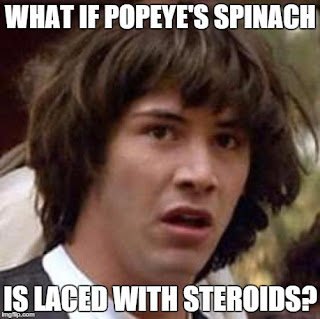 Popeye was at a local bar Saturday night in the midst of an arm wrestling contest with five men at once. Breaking all their arms by winning the contest, he stood upright, yelled in triumph and flexed his arms… and then it happened. His massive arm muscles, vastly over developed, seemed to burst, as witnesses reported. “We’re talking veins and arteries busting open,” a bartender confirmed. “It’s like those body builders who go way too far in developing their muscles, to the point where you wonder what’s holding those muscles together. Well, in this case, veins popped, the skin popped, his pipe went flying, and he collapsed in a heap, going back and forth between howling in pain and that weird laugh thing he did.” 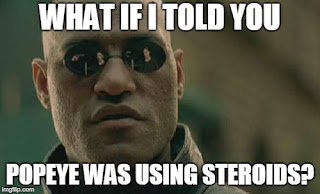 Medics were called, Popeye was taken to hospital, where doctors and nurses tried to save his life to no avail. “It seems that decades of steroid abuse had taken their toll on his heart,” Davis noted. “And his heart just couldn’t take it anymore.”

And so it is that an icon of pop culture has left the world’s stage. Popeye is no more. Funeral arrangements have been made. Bars around Cape Cod are determining if his tab had been paid in full. Spinach producers are wondering how to make up the gap that will surely show itself in their market. J. Wellington Wimpy is relieved that he won’t have to pay Popeye back for unpaid burgers. Bluto has been seen buying up flowers to court Olive Oyle. Richard Winslow Hollingsworth, formerly known as Swee’Pea, is making inquiries with doctors to see if he can start aging at a normal rate. And the sort of a widow Olive Oyl has been heard weeping from her parlour windows about her beloved drunken sailor, claiming, “I’ll never be able to look at another can of spinach again without bawling my eyes out!” 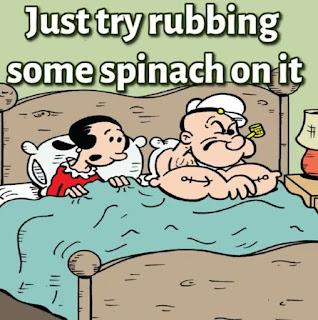