Curse Of The Demented Hockey Fans 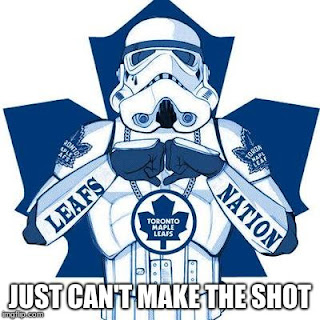 Toronto (CP) There are certain things in life that are guaranteed. Death. Taxes. And the Toronto Maple Leafs screwing up at the worst possible moment. Such is the case with the first round of the Stanley Cup playoffs, which saw the team face the Boston Bruins, a perpetual headache and source of bad memories for the team and their fans. The Bruins beat the Leafs in seven games, advancing onto the next round of the playoffs. 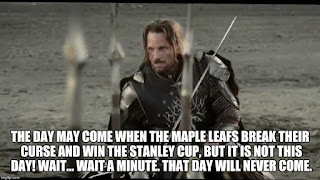 It’s fairly typical of the Bruins to make the playoffs most years. And most years it’s fairly typical of the Leafs to miss the playoffs. The last time these two teams met in the playoffs, it was the 2013 edition, and the hearts of fans of the Leafs were shattered in a traumatic game seven, which saw the team’s collapse in the third period, losing not only a lead in twenty minutes, but ultimately the game, which ended in an overtime victory and advancement for the Bruins and destroyed hopes for the Leafs. 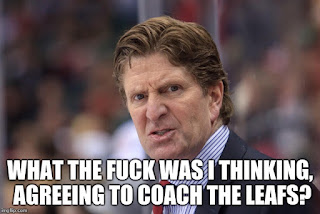 “I cannot understate the impact that had, emotionally speaking, on the fans,” psychologist Gareth Eddings said from his offices in Toronto. “Generations of people, emotionally invested in a team that has not won a Stanley Cup since 1967. A team that often has faltered, stumbled, or screwed up at the worst time. A team that has occasionally been wiped out of contention by December in bad years. And yet these generations of people have remained devoted. Almost as if it’s a cult. They’ve held out hope, insisting that this year had to be their year. They’ve pointed to teams like the Chicago Cubs, breaking that World Series curse, and insisted that must be a sign that their drought was at an end. That Game Seven was soul shattering and heart breaking. Well, if you’re a Leafs fan. I’m not. I’m possessed of a little common sense and know better. That said, I mean, it was quite a time for psychologists dealing with traumatized Leafs fans. Or bartenders, listening to the tears and sobs of fans at their bars.” 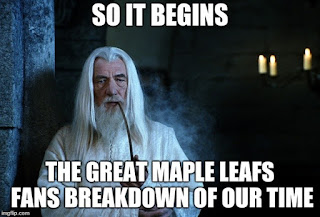 Will this latest drubbing have the same effect? “Not quite,” Eddings noted. “The 2013 series left even deeper scars than this one will. Leafs fans are going to hurting for quite awhile regardless. They’ll drink their way into oblivion for a few weeks, mope and complain and go through the five stages. Denial, anger, bargaining, depression, and finally acceptance. Some may find that process a lot harder to others. It may take longer to come to grips with it all for some of them. But, rest assured, they’ll be back. In October, they’ll be filling sports bars and the arenas, acting like their usual hooligan selves, insisting that this year is going to be their year. And never learning the basic lesson that no year will ever be their year.” 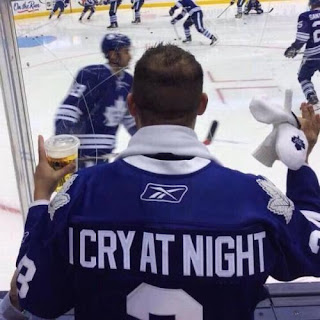 Early observation seems to suggest the first two stages are where most fans are at. When the last game ended and fans in sports bars across Leafs Nation realized their team was done, there were many scenes of agonized tears, refusal to accept the final results, and fist fights. “This can’t have happened again!” an unnamed fan said through his tears on what is already being described as Dark Wednesday in the halls of Leafs Nation. “It’s not fair! Not fair! That Cup ****ing belongs to us! It’s ours! It’s a whole big ****ing conspiracy, man! A conspiracy meant to keep the greatest ****ing team in the history of ****ing forever from getting’ what they ****ing deserve! Harry! Jack! Tell this ****er it’s a big ****ing conspiracy!” 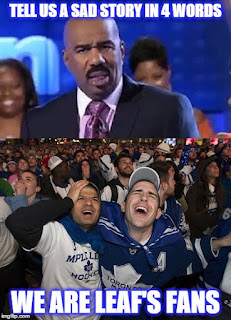 It is embarrassing, perhaps, to see grown adults weeping over what is merely a game, on their hands and knees, hollering and hitting the floor repeatedly, holding their breath until they pass out or get their own way. And yet that is the case in Leafs Nation right now, where decades of not winning the Cup have left hockey fans in a fragile state. “There is a term for it,” Eddings remarked. “MapleLeafitis Delusionitis. It’s a chronic condition, incurable, and unfortunately contagious. If children are exposed to Leafs games for two or three seasons, enough to follow in the footsteps of their parents in terms of enthusiasm, they’re stuck for life. They won’t be cured, and there will be no reasoning with them. Very sad. Very sad indeed. But quite good for my line of work.” 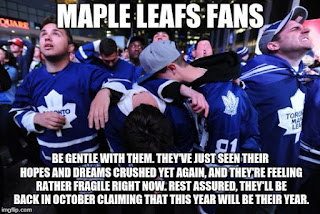 The team themselves are busy cleaning out their lockers, getting ready for playing golf. Most of them will be back next season. Some will not. “Well, what are you going to do?” Connor Brown, a right winger with the team told reporters while clearing out his locker. “It sucks. It’s going to take time for us to get our heads back together. There’s always next year, right?” He paused, seemed to be collecting his thoughts, and then added, “Dammit, I hate that phrase. There’s never going to be a next year with this team. Wait a minute, you didn’t just quote me on that, did you?” 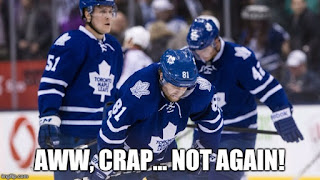 The last word belongs to a fan outside the arena while the team was wrapping things up inside. Tommy Malone has been a die-hard fan of the team for all of his fifty-eight years, and has seen good times and bad. “Mostly bad,” he admitted, apparently already being in the acceptance mode of the five stages. “Sure, right now it feels bad. It feels like we got hit. But life is about moving on, moving forward. And that means comin’ out and showin’ support to our boys, even in the face of losin’ that game. Because tomorrow is another day. And next season is another season. And next season, believe me… next season is going to be the year we take the Cup!  Leafs Nation! Wooooooooo! Go Leafs go! Go Leafs go!” 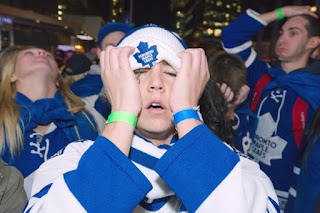