Requiem For A Clumsy Gungan

I have another eulogy today, this one of a more sci-fi vibe...

“Friends, we come together today to pay homage to the legacy of one of our most illustrious figures. He was unique among our peoples. He touched lives beyond our planet, in ways he didn’t intend to. He did things that he might not have seen the consequences of. Though to be fair, no one else did either. He was known for his boisterousness, for his unique way of saying things, for his devotion… and, well… for occasionally being clumsy.

We come today to say farewell to Jar Jar Binks. 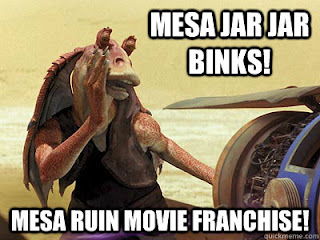 He was an unlikely sort to end up a representative for our Senate delegation in the Old Galactic Republic, and after the fall of the Empire, he never again sought to involve himself in such affairs. Perhaps it was guilt over one particular moment in his diplomatic career. Who can tell? But he was one of us. He was of the Gungans and he was of Naboo. And so our peoples must pay tribute to him.

Jar Jar was of the Gungans, but was at first exiled from his people before he stepped into history. Boss Nass had exiled him for clumsiness, and so he quietly made his life walking about Naboo, trying to stay out of trouble. Even if trouble came looking for him. 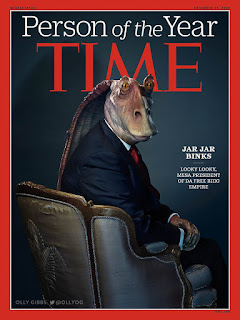 Those who knew him back then remember the happy go lucky Gungan that he was. Occasionally they would have to ask him to repeat himself, because, well, let’s face it, he could tend to be incoherent. Sure, he was clumsy at times, and sure, disaster seemed to follow in his wake, but he was affable about it.

And then along came that whole Trade Federation thing.

And those two Jedi. 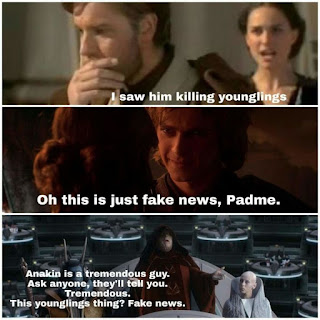 Jar Jar Binks found himself thrust into the forefront of history. Helping to defeat the droid armies. Helping to reconcile the Naboo and the Gungan people to come together as friends. Ending up a representative in our Senate delegation on Coruscant.

Little did anyone know at the time.

None of us could have known that Palpatine- one of our own- was a Sith Lord.

None of us could have understood that our own Senator, who became Chancellor, had been spending years on end pulling strings to put himself in power and create the Empire and rule it with an iron fist. 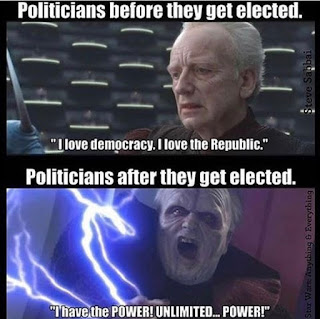 None of us could have realized that one day our own Jar Jar Binks would end up making a motion that gave Palpatine executive powers in a crisis. Those same powers that allowed him to forge his Empire.

You could say that was a pretty big mistake.

For whatever it was worth, after the Republic fell and the Empire rose and Jar Jar realized he had made a mistake, he was sorry. In his own words, mesa very sorry, okey dey? 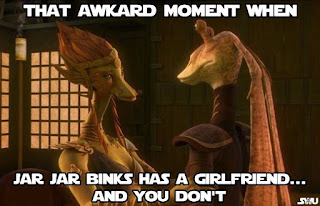 Time went on. The Rebellion rose up. Naboo tried to stay out of the way of everything. We had a collective shame of knowing that the galaxy’s most evil dictator came from our planet. Jar Jar stayed out of the way of history. Oh, sure, there was that time when he bumped into former chancellor Valorum and knocked him off the waterfalls. And sure, after the Empire fell and the new Republic rose, on a trip to Bespin he made one little mistake that ended with Cloud City crashing down into the planet below. But he was always sorry about being clumsy. And isn’t being sorry enough?

In retrospect, it’s surprising given how accident prone he was that he lived as long as he did. 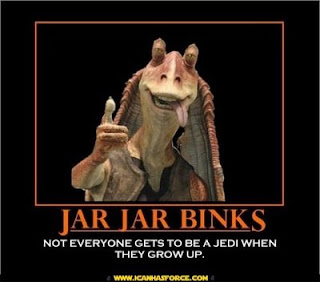 Boss Nass once told me that he always thought Jar Jar would have stumbled his way into a hyperdrive or trampled by a Bantha. It was something of a miracle that no one anonymously bludgeoned him during the Imperial era for his part of the rise of the Empire.

Well, all that is in the past.

All we can do is commit our late friend, Representative, and Senator… Jar Jar Binks to the ground.

At least what’s left of him. 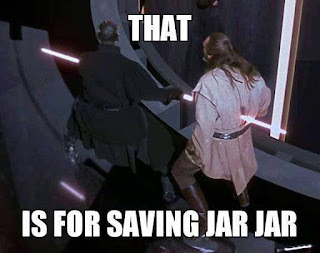 Who would have thought that in this day and age that the Hutts were still in business?

Well, the Hutts were never known for being polite. Or hospitable. Or merciful. Or patient.

Jar Jar might not have realized any of that.

He went back to Tatooine for old time’s sake. 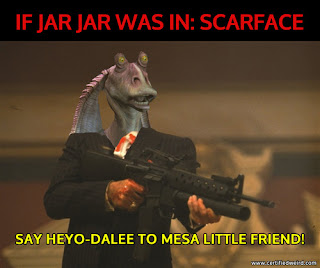 Was it nostalgia? Was it trying to figure out where it all went wrong?

What we do know is that he spilled his drink onto Grappa the Hutt at the pod races.

And after many attempts at apologizing, Grappa threw him into his own personal Rancor pit. 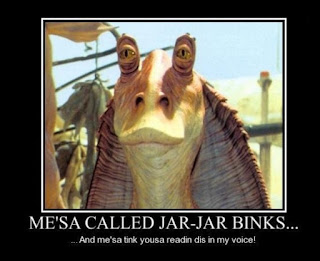 We’ll never know what was going through Jar Jar’s mind as that Rancor monster advanced on him. Maybe he was very, very sorry. Maybe he was trying to reason with it. Maybe he was yelling in panic and stumbling over both of his feet.

What Grappa did admit to is that Jar Jar’s last words were wesa be friends, okey dey?

And then he got his head bitten off. 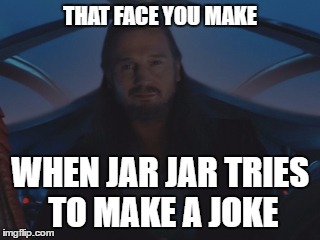 Even though we can all rest assured that you won’t end up breaking fragile vases in our homes anymore.

And don’t worry. None of us bear any grudge towards you over the whole making it possible for Palpatine to take over the galaxy thing.

Though Tala Valorum probably still hates you for knocking her grandfather off of the Naboo Falls." 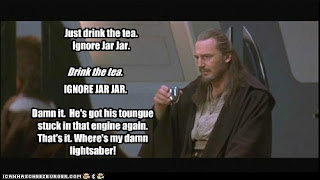