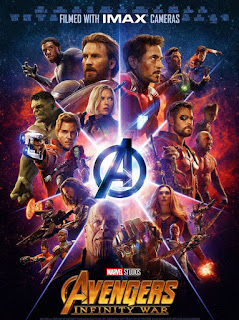 “You’re strong. But I could snap my fingers, and you would cease to exist.” ~ Thanos

“Death follows him like a shadow. That’s who Thanos is.” ~ Mantis

“We have one advantage. He’s coming to us. So that’s what we’ll use.” ~ Tony Stark

“The entire time I knew him, he only ever had one goal. To wipe out half the universe. If he gets all the Infinity Stones, he can do it with the snap of his fingers. Just like that.” ~ Gamora

“Today we don’t fight for any life. We fight for all of them.” ~ T’Challa 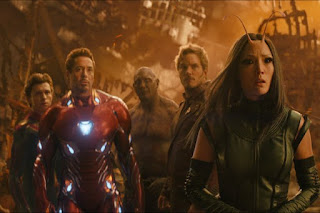 Avengers Infinity War has hit theatres in a big way, the latest in the string of films set in the Marvel Cinematic Universe. Director brothers Anthony and Joe Russo (Captain America: The Winter Soldier and Captain America: Civil War) take the reins for this chapter as well as next year’s follow up in a sprawling epic that adapts the Infinity Gauntlet storyline and brings together pretty much every character we’ve seen thus far in the Marvel cinematic universe to face one threat- lovable kid dinosaur Barney’s cranky brother Thanos. 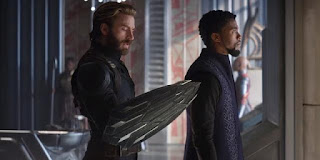 The story starts with Thanos (Josh Brolin) and his minions out in space, in the midst of a quest to capture the Infinity Stones- cosmic maguffins that have played a part already in the movies. That brings them to attack the ship bearing Thor (Chris Hemsworth), Bruce Banner (Mark Ruffalo), Loki (Tom Hiddleston, and the survivors we saw at the end of Thor Ragnarok. Things don’t go well, and our heroes are split in different directions, with Banner ending up back on earth to warn of things to come, while Thor encounters the motley space faring heroes calling themselves the Guardians of the Galaxy. It doesn’t take long for the rest of the Avengers, back on earth and split into two teams in the wake of Civil War, to realize they have to come together and take on the biggest threat to existence- a purple grouch coming right at them scheming to obliterate a good part of the cosmos. 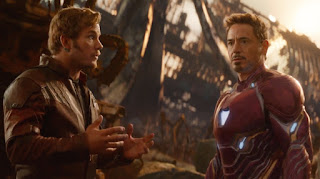 Christopher Markus and Stephen McFeely handle the script, a good touch, since they’re well established in the Marvel cinematic universe. They did the same with the three Captain America films, wrote the script for Thor The Dark World, and created the Agent Carter series. So by now they’re well versed in the Marvel world and the sprawling epics of heroes and villains. The story they’re telling here (and in next year’s follow up) is an adaptation of the classic event The Infinity Gauntlet, which had the perpetual villain Thanos scheme to wipe out half of life in the universe in a bid to impress Death. 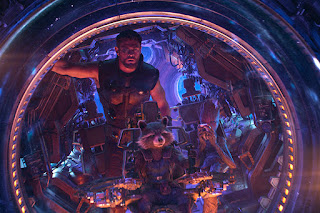 Here he has the same aims (via the use of the Infinity Stones) because he believes it’s the only way for the universe to survive, by a culling of the numbers. The screenplay follows that story, establishing Thanos as a force to be reckoned with, demonstrating his motivations, and then contrasting that sheer ambition with the desperate band of heroes from across the cosmos determined to stand in his way. As sprawling as the story is, their screenplay still grounds itself in the characters, in the dynamics between them and the history (some of it strained) that they share. 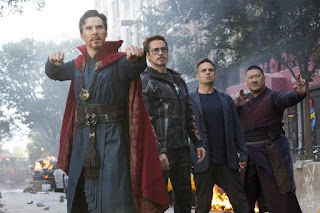 The Russo brothers, having had already worked in the Marvel cinematic universe on the two Captain America films, are well suited to direct such an epic. Civil War could be described as Avengers 2.5, given how many members of the team appeared in the film. Here they helm an action epic that takes the Marvel world a step further, giving us nearly every character in the established continuity. The action moves from place to place on Earth and out in the stars, but the brothers never let the spectacle and ferocity of the story overwhelm the characters. They pace the film well, giving the audience a thrilling, dazzling tale that plays to the gravity of the threat, while still allowing for humour here and there- banter between characters, how Groot interacts with pretty much everyone, for instance. The CGI and production values serve the story well, rendering Thanos and his associates as malevolent in their appearances as you would expect, giving us visions of other worlds, and building on what’s already been well established in the Marvel cinematic universe. 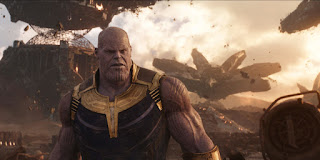 Thanos is arguably the most fearsome antagonist in the Marvel universe (albeit one who is occasionally capable of acting for the greater good). His shift to the cinematic world is a formidable one, showing him as a nihilistic, ambitious, ferocious enemy, one who thinks he’s doing the right thing- he seeks to re-balance the state of the universe. Josh Brolin plays the character in a combination of voice and motion capture, and gives the villain a chilling, malevolent energy throughout. His performance is a show stopper, and he makes the character utterly compelling to watch. 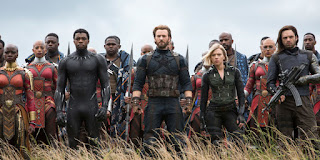 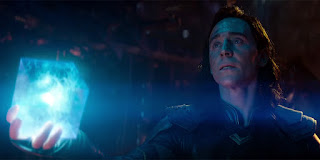 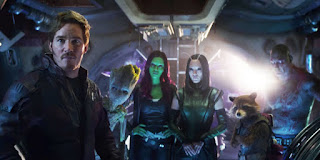 The heroes are all gathered against him, and have all been previously established in earlier films. Some of the actors get cameos in those roles, others more substantial work to do, but all of them are familiar with their parts and play to what they know. Chris Pratt, Zoe Saldana, Dave Bautista, Bradley Cooper, Pom Klementieff, Karen Gillan, and Vin Diesel reprise their Guardians roles as Peter Quill, Gamora, Drax, Rocket, Mantis, Nebula, and Groot, and they get a fair amount to do as their team winds up encountering the Avengers for the first time. Tom Hiddleston, who started out the villainous Loki, has shifted over time, ultimately fighting for the right cause in the last Thor film, and the actor continues to play to that here. 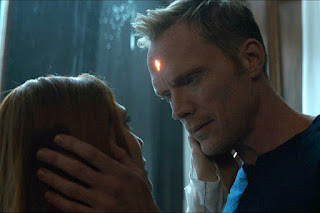 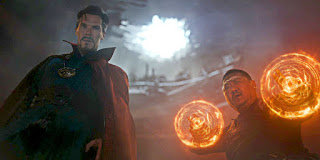 Don Cheadle, Paul Bettany, Elizabeth Olsen, Anthony Mackie, and Tom Holland reprise roles as James Rhodes, the Vision, the Scarlet Witch, the Falcon, and Spider-Man, each caught up in the grand sweep of the story, each reacting to it in ways that fit with their characters. Having had recently played the part in his solo film, Chadwick Boseman returns as T’Challa, the Black Panther, both as a king of his people and as a man facing a universal threat. Benedict Cumberbatch plays the same sort of division in his return as Doctor Strange- interacting more with the heroes of the Marvel universe against a common threat while also serving in his capacities as the sorcerer supreme of Earth. 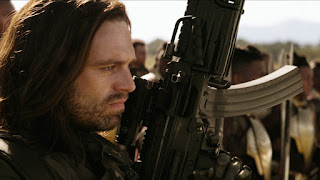 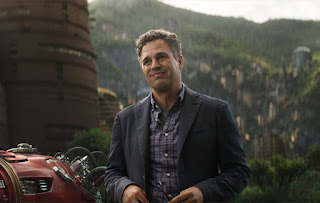 Sebastian Stan reprises his role as Bucky Barnes, having had already played the character starting in Captain America: The First Avenger. Since we last saw him, Wakandan scientists have been busy de-programming the brain washing that made him the Winter Soldier, and he’s taken on a new role and new responsibilities, but his loyalties and friendships remain as they were. Mark Ruffalo reprises his role as the tormented Bruce Banner, struggling to contain his inner monster as the Hulk, and face to face with a threat he feels even the Hulk can’t defeat. Scarlett Johansson returns as the Black Widow; the spy has faced some dark times since we last saw her, and there’s a harder side to her now, something the actress plays to. 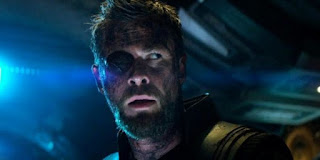 Chris Hemsworth picks up where the last Thor solo film left off, as king of Asgard- with events radically impacting on him as the story unfolds. He’s certainly motivated in where the story takes him, but I like how the actor rises to the occasion. Part of the film has him interacting with those he’s never met before- Rocket and Groot are particularly funny in how they relate to Thor- and Hemsworth’s take on the character is that of a man, a king, and a hero whose spirit drives him to keep moving forward, despite the seeming impossibility of what stands before him. 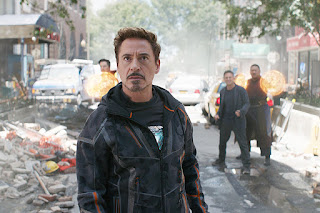 Robert Downey Jr. started out the entire Marvel cinematic universe as Tony Stark in Iron Man, and the character returns to form here. He’s the leader of one squad of Avengers, something of a mentor to the young Peter Parker, and an engaged man to the love of his life. And he’s a man with regrets- the schism that’s still in place with Steve Rogers as the story begins. Tony is still the genius, still capable of snark and irreverence, but that’s tempered in this story by the awareness he has of what’s coming, and what has to be done to stop it- if it can be stopped. Downey gives this performance the right touch of weighed down by the situation that it needs. 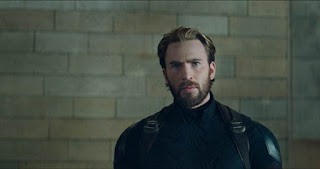 Chris Evans returns as Steve Rogers, a fugitive hero in exile who’s led a faction of fellow Avengers who agree with him. In the wake of Civil War, the character has found refuge in Wakanda, and is trying to come to terms with his place in the world- his responsibility to the world at large as well as to himself. There’s long standing friction and unresolved issues where Tony is concerned- the two have not parted on good terms- and the actor plays to that conflict. That said, Steve is a natural leader, the sort others will look to, and Evans continues to invest the character with that resolve and energy. 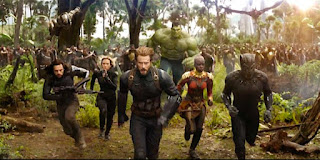 Avengers Infinity War is a sprawling epic action thriller that nonetheless manages to cater to the humanity and characterization of its major players. It gives us one hell of a villain, a thoroughly driven being who is astonishing to watch- all while one might expect him to mutter a version of Barney’s lines: “I hate you, you hate me, I’ll destroy the galaxy”. The film is but the first half of an adaptation, and where things leave off is the cliffhanger to end all cliffhangers. The next film is out in a year- and it can’t come soon enough. 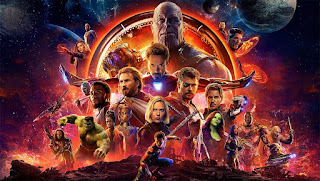