All Hail The Mighty Flaming Zeppelin 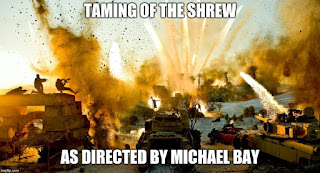 Los Angeles (AP) It can be said that sometimes an assignment is a punishment. When it comes to assignments made by cranky editors, every assignment is a punishment (editor: shut up!). Such was the case this week when this reporter was dispatched to the offices of Digital Domain in Hollywood for yet another announcement by the resident egomaniac otherwise known as Michael Bay. Joining other real reporters and a horde of slow witted entertainment reporters, this reporter wondered how long it might be before his cranky editor went into retirement, or in an ideal world got locked away in a place with padded walls for that whole anger management thing (editor: what did I just say about shutting up?) 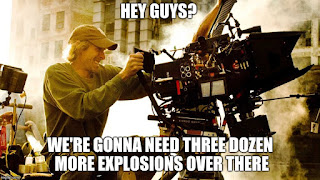 The assembled reporters and the dimwitted entertainment reporters gathered together in the facility’s auditorium. Real reporters were comparing notes as to why they had been stuck with this assignment (editor: you know precisely why!) while entertainment reporters speculated about the impending announcement, given how many film projects the director is already involved in. A spokesperson called for the attention of all. “Ladies and gentlemen,” she said. “Give it up for the greatest film auteur in the history of the universe….” The introduction went on for another ten minutes, heaping honours and esteem on a man who clearly didn’t deserve it, no matter what he might think or how much his staff might get paid to say such things. “Michael… Bay!” 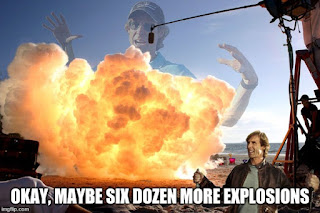 The director came out on stage, smiling and waving, basking in the applause of the entertainment reporters, oblivious to the eye rolls and sighs of dismay from real reporters. Bay strode to the podium, saw the full length mirror positioned there, and winked at himself, smiling again like the demented egomaniac that he is (editor: not one more word! Michael Bay is a great director!). He faced his audience. 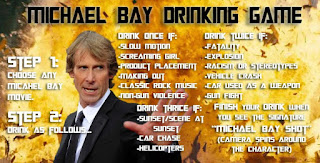 “Thank you for coming out today! It’s wonderful to see you!” Not so wonderful in the opinion of this reporter, who… (editor: I will find a way to get past that restraining order and strangle you) “You know, I am a busy man. I’ve got so many projects on the go that I don’t know when I’ll get them all done. But I had an idea the other day. Now you know I love disaster films. And epic deaths and fireballs and explosions and babes waxing cars and Aerosmith themes and more explosions. Now there’s a true story out there, one that… correct me if I’m wrong, hasn’t been done before on film. I’m talking about the Hindenburg disaster.” He broke out into a manic grin. The entertainment reporters broke out into applause. 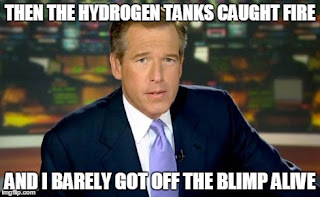 “Actually the Hindenburg’s been adapted before,” this reporter informed him.

Bay stared, and then shrugged. “Okay, but not by me. So, that’s what I’m going to do. I’m going to retell the epic true story of the Hindenburg in a film with the working title: Blowing Up Real Good: Oh, The Humanity! Isn’t that a fun title?”

“You’re using a real life disaster and describing it as fun?” this reporter challenged Bay. 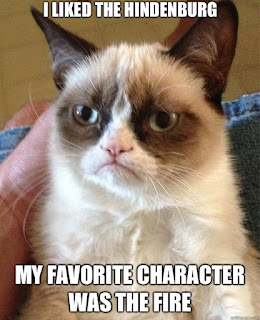 “Oh, come on, spoil sport, what’s fun if you’re not blowing things up?” Bay replied. “Now look, what we’ll have is the story of a big journey across the ocean. Now I know, the experts will tell us that we have to have a German cast and German actors and all that, but really, how will Germans in the lead play in Illinois? Answer, it won’t. So screw staying factual, let’s think American characters in the lead. With a crazy saboteur and the explosion to rival all conventional explosions and the massive death tolls and the hundreds of people on board and the….”

“There was just about a hundred people on board,” a Reuters reporter pointed out.

Bay looked confused. "Are you sure?" 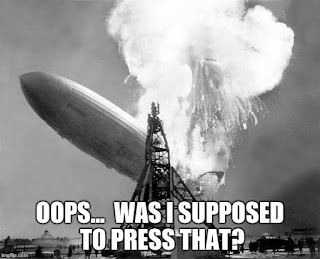 “I’d have to double check, Mr. Bay, but I can assure you that there weren’t hundreds of people on that airship. Those things weren’t built to move hundreds of people,” the reporter assured him. This reporter quickly ran a check on his ipad. 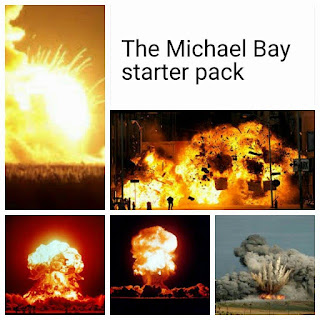 This went on for another twenty minutes until Bay was red in the face, bragging and boasting about himself. Finally he took a deep breath. “Where was I? Oh, yes. Ladies and gentlemen, it is my privilege to bring out my lead actors for this new project. First of all, playing the hero of my piece, the dashing young American doctor and spy heading for home, give a big hand for Shia LaBeouf!”

LaBeouf came out on stage, waving to the crowd, taking a bow. “Welcome! Shia is pleased to see you! You are pleased to see Shia!” Real reporters shook their heads at the demented little twit, who was oblivious to their disdain. 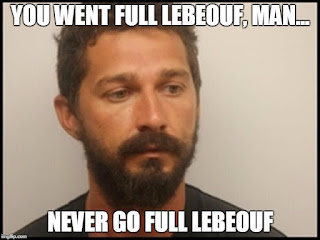 Bay smiled as LaBeouf joined him, and carried on. “And playing the requisite love interest, because what’s a big explosive Michael Bay action film without a love interest? Give it up for Megan Fox!” Fox came out on stage, dressed in the usual way- miniskirt, revealing neckline- taking a bow. She strode over to her two demented colleagues (editor: Michael Bay is not demented! You’re demented! You belong in a lunatic asylum!) This reporter, doomed to work for a cranky editor who’s bound by the terms of a restraining order to never come near said reporter again, must point out the irony of that editor suggesting he belong in a lunatic asylum, since it’s that editor who needs forty or fifty years in a place with lots of sedatives and…. (editor: die already!) 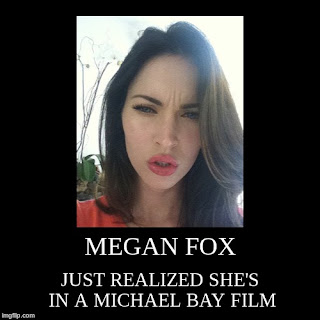 “And playing our chief antagonist,” Bay continued. “He’ll be putting on a German accent for this one, because you can never go wrong making the Germans into villains! By the way, are there any German reporters here today? No? Good. Playing the saboteur, the nefarious Max von Blud… the one, the only… Nicolas Cage!”

Cage came out on stage, stumbling a bit, carrying a bottle of scotch. “Hello! Thanks for coming out! I love working with Michael! It means I get paid, and somebody’s gotta keep Nicky outta the red, after all.” This reporter wondered if it had ever occurred to Cage that drinking excessive amounts of expensive booze and smoking cigars lit by hundred dollar bills might be one reason he infamously went into the red. 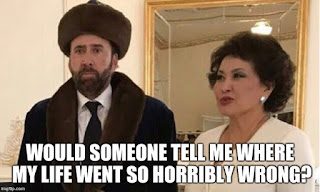 Cage joined the others, and Bay smiled. “Ladies and gentlemen, the cast of Blowing Up Real Good: Oh The Humanity! Or whatever the **** we wind up calling it. I’m also thinking Death From Above. Give us all a hand!”

The entertainment reporters broke out into rapturous applause. The real reporters shook their heads and rolled their eyes as the foursome left the stage. This reporter wished that he could be anywhere else but on assignments meant to drive him up the wall by a cranky editor who (editor: shut up! Shut up or I swear, I’ll send you back in time and put you on the Hindenburg!) 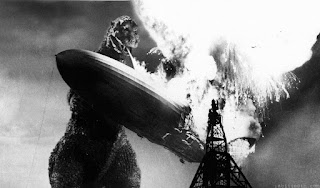 This reporter wonders if his insane editor realizes time travel is not possible (editor: what did I just say about shutting up? Shut up! Don’t interrupt me when I’m interrupting you! And don’t bring scientific fact into my fantasies about your horrible death!)

For the record: if anything suspicious happens to this reporter, the authorities need merely to point their suspicions squarely at his volatile, unhinged editor. 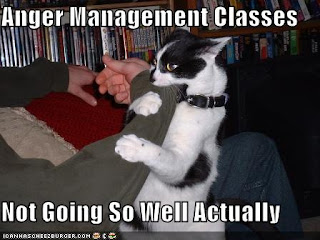