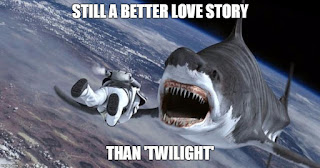 Los Angeles (CP) Sharknado will see a fourth television and direct to video movie released next month, with Sharknado 4: Brainless Tedium (this reporter’s subtitle) impending. The series, which has defied logic, common sense, and basic good taste, has featured washed up has been actors in preposterous peril involving sharks swept out of the sea by tornadoes and wrecking havoc on cities and far more. The last instalment, which featured dimwitted morons facing sharks in the skies and beyond, continued the tradition of utter stupidity of Sharknado. (editor: hey! Stop making fun of those films!) 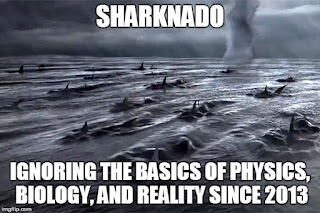 Anthony Ferrante and David Michael Latt, the creative team- if you want to call what these two do as creative- behind the series, gathered together the press at the offices of production company The Asylum. That included real reporters- as well as the pestilent dimwitted scum that consist the roving body of entertainment reporters. The former were rolling their eyes and wondering what horrid thing they had done to merit this assignment (editor: you know exactly what you’ve done!). The latter were gushing and buzzing with excitement. This reporter, given the choice, would have preferred being at a Michael Bay press conference. 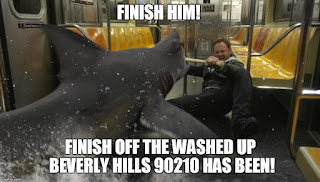 Ferrante and Latt arrived on stage, accompanied by their cast. Ian Ziering, who has managed to salvage a career left in ruins after Beverly Hills 90210 ended, has managed to star in each of these as Fin Shepherd, the bar owner turned professional sharknado fighter (this is a profession?), saving his family, the day, and even the country from marauding angry aerial sharks caught up in weather system. On a side note, should sharks who have been hurtled thousands of feet up in the air be more concerned with being out of the water or being thrown down towards pavement than they seem to be about chewing on people? Of course in a Sharknado film, logic, physics, and biology do not apply. 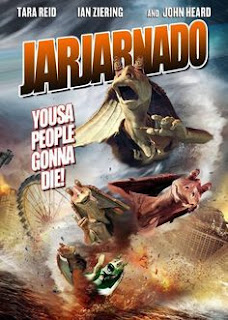 Ziering, Ferrante, and Latt were joined by other members of the cast- Tara Reid, Cassie Scerbo, David Hasselhoff, all back from previous instalments, along with the deranged looking Gary Busey, a new cast member this time out. There were also three burly security guards forming a wall between Ziering and Hasselhoff, who were both placed at opposite ends of the table. After a press conference featuring the two actors doing publicity for the third Sharknado degenerated into a fist fight, Ziering and Hasselhoff have been at each other’s throats. Hasselhoff had to have plastic surgery for a broken nose, and the actors apparently refused to film together. 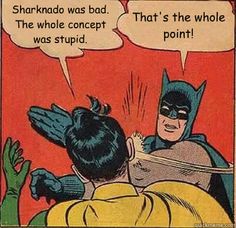 “Welcome!” Ferrante said in a jovial way, pleased to see the crowd of reporters. This reporter was busy rolling his eyes and (editor: stop disrespecting pure entertainment!) “Thanks for coming out today and help us unleash the fourth Sharknado on the public. It’s been a great run thus far of highly entertaining and not at all scientifically preposterous films, with great actors filling vital heroic roles in our stories of man versus nature and man versus man and nature chewing on everyone. And by nature I mean, kick ass sharks feasting on hapless bystanders while...” Ferrante went on and on. This reporter spent the time visualizing sharks eating Ferrante. 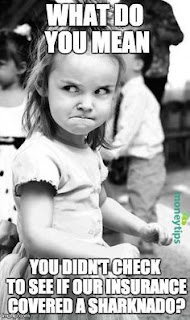 Ziering was chattering on. “You know, I owe so much to the Sharknado films. They’ve made people take me seriously as an actor. Back before I got this role, the loan sharks were ready to break my knees. It was not a good time to be Ian Ziering.”

“Is there ever a good time to be Ian Ziering?” Hasselhoff called.

Busey, who was quietly staring at everyone with a bug eyed expression, muttered, “The best way to lose weight is to put salt on your ass and go to a petting zoo. But stay away from goats, because I've seen them fornicate with a mail box.” 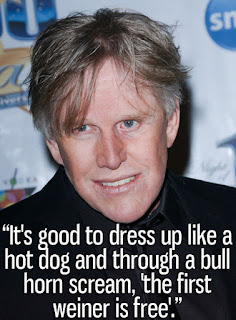 Reid spoke up to break the tension and awkwardness. “I’m as happy as Ian to be back. Granted, we can’t tell you how long I’m in the film. The last film had that big cliffhanger for my character. Does she live? Does she die? Will she live happily ever after or will she be smashed to bits? That’s for our wonderful audience to find out by watching. But of course they’ll watch. Everyone loves Sharknado, after all.” 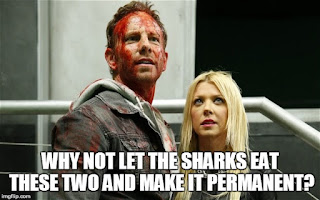 This reporter spoke up. “Does it occur to any of you that the sort of excrement you produce with these Sharknado films is contributing to the dumbing down of society?”

Scerbo looked puzzled. “I think I know what it is. Has something to do with cows, right?” 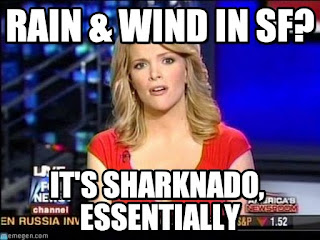 Ziering carried on. “As I was saying, I owe a lot to Sharknado. It saved my knees, gave me a regular paying gig, and finally broke me out of the Steve Sanders stereotype I’d been in for years. I can’t understate how glad I was for that. And it’s given me great opportunities. Just between us, I’m pretty sure that I’m about to be cast on the stage in London to play Macbeth. What a great role. What a great word. Macbeth, Macbeth, Macbeth. Oh wait... isn’t there some superstition about that? Something to be fearful of?”

Busey blurted out, “You know what fear stands for? It stands out for False Evidence Appearing Real. It’s the darkroom where Satan develops his negatives.” 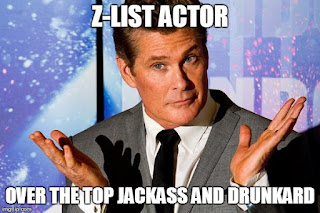 Hasselhoff sighed. “What were you thinking, casting Busey? There’s only room in this production for one truly great and truly eccentric actor, and that is me. Emphasis on great, because we all know that I’m the greatest actor to ever grace the big or small screen. I should be the one playing Macbeth!”

Ziering looked over at his onscreen father and offscreen nemesis. “Hey! Shut up! We all know I’m the best actor here, the greatest, the most outstanding. You’re just the washed up nobody who gets drunk and wolfs down cheeseburgers and gets it all caught on video.”

Hasselhoff turned, glaring at Ziering. “You take that back, you punk.” 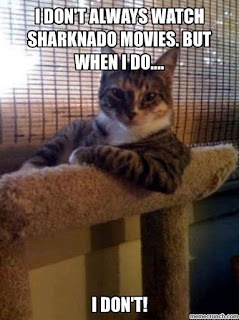 “Why, you....” Hasselhoff burst forth from his chair, getting past the security guards and launching himself squarely at Ziering, knocking him off his chair, the two falling off stage, grabbing each other by the throat. “I’ll kill you!” Hasselhoff yelled.

“Washed up drunk!” Ziering countered, getting in a couple of extra punches.

The guards rushed in to pull them apart, struggling to get the two z-list actors under control, but not before Ziering got one last punch in. Hasselhoff screamed. “My nose! My nose! The bastard broke my beautiful nose again!” 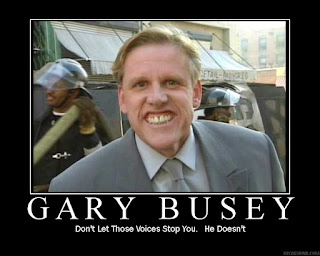 The two actors were hauled away, while Reid, Scerbo, Ferrante, and Latt left the stage, looking sheepish. Gary Busey was left behind, still staring at everyone with that deranged, bug eyed expression. Then he spoke, his voice entirely reasonable, even if his words were not. “The thing about taking pictures of me in daylight, you will not see my teeth, because I am a vampire with a day pass. You should get some duct tape to cover your neck and you’ll be safe from me.”

Busey then got up, walked calmly out of the room, and was last seen chasing squirrels in a nearby park. In this reporter’s opinion, he clearly needs intensive psychiatric care, something that this reporter’s cranky editor could benefit from (editor: I’m feeding you to the sharks when you get back) 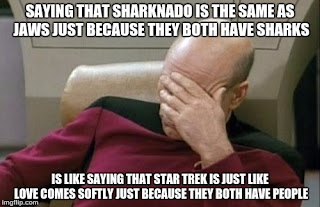