An Irritating Detective Versus Explosions 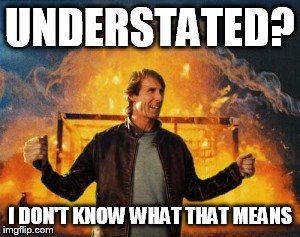 Los Angeles (AP) Reporters were summoned yesterday to the headquarters of Digital Domain, home base of director Michael Bay, whose endless explosion prone movies have included the Transformers franchise and Armageddon. The director, who has an endless number of movies in production, some of which may or may never see the light of day, had yet another announcement of yet another film concept- film, in this case, being a word used generously, since Bay’s general output tends to be more or less rated as dreck.

There were a few real reporters on site, such as this reporter, who has been doomed to cover pointless press conferences by egomaniac directors simply because his editor hates him (editor: with good reason, you bastard! How dare you laugh at a family funeral!). This reporter wonders endlessly why his cranky editor wanted him to turn up at a funeral for someone this reporter didn’t even know, and... (editor: I’m going to have your knees broken, you smirking ****!!!!!). 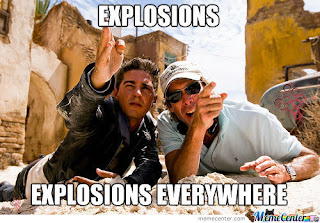 There were also the entertainment reporters, those ranks of nitwit fools who think the world revolves around Hollywood, are totally out of touch with reality, and really need to get slapped around by a grumpy Mountie. They were abuzz about the impending announcement, some speculating that Bay was going to direct a new version of Ben-Hur. The few real reporters rolled our eyes and wondered how long we could put up with this nonsense.

There was a full length mirror on stage in the auditorium, by the podium as usual, and a spokeswoman announced the arrival of her boss. Bay came out on stage, always looking like Michael Bay- the usual dishevelled hair, the few days of stubble, the blazer over jeans and a t-shirt. He waved, smiling like his usual idiot self, laughed as he strode across the stage, and gazed at himself in the mirror. Finally he took to the podium, and started to speak.

“Hello! Thank you for coming today!” Bay told the reporters in his usual obnoxious tone. “But of course you came! All of you want to know what I’m up to. And so do your audiences and readers! After all, anyone who has the slightest discerning taste loves me!” 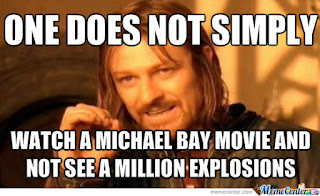 This reporter rolled his eyes and sighed in dismay. Entertainment reporters could be seen gushing. Bay carried on, totally oblivious to the contempt from the real reporters. “You know, I’ve told many tales over the years as a director. Epic action with humour and explosions and hot babes waxing cars and explosions and did I mention the explosions? But I’ve never done a mystery. Until now.”

He smiled in that dazed, deer in the headlights way of his. “Okay, so there’s a character out there that I’d always wanted to make use of in a film. Now when the actor himself was alive, he told me to go to hell, that he’d never work with me. But he’s dead, so I’ve got clearance to do whatever I want with the character. Hence my next working film, in the long list of projects I’m working on, will be... Columbo: Just One More Explosion, Sir. Isn’t that a great title?” 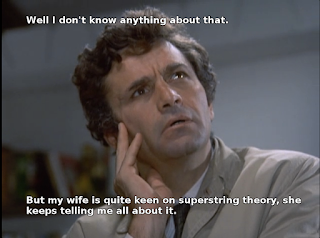 Real reporters gasped in horror. Entertainment reporters were buzzing and fawning with adoration. Bay was grinning like a loon. The classic television detective, the seemingly bumbling cop who spent his time irritating murder suspects and putting the pieces together, was played by character actor Peter Falk. The role was his signature character, played first in the 1970s and then later on in a series of television movies starting in the 1990s. One might wonder how the lieutenant never seemed to get promoted- did he run over the police chief’s foot with his car at some point? This reporter could relate, what with a cranky editor who keeps punishing him over nothing (editor: go to hell, the sooner the better!).

Still, as much as the character came across as slow witted, one always knew there was a devious, clever mind behind the facade. And Bay was going to desecrate such a beloved character? (editor: hey! Stop insulting Michael Bay! I love his films!). This reporter shook his head, wishing he could be anywhere else right now. 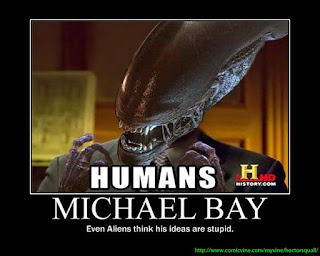 “And there’s only one guy I would want playing this character,” Bay started.

“No, but he’s in the cast,” Bay confirmed. “Ladies and gentlemen, playing Columbo... Nicolas Cage!”

The actor stumbled out on stage, smoking a Havana cigar and carrying a bottle of vodka. “Hello!” he called out, waving. “This is going to be so much fun playing the great detective. We’ve got ourselves the same model of car, the same type of trenchcoat, and I’m already getting started on smoking cigars too, because everyone remembers Columbo for his cigars. You know, Mike, it occurs to me that those anti-tobacco people might be mad at us for having a protagonist who smokes.” 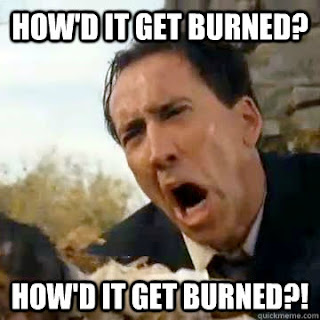 Bay shrugged. “So what? Now then, that brings us to the murder suspect, because the audience always knew who the murderer was in these things. He’s a golf pro, because hey, I’ve always wanted to make a golf movie too, so why not go two for one? He’s not only a golf pro, but he’s also an expert in explosives, because let’s face it, what would a Michael Bay film be without explosions? Ladies and gentlemen, say hello to Shia LaBeouf!”

LaBeouf came out on stage, waving, the usual vacant look on his face. “Hello! You have come to see Shia! And Shia approves of your presence!” he called out. This reporter, who had been rolling his eyes too many times already this day, did so again. That twit LaBeouf was still speaking in the third person? (editor: hey! Leave Shia alone!) LaBeouf joined Cage and Bay, both of whom were smiling in a demented way. 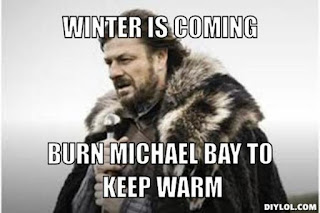 “This is going to be epic,” Bay boasted. “A game of cat and mouse between Columbo and his suspect. Endless irritation of the suspect by just one more question. Oh, and explosions after explosions. Because one can never have too many explosions. This one’s going to be the biggest murder mystery of all time! Thanks for coming!”

Bay left the stage with his actors. The entertainment reporters were deliriously happy. This reporter and his few real colleagues shared our dismay and grievances at being subjected to this kind of nonsense. All in all, we agreed that it was too bad Bay wasn’t the victim in a Columbo episode. And we also agreed that Peter Falk must be rolling over in his grave right about now. This reporter, doomed by a cranky editor to... (editor: I swear to God, I’m going to be attending your funeral in three days if you don’t shut up right now).

This reporter shook his head, coming to the conclusion that his cranky editor really has profound anger management issues, and could benefit from spending the rest of the day watching unbearably cute cat videos. Or smoking a whole lot of weed. 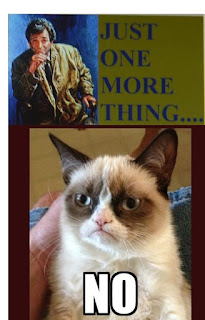 Posted by William Kendall at 10:17 AM